No real break in sight for the temperatures, at least it is getting a little cooler at night.

We got out early Saturday to run a couple of errands. Willie in his raised canopy now decorated with Christmas lights. Nothing but the best for him. 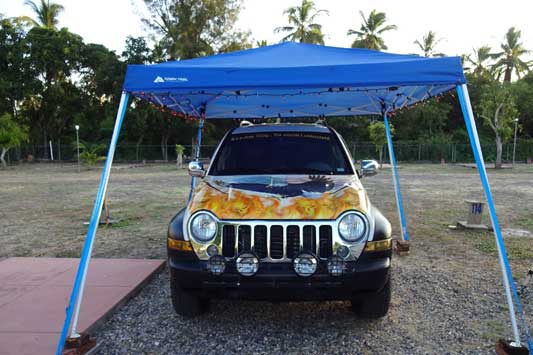 During the summer Mazatlan was hit by several storms with high winds. Two of the trees behind us in the campground that got hit hard. Once broke off about three feet above the ground, the other has no branches left. Our “bread/fruit” that we used to feed the birds last year blew away completely.

Our main errand was clear across town, almost to the harbor so I took several pictures on the way over there. Heading down the main road towards The Golden Zone. New palm trees in the center divider and the grass is even trimmed. 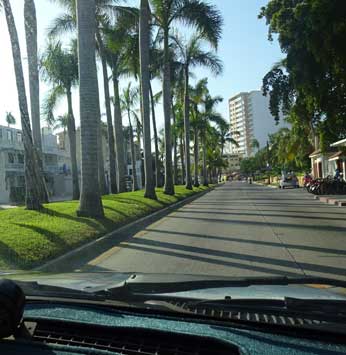 Right in the middle of the tourist zone there used to be a Dairy Queen and about eight little stores along here. Now it is a big construction sight. Going to be a high rise of some sort.
Kind of taking away the flavor of the town. 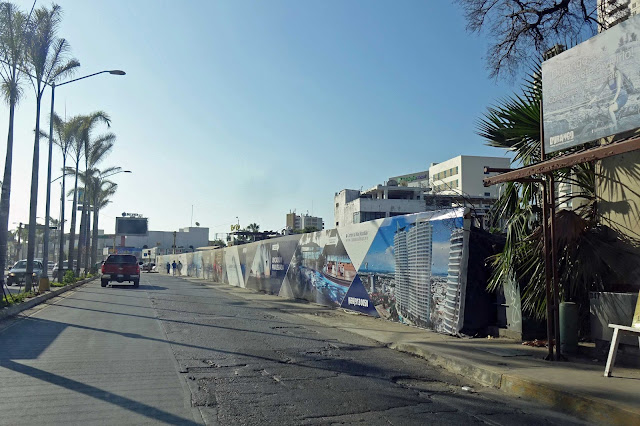 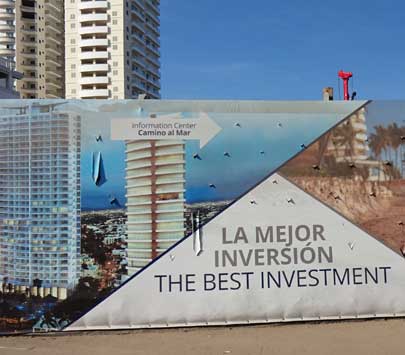 You never know when you’ll come to a mess in the street that you better be watching out for. They are digging the street up to put in new crosswalks made of tiles. 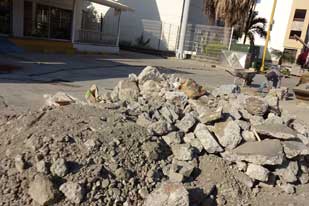 On to the Malecon. Part of the reconstruction is finished. New sidewalks with new walls between them and the beach. Also a section for bicycles and roller skaters. Sorry the pics aren’t better but we were driving into the sun again. 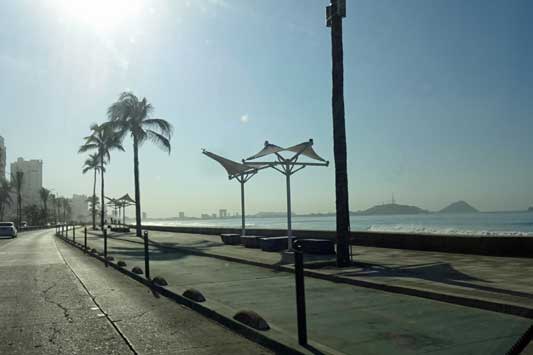 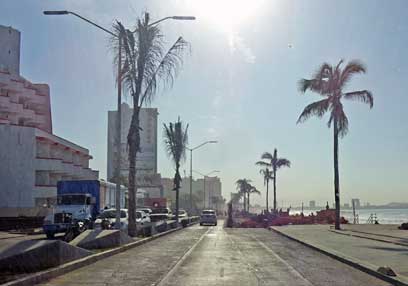 A couple blocks further and the construction is in full swing. All traffic is now in the north bound lane. Very narrow lanes. Lot of men and equipment working 24/7. It is “supposed” to be done by the end of this month. But it isn’t even half way done… 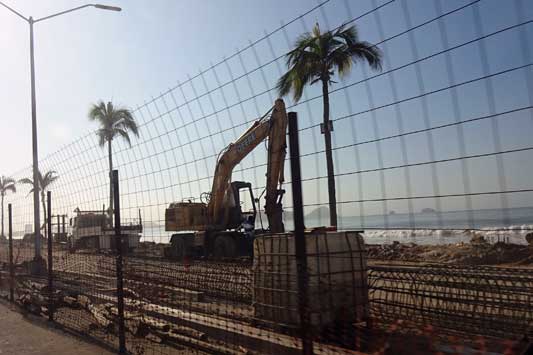 There are restaurants on the beach here so their ice is delivered to the sidewalk. 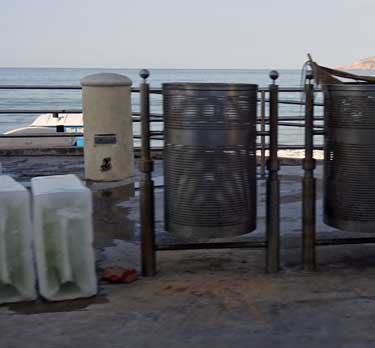 Here we are in the older part of town along the ocean. We used to be able to continue up this street to go to a really nice look out point to watch the sunset and see the cruise ships leave. Hope they open it soon. 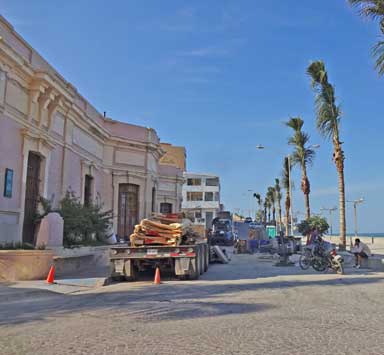 Our first errand was to drop off two of my cameras to the repair man to get all the fuzz off of their lenses. We called him Friday and he met us out in front of his home. I will get them back either Monday or Tuesday. 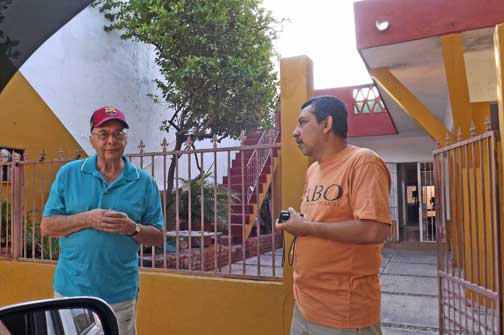 We headed into the Centro Historico to park and finish our errands. Oops – the parking lot we always parked in was closed [found out later it is permanently closed and has been sold.] So we found another lot that used to be a pay lot but is now just drive in and park. Walking down the street to go to the watch makers. Some of the buildings there. 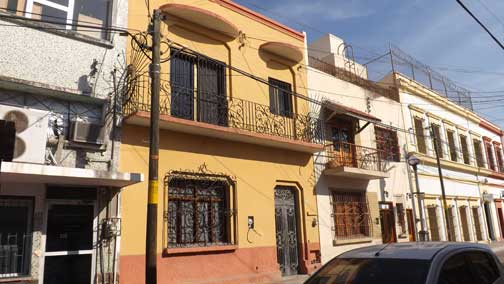 The watch maker was closed, sign said open on Saturday at 9:00 – it was 10 after 9. So we continued on up the street and around the corner to go to the optician. More ice waiting out in front of a bar. 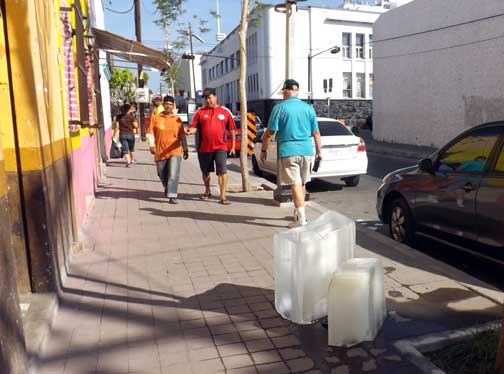 The optician wasn’t open either, so back to the watch maker, now 9:30 – still closed. Try again another day. Then we headed to the bakery to either have breakfast and buy cinnamon rolls or just buy rolls. More streets torn up. 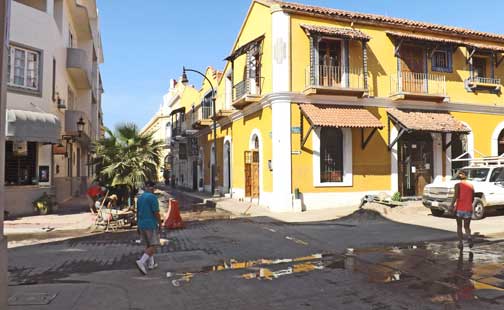 Decided to just buy the rolls – They are delicious especially at 20 pesos each 19 pesos – US$1. We got four of them. They are huge. 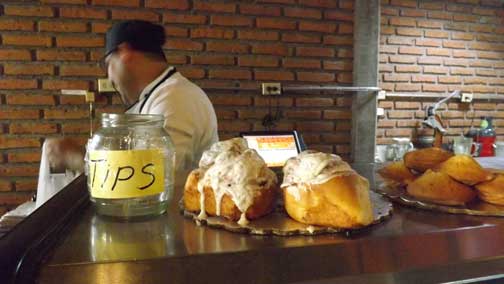 Back in the car we were going to go up by the central market – this is the main road in front of the market which is a couple of blocks up. Oops can’t go that way either. Wonder what the buses are doing they all used to go this way. 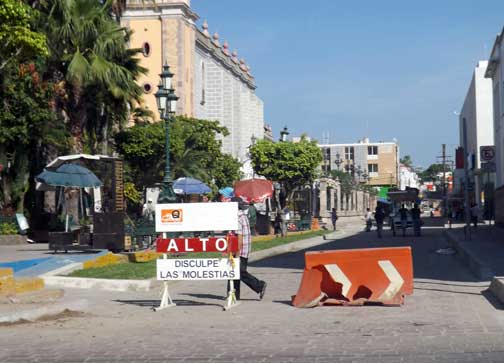 Finally ended up back on the main road along the Malecon heading north. Not kidding when I say narrow streets. 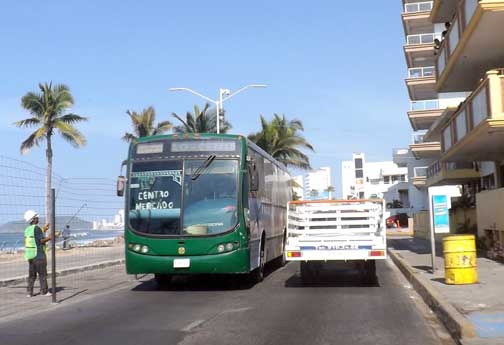 And then especially when part of your lane is blocked by more construction. 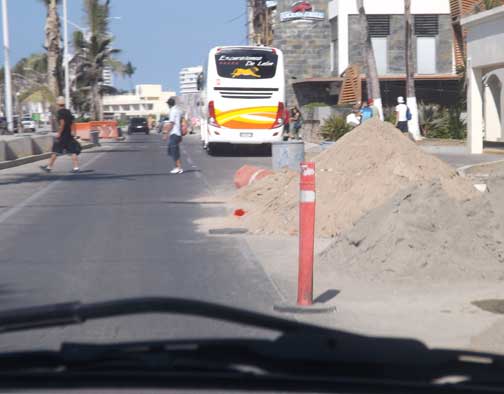 Back almost to the Golden Zone – That is Valentinos in the far right. Notice the “architectural interest” in the center divider. 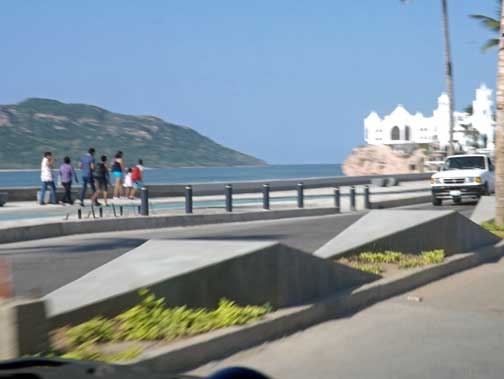 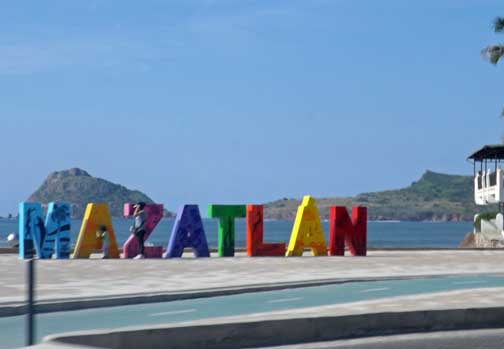 Back in the Golden Zone – watch where you are going, part of the lane is torn up. 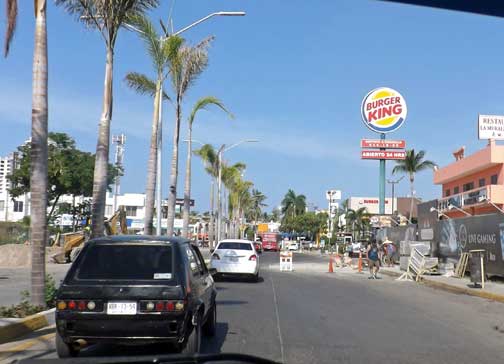 Finally made it home then went to Torres to have a late breakfast. Discovered they have cut down “The Bishop’s Balls” bush. OMG! 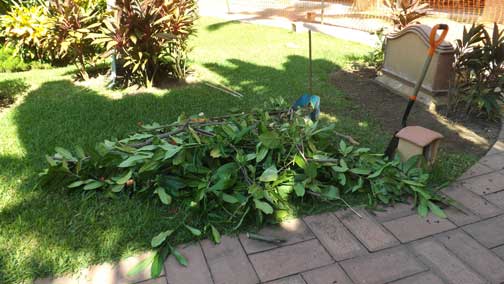 Just as an afterthought – the city is doing all this construction but they still haven’t put an arm at the railroad crossing where a bus load of people were killed a couple of years ago. That was supposed to be done a year ago.
The first day we were here people from TelMex – an Internet company came because we want to get cable internet installed while we are here. They seemed very professional, needed a copy of Bill’s passport which we gave to them.  Okay, okay – and we’ve never seen them since. No idea what is going on.
We called the mechanic who has done a lot of work for us on the car and RV and he was here by 11;00. Discovered what was wrong with the AC in the Jeep and will be back Monday morning.
Also called the man who did the upholstering in the RV and he came right over. Bill wants a cover for the hitch, windshield wipers and the side mirrors. And modify Willie’s bankie to fit. He’ll be back in a couple of days with everything done.


Then we went to my favorite vendor in Cerritos and I found a blouse that was a color I didn’t have. And we found a place where I can watch the NASCAR race. Also picked up our nice clean laundry
Hope I can manage the weather long enough to see the race. Be watching from an open air restaurant.
Posted by Carol and Bill at 6:48 AM

Nice report, Carol, you said it so clearly

I know the heat and humidity isn't your favorite but this past week in White Rock we have had snow and rain, LOTS of grey and rain....rain. To us, this glorious heat and sun would feel so good! Soak some us for us!! :-)

last night we went to Plazuela Machado to listen to Raphael play and sing. For that the weather was perfect!