Writing this using my TelCel MiFi – seems to be working just fine. We are in Los Mochis in a truck stop for the night. Did 230 miles, 215 on great roads – and 15 on the most horrid road we’ve been on. Paid US$58 for the privilege. I think at the last tool booth they should have sent people with screw drivers inside to put everything back together. That part of the road was like being in a 7.8 earthquake. Not kidding.
Got up this morning and gathered up and stored a few things then went out to breakfast at Chihauhaus. Had French Toast and Bacon. I hadn’t noticed this mural before so took a shot of it. 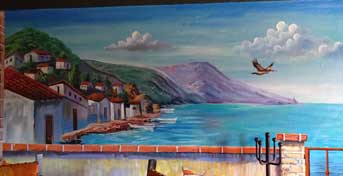 Then back to the RV to finish getting ready for the road. I’ve been reading other people’s blogs and comments about the road south so kind of knew what to expect. Most of the road would be good. 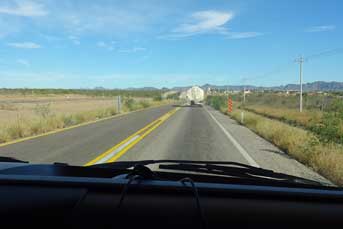 After leaving San Carlos our first stop was for gasoline –it is about US$3.25 – more than we’re used to paying. The first station we stopped at didn’t take US credit cards, good thing we asked first. So on to a bigger one – no problems there. Filled up and headed south. About two miles into it was the first toll booth. But don’t mind paying when the road is this good. All new concrete with nice wide shoulders. 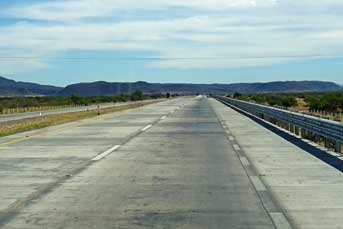 We had a few times where we switched from the south bound to the north bound lanes, but mostly we stayed in the newer south bound lanes and the north headed vehicles came to our side. When we were on the north lanes, they weren't as good, mostly asphalt.
Going a little town. If someone is selling something from the middle of the street SLOW down there is a tope there. 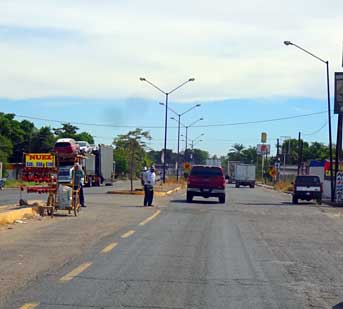 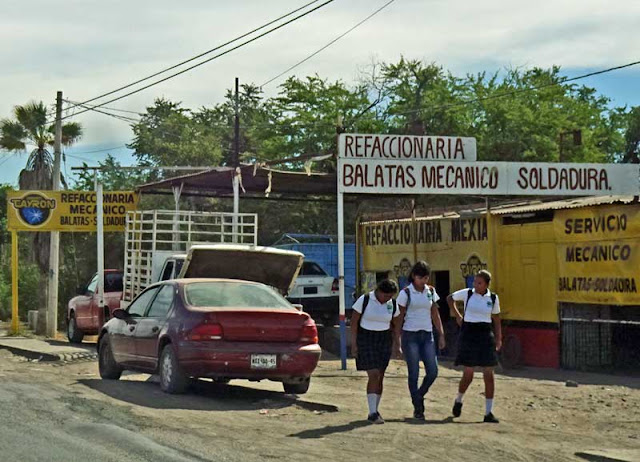 One of the detours, they are pretty well marked and easy to navigate. 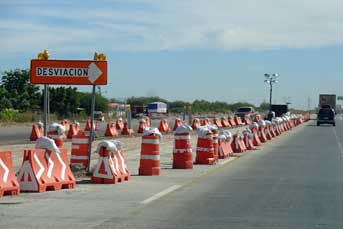 There is now a road that by passes the city of Obregon. We saw the sign for it but couldn’t figure out how to get to it. Looked like we would have had to make a U-turn, but didn’t see any place to do it. Maybe coming home we’ll figure it out.
More of the fancy letters going into Obregon. 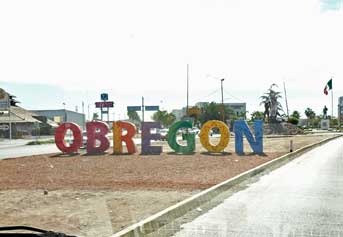 Have to remember the guys in the intersections that want to sell you something or to wash your windows. Didn’t used to have to worry about them with the Alfa, but they can reach the windshield in Arvi. No thanks. 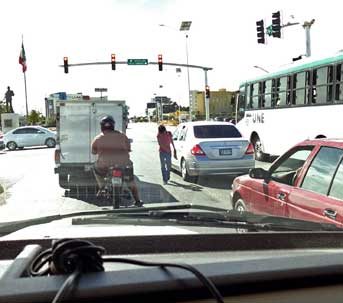 I am glad to say that the way through town has been repaved – well almost. So much easier on the nerves. 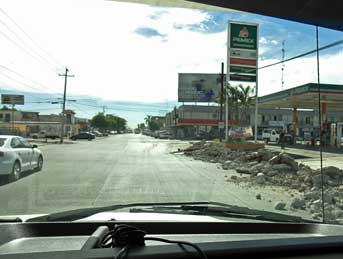 All nice concrete up to and through Navojoa – which also has the nice letters. Need to get a better picture on the way back. 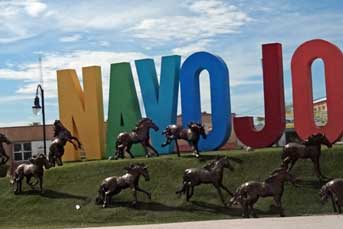 It looked like both the roads into Huatabampito have been repaved, again may be on the way back. Way to windy today to want to go anywhere near a beach. The wind was a problem the whole way. Especially on the narrowest parts of the highway. I had read that south of Navojoa just before the state line the road was really bad. That was an understatement. It was PURE HORRID. And because it was two way traffic, no driving down the center or in the left lane to miss some of the bumps. 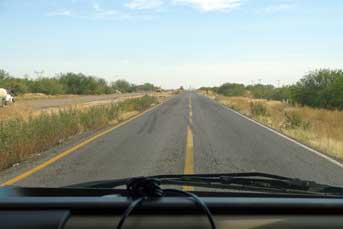 I have a video of part of it but will wait until I have better Internet. Going south from about kilometer 101 on to the state line – slow way down and be careful. Especially going through the little town of Estación Luis. Very narrow lanes, no shoulders and thousands of topes- well maybe not that many but at least ten or twelve. And not smooth round ones, narrow square ones. 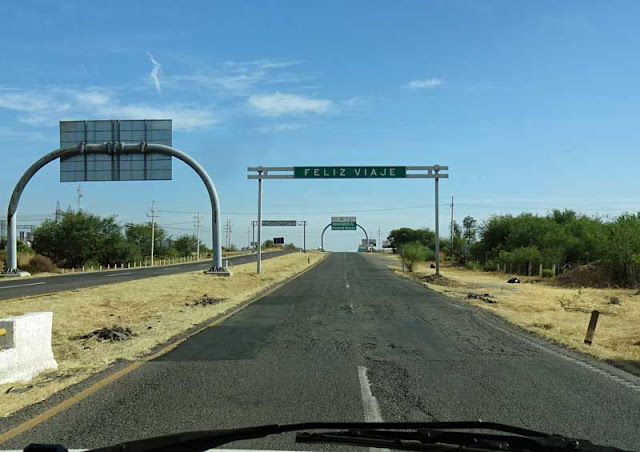 Once out of Sonora the road got better again. Not concrete but good pavement.
We saw cattle feeding right beside the highway, a bunch of teenage girls running across the center divider to wave to the truckers. And this…no idea why he was on the highway. 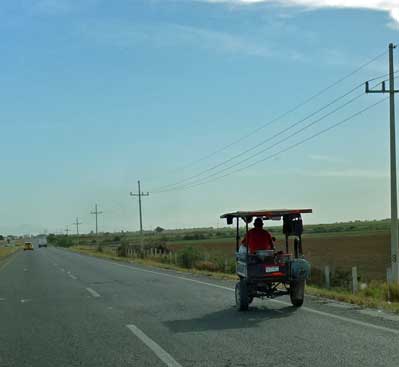 And of course the wild fire or two. You can see how the wind was blowing. 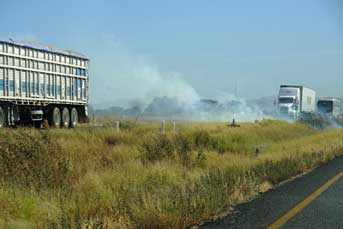 We got to the truck stop about 3:45, stopped and filled up the tank again. Always a shock the first couple of times to see the total 2273.5 WHAT?
Got parked out back, turned the generator on and cooled down a bit then went to the excellent Elba Restaurant to eat. Yes it is part of the chain that we ate in in Santa Ana. Good food, big variety.
Here is a poster of their signature dish a 450 gram milanesa. They call it Elephant Ear. 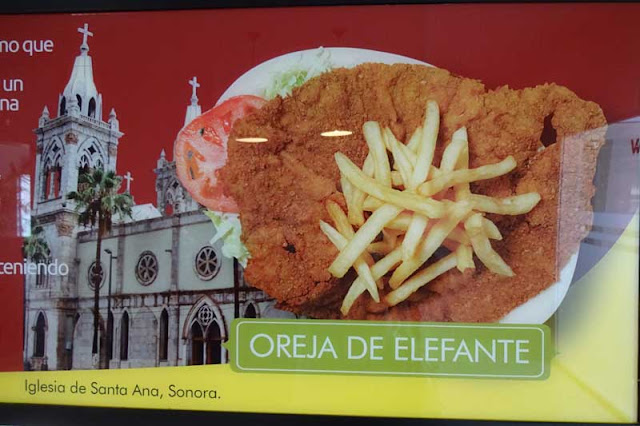 The interior of the restaurant. 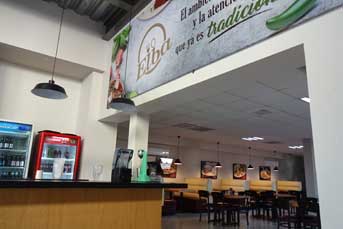 Our order – we split one of the big ones (I had already cut my piece off of this) and Bill has enough left for a sandwich later or tomorrow. It comes with French fries and we order a bigger salad to split. Along with my ice tea US$14.60 including tip. We are both stuffed. 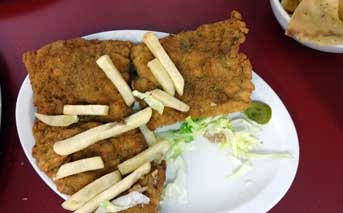 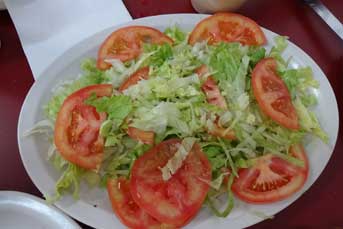 Here we are in the parking lot. It has a high fence and a locked gate and guard during the night. 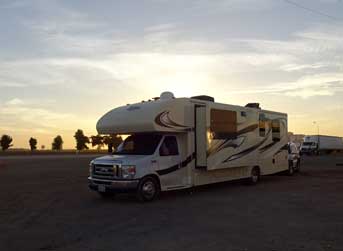 We will be in Mazatlan next time I write.
Posted by Carol and Bill at 6:03 PM

Hi buddy - What Pemex number do you stay at in Los Mochios? We have had two really bad experiences at Pemex's in Los Mochios so we tend to blast through the town. It would be nice to know there is a good safe one to stay at to cut that drive from San Carlos to Mazatlan in half.....