We manage to pass the time.

It has been weird here. When we are home Bill is always up way before me, by that I mean usually around 4 a.m.  I roll out around 7/8 o’clock. Here I’m up about 6 and he sleeps in till 7 or 8. He goes to bed much earlier than me. Wonder what it is – the bed? Maybe just the being here.
Different way of doing things – gotta love it. Here is the cable for our Internet. It was run along the fence in the back ground then across the ground to our rig. Think that could be done in the US? NOT. 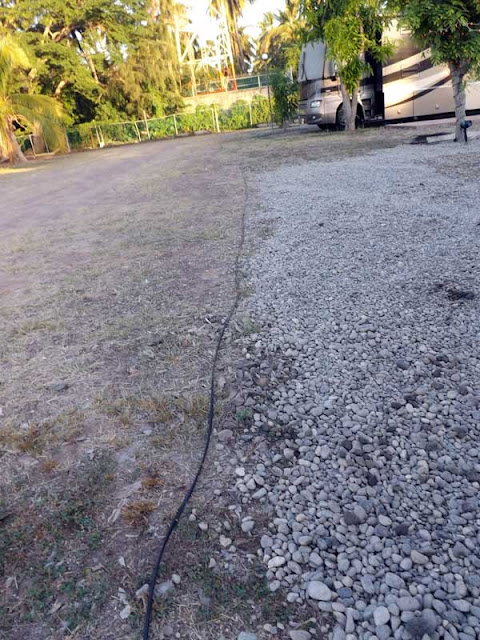 Eventually it will be buried under the gravel. Someday. Manana.
Mechanics were here early – about 9:00. One finished putting the Jeep back together the other, the main man changed the oil and filters in both the Jeep and the Jayco. 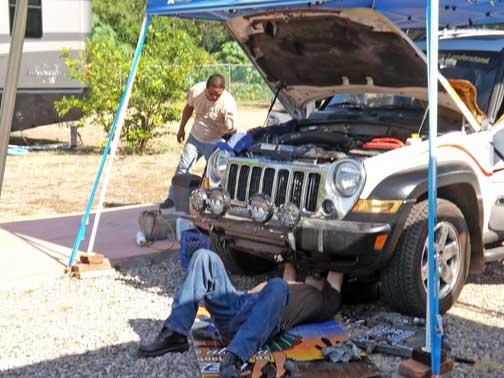 Before leaving home Bill bought all the oil and filters needed. He also bought new struts for the back window in the Jeep. They were installed too. 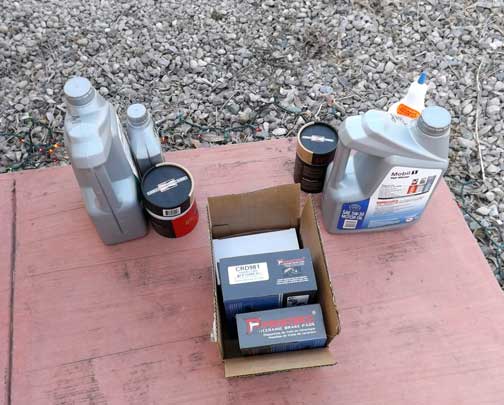 They finished around noon. Bill figures they worked for about 12 hours to get everything done. Total bill 5300 Pesos – at today’s exchange rate US$ 280. And the AC works wonderful! Better then it has in a long time.
The upholster hasn’t returned yet but here is the hitch cover he made. Will keep the worst of the weather off it. When we store it he usually wraps it with foil a towel and duck tape. Much better look now. 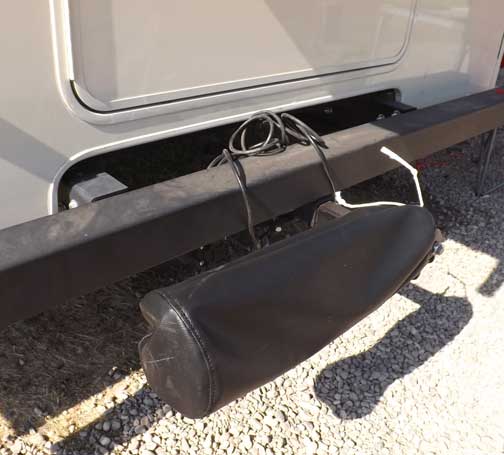 The fruit/vegetable truck comes every Wednesday morning. Everything on it smells so good. We got 2 beefsteak tomatoes, 6 eggs, 1 avocado, big head of romaine lettuce, basket of strawberries and six tangerines. 170 pesos or US$8.50. There was also a truck selling fresh shrimp and fish. 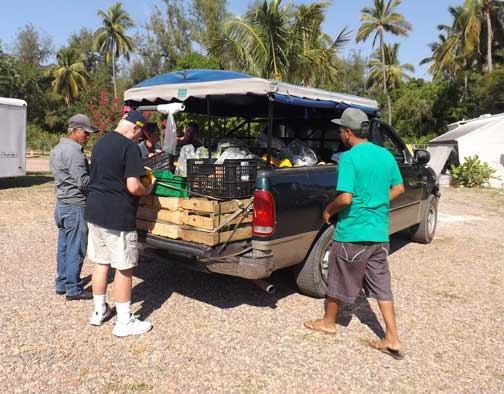 Later we took the Jeep out to check it out. AC works better than it has in a long time and no rattles or pieces missing. First stop was Home Depot where we got some dowels for the bread/fruit tree and Bill got another “Star Shower” light. Just like home all decked out for Christmas. 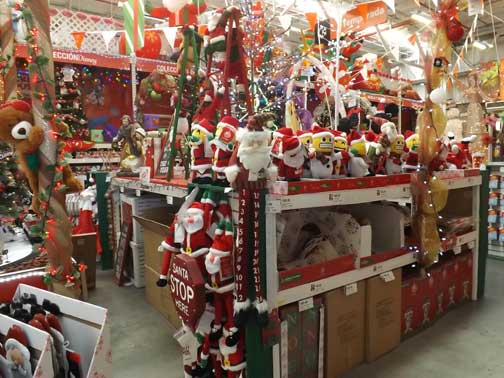 Leaving there I noticed the neat letters signage in front of a small business. The letters are smaller then when used for city names. 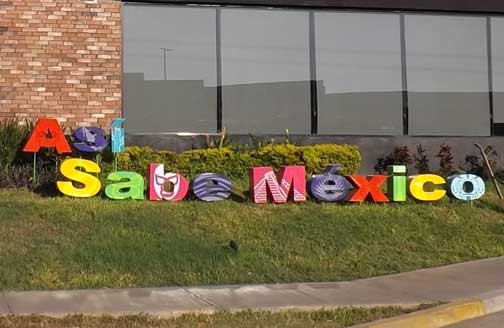 While sitting at the red light we noticed that the opposing traffic was being entertained by a bunch of young people do acrobatics. She is on the shoulder of a guy. Somersaults and everything. 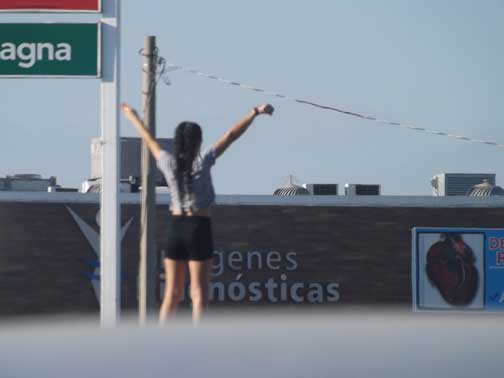 Then to the market to get some bread for the tree, though I haven’t seen many birds around.
And stopped at a new, for us, restaurant – Rincon de Nasha. 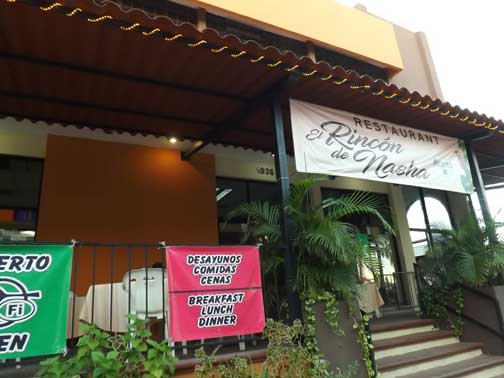 Bill had fajitas said they were the best he has ever eaten. I had quesadillas. Both of us had soft drinks. About US$15 with tip. They have a good breakfast menu we will have to try. 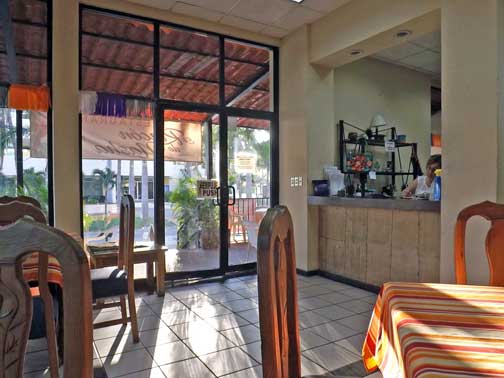 Bill putting the bread/fruit tree together when we got home. Will probably change it some if the birds show up. 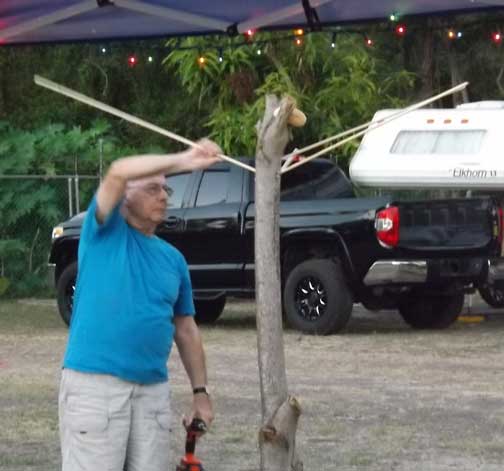 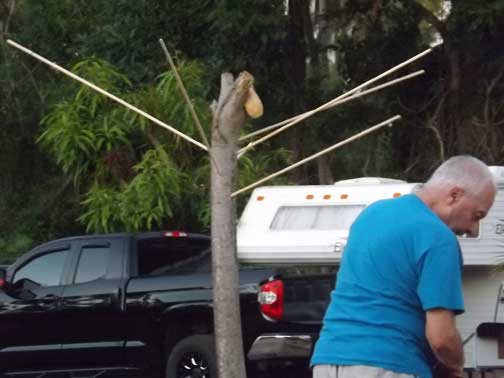 Today we have an early start for a bunch of errands. Need to geet them done early before its too hot to move around.
Posted by Carol and Bill at 5:57 AM

Thank you for sharing such valuable and helpful information and knowledge! This gives us more insights and inspiration. Looking forward to seeing more updates from you.