Wednesday morning four big rigs left the back part of the campground. Unfortunately one of them took the water pipe with him. So no water for a while until Raphael, the campground handy man and all around terrific person, got it fixed. Don't know if the driver of the rig stopped in front and told them what he did or if he just took off.
Unfortunately in the afternoon 25 big rigs in a caravan came in and parked here in the back with us. Almost every space back here is taken. And a bunch of them have barking dogs. Glad we are leaving Friday. Crap, just found out they are going to El Fuerte on Sunday. That is where we planned on going Saturday after spending the night in a Pemex - truck stop - in Los Mochis. The "campground" in El Fuerte is the parking lot of a small motel. We use an extension cord to plug into an outlet in one of the motel rooms. Now don't think we'll go there.
I puttered around in the cupboards and closet re arranging things for travel. Amazing how much we move things around when staying in one place. Bill has been re arranging the outside compartments to accommodate the few things we bought - several ceramic planters for home.
Just a couple more of the repainted building in Centro. 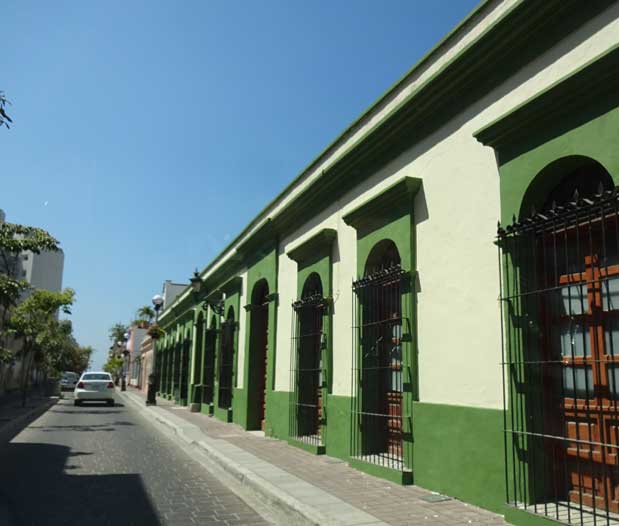 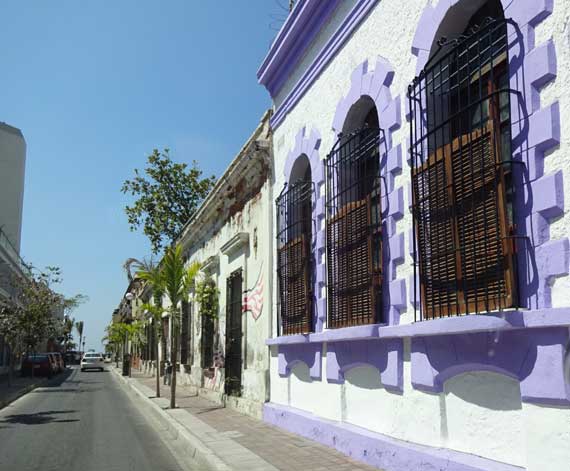 After leaving Centro we took a drive through the Golden Zone. Lots and lots of the cruise ship people there. We barely had room to pass this hop on hop off bus loading up. 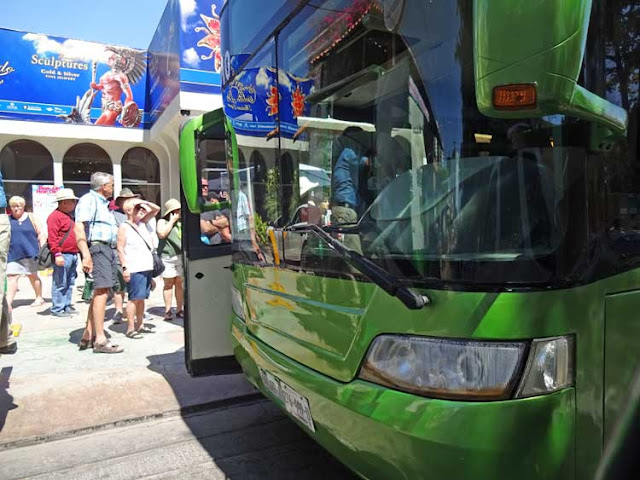 Later that night at home Bill snuck this picture of me. I'm reading my nook. Maybe this is why my back is giving me problems. Hum....Guess I was stretching that one leg. 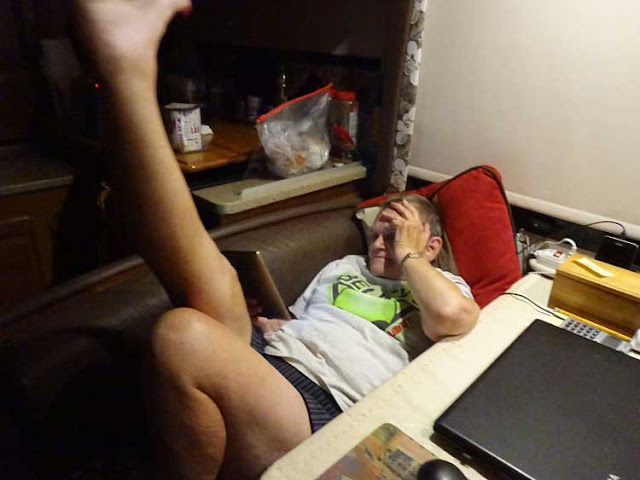 Notice this big fish being placed in this building. Coming up out of the roof. 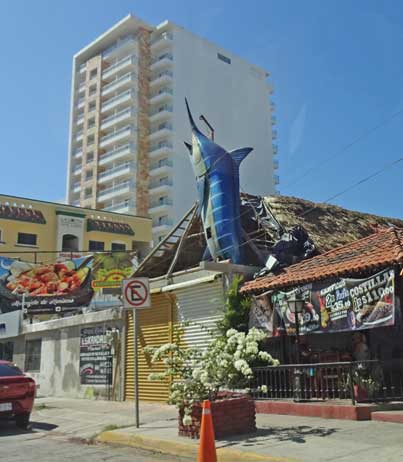 I wonder if this is the same fish just being relocated to a different restaurant. This one was down by the beach. 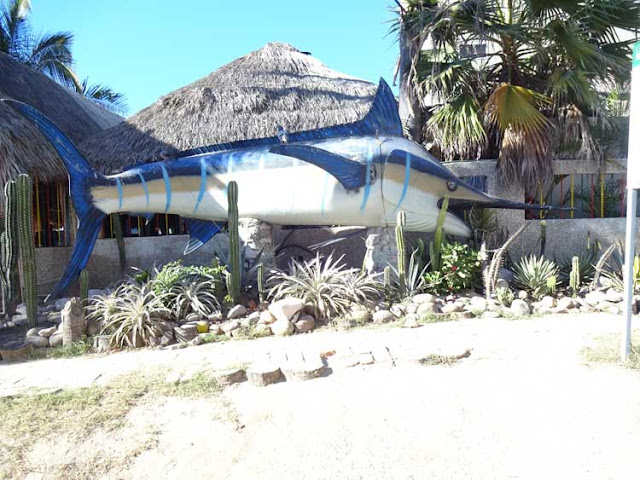 Well nuts, we were headed to Centro to have lunch in the Plazuela Machado and the Malecon IS CLOSED AGAIN. This time right at the beginning of it. All traffic diverted east. Which for us was okay as we had to go to the TelCel office to renew the GBs on our Mexican Mifi for the rest of the month. Heaven forbid I'm without WiFil. 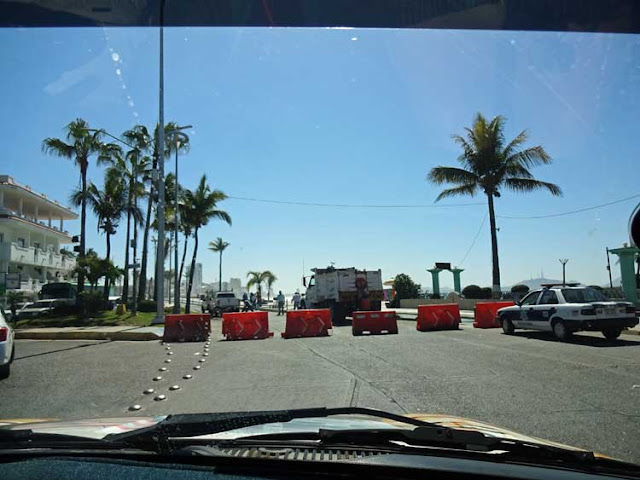 Got that done and decided the heck with Centro and ended up back at the hamburger place. Caught the very end of a Champions League soccer game and ate burgers. 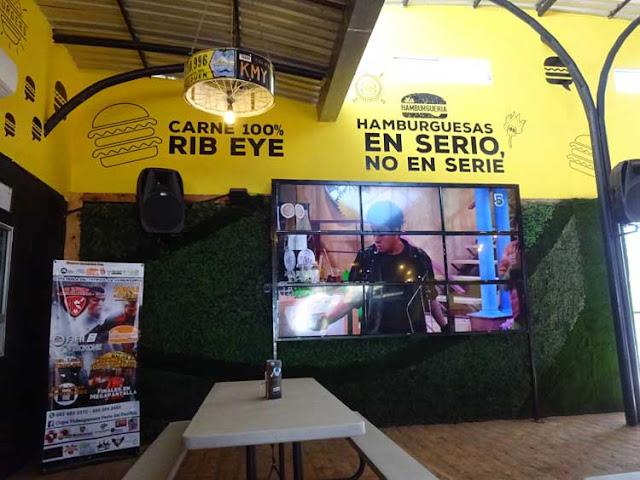 Nice size patty. But didn't get pickles and got cheese which I didn't want. Bill had a chicken burger and wasn't impressed with it. Too bad the first time we went everything was very good. 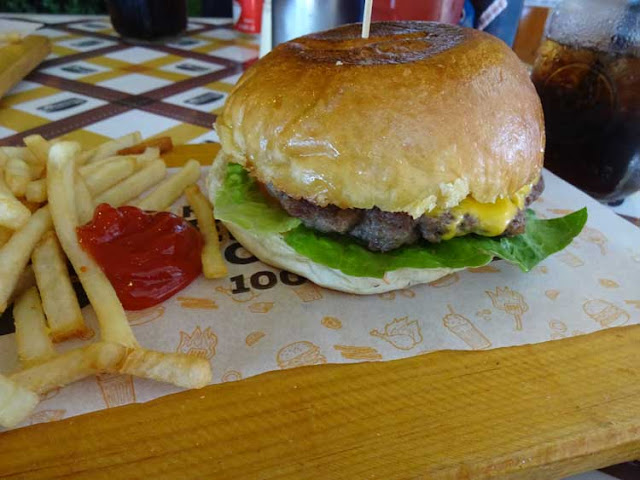 The Chicken - I've been looking at it for three years. Maybe this year I'll get it. 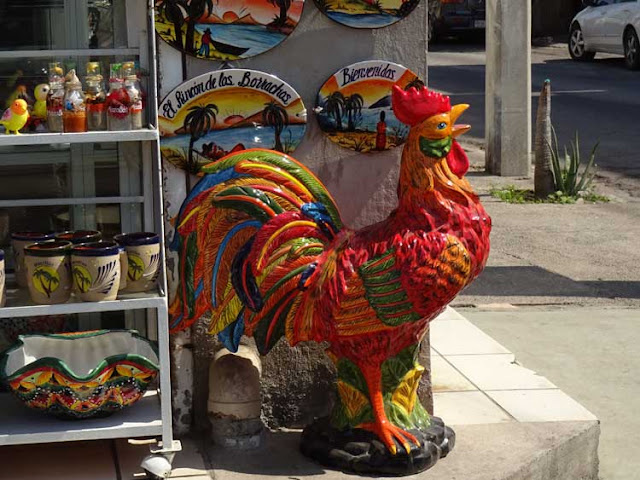 This morning, Thursday our last day here, I took a picture of the shadow of our bread/fruit tree and some of the birds on it. I have enough bread and fruit for tomorrow morning. Then they'll be on a bug diet again. 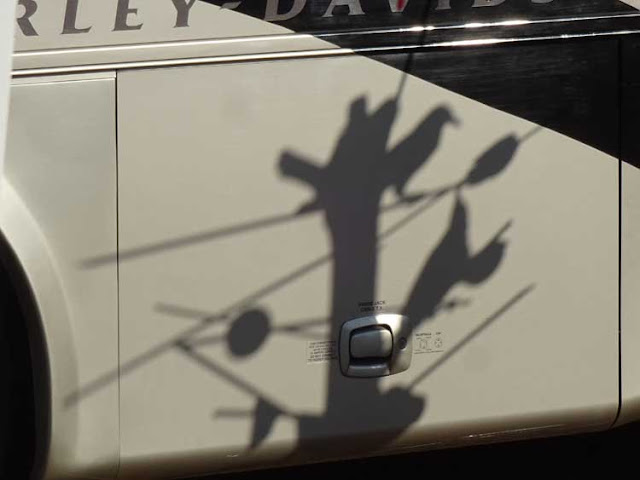 After getting some things put away we went to Torres for breakfast. I'll miss this place, so pretty and friendly. 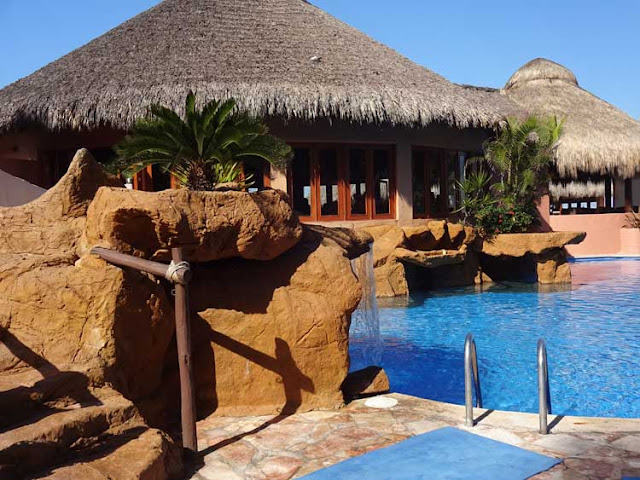 We drove on downtown and on out to the Historic District. I'd thought they were tearing this restaurant down, but now it looks like they are adding a second floor to it. Makes more sense as it was always busy. 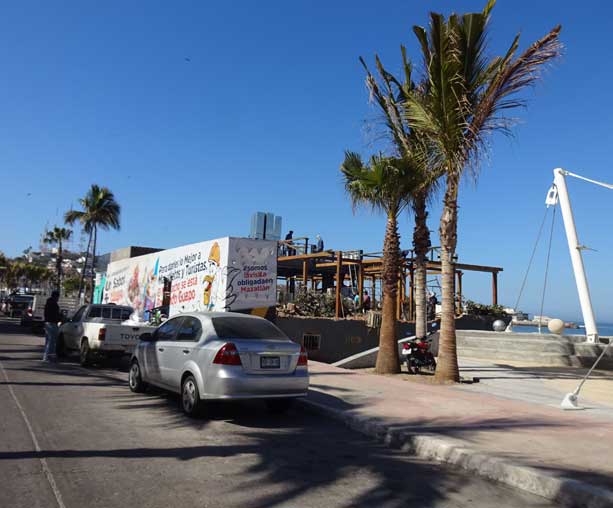 Now this looks like hard work. Hauling that what ever it is up a ladder to the 2nd story. 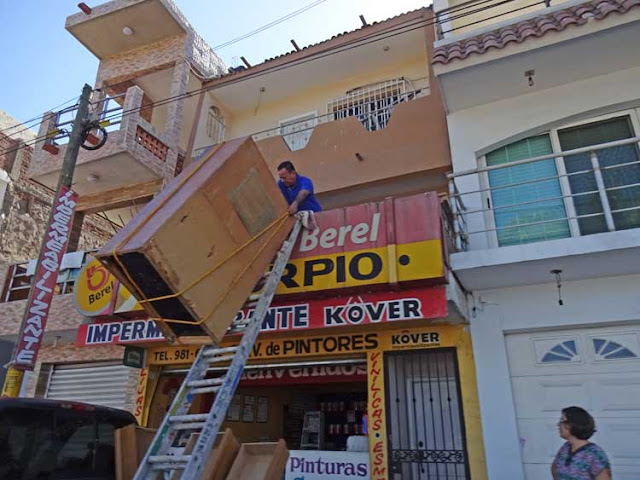 On the way home we stopped at the shop where the rooster is. Well I got the rooster - have no idea where it will ride so it doesn't get broken.
I need to stay out of this shop. Check out this hippy bus. Occupied and driven by skeletons. 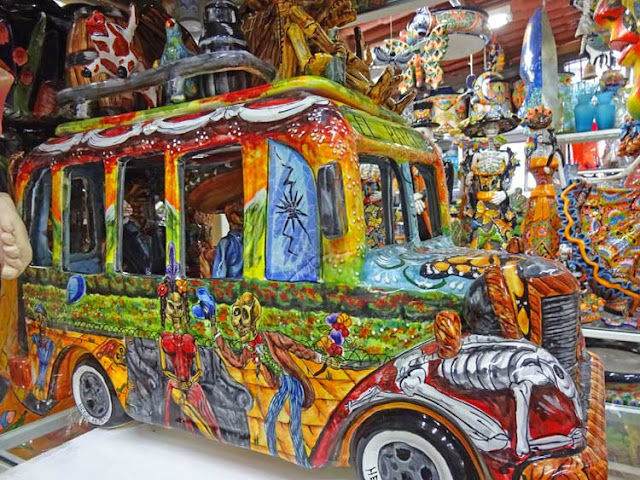 The other side. Look at the top of it. 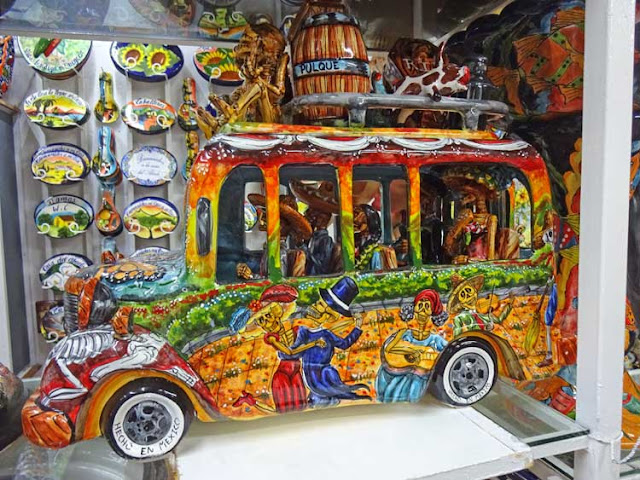 Riding on the roof. A pig! 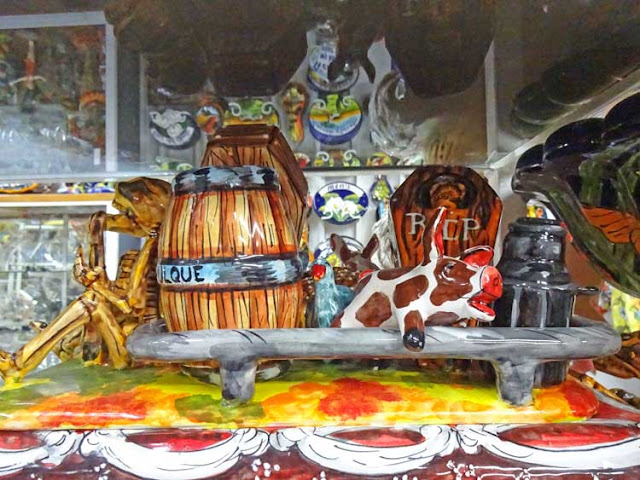 A front fender. Did not even ask the price. Don't want to know. I imagine a few hundred US dollars. 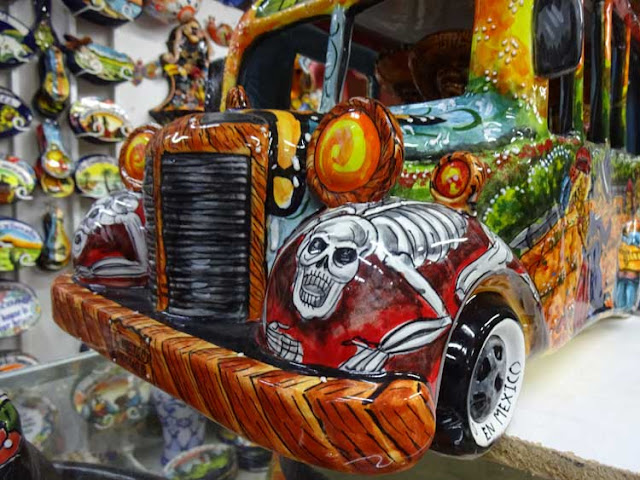 Right now it is in the back seat of the jeep. And a funny thing happened when we started home with it. As we went up the road I could here cluck, cluck cluck cluck! WHAT? So turned around to look at it. The foam wrapping around it was moving against the door and making a clucking sound. I'm sure he was saying thank you for buying me. Before we got him in the car three people walking by the shop asked if we'd bought the rooster and they had been looking at it too. 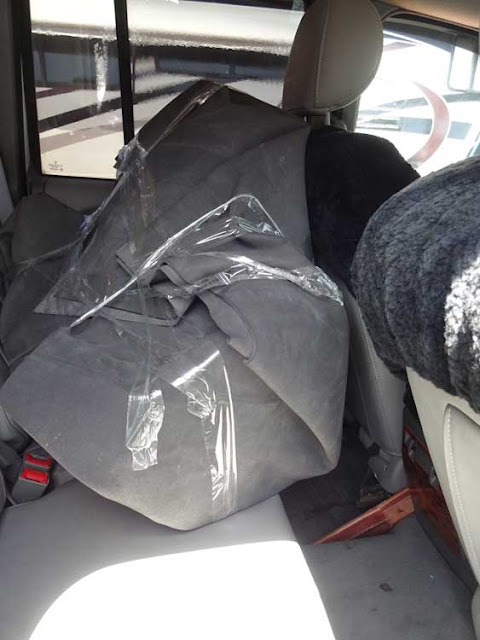 And that is about it from Mazatlan this year. All of a sudden this afternoon a marine layer moved in. Couldn't even see the trees in the back. Then a cold wind. Now it is blue sky and warm out again. 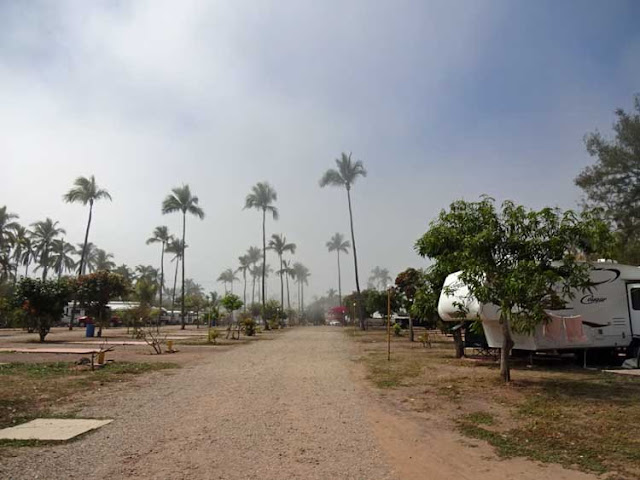 During that time we drove out to Cerritos, just to go out there, a couple of fishing boats had just come in with coolers full of red snapper. 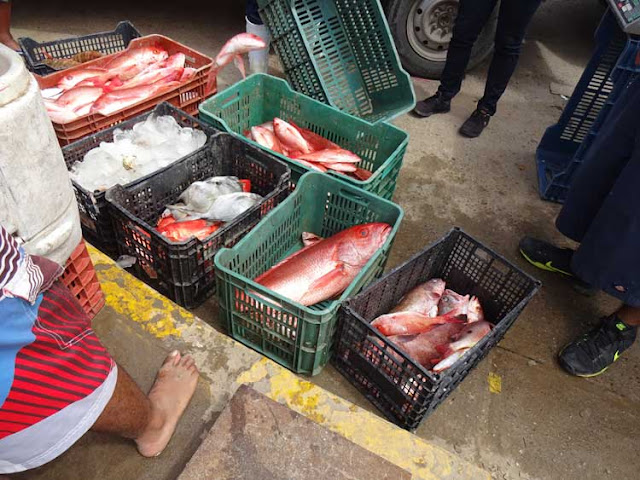 I wouldn't want to be out there in a small boat with no visibility. 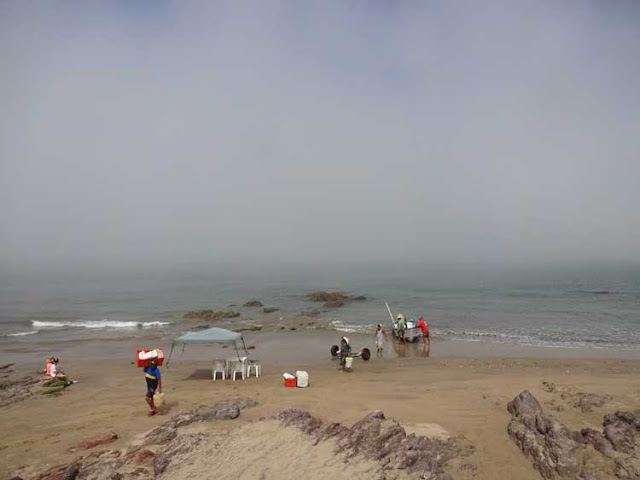 Going into the campground. 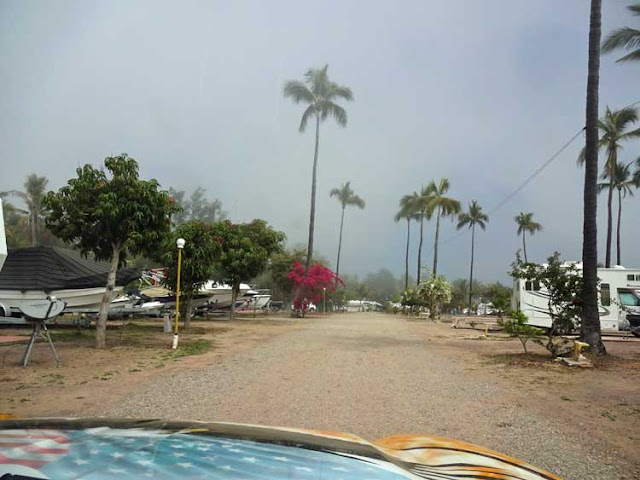 And that is it for today. Tomorrow night hopefully I'll be writing from the town of Los Mochis parked in the truck stop. If the MiFi can get a signal.

Traveling mercies for you, Bill and your rooster all the way back to LV. Wonder what his name will be?

I know you've told us the Pemex number before, but can you tell us it again, so I have it on record. Safe drive friends! Cock-a-doodle-do.....

Safe travels my friends. I am counting the days until I see you two next winter. Look forward to seeing what your up too in Vegas. Might see you this summer.
Your captured tourist.
Mark

Safe travels.
Maybe some bungee cords for the rooster. You do not want him flying on the tropes.

he is wrapped in foam and cushioned by pillows in the back seat of the Jeep. Hopefully he will be okay. Hit one tope HARD today But just the RV not the Jeep

Would be good to see you during summer - if we don't' manage to get out of town to the west coast.

#4925 - has a good Elba restaurant. on west side of south bound lanes just south of Los Mochis.