The header picture of the name is from the nearby town of Huatabampo about 15 miles inland from the campground. It was hard getting all the letters in the picture. I don't think Huatabampito would fit.
It is 7:20 and Bill is outside feeding the seagulls. One was sitting on the sand looking in the window waiting for him. Now there are about 30 out there. In town yesterday he bought 10 kilos of corn tortillas. Clerk remembers him from years past. I wonder why? 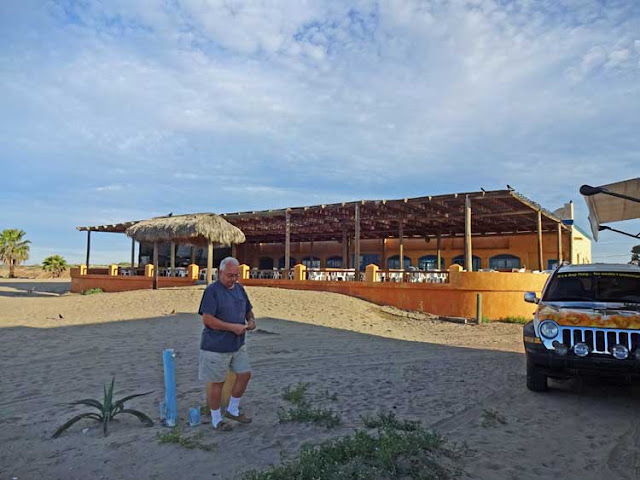 We are parked in the first northern space right up to the sea wall. Seems like we manage to get this space all the time. Most people don't like to park right by the restaurant. The RV in the morning sun. The gold actually looks gold. 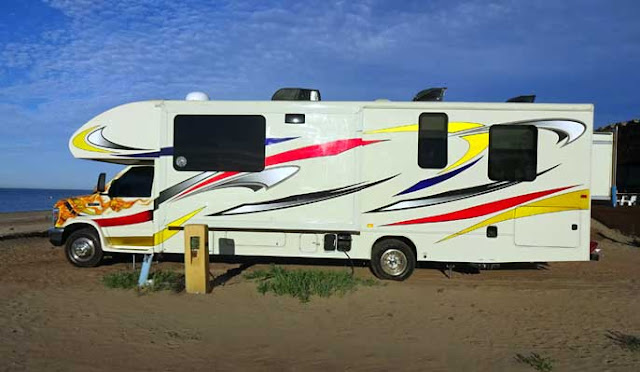 But back to yesterday. Going into Huatabampo to get some tortillas we passed these guys. All dressed up for town. They do this during Lent.  At one time I knew what it was all about but don't remember now. Need to look it up. 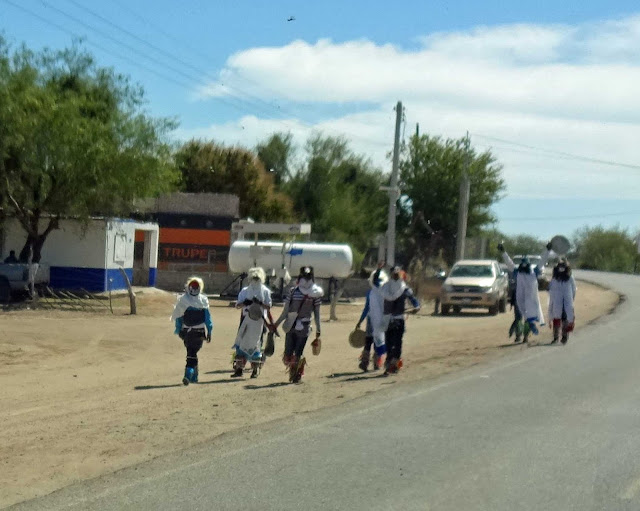 We watched this little house being built over several year. Getting the bricks, building the foundation then adding rooms one at a time as they could afford it. It is completely done now including the surrounding wall and gate. 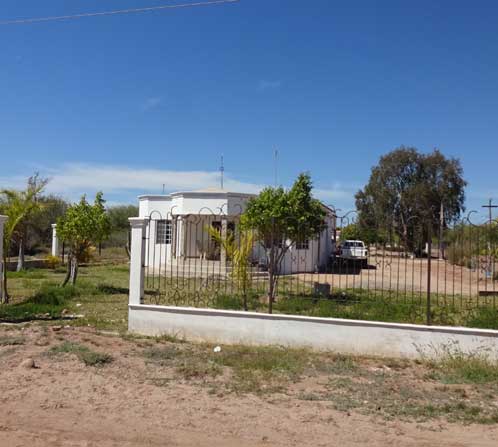 A new gas station being built on the road to Huatabampito. 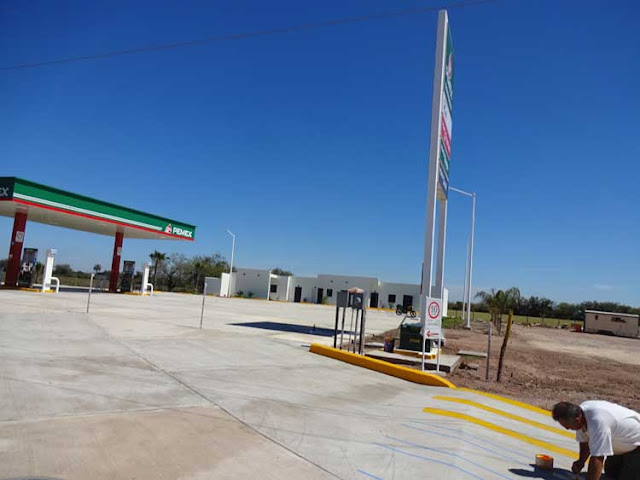 A man with his herd of goats. I didn't manage to get the whole herd, just a few stragglers. 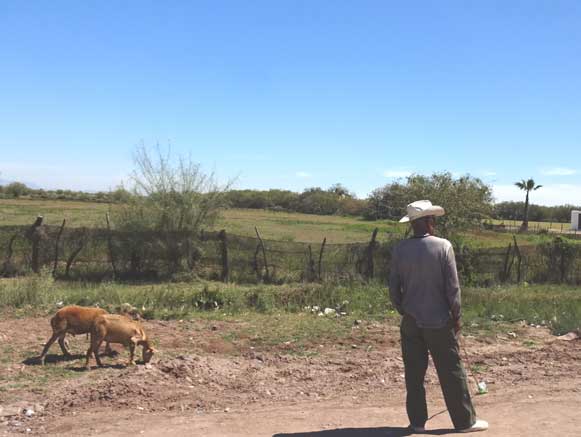 An absolutely huge bougainvillea.  It is bigger than the trees. 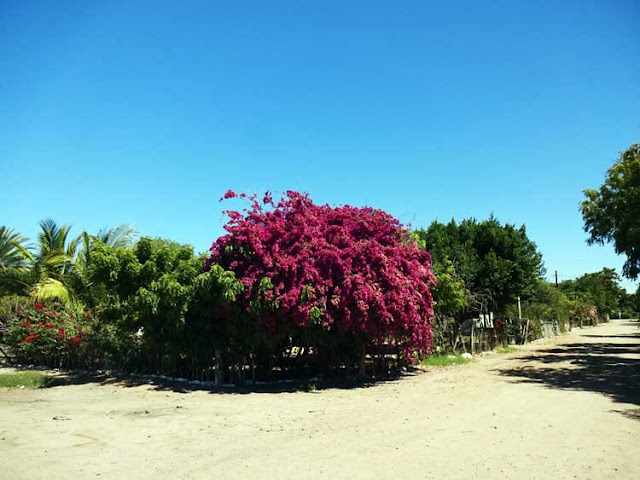 On our way back from the grocery store we passed this Spider Man car. Cute. 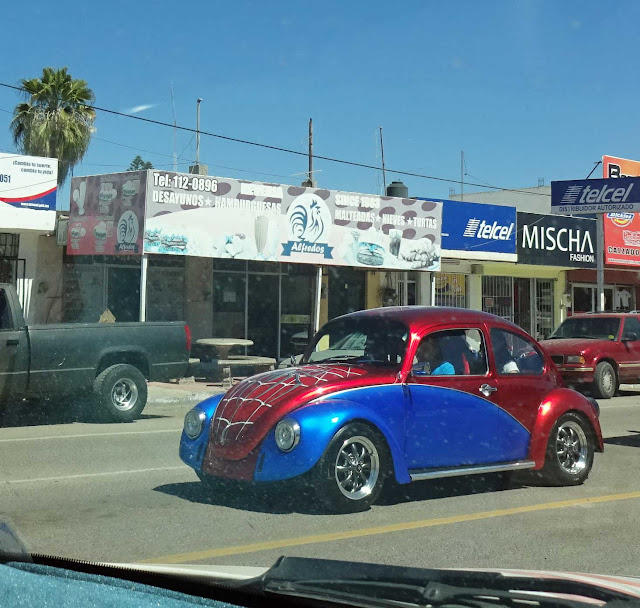 Just the vehicles sitting in the sand watching the waves. 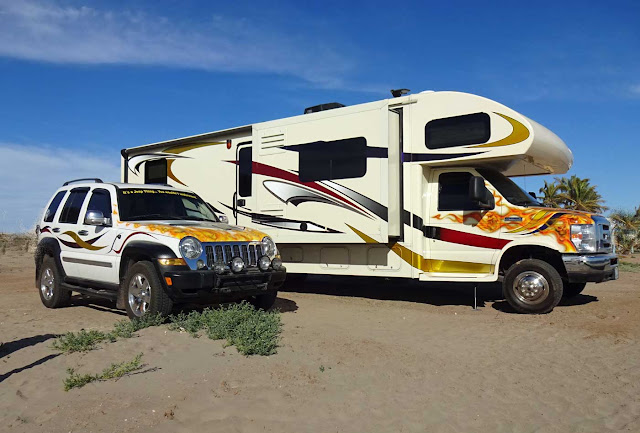 Looking down the beach. Those rigs are the closest to us. Today there are only three other rigs here. 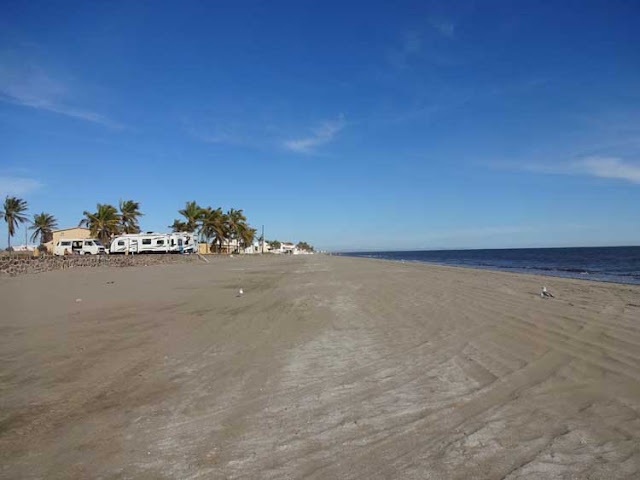 Looking up the beach. The building way over there is a restaurant. This was taken Saturday afternoon. Off and on there was traffic on the beach, a few cars and motorbikes and atvs. 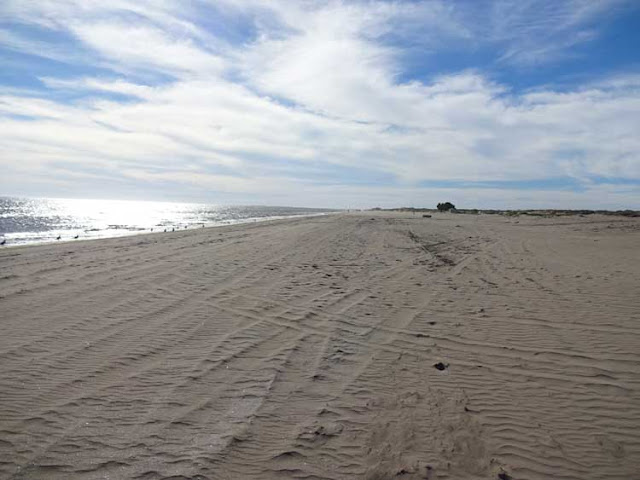 Entertainment at the restaurant. 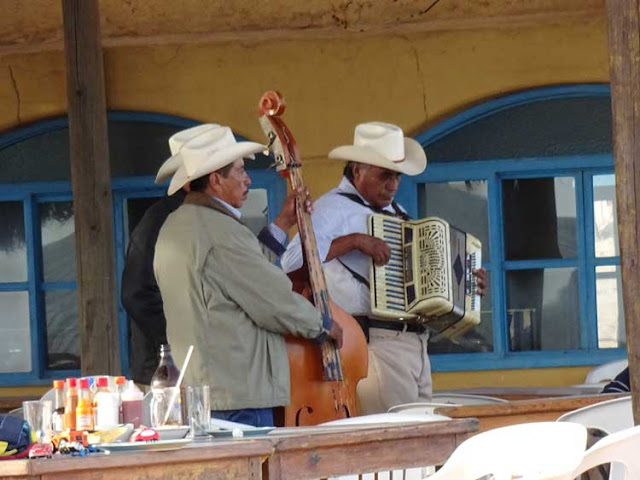 Too bad there is wind noise, I was filming from the RV, they were pretty good.
Bill got the drone out for a while. The wind was blowing but not too bad. I'll get some of the pictures from it later. 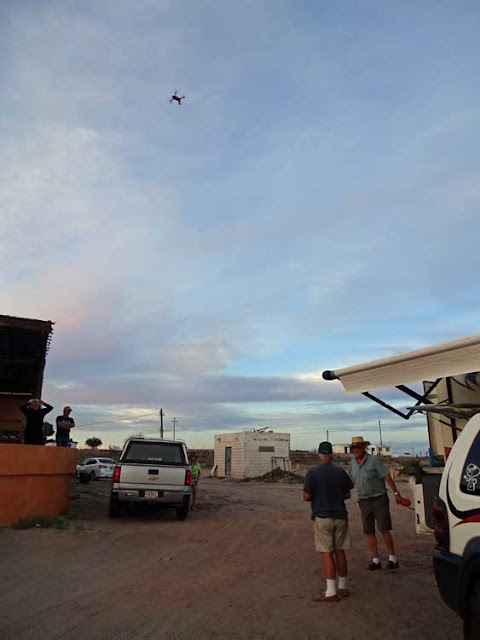 The setting sun on the RV and car. 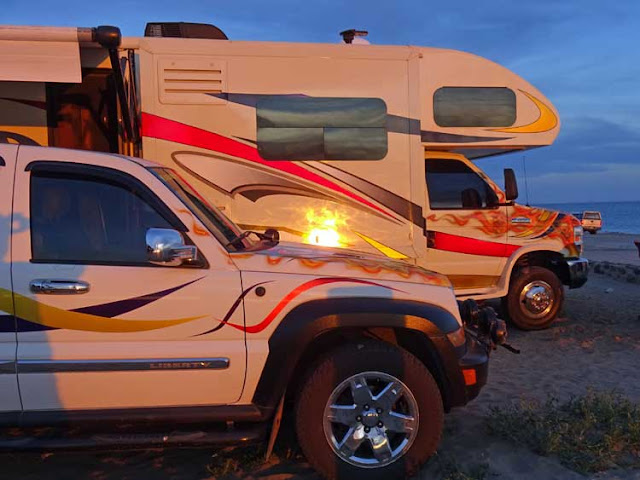 And speaking of the setting sun, Huatabampito has some of the prettiest sunset I've ever seen. Last nights was medium pretty.


After the sun went down we were sitting inside [the bugs came out in force] with just the screen door closed. We heard a quiet "hello?" Kind of ignored it, wasn't sure it was for us. Then a louder "HELLO!?"  Bill went to the door. A guy was standing there. "I'm stuck on the beach can you help me?" "No, I don't think so," answered Bill .I have to add his speech was slurred and he was weaving a little. A few more words went back and forth. Finally the guy left with a final comment.  Guess Bill felt bad so he went out and got in the Jeep and followed the guy up the beach. Took a while but finally got him out of the soft sand and up on the dirt.
Today we went to Yavaros. Poor little town.
Posted by Carol and Bill at 4:43 PM

From your post I have always figured bill is it really kind hearted guy. It was nice for him to help the drunk guy