Just some odds and ends as I really don't feel like posting today.

Five more sleeps and we'll be in Arizona. Now I'm getting anxious to get home.
Today we visited Yarvaros again, glad we went back. Bill talked to some of the fishermen and got a different perspective on things going on there. Even more shrimp boats were in. But will save that for later. Half way to Yarvaros Bill realized we were LOW on gasoline. With the sensor acting up and dropping to empty even when the tank is full it is easy to forget. So turned around and had to go clear to Huatabampo - only about 18 miles but...the Jeep took 20.8 gallons of gasoline. It is a 21 gallon tank. US $ 76 to fill it. That is about US $3/65 a gallon.
Then we went to the smaller supermarket and Bill's special order had arrived. He now has a case of 45 cans of chicken salad. We could not find it in Mazatlan. So got lucky here.
So this afternoon we went back to Yavaros.
Had dinner here in the restaurant again. Bill loves their chiles rellenos. - he had three! along with french fires.   And I had fish filet and rice. I had a coke. This is just his food, except we shared the salad. It came to 14 dollars US. 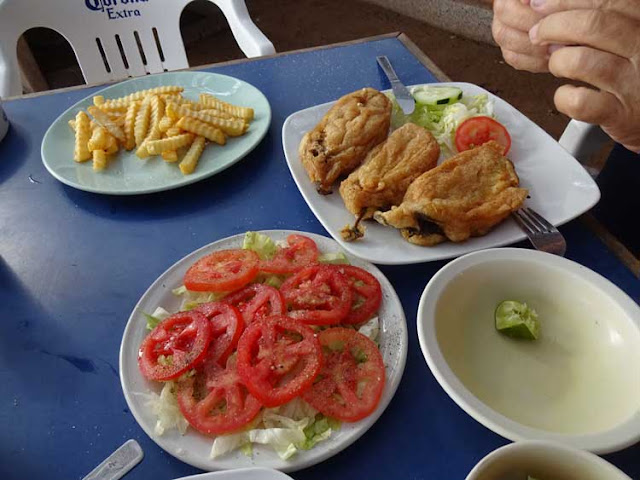 Yesterday we took a ride down the beach. You can go a really long way on these beaches in both directions. We went until we ended up in something ? that had washed ashore. Looked like an algae of some sorts mixed in with something awful smelly. Any way suddenly the car was sliding like we were on ice. Bill finally got it up onto the dry sand so we turned around and head back to the RV park. Today he had to take the Jeep to a car wash with a powerful hose to clean under the wheel wells and the bottom of the car it smelled so bad. ICK. Lots of nice homes along the beach. And some that are still abandoned from the hurricane several years ago.
No sound with this but it can be made full screen.


Bill also took some drone pictures of Saturday nights sunset. At the very beginning notice the girls standing on the posts to the lower left of the palm trees.

Tomorrow we head to San Carlos for a few days, will try to get in the mood to post while there.
Posted by Carol and Bill at 6:04 PM