On Sunday February 25th we took a trip up the coast to the archaeological site Las Labradas. It was a bright sunny day and the wind, for once, wasn't blowing too bad. A perfect day to go not too hot to climb around on black rocks. It is about 30 miles north of Mazatlan off of the toll road. And of course there is one toll to go through to get there and back. We have been here several times, this was the last time a couple of years ago. The first time years ago when Bill and I went there we got lost read about it here. Now there is a big sign on the toll road. There is also this sculpture marking the turn off. It you don't know it is there it is very easy to miss. 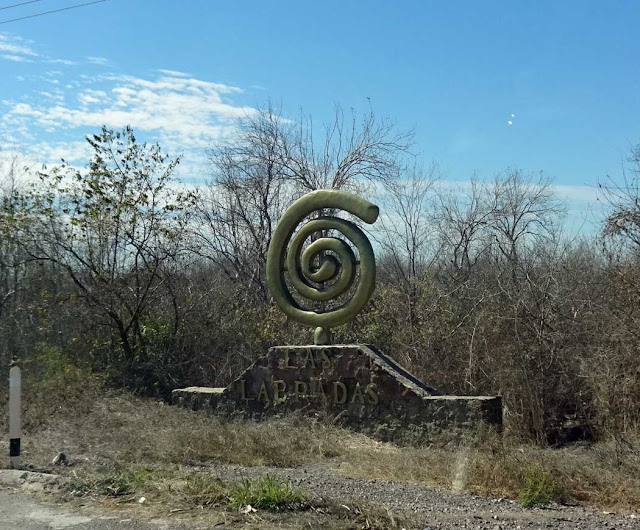 The vegetable turned on to the entrance dirt road just before us. That is a really rough cattle guard. 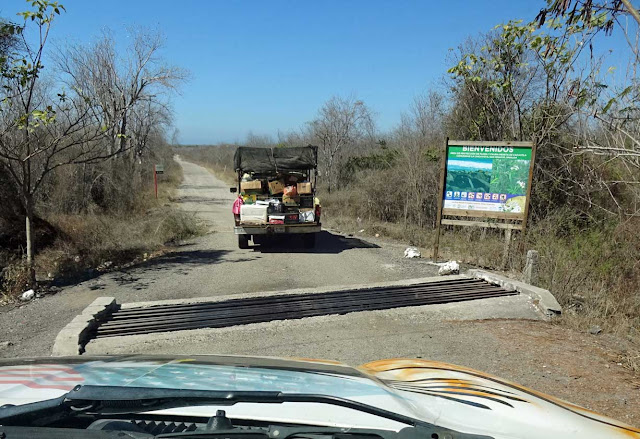 A quick move around the vegetable truck. 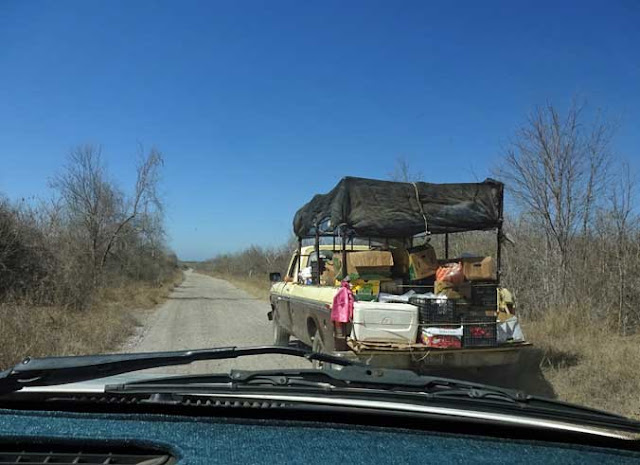 The first sign in the little village of La Chicayota, need to make a turn here and continue through the village. 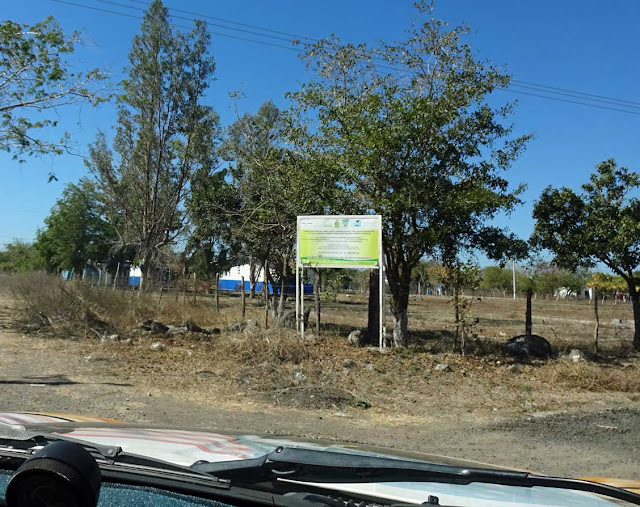 Some really pretty and big bougainvilleas growing in the town. 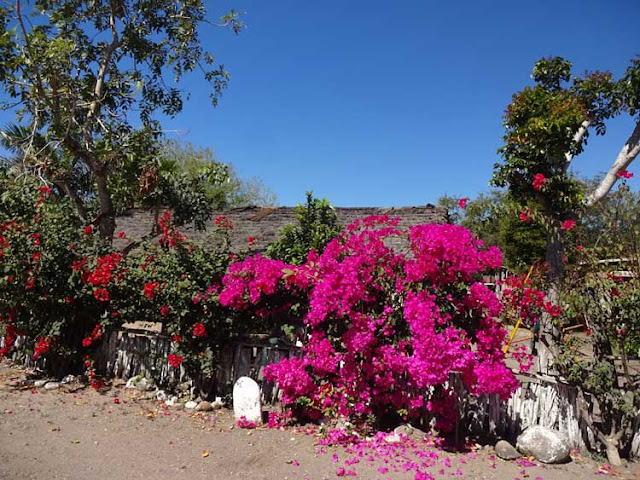 Down the dirt road and under a rail road bridge. 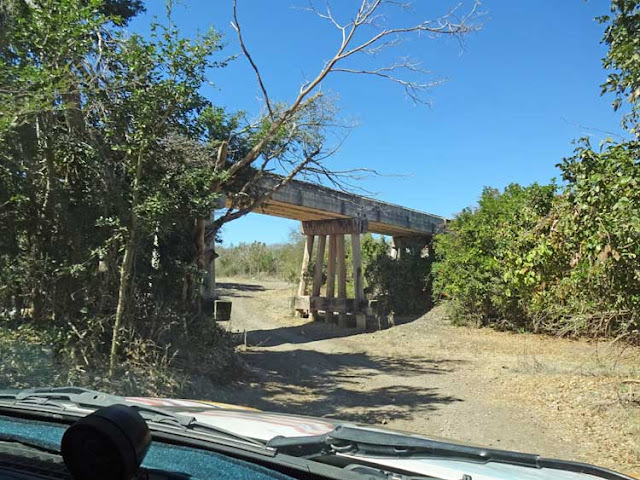 A herd of goats on the other side of the bridge. I guess we were all distracted, cause here we missed a turn to the main road into the site. 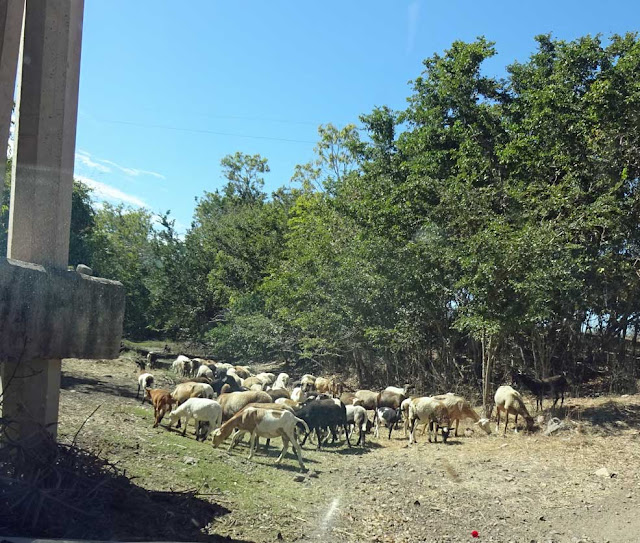 Hum...wasn't this road a little wider and more graded last time we came here. No comment from driver. 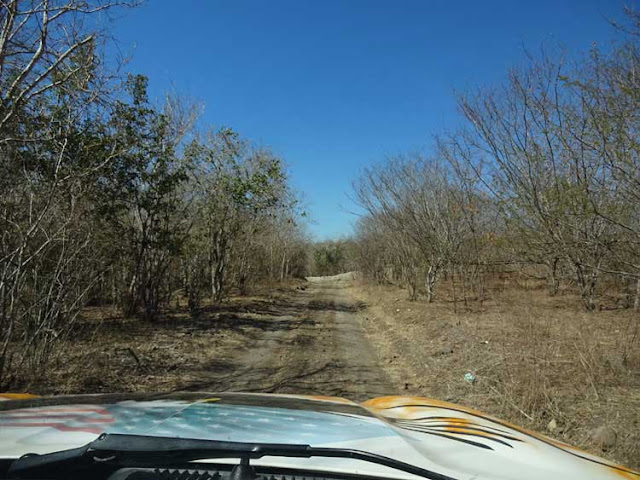 I'm pretty sure this isn't the road. But watching the compass we were kind of headed the right direction - west towards the ocean. 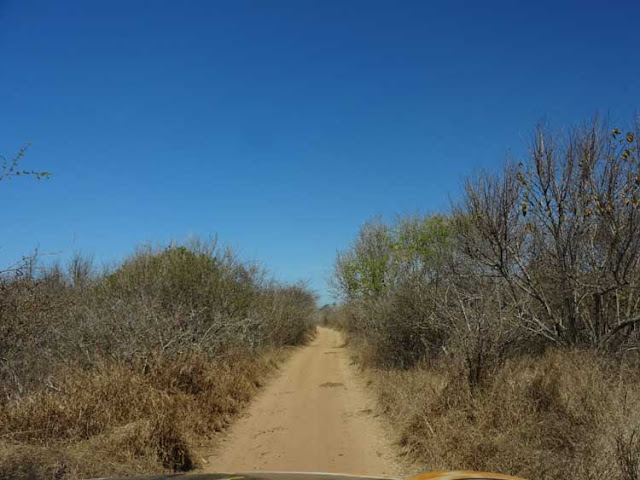 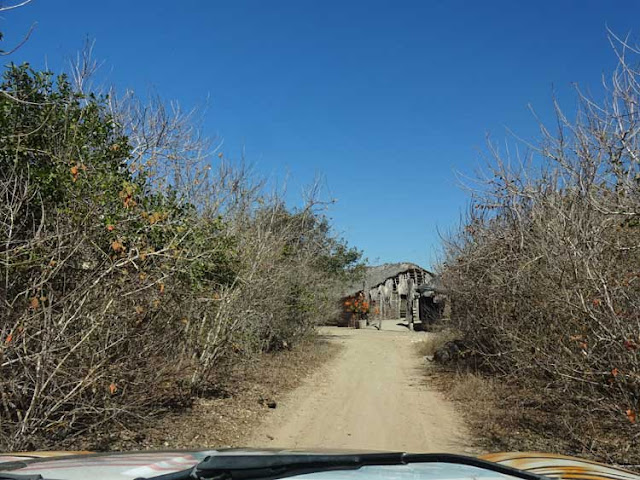 I had to laugh a couple of days later when I read this notice. Thought maybe I should write a comment that we know a back way in.
Zona Arqueológica Las Labradas. Sinaloa, México

· February 28 at 2:21pm ·
Se le informa a nuestros visitantes que debido a un bloqueo en el camino hacia Las Labradas, no se puede acceder a la zona a pesar de que ésta se encuentra abierta y opera de manera normal, lamentamos los inconvenientes que esto les ocasiona y en cuanto el bloqueo sea levantado se los haremos saber.
We inform our visitors that due to a block in the road to Las Labradas, there is no access to the archaeological site despite the zone is open and opperating normaly, we sorry for the inconvenience and as soon as the road block is lifted we'll let you know.

So we were parked and out walking towards the museum and entrance. 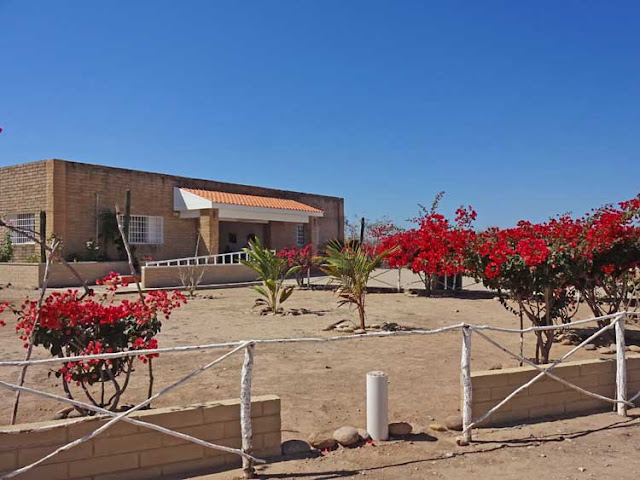 A sign with the do and don'ts. It always surprises me that we are allowed to go and climb on the rocks to search for the carvings.

Most of the carvings were made between the years 750 and 1250 aC the Aztatlian period. Some of them may have been done around 3000bC.
There are more than 600 carvings along this group of volcanic stones. 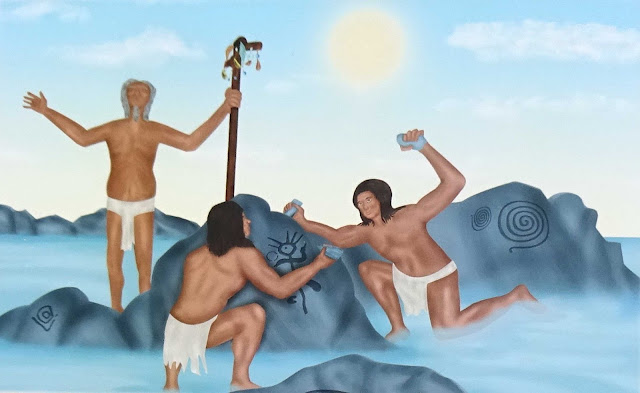 The walkway from the museum to the beach where the rocks has a fence of living cacti. Some are blooming. 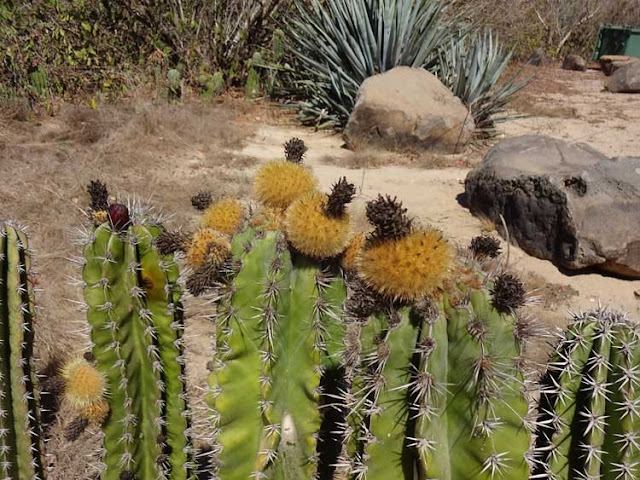 A little guy peaking over the rock looking at us. 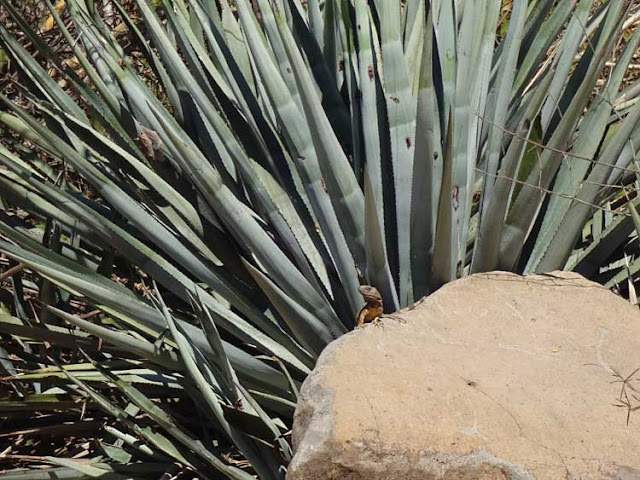 Following Bill who is on a mission with his drone. Turned out it was a little too windy for the drone to stay up too long. 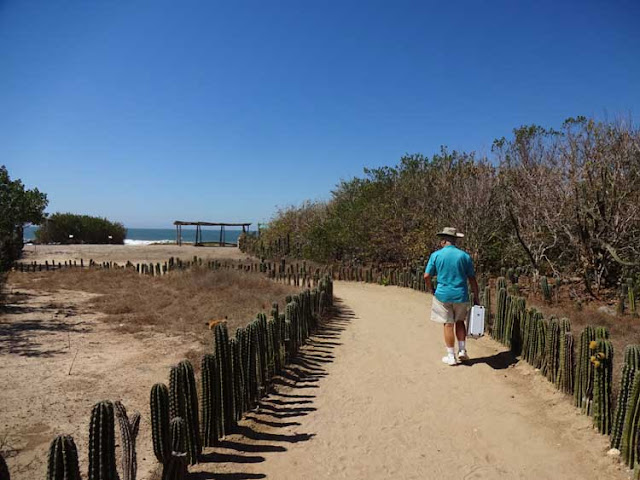 The next three pictures were taken with the drone. This area is really big with lots of volcanic rocks to search through to find the carvings.

Looking towards the north edge of the area.

The first one I came upon. Really had to take pictures of them with the shadows. Maybe a pelican on the big rock. The little rock also has something on it. 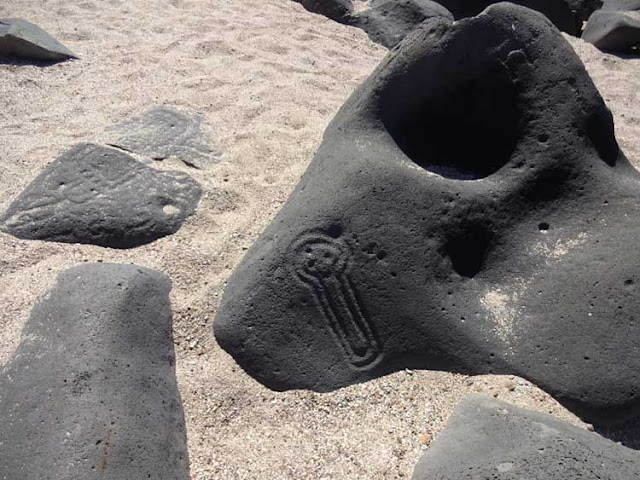 The explanation of this particular rock in the guide book is weird. I quote, "On a rock very hard to reach due to the ocean's activity, concentric circles form this figure which seems to be a charcoal image." No idea what they mean by "a charcoal image." 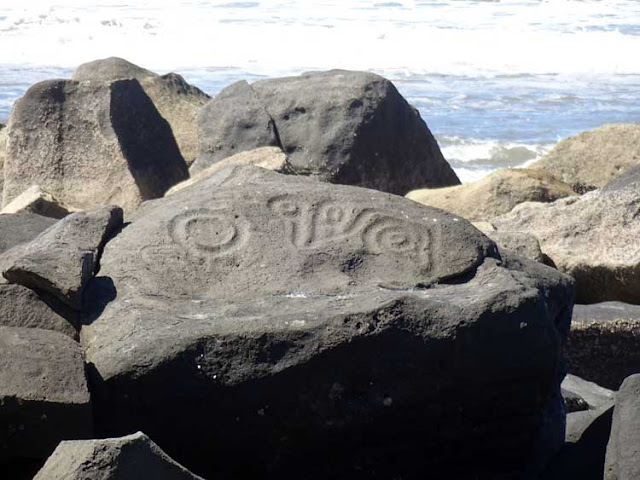 This looks like a human figure of some sort. 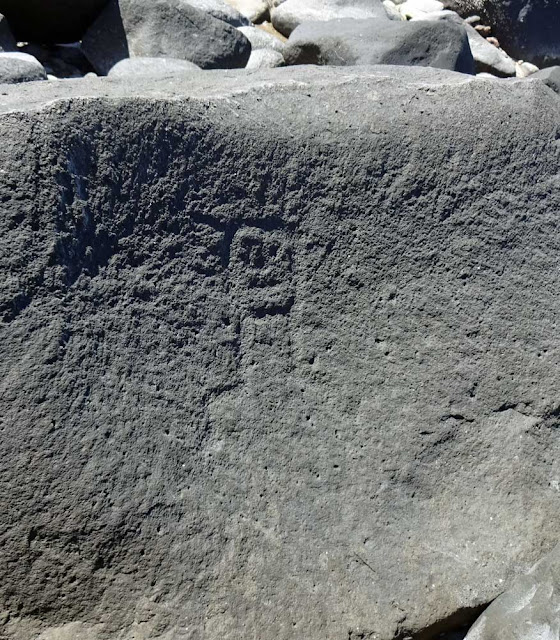 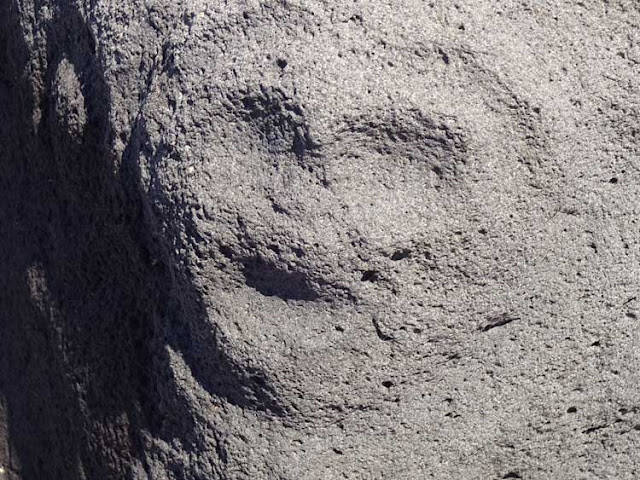 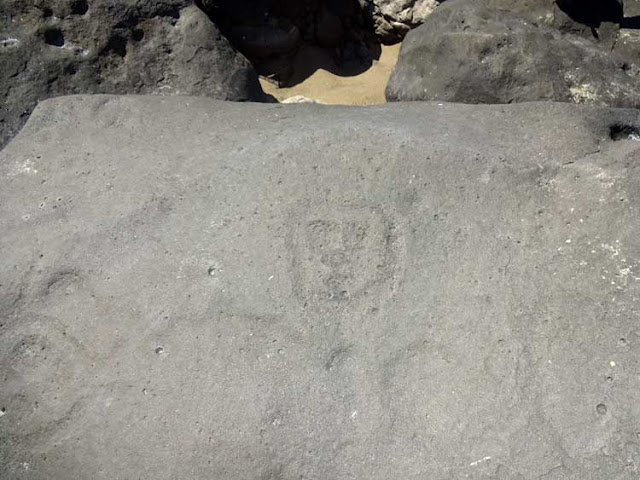 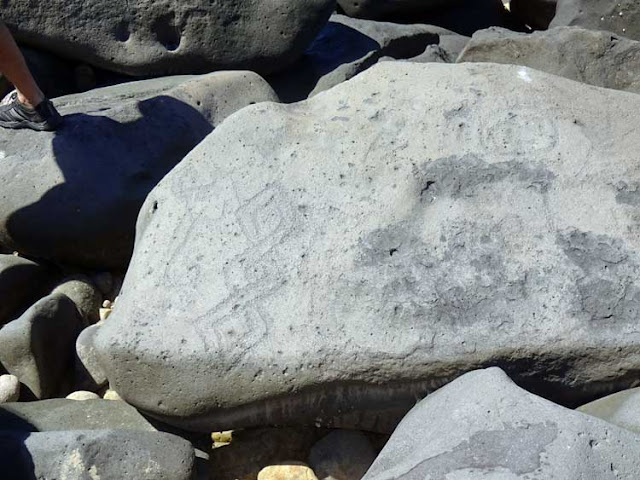 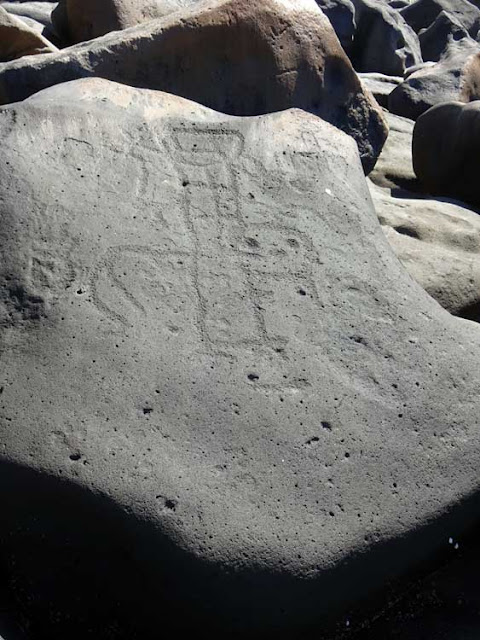 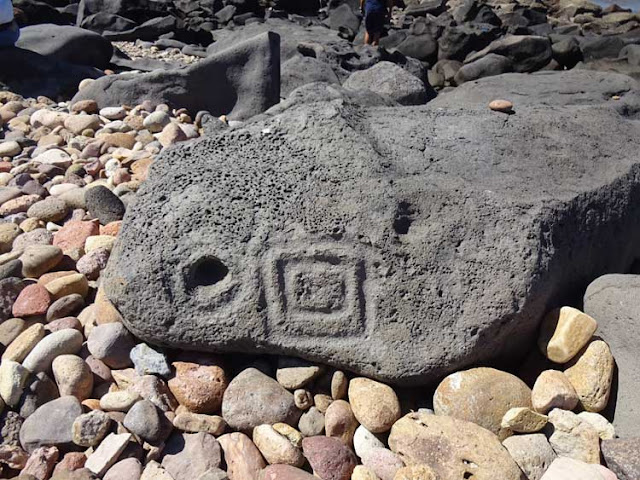 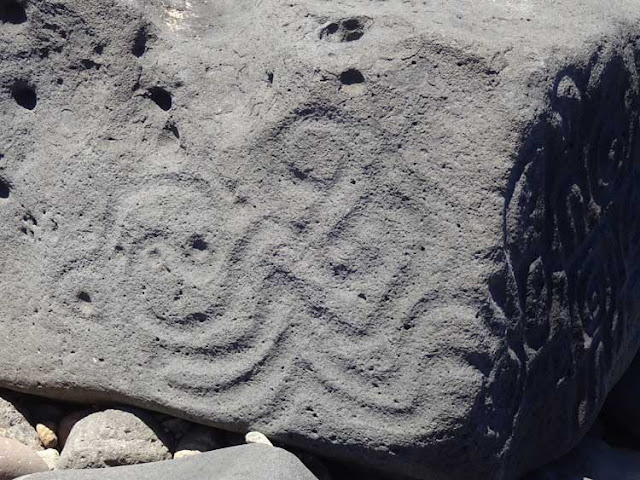 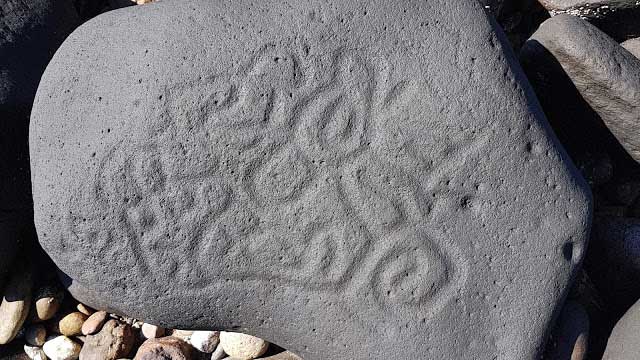 John and me out walking on the rocks. Note to self - leave damn purse in the car next time. 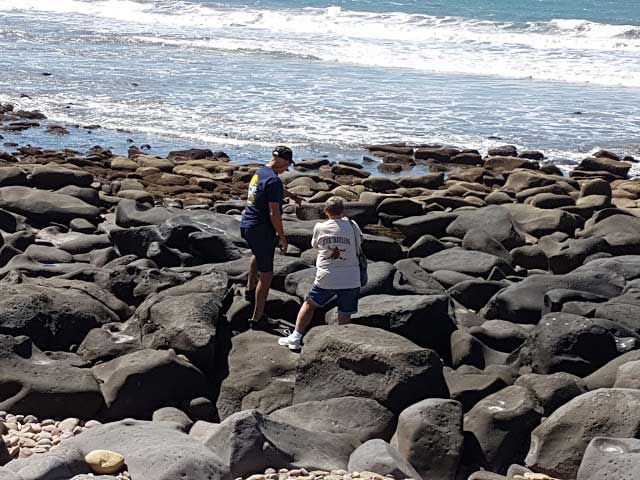 And that's all I'm going to post from there today. Maybe another day I'll do more. It was fun looking for them but getting decent pictures is hard.
Coming home we took the correct road. It was still dirt but a lot wider and not quite so rough.
Posted by Carol and Bill at 4:54 PM

Thanks for this, want to do it next year.

I really appreciate your pictures and all the wonderful information you have About Mazatlan.I hope to retire there someday and I love reading your stories. Thank you so much