On Tuesday we were getting the RV washed and waxed so decided to make our last trip this season to La Noria. Bill had promised the cook he would teach him how to make Argentinian Chimichurri. So off we went. It was a cloudy day so pictures aren 'tvery bright. Heading into the restaurante with a bottle of Chimichurri in his hand. 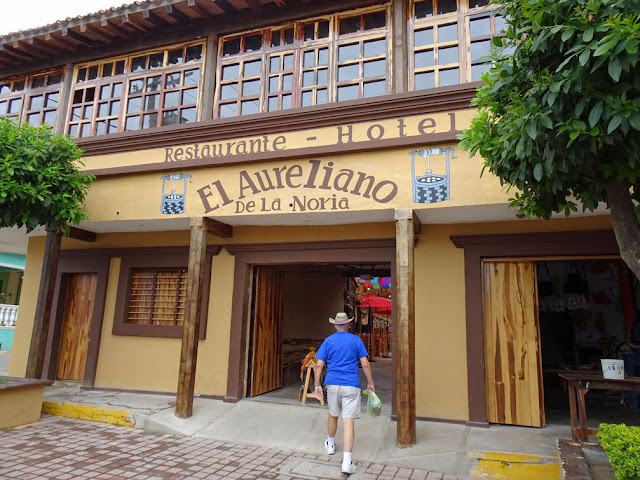 Giving it to the cooks and telling them how to make it. 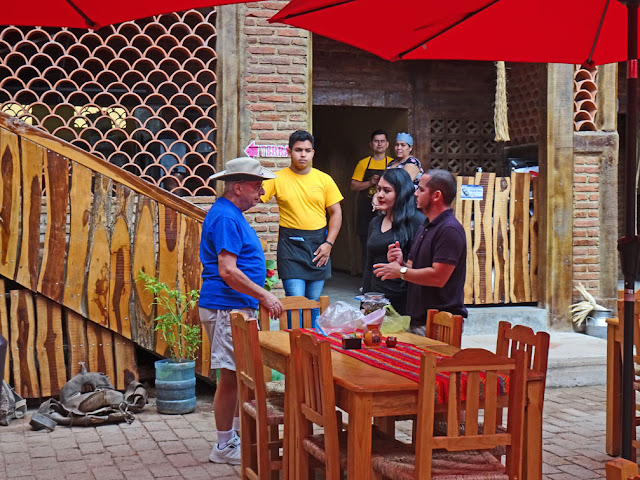 While he was doing that I was looking around again. Finding some things I'd missed the first time we were there. 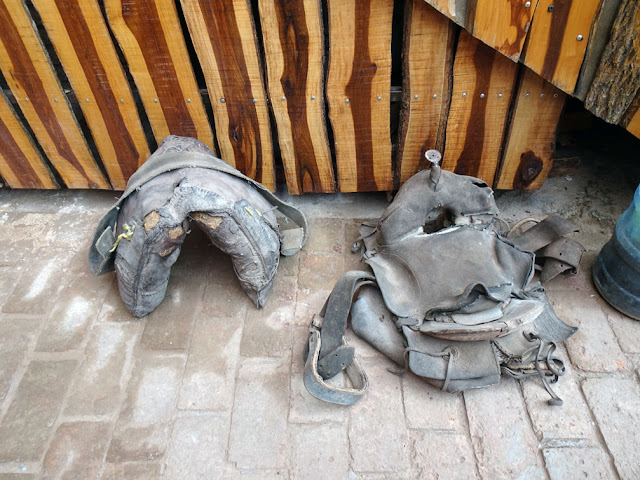 I really like this. Maybe next year we can get out friend the blacksmith to make us one. Would look great hanging from our patio. 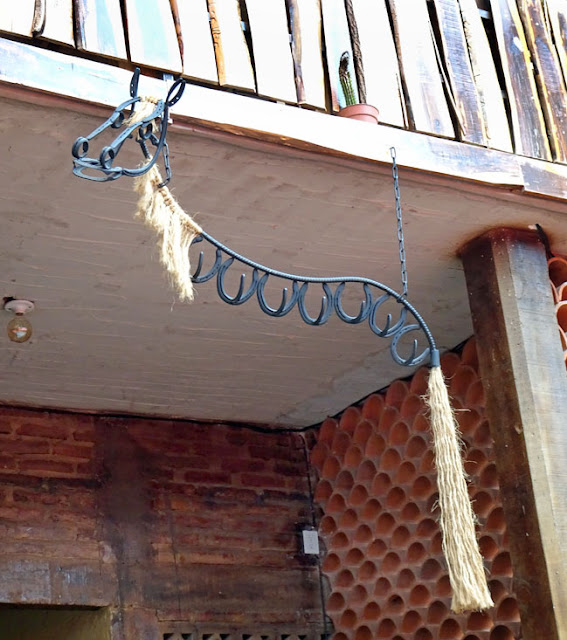 Just some pictures. The was water in the well this time. 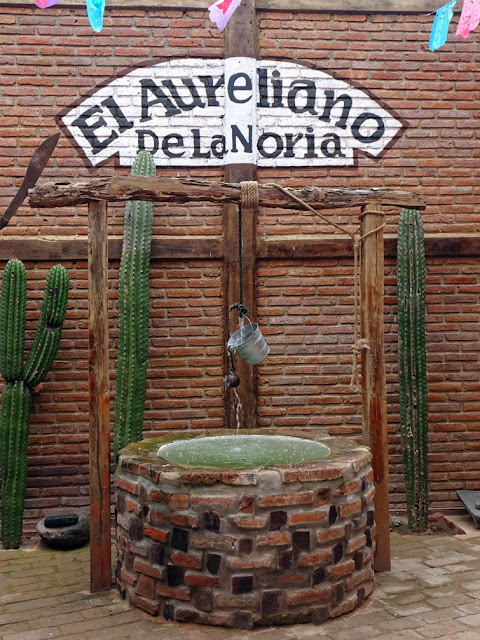 Because there was no sun shining through the umbrellas it doesn't look as red as the pictures from the other day. 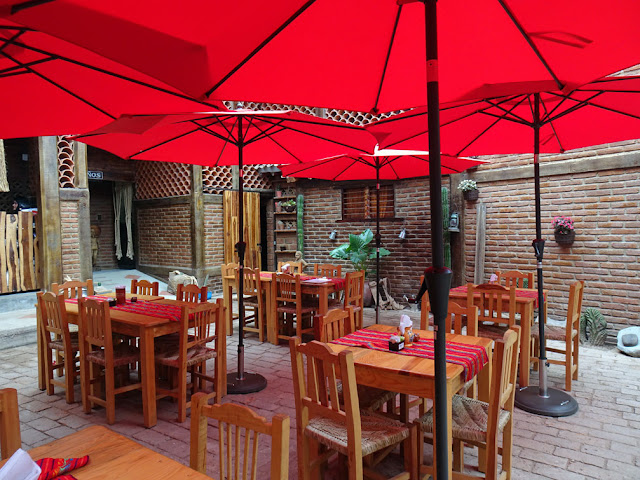 They decided to try the Chimichurri with some grilled steak - very good choice. So Bill was right in the middle of the grilling. We were the only people in the restaurant. 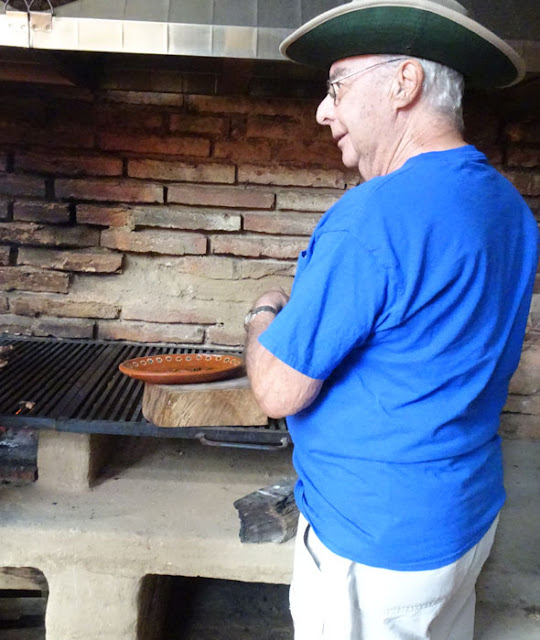 He basted the meat with the sauce as it was cooking. Cutting up a piece to share with everyone. 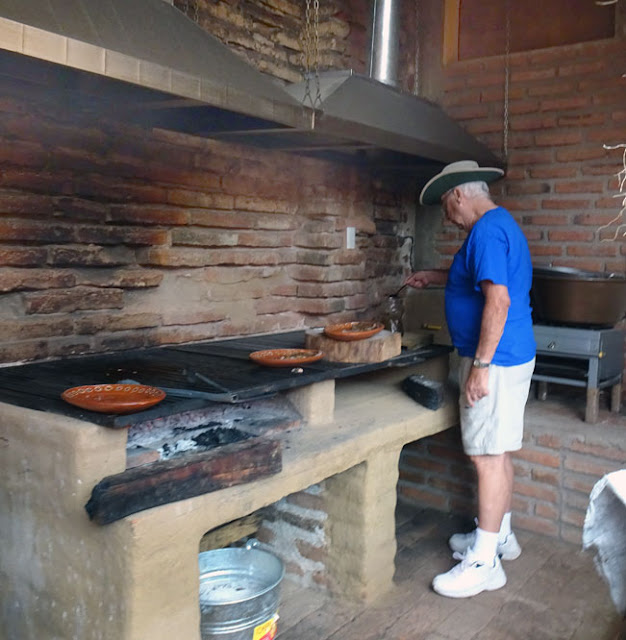 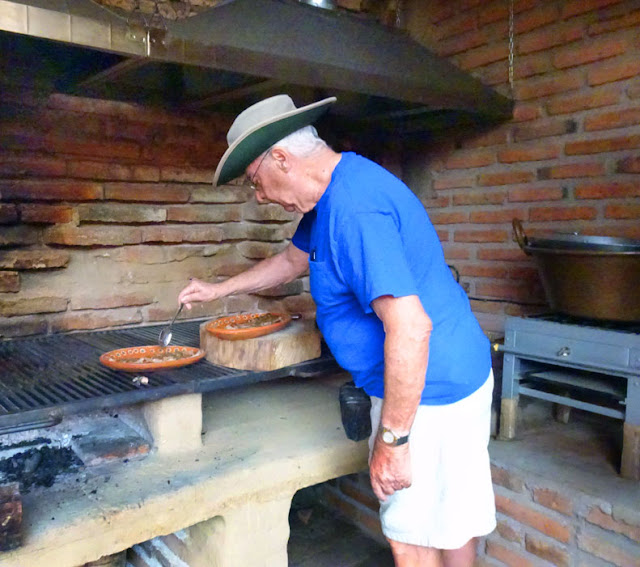 She is making blue corn tortillas on the flat grill. 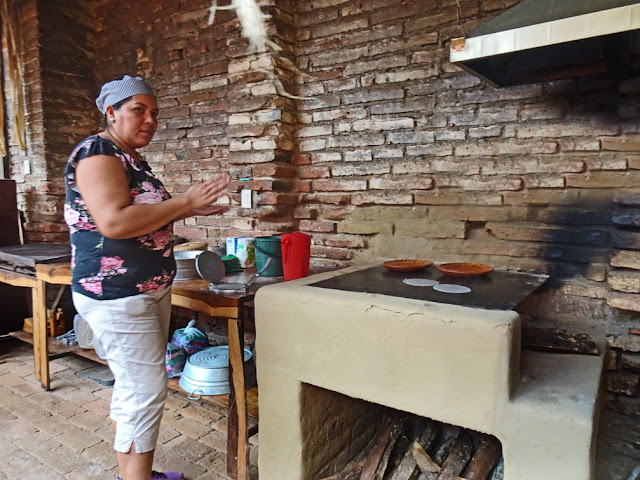 The mix for the tortillas. 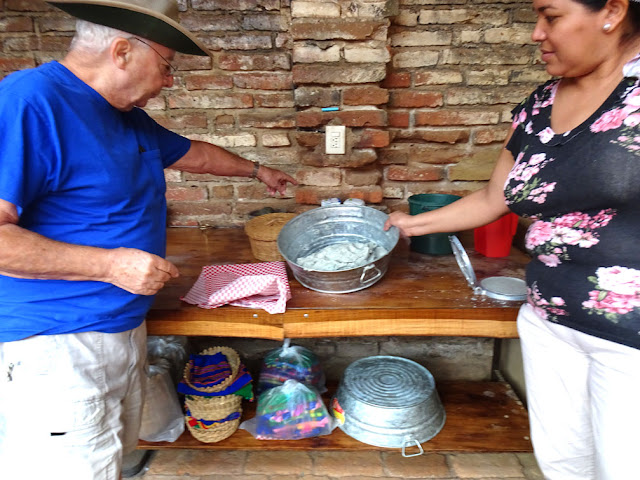 Freshly made and hot. Sooooo goooood. 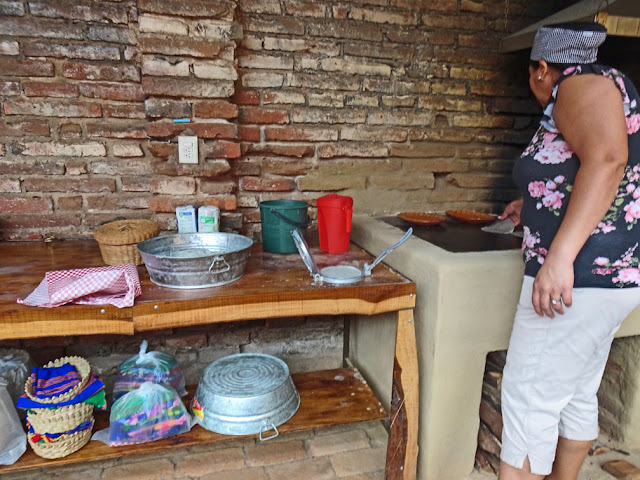 My breakfast. Ham and cheese omelette and excellent beans. And I usually don't like  bean. These were delicious. 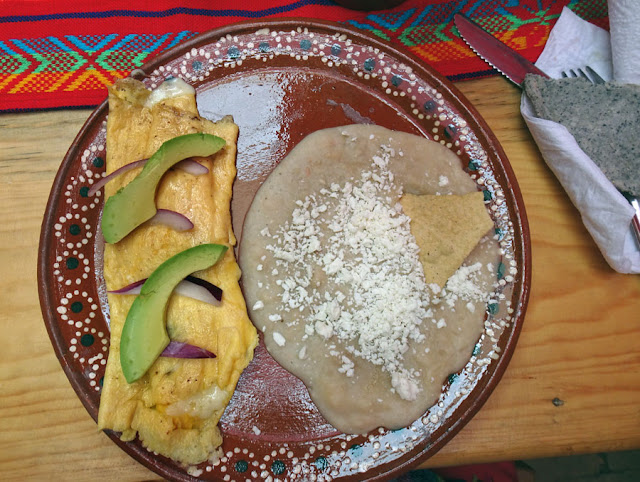 An omelett with Mexican Rice - again the rice was delicious. 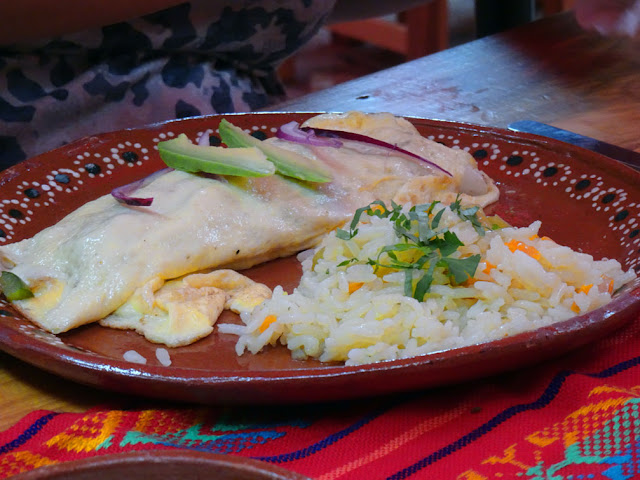 Just some more items sitting around to add interest. 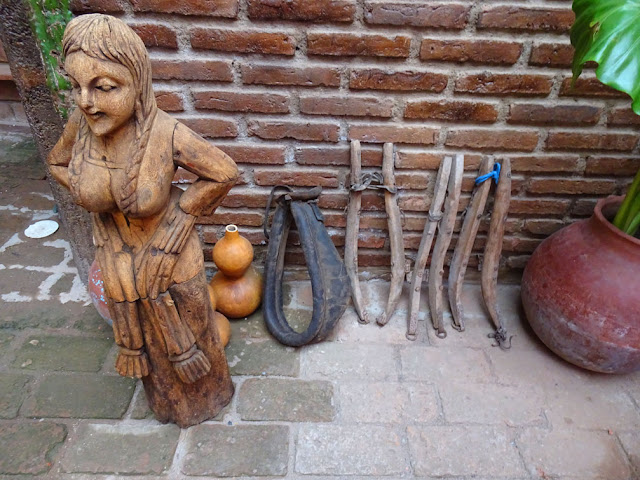 Another visit to the old original house - over 200 years old. Looking out the front porch. The roof is original. 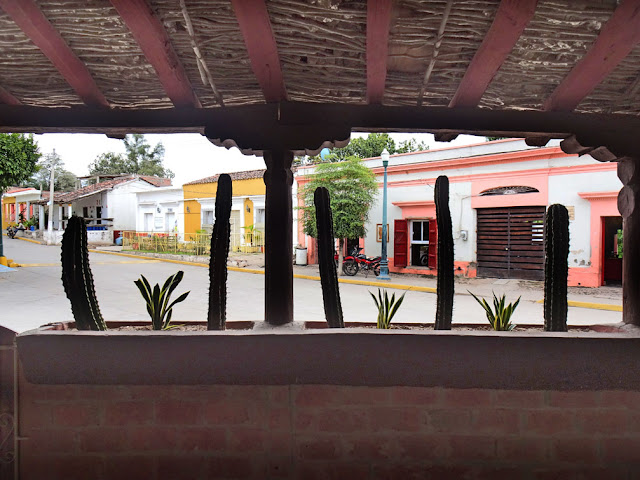 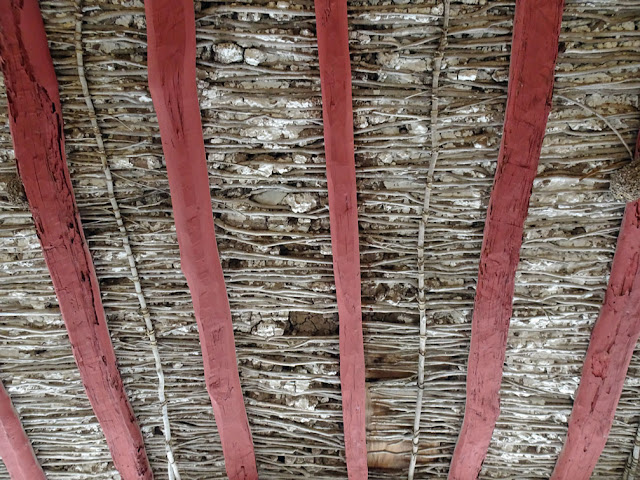 Inside the living room. See the red line. You can see the bricks are discolered - they had to be removed from the original wall and a big support beam had to be put in to support the second floor. Then the old bricks were replaced. There were three or four of these new beams in the house.  The arched area was an old door. 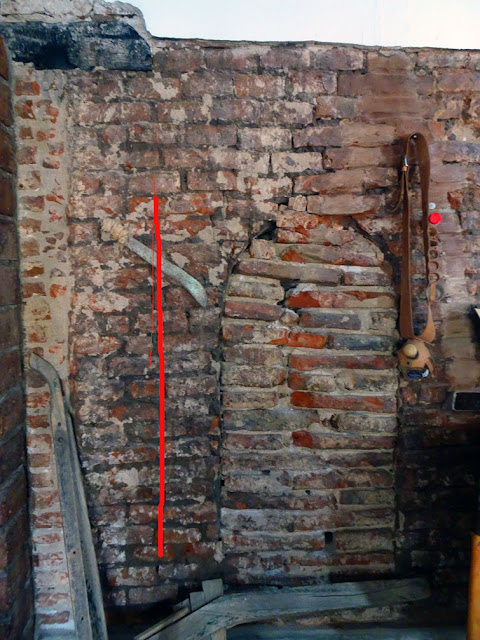 Back outside. The balconies for the three upstairs hotel rooms. 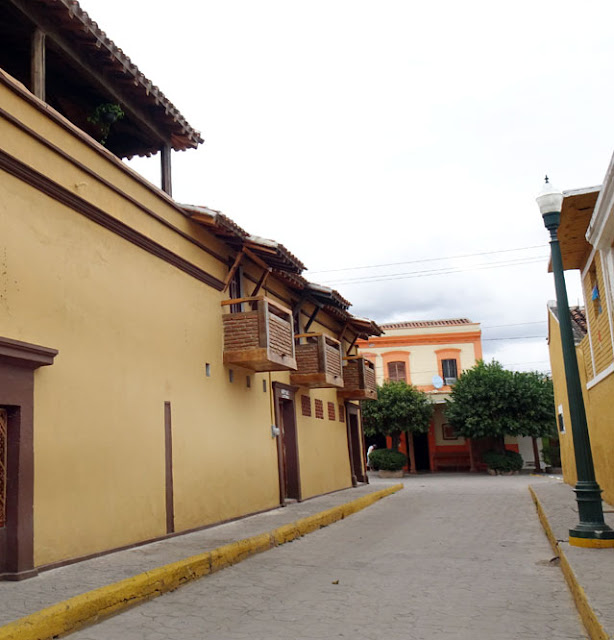 The old house under the new restaurant and hotel. 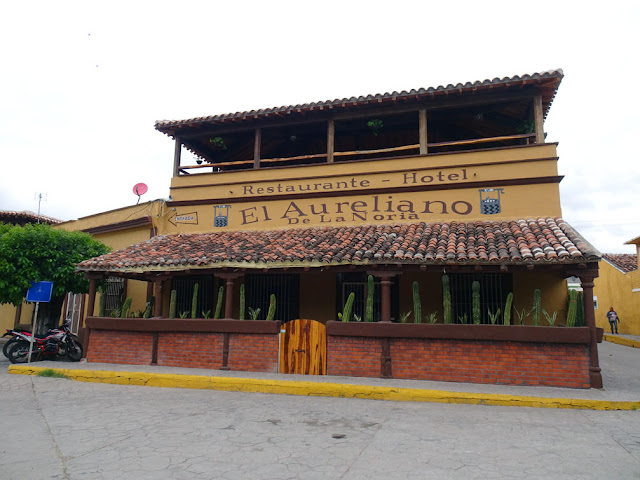 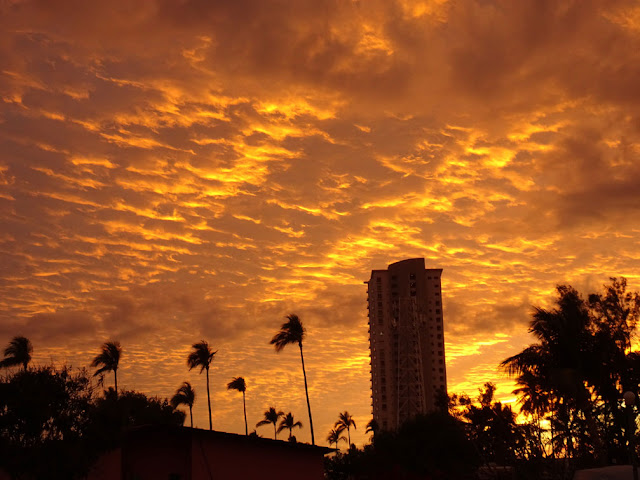 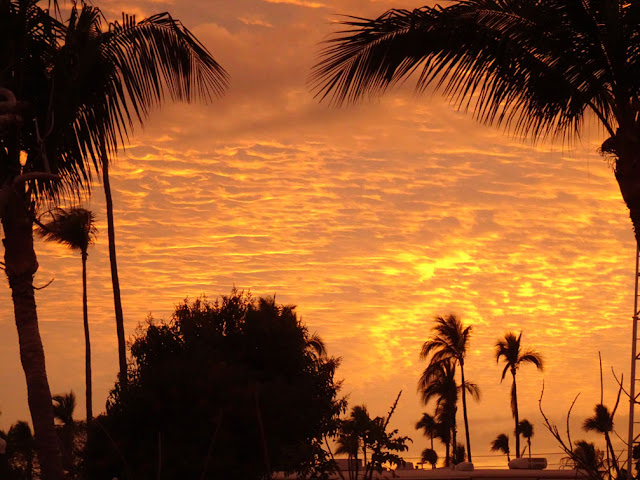 Doesn;t look like tonights will be pretty. And tomorrow we leave in the morning heading north. 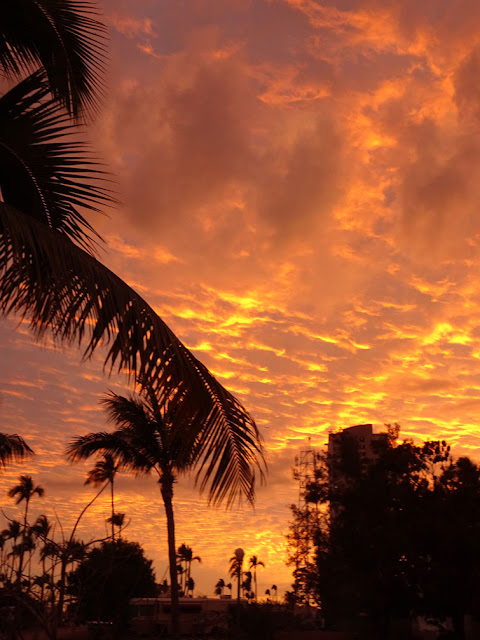 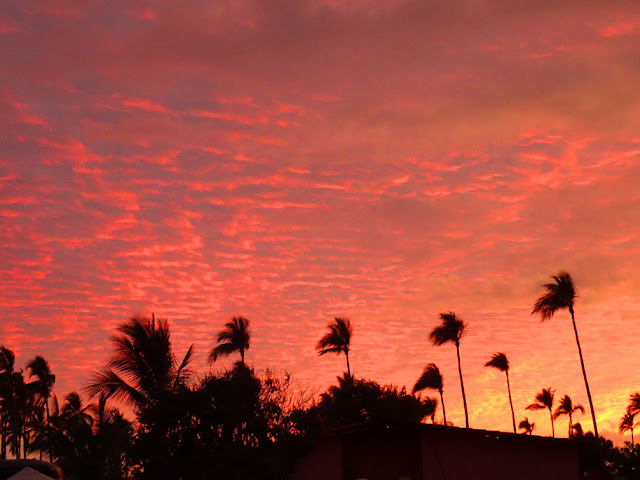 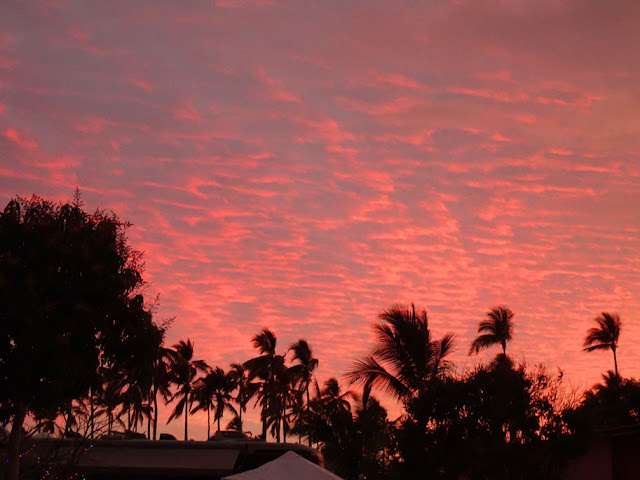 Today was a cool windy day again so we didn't get out. Just finished putting things back where they belong and getting ready to roll. Not sure how far we will go tomorrow.
Posted by Carol and Bill at 1:07 PM

I'm jealous that I wasn't there with you. We will have to go there next year a couple of times. You two have a safe journey home.

thanks - will try to keep blogging on the way.

I've changed the setting on my comments to see if they will work for everyone now.