This is scary! A new reality.

We were up bright and early yesterday morning - I had called the local WalMart and they opened at 6 a.m.  So we were in the car about 5 to 6. Temperatures were in the 50s and Bill was freezing. And neither one of us could figure how to turn the heater on. Have not used it in years. And with it still being dark out we couldn't see the dials. Finally gafter much fiddling we got it working. 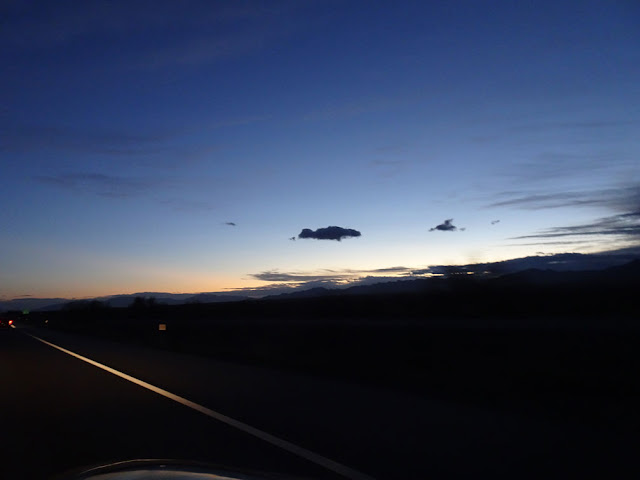 Got to WalMart about 6:10 and the parking lot was FULL. Guess we weren't being so smart after all. 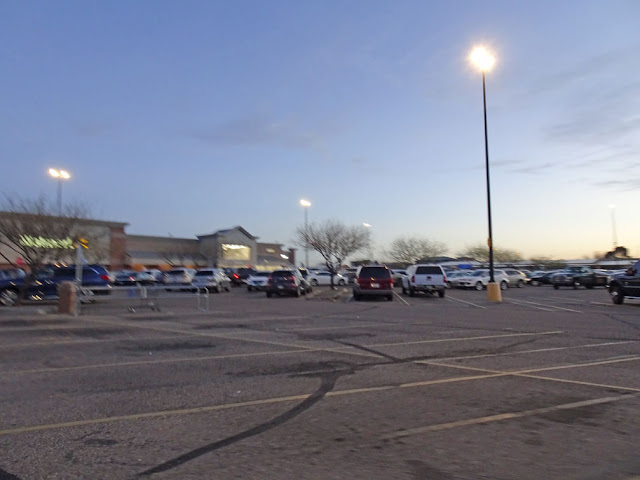 First we went to pharmacy to get a few things we needed. Were lucky and everything we wanted was in stock. But a quarter of the shelves were empty. Only two bottles of alcohol left. Glad we got some in Mexico.
Then we picked up a couple of new sewer hoses for the RV. The Mexican really rots them. And also found a pair of Bill's favorite slippers. So far so good.
Then on to groceries. Whole different story. We had a long list as we'd been using everything up over the winter.
I did get cottage cheese and butter. But noticed all the margarine area was empty. Went down the laundry soap aisle - mostly empty. Clorox was flying off the shelves. 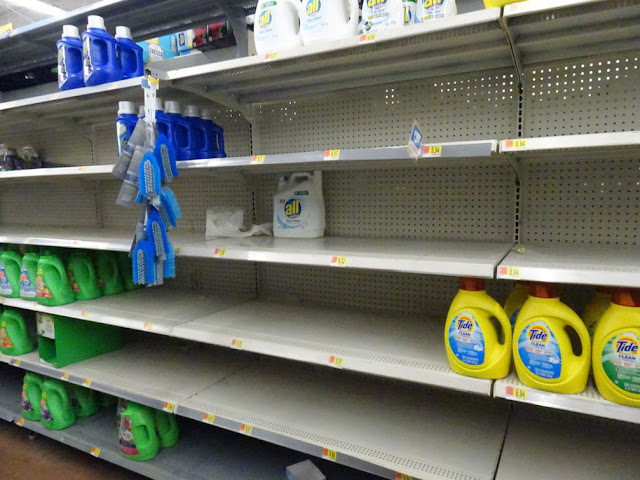 Paper towels were limited to One Per Person - don't think there would be a problem as there weren't any. No toilet paper either. 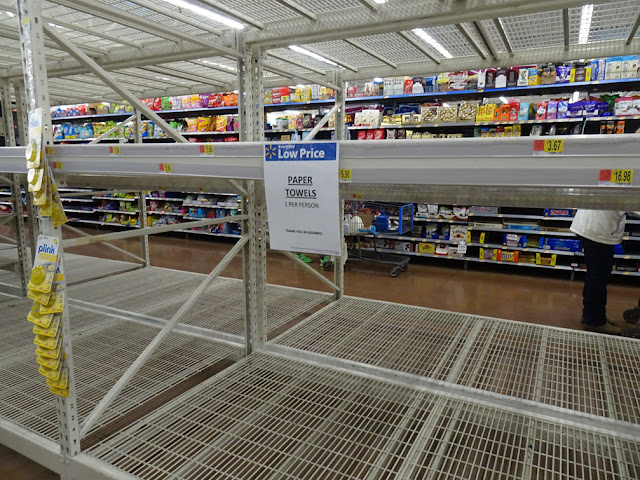 This was the soup shelving. The only soups left were the ones no one likes. Campbells were all gone. 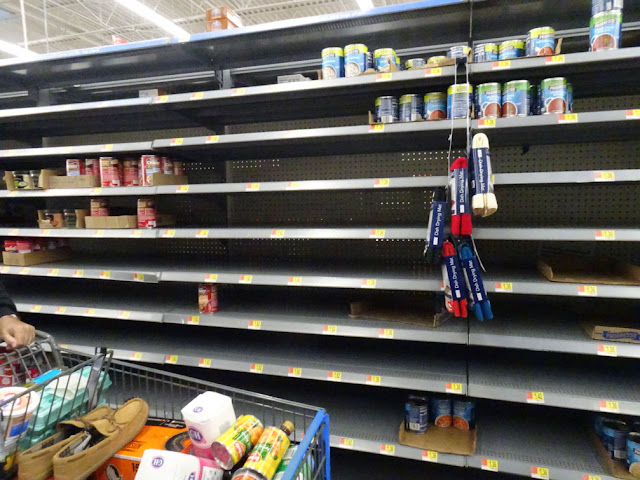 We were looking for Pasta Roni as we like the noodles as side dishes or snacks. Not one box on the shelves. Who knew so many people bought them. There were instant potatoes though. Didn't get any , not on list. Maybe we should have. More about that later. 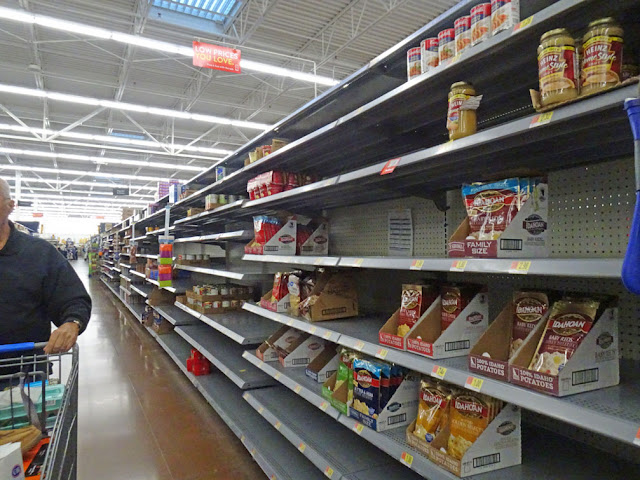 This is pasta but we have a few of them already, not used them so don't know if we like them. 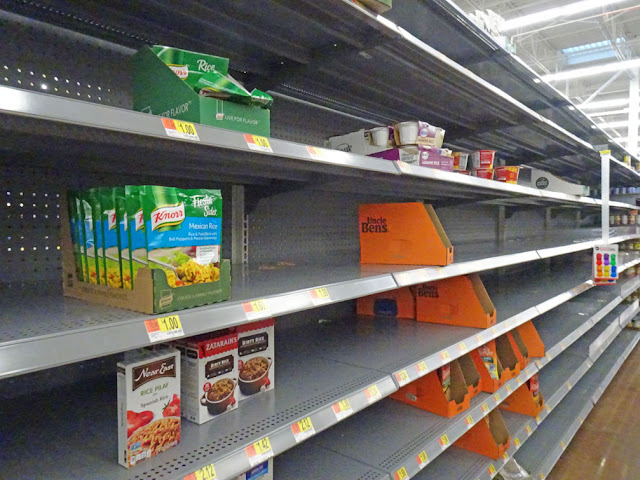 So what was on our list that we didn't get - BREAD - the bread shelves were completely empty of regular  bread. I did manage to get THE LAST loaf of cinnamon raisin bread and we found a loaf of sourdough way back on the shelf. I have been craving raisin bread so got lucky there. Didn't see bagels any where.
So from our list - no soup, no bread and no pasta roni. And I forgot to get a new baking soda for fridge and didn't look for ice cream. Even the meat coolers were empty. Did get a big package of chicken breasts and a pork loin roast. [Called our son in Vegas last night and asked him if he had toilet paper -he did offer us a couple of rolls, but so far don't need it. He did say - if we found meat in any market to buy it as there us none available in Las Vegas, he had been to several stores. It is unreal.
I did buy an eggplant and it was so cold in here with the rain and wind last evening I got it out and fried it up. YUM. 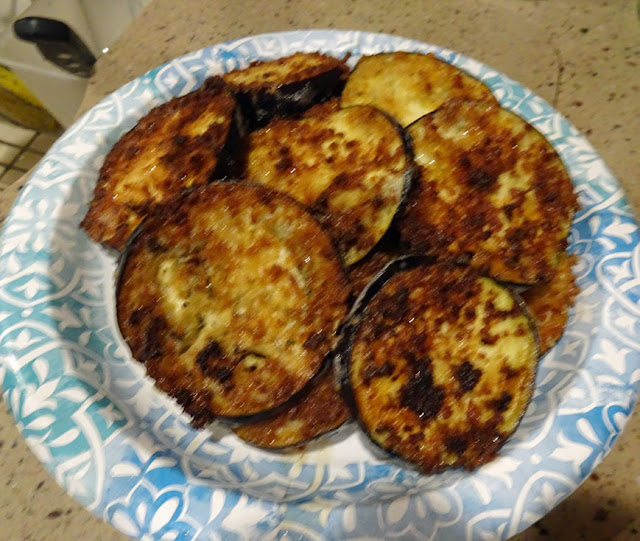 Then keeping with the cold and wet theme I fixed some chicken paella. Tasted good and warmed up the space. We had the furnace running all day and night and still running now. But the ice cold wind found every crack it could to come inside. 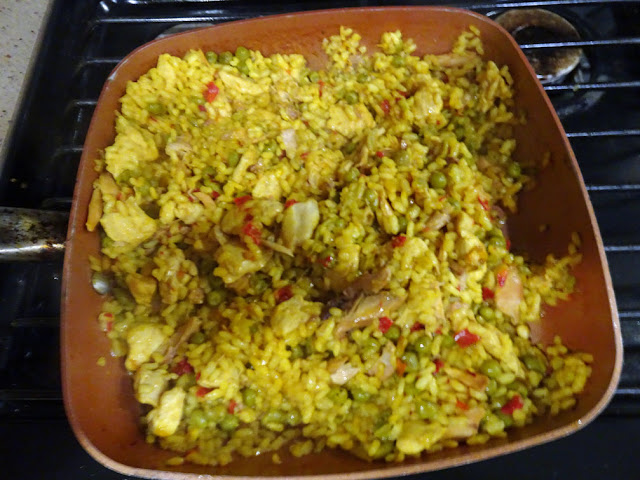 We checked Amazon for the Pasta Roni - unavailable. Then I saw there was some on eBay AT $5.95 A BOX!! Usually is a little over  one dollar a box. People are mean. I hope their supply doesn't sell and that it gets bugs! Guess that makes me mean too.
We are going home to an empty freezer, refrigerator, and cupboards. Hope we can make one grocery run and find what we need and be done with it. On the way home we pass through a couple of towns with WalMarts but all are snowbird towns so imagine it isn't worth stopping. Or maybe all the snowbirds have already gone and stores are stocked. Hum...stop or not?
I sure am missing NASCAR. The weekends seem so long now, especially with out going anywhere. And missing soccer too. Have to check the TV to see what they are airing instead. Guess lots of old reruns.
The RV park we are at here in Amado closed its office the day we got here. But people can contact them by phone - she says.
Well we just decided to start ordering Hello Fresh - the meals in a box that you have to prepare, but all ingredients are supplies. Will get three days worth for both of us. We enjoyed the meals last time we tried it. So next week we'll get our first delivery. Less looking for stuff in grocery store.
At least the sun came out around noon. But still cool.

Wow, that was good information on what is and is not on shelves at WalMart. You covered so much more then just "no TP". Thanks for that.
We head home in one week - also to a bare and empty fridge. Did you notice if there was rice and dried beans? Stay safe and stay well and continue safely home.

I think I saw dried beans but didn't notice if there was or was not rice. No pasta - spaghetti, noodles etc.

If you can find the things you need before getting home...you should. Everything is closed except pharmacies, grocers (limited hours) and "essential" services. You can't count on anything being available. I am in Las Vegas..and it's crazy what's going on.

might try stores in Parker and Havasu City ig we can find parking.
other wise - ...

No rice anywhere at all. FYI try Smiths' on Flamingo for groceries. We went to seven stores today and they were the last and had some things and were better stocked than most. No toilet paper anywhere.