Sunday morning has dawned bright and almost clear. It is nice to see sunshine when I get up. We finally dug out the little electric heater last night and plugged it in. So it is not so darn cold in here this morning.
We had quite an adventurous evening last night. Not of our making, well most of it wasn’t.
I think I mentioned another storm was heading our way last night. It arrived with a bang. I don’t think I’ve ever seen such bright and continuous lightening.
I set at the dinette right next to the window to use the laptop and to watch TV. [I miss my recliner – no room for it in here.] Anyway, that gives me a good view of the weather. We were watching TV when CLICK – no TV. I looked at Bill, did you turn off the TV? No. Then we realized the power had gone off. There had been a big bolt of lightning and clap of thunder just before the click. It must have hit something. Boy is this campground, down here in the valley DARK when all the power goes off. I’m funny about electricity – I unplugged my computer, phone and MiFi – didn’t want any nasty surprised if/when the power came back on. Soon the rain was pouring down again. Bill went to bed to read his Nook and I continued to watch the storm and read my Nook. What great inventions with their back lighting. About an hour and a half later I heard another click and then the satellite dish started to move. Yippee – the power was back on.
I replugged all my stuff back in, including the little heater, finished the chapter I was reading and headed to bed. Stopping first in the bathroom…Oh, Oh! As I took my second step in the bathroom my foot landed on the sopping wet rug! Well crap. I turned the light on to check out what was going on. The whole back, toward the outer wall, side of the rug was soaked. Had the wind been enough to force the rain in through the open window? Checked around the window and the wall – nope it wasn’t even damp. First things first. I had to pick up the sopping rug. Thought I’d throw it in the shower for then. But realized if I did that I’d get the laundry bag, who resides in the shower, all wet. Didn’t want that to happen.
WELL CRAP – the power just went out again!!!! And it was starting out to be such a great day.
Back to last night…So took the laundry bag out of the shower put it on the counter, picked up the dripping rug and threw it in the shower. Grabbed a couple of wash cloths and started mopping up the water. Took three washcloths. As fast as I mopped it up it got wet again. Not good, not good at all. So I started looking for where it was coming from. The only obvious place was the toilet. Sure enough the supply line to the toilet – thank goodness the supply line and not the take away parts – was all wet. Couldn’t feel anything loose, but it was definitely coming from there. Had to make a decision – wasn’t hard to make as we’d be floating if it was left to morning. So I woke Bill up, gave him a flashlight and pointed him towards the bathroom. He did some checking then headed outside. Turns out that when he was trying to figure out why the water heater was no longer heating one of the things he did was take the pressure regulator off. [This didn’t help the water heater situation.] So by late last night the pressure had built up enough to make the toilet line leak. So he shut the water off, turned the pump on and went back to bed. Problem solved until morning.
This morning the laundry is residing in the passenger seat and the bathroom rug is outside slowly drying out. Pressure regulator is back on. Hopefully end of problem.
With the power out we decided to go out to breakfast. Any excuse right?  Not a cloud in the sky, and the view is magnificent from the main road. No smoke or dust or mist in the air today. WOW.
Coming home from breakfast the clouds are already building over all the mountains.
We are having our typical Sirimarco Sunday. This is Messi - Barcelona's star. 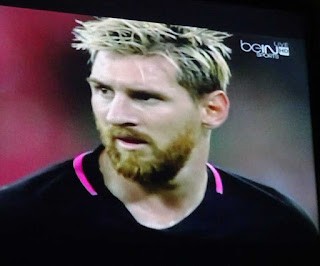 Bill is watching a Barcelona soccer game and I’m watching a NASCAR race and during commercials the soccer game. 30 minutes into each, Barcelona has a goal and Kyle #18 has spun and is already 1 lap down. 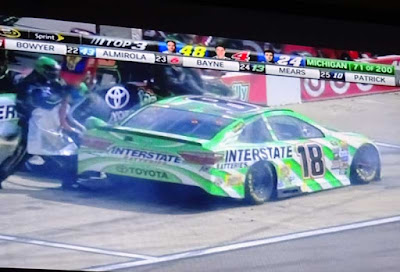 Power went off again this afternoon. Bill decided to turn the generator on. Except it decided not to come on. Another thing on the list for dealer. Sure hope we don't need it for the next week.