Well I didn’t get this finished yesterday so will do it now. Another gray and cool morning. That’s okay TV watching this morning. Race was postponed until today – also a soccer game to watch.
Got news our newest great granddaughter made her appearance yesterday. That makes 5 ggd and 2 ggsons, total 7. Prolific bunch. So back to yesterday…
I’m writing this as I watch the NASCAR race at Bristol so if all of a sudden I start to make a lot of mistakes, it’s ‘cause something happened on the track. (Raining, maybe I’ll finish before they start racing again.)
Boy I about hit the ceiling with my head earlier today. I was going over some photos when all of a sudden a screech came from somewhere and a man started talking. The weather radio had kicked in. We had been watching the black clouds overhead but still no rain. Seems like there was very bad weather all around us. 60mph winds, hail the size of 50 cent pieces, and torrential rain.  What happened to us here in the campground? Nothing – we got about 5 minutes of wind and 10 drops of rain. Lucked out. But can’t figure out how to shut the radio off.
Rain afternoons is in the forecast for the next four days. At least it keeps it a little cooler out. But not fun for going out into the desert.
Just saw “THE” Carl’s Jr ad that I HATE. The three blonds in bikinis cooking. I know the company is playing to the 18-25 year old male, but they need to remember us older folks eat fast food too.
I made a curtain to put up at night to block the front windows. I used a premade curtain and added photos that I’d printed on material. I sewed them on using a transparent thread and it caused an unexpected effect. I sewed them with a zig zag stitch, when I did the maps because of their contour the stitch was closer together so the light coming through really shows up on them. Kind of neat to see – the light has to be behind it, like in the morning just before we take it down. 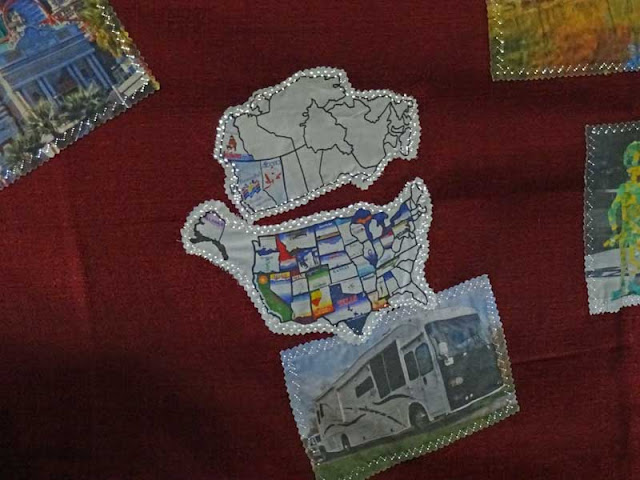 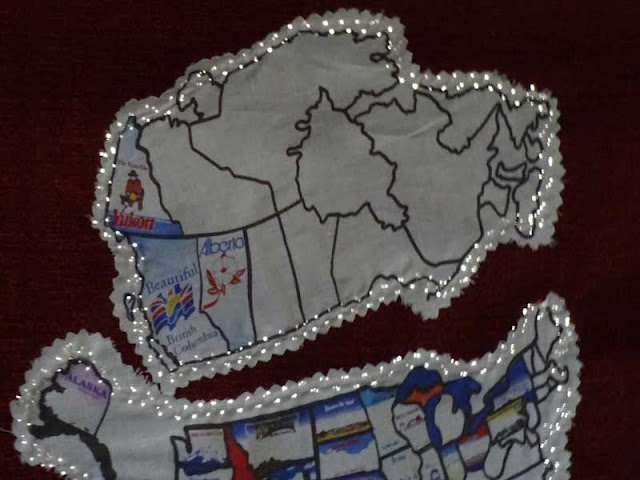 We watched the first game of La Liga, the Spanish soccer league this morning. Barcelona looked good, played with good team work. Messi looks strange with a beard and blond hair.
After that we took a ride into Sedona in hopes of having sun to take some pictures. The clouds were building but sun was shining. 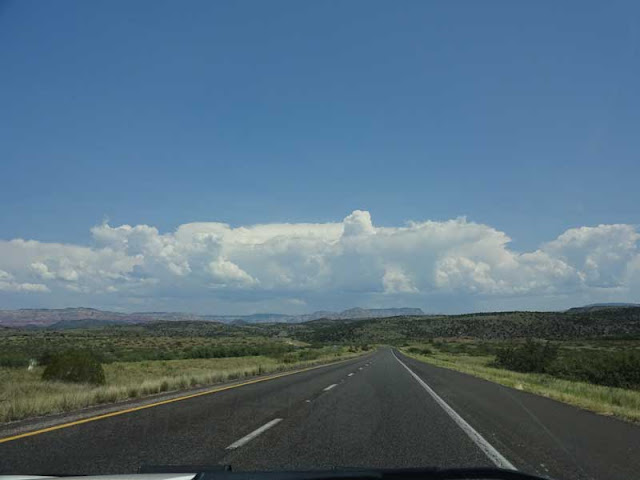 One can never have enough pictures from Sedona. Just before coming into town. 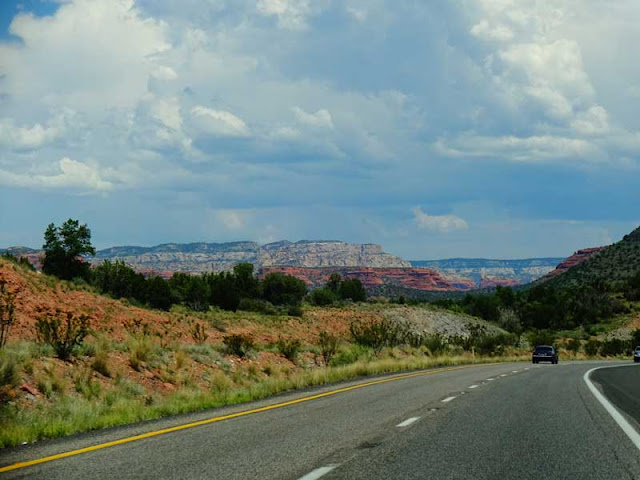 The rock on the far right side is called the Coffee Pot. Remember the old fashioned kind you put on the stove to make the water boil and go up the post to drip back through the grounds. 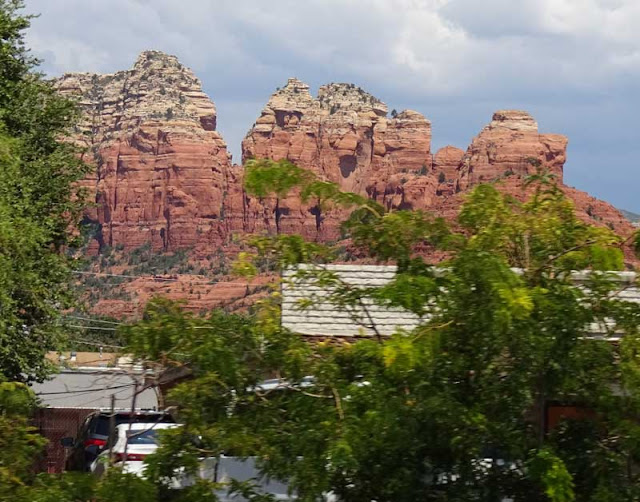 We went up the road to the airport which has a great look out over the town. A few pictures from up there. 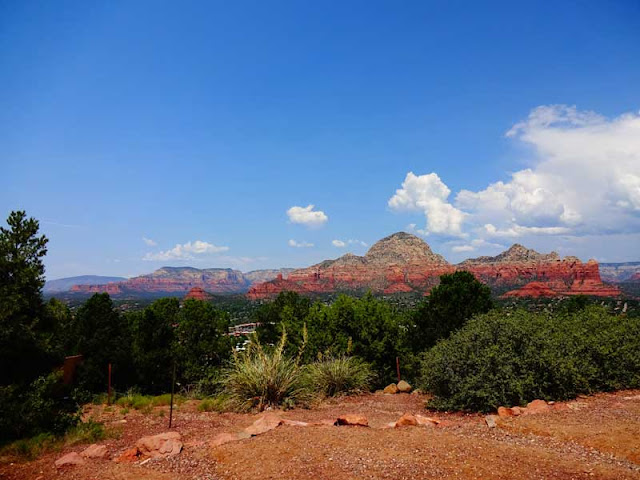 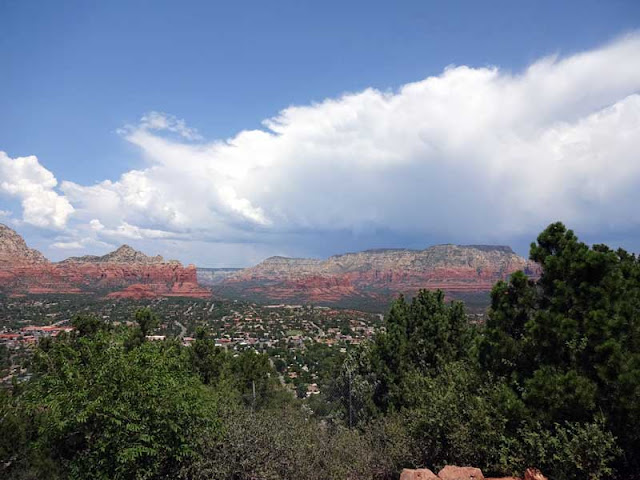 There is one red hill that has a trail to the top of it. We stopped and got out to walk up it a ways. Bill waited for me at the bottom. His knee is bothering him. This getting older sure brings lots of extras with it. Any way this is the beginning of the trail. Up the rock steps. 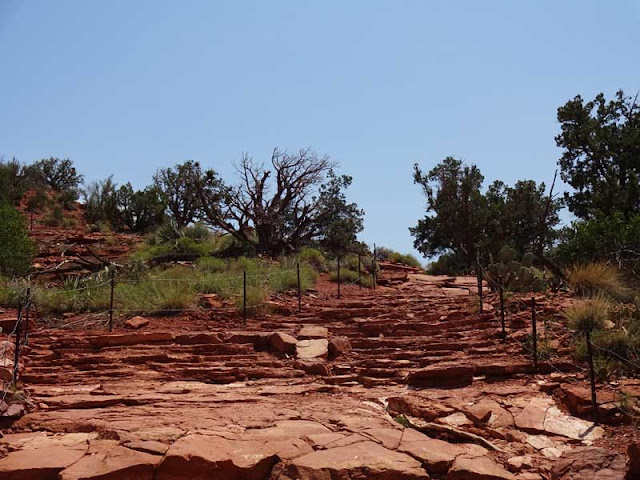 Looking forward at the vegetation - so green this year. 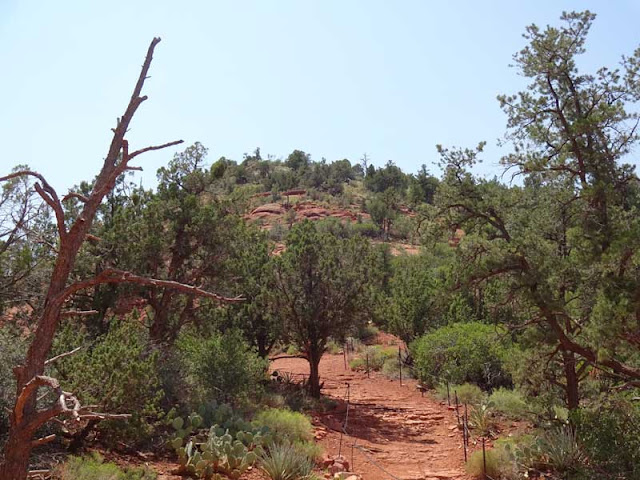 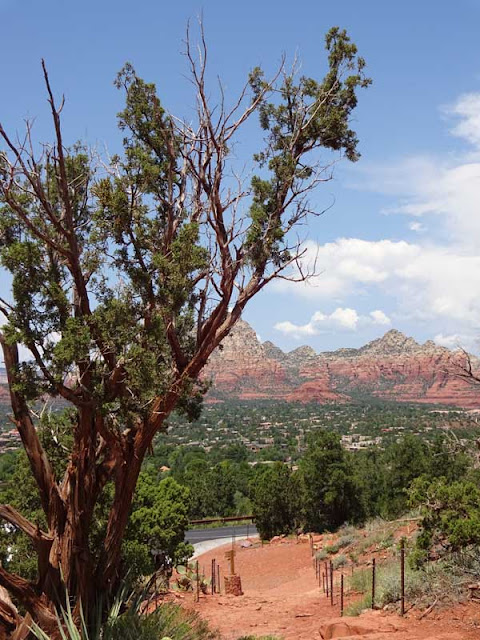 Just pictures of the scenery. 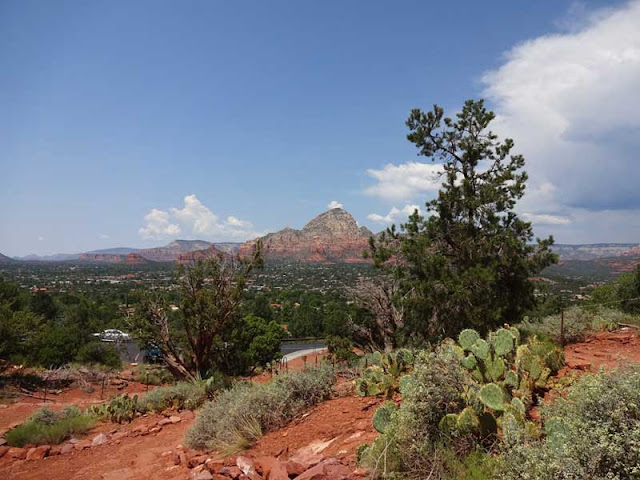 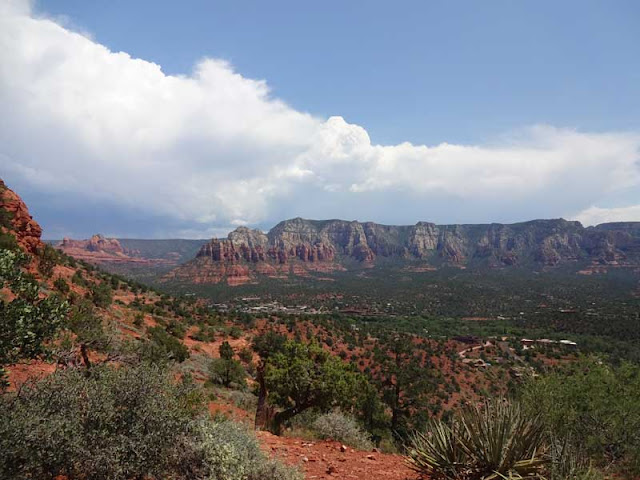 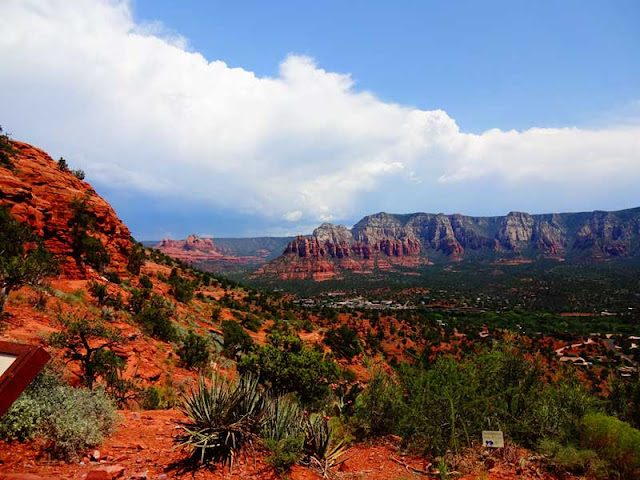 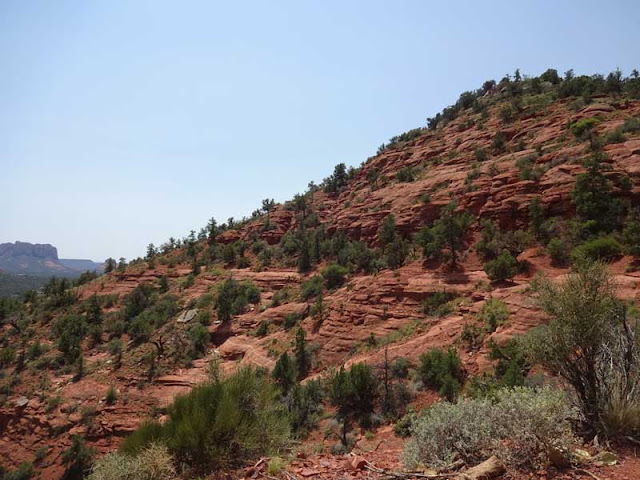 Just looking out over the town. Never can have too many pictures of this area. 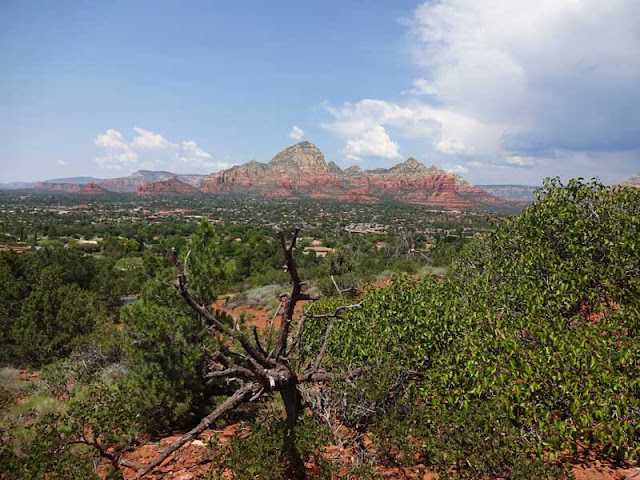 Clouds getting heavier and darker. Heard a loud rumble of thunder and the motor of the jeep starting up. Time to turn around and head down hill. 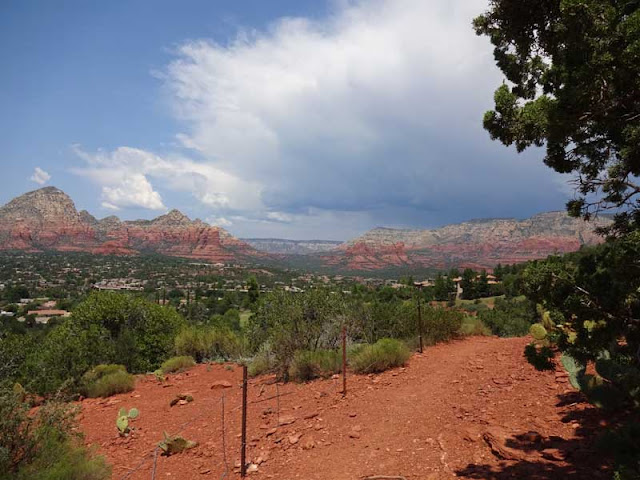 A better picture of coffee pot rock, on our way home. Just too much traffic in the town of Sedona. 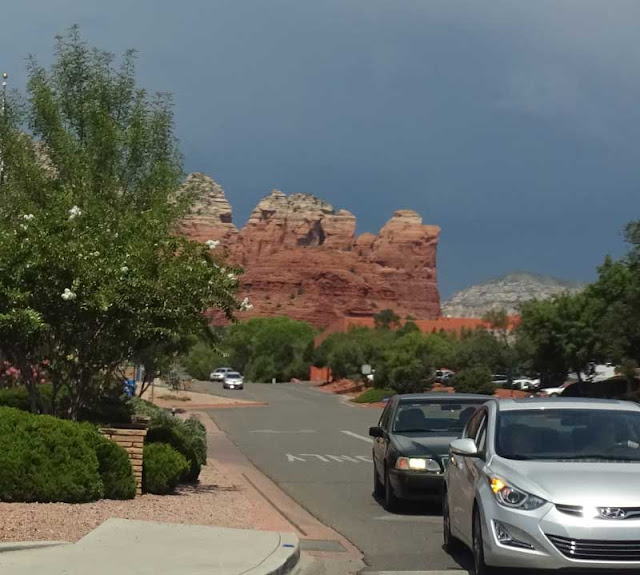 The clouds were really building fast as we headed home. 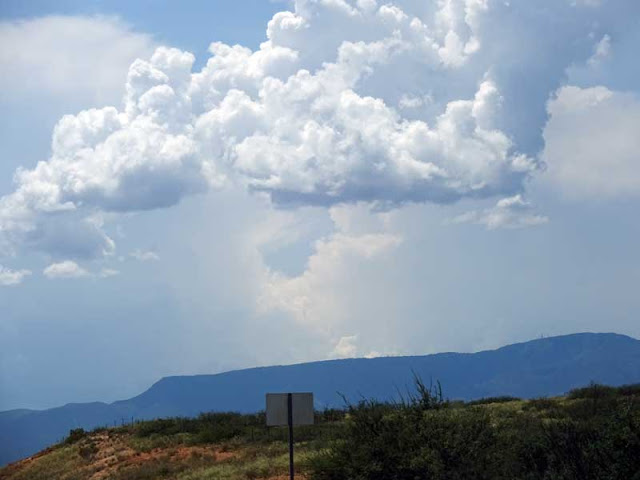 We stopped for lunch and got a couple of groceries. Then back to the campground. Turned on the TV and discovered it had lost the satellite signal. Too many heavy clouds around us. Eventually it came back on. NASCAR race was finally postponed about 9:30 our time - 12:30 there. Read a little more then went to bed.

That is any interesting header photo. What do they call that effect? Cartoon? But I really like what happened with that transparent thread. I'm thinking, you could write "Merry Christmas" on the curtains, with the lettering facing out. Then from the outside, walkers would see your greetings. It could be subtle, or if you used a satin embroidery stitch it would be bolder. Did you look at your curtains from the outside after dark? Or maybe a large map of the U.S. and Mexico with a star in each state you've visited.

We didn't get any rain in Sedona Saturday in the Chapel area.

It is called illustration - usually I can't figure out how to get to it. But somehow it got there itself, didn't realize it until I downloaded the pics.
Haven't looked at the curtain from outside at night Will try to remember to tonight.