After the storm last evening in Williams we got a rainbow. And REALLY cool weather. It got below 60 during the night. LOVE it. 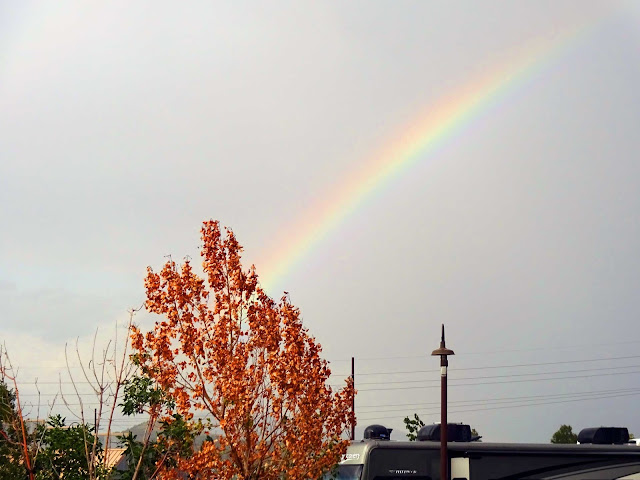 A field of flowers at the end of the campground. Really like this campground Grand Canyon Railroad Resort. Especially with the Passport America prices. Can use PA for 5 days. I think we'll be coming back here and maybe take the train to the Grand Canyon. The only drawback is the 6500 foot altitude. But that's why it is cool. 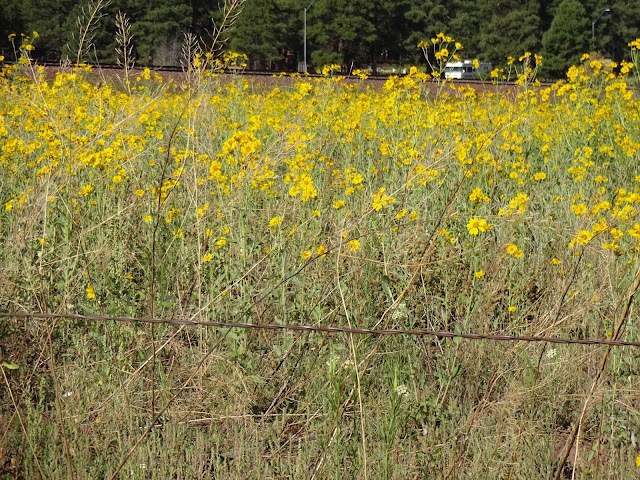 Left there this morning at about 8:45. Weather was still cool then. And sunny. Another field of flowers along the I-40. 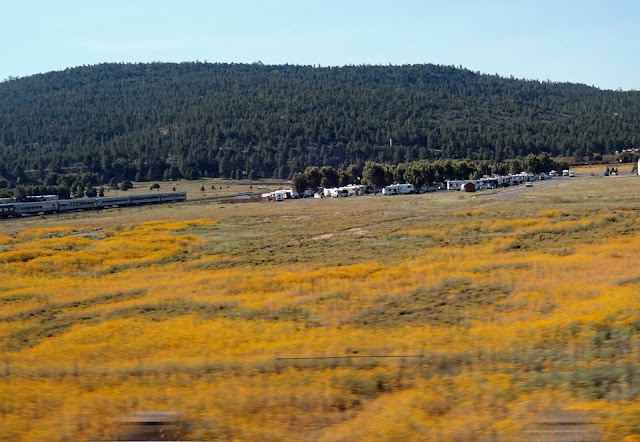 This is the I-40 - one of the better parts. And we were complaining about the Mexican roads. Ha. 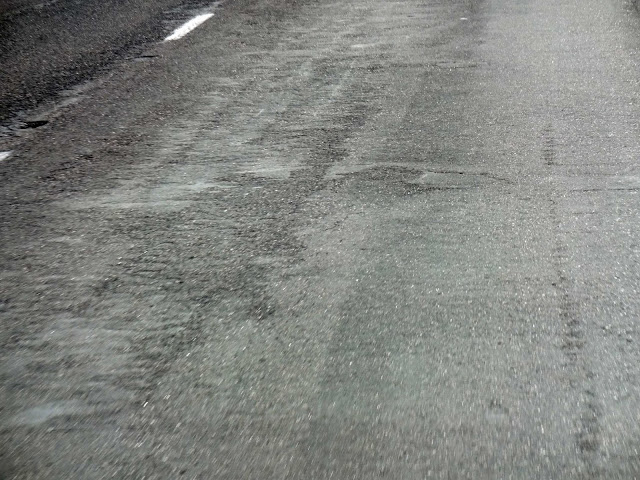 The pot holes could eat the truck! - Speaking of trucks we passed a horrific accident this morning. Could not tell what it had been. Just a pile of rubble left. Probably a semi. 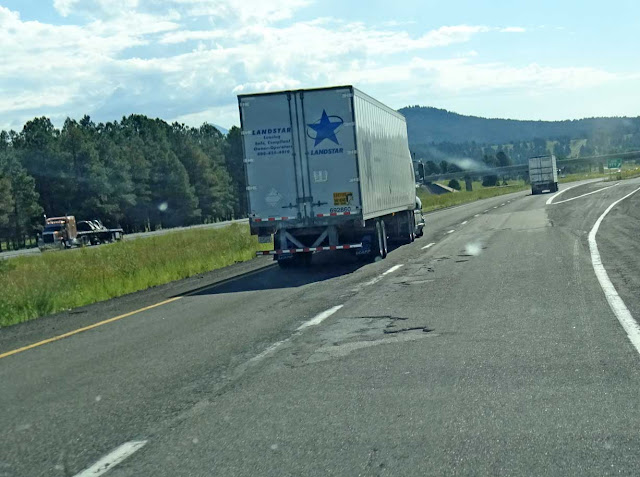 And this is the I-17 towards Phoenix, not much better. Shame on Arizona. 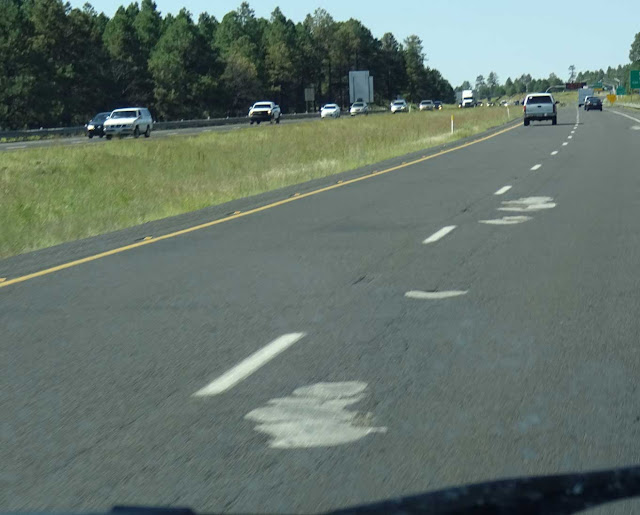 I don't think this sign would make me feel a whole lot better if I was loosing my brakes. 5 more miles and lots of curves and all down hill. 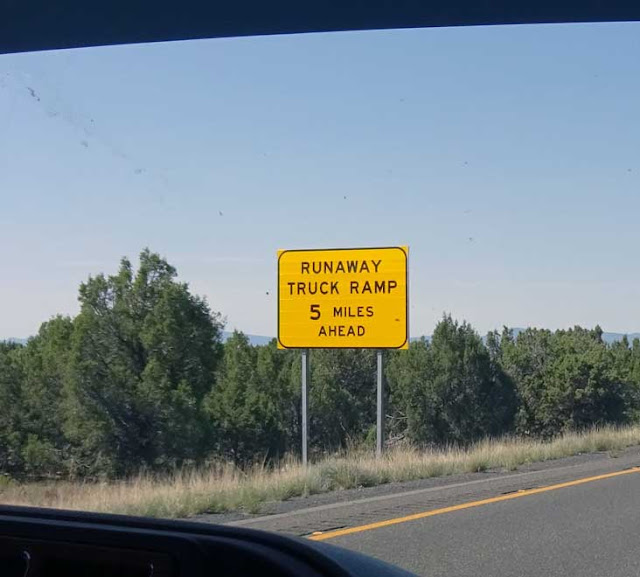 After getting settled into the 1000 Trails campground on highway 260 between Camp Verde and Cottonwood, AZ we went out to lunch at Georgies. Love to eat there. Always good food. They only serve breakfast and lunch and on Friday nights dinner. This is Bill's open faced Rueben sandwich with fries. Says it was very good. I had a BLT and coleslaw and ice tea. $15. 80 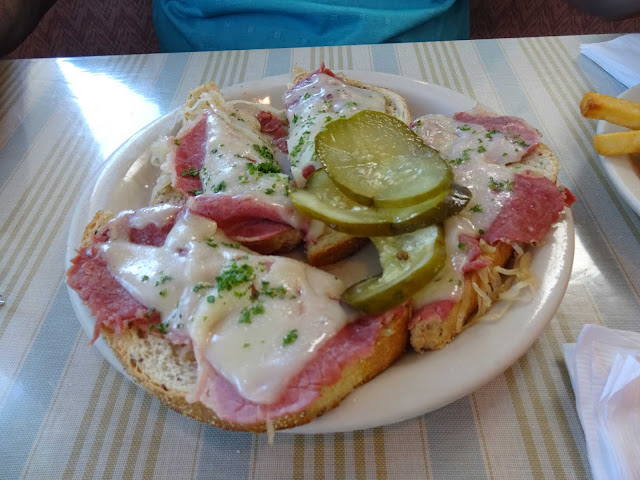 Heading back down the hill into the campground. This is a really big 1000 Trails park and really nice. BUT 70 of their sites do not have electricity - some kind of problem with the wiring! Looks strange with so many spots empty. 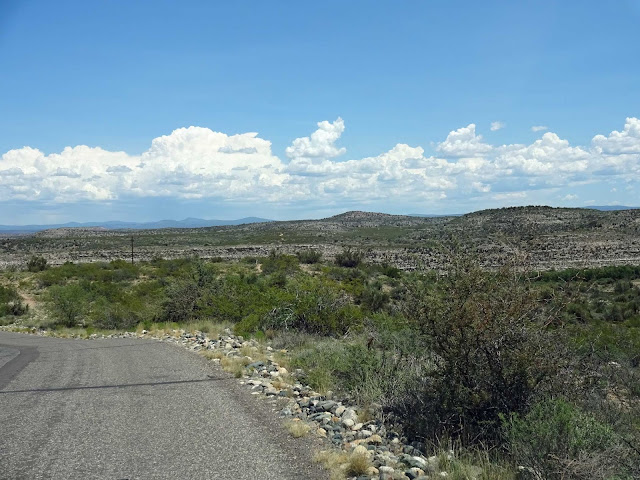 Our spot, we are almost all by ourselves. There is no WiFi in most of the 1000Trail parks, just in the club houses. But our MiFi kind of works here okay. Keeps switching from 3G to 4G to 0G. The Direct TV works good though. 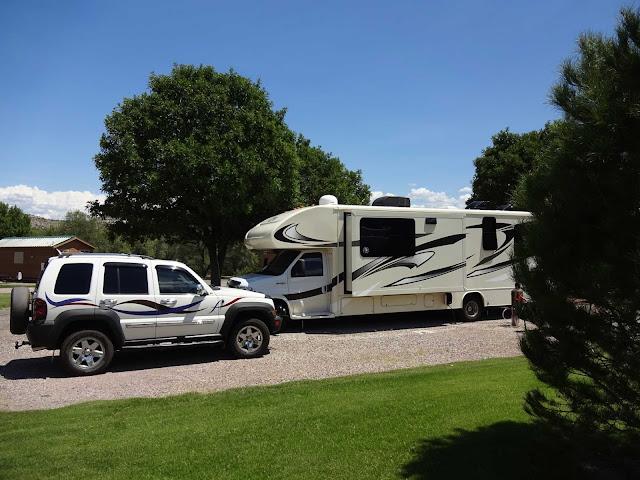 Looking towards the end of the section we are in. None of the empty spaces have electricity. The grass is nice and green though. 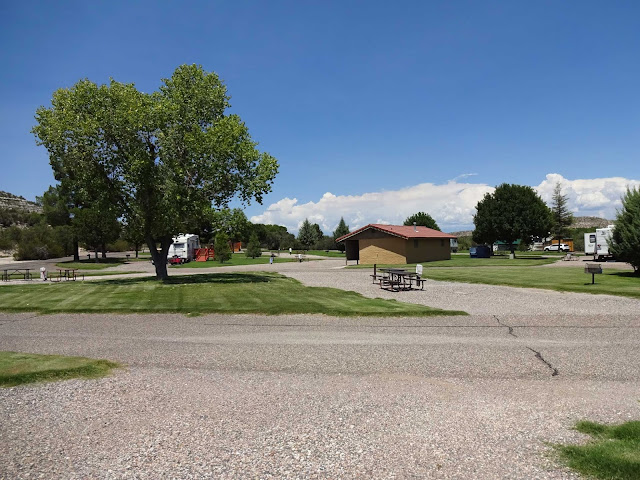 Since I've been sitting here writing this the sky has lost almost all of its blue. Here is the weather for the next week. Lots of maybe rain. At least it will be cooler. Will try to do things between drops.

Watching a soccer game now. Between two Spanish teams for the Spanish Cup. Hope Barcelona wins. (nine minutes in and Barcelona has a goal.) And right after it will be a truck race. So guess we'll be inside most of rest of day.
The latch on the refrigerator doesn't want to seem to catch fully - twice on this trip the door has swung open at our first turn. Good thing I put the expandable bars in front of all the shelves. But will have to remember to SLAM it when we are traveling, until we get home and take it back to dealer.
Well Barcelona won and then we had a rain storm that shut the Direct TV down.  Then the truck race has been delayed by rain back east. We still a sky full of black clouds. At least it cooled down for a while.
Posted by Carol and Bill at 6:27 PM