A birds, iguanas and brides kind of day

Sunday morning and it is cold out - about 55 - well cold for here anyway and it is a damp cold so it feels cooler. The birds are out squawking and walking on the roof. Well they are just going to have to wait awhile. My job comes first - then their feeding. Boy by 9:00 I'm already exhausted taking care of everything.
A somewhat of a nice sunrise Friday. 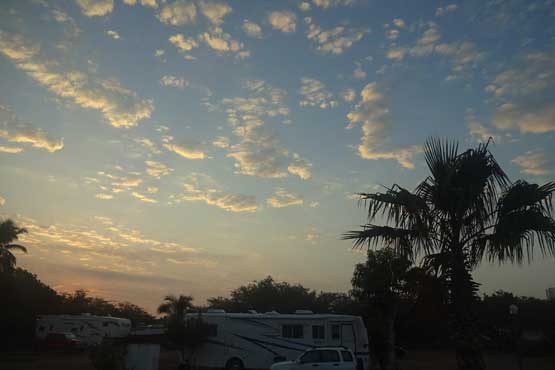 What did we do Thursday and Friday. Well we kept busy! On Thursday we had a Kardashian kind of day. Love making in the bushes and fighting in the back part of the park. Such an exciting day.
First off – the iguanas who live in the front part of the park decided they’d try making little iguanas. Right in front of everybody. In the white bougainvillea. Of course that brought everyone in the park out to watch.
Male and female “doing it.” 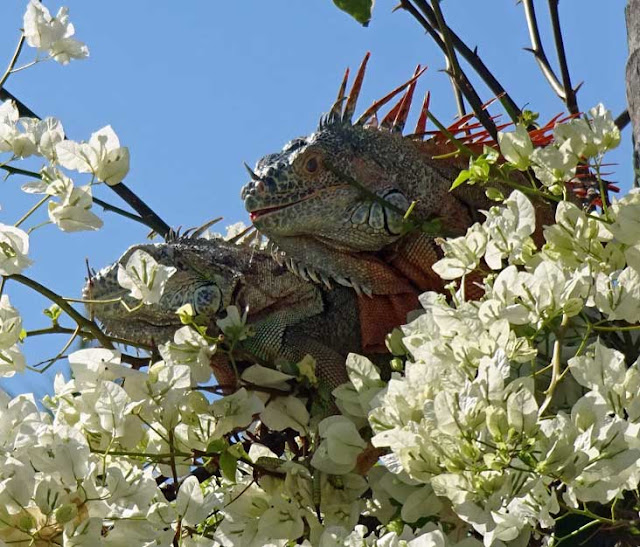 Guess they finally had enough of an audience and they separated. The orange male [I think] heading up the palm tree. 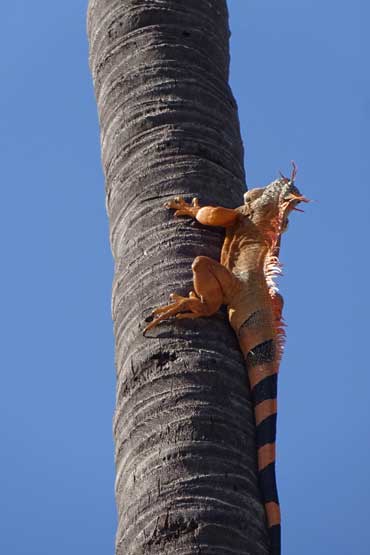 The female staying in the bougainvillea. 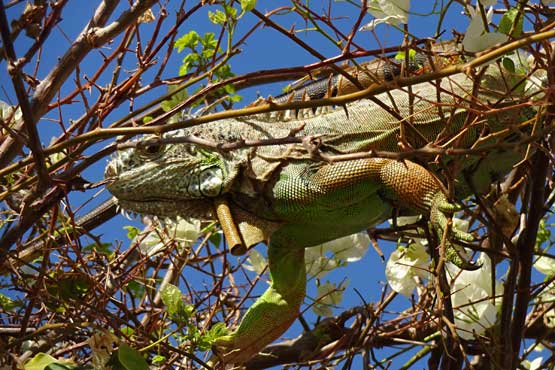 Another look at the male. He was at least three feet long from nose to tail. 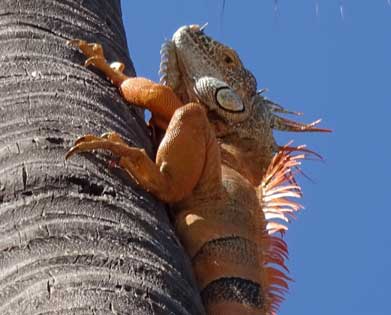 Meanwhile in the back at the bread/fruit tree things were getting interesting. In this pic you can see all the perches and food holders Bill has added to the tree. 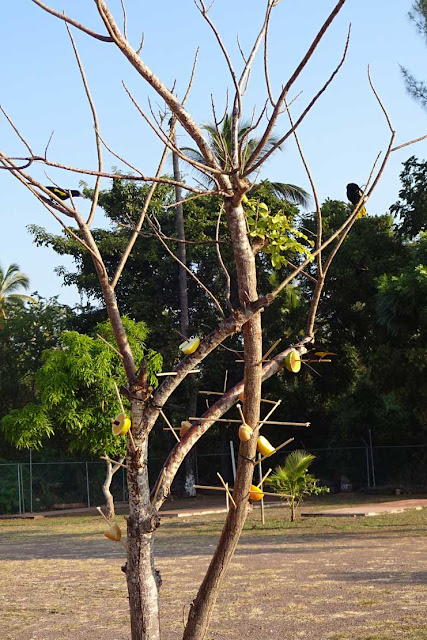 Here they are all being nice to each other and sharing. 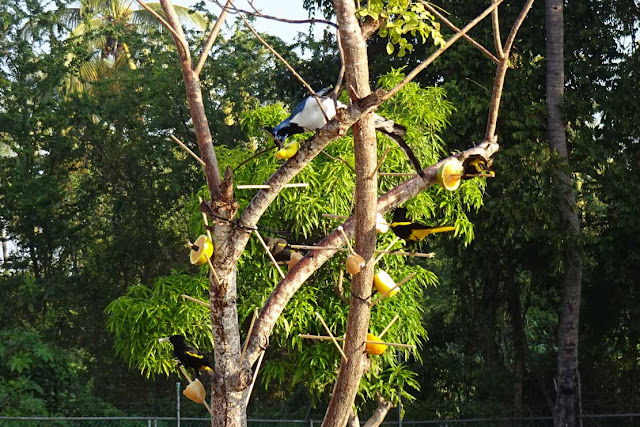 Hum…I wonder if I can get that piece of bread before anyone else does? 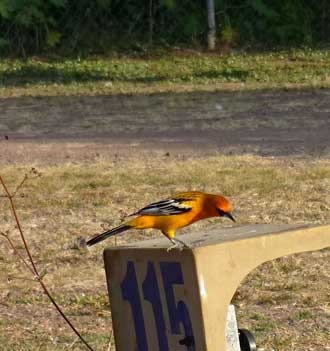 What do you think? Think we can take it away from the dove? 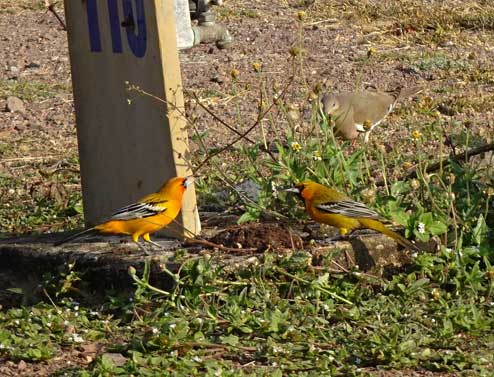 Meanwhile up in the tree wings are fluttering and tails are flapping in little disagreements. This is mine! Want to bet? A Magpie ended up with it. 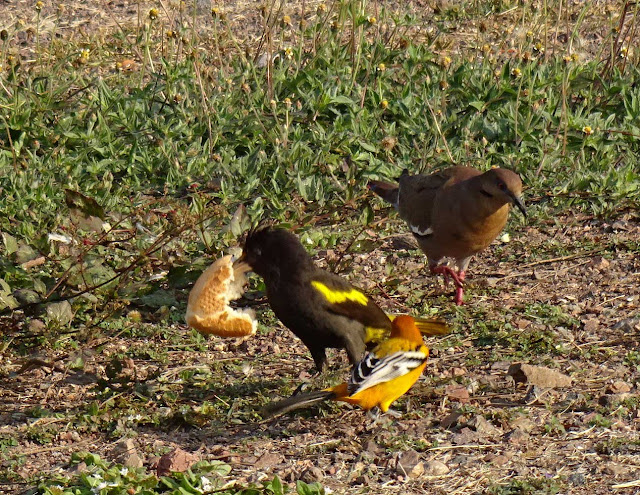 Ah, simple things for simple minds.
After watching the birds I put on my walking shoes and headed out for a walk. Got in 1 ¾ miles round trip. Thought I shouldn’t be too ambitious the first time.
Later we picked up our friends and went out for RIBS at Fat Fish. Then drove to the Centro Historico to walk around for a while. The Plazuela Machado was getting busy it being a Friday night. 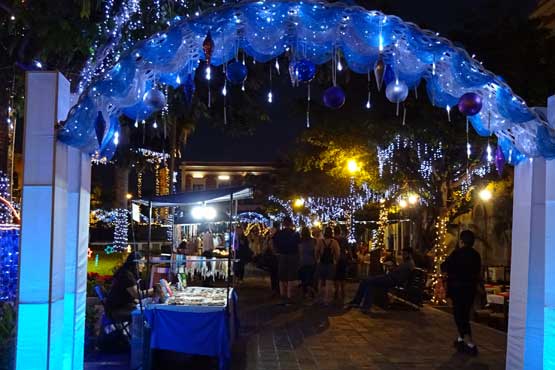 Oh look. A bride and part of her wedding party. Guess they’d been taking pictures in the plaza. They were waiting to be picked up. 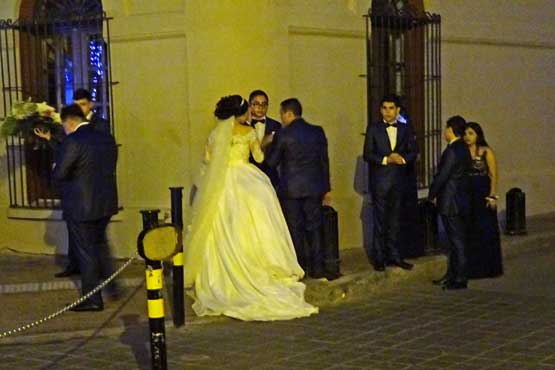 Just one of the old buildings that now has three restaurants in it. Two at street level and one on the balcony. Sure looks pretty. 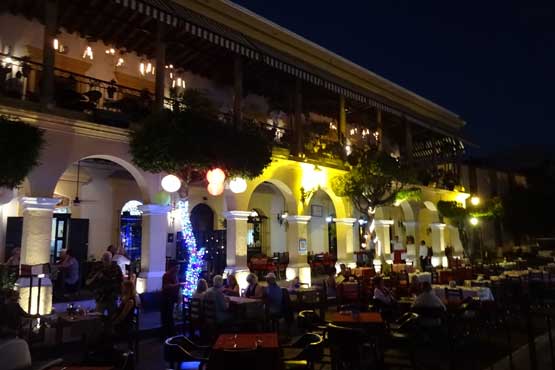 And in the gazebo a girl celebrating her 15th birthday getting pictures taken.Such pretty dresses and girls. 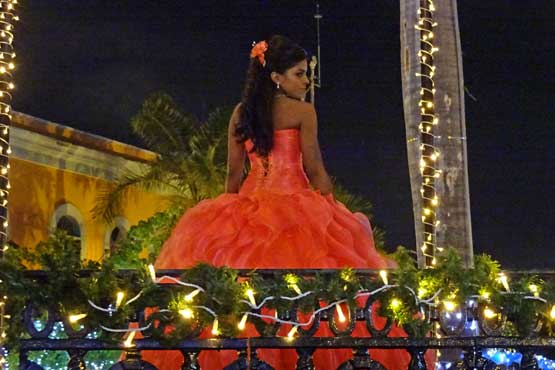 We walked up towards downtown stopping in one of the art galleries as we passed. It is amazing inside. 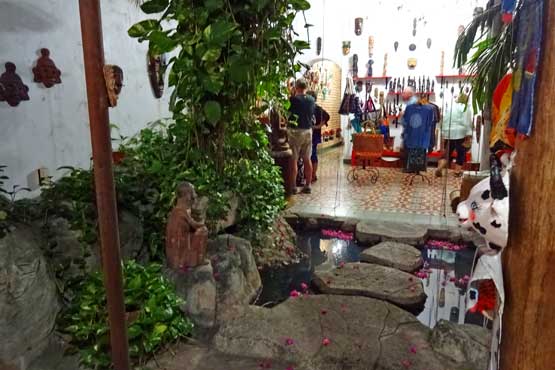 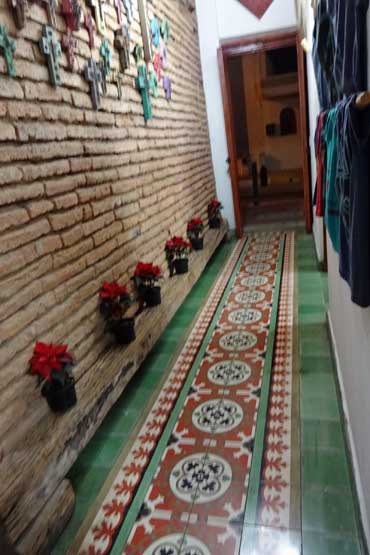 Passed where the camera repair man used to be – the building now has a for sale sign on it. So will need to find someone else to get the lint off my camera lenses.
Got to the Cathedral and found a wedding in progress. Another bride. Must be something in the air this time of year. 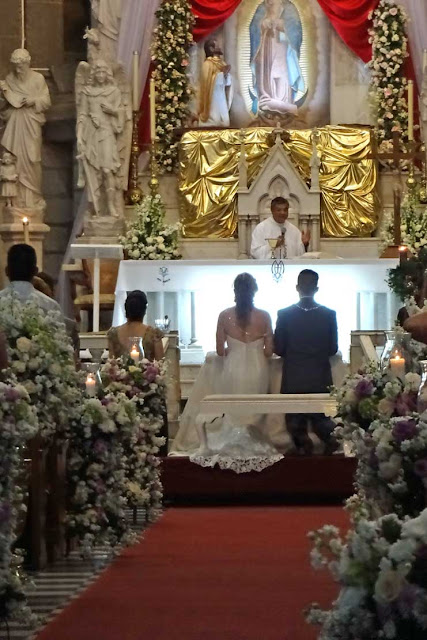 There were a couple of little girls all dressed up in pretty lavender dresses. 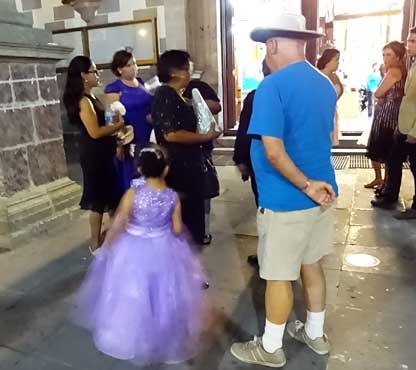 Kept walking back to the plaza and found yet another bride. More pictures being taken. 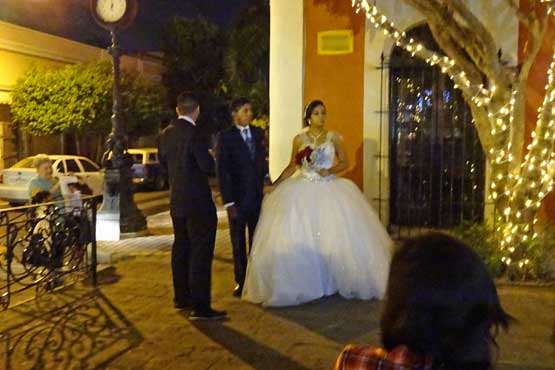 Finally in the car and home. My Fitbit buzzed me at 10,000 steps. YES! Now I just need to keep that up.
Yesterday, Saturday, was another busy and full day. From a trip to La Noria to dinner in the Plaza again.
Posted by Carol and Bill at 6:45 AM

If I were you, I would never want to go back to Vegas. You find so much to do in Mazatlan. Plus so many entertaining things to do. I love the Iguana story the birds and the weddings.

There are a lot of things to do in and around Vegas - not connected with the strip - we just need to get out and do them.