Thought I'd make a comment about the weather today. For all of you experiencing the Polar Vortex. I want you to know it isn't perfect here either. The humidity has gone back up to the muggly stage. But other than that - sorry. 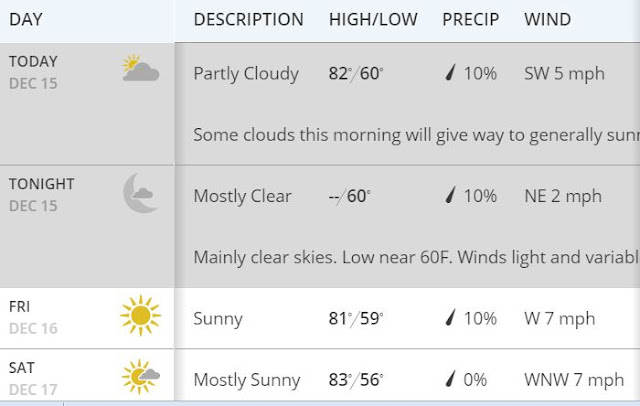 Way back to Tuesday, continuing on with our day trip. Re-posting map we will be going from just a little before point 2, Concordia, to Copala point 3.

After we left Malpica our first stop was at our friend Antonio’s house to give him some of the freshly baked and smelling so good bread. But he wasn’t home. According to his daughter he and his wife were in Concordia. Bill told her to tell them we would stop back later [we left the bread] and see them on our way home.
Also before getting to Concordia we took our unsuspecting captured tourists to see The Laundry Ladies. There is a natural hot springs just before town where the government has built a laundry facility. Four big pools, the first being the hottest the fourth the coolest. Alongside the pools are laundry tubs with built in washboards. There are several tubs and most were being used. The women were talking as they laundered their clothes and their children were playing. 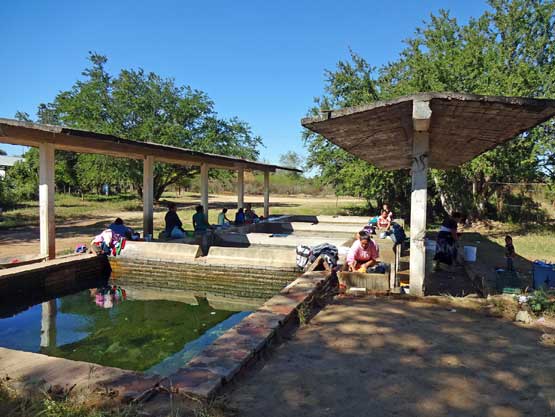 Lots of laundry being done. After soaping and rubbing, they scooped clean water out of the pool to rinse the clothes. 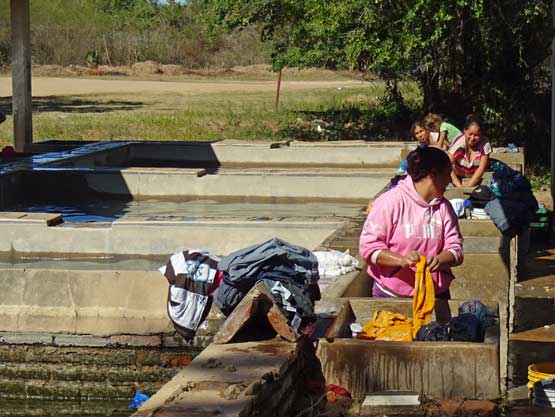 The boy with the bicycle had just picked up a load of clean wet clothes, in the plastic bag, and was taking it home to his mother to hang up to dry. 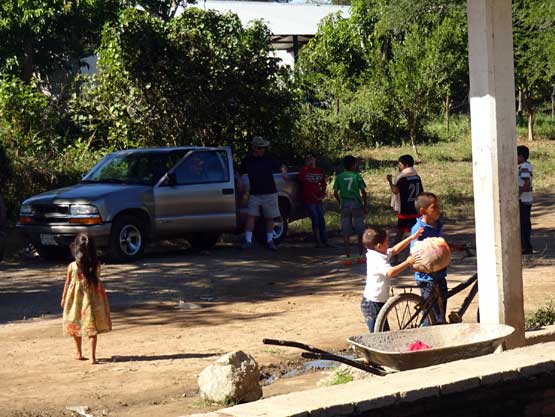 There are also clothes line to hang the wet clothes on. Though some of the lines were made of barbed wire – have to be careful when hanging. 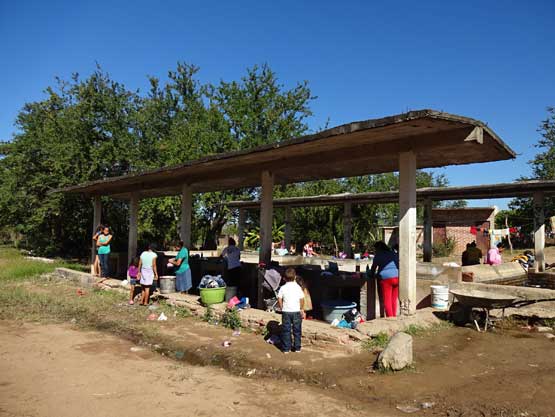 A couple of the ladies remembered us from years past and one of the kids recognized the Jeep - from which always comes candy.
Back on the road to Concordia. Concordia was originally called Villa de San Sebastian and was founded in 1565. The last census counted a population of 8,328 people. It was originally a mining town, in the later years it became known for its hand-crafted and carved wood furniture.
Driving towards the center of town. One way narrow streets with lots of wires going everywhere. 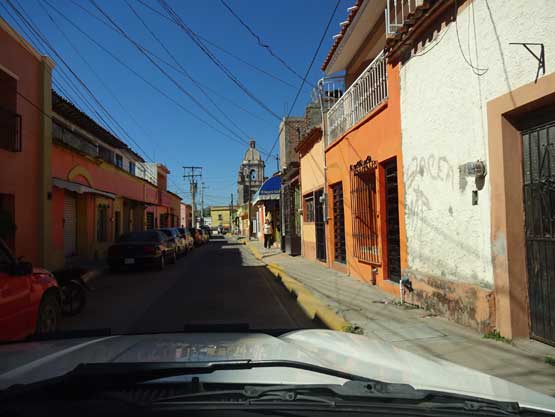 The Church of Saint Sebastian, built in the 18th century. Its baroque style façade is carved red stone. The beginnings of a Nativity scene setting up out front on one side. 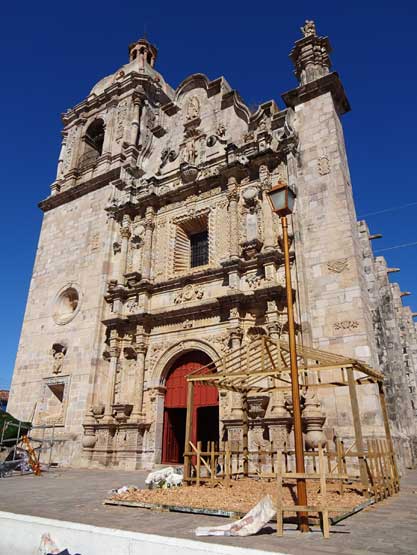 And a big Christmas being put together on the other side. 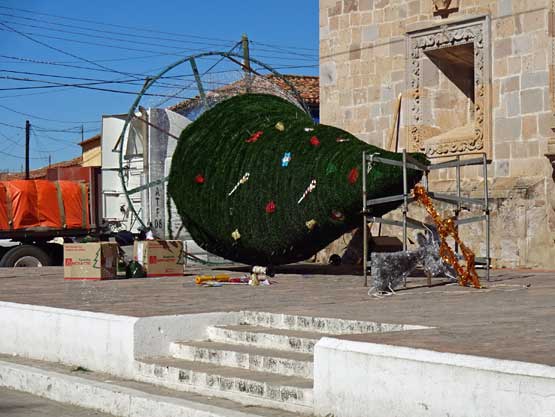 A lot of renovation going on in the Plaza. New stone work going down. The gazebo is being repaired. All of its beautiful murals are gone. Sure hope they put them back. Going to go into the church through the big old wooden doors. The front of the church has so much detail it is hard to take it all in. 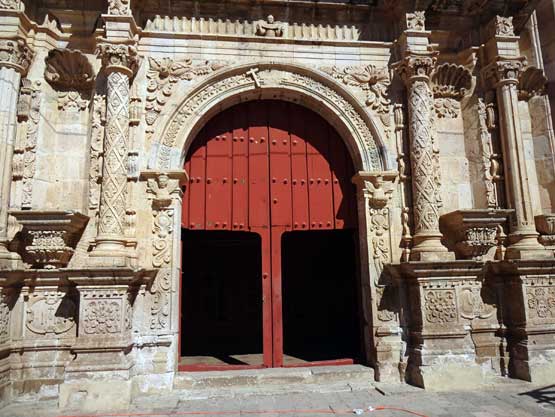 Inside. Large Virgin of Guadalupe display on the left side. 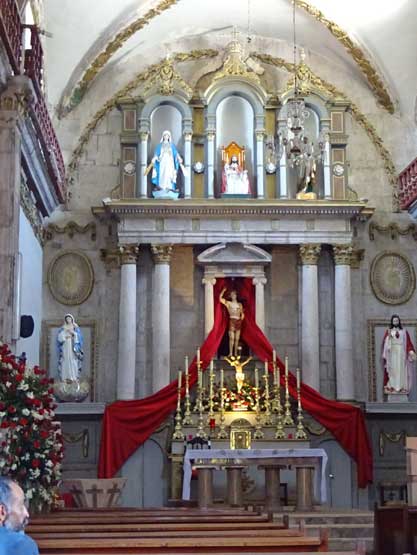 The City Hall, constructed between 1905-1910. It is a French style of architecture. Notice the paint job on the City Hall, only the front is plastered and painted. Another mother-in-law paint job. 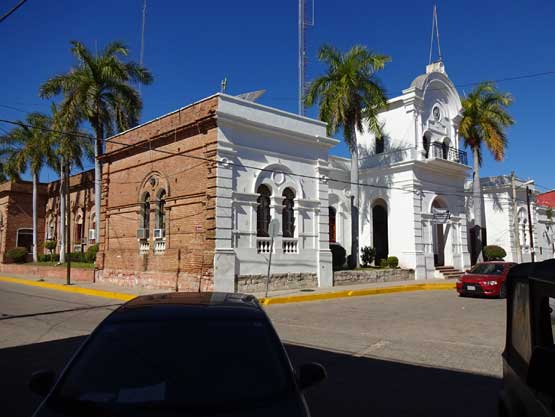 One of the murals inside the City Hall depicting the turbulent history of the city. 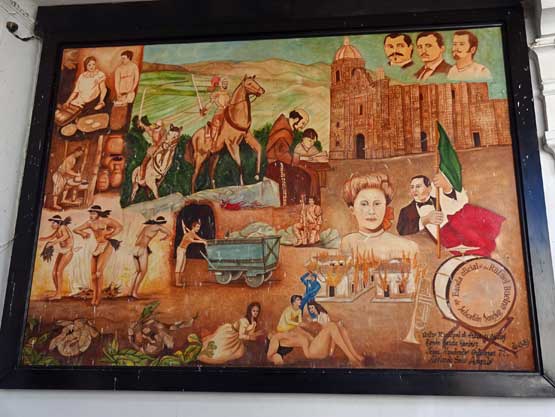 “In 1616, the oldest settlers, the majority of whom were from indigenous tribes, took up arms against the Spanish Crown, which resulted in the collapse of the mining industry in Copala. Two centuries thereafter, the War of Independence began in San Sebastian, following the triumph of the insurgents in El Rosario on December 27th, 1810. The year 1865 saw the French invasion of the State of Sinaloa, the incursion beginning in Durango and extending into Concordia. The French looted and torched villages, and burned the former Concordia, La Villa De San Sebastian, to the ground.”
While looking at the murals in the city hall a group of young girls came in and started talking to us. We understood “selfie and Facebook” With much laughter and trying to communicate we got a couple of pictures taken. Some where I guess we are on Facebook. 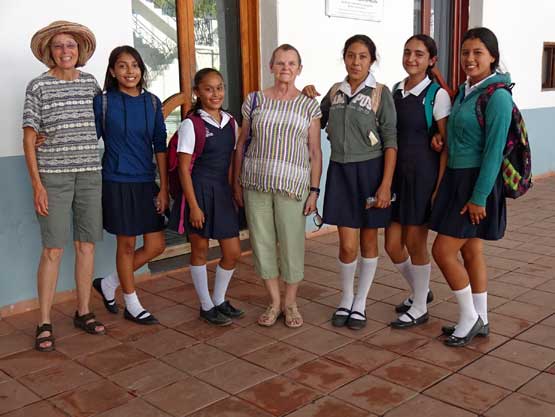 Continuing to walk through town. A couple of years ago the government gave the home and business owners enough paint to paint all the buildings in town. The only problem was the paint was either yellow or pinkish orange. So the whole town was painted in various shades of those colors. 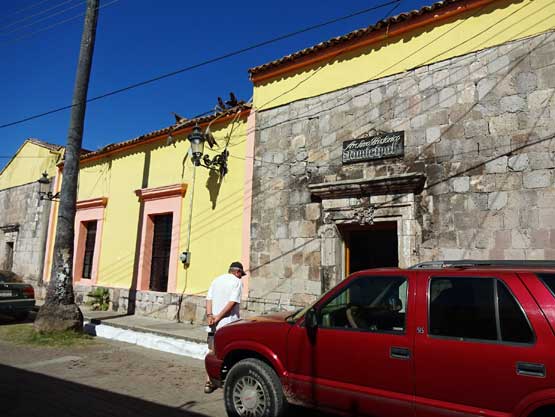 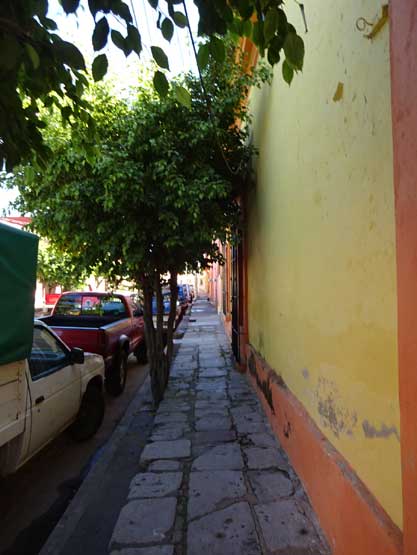 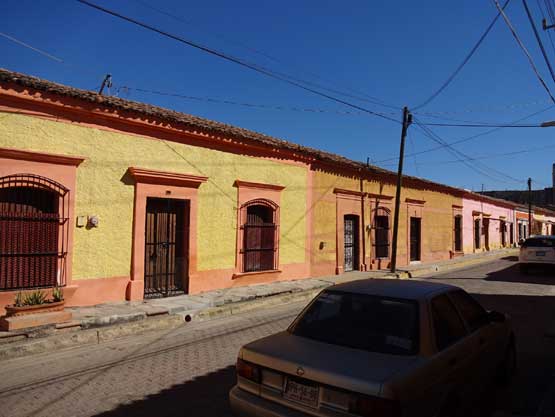 It looks kind of strange as we are used to seeing very colorful towns. 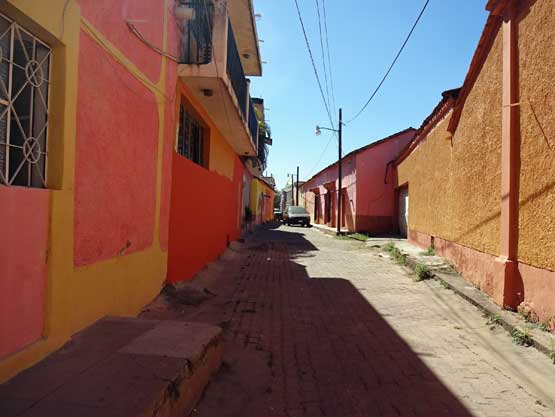 A few buildings have been repainted since then. This being one of them. In the process of doing it. 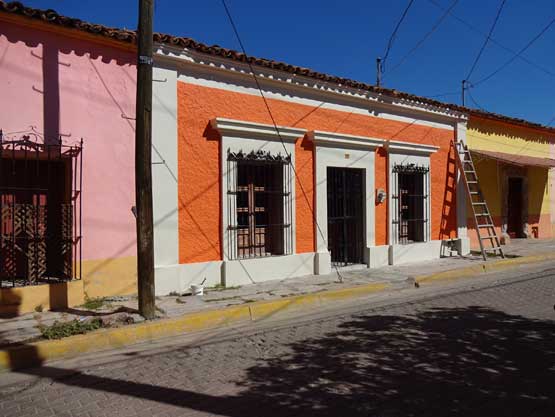 And there are a couple of businesses in green and blue.
As we were getting back into the car we heard Bill being called. It was Antonio and his wife. They had recognized the car and stopped to look for us. It’s a good thing we kept the same colors and design on Willie. Talked with them for a while and told them we’d stop by their home on our way back to Mazatlan.
Leaving Concordia behind a pick up full of big coconuts. 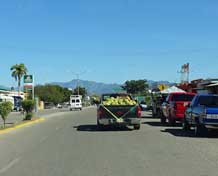 On our way to Copala, one of the straighter parts of the road called "The Devil's Backbone." You hope you don't get behind a slow moving truck, as there is no place to pass. As it was we got behind an old truck hauling gravel. After the first few stones hit the Jeep Bill backed way off until he found a little straight road to pass on. This road used to be the only way to Durango before the new Toll Road was built. 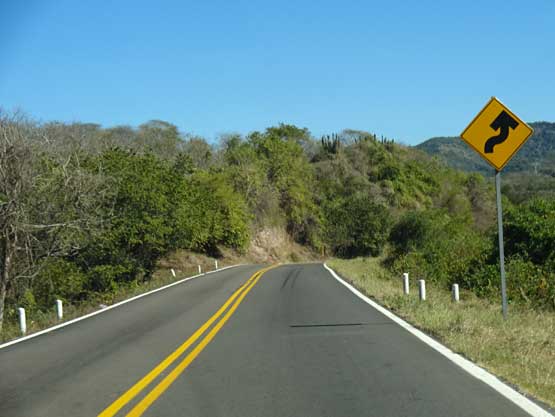 I’ll leave the rest of Tuesday's adventures there for tomorrow.
But will skip ahead to our visit to Antonio’s house. He collects wind swept pine tree roots from the Sierra Madre mountains up by Durango and carves wooden faces from it. Antonio and his wife. He is going to show us some of his carvings. 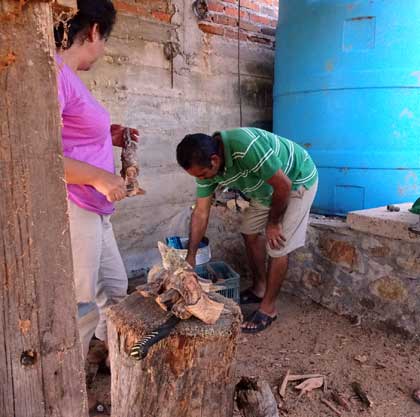 Some of his pieces of carving in various stages of completion are on the stump.
Some of the wood he will carve. 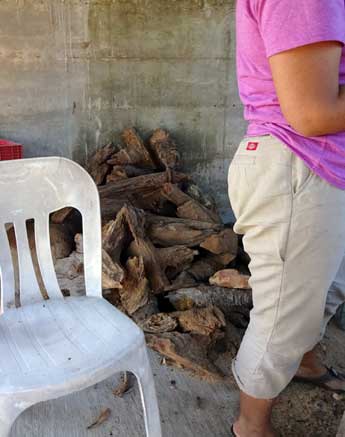 Antonio. We met them about six years ago. Now there children are grown up and have children.
Bill talking to his wife. A year ago she had several eye surgeries for a lazy eye. Everything is fine now. 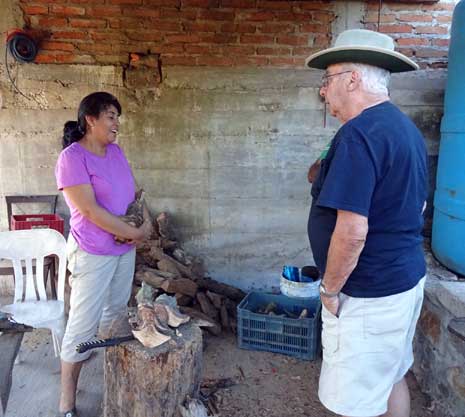 And back to Mazatlan. We actually had a busy day Wednesday too, even though we’d planned on doing nothing. But that will keep for another day.
This blog took 2 1/2 hours because I've sorted through all the pictures. Including the ones for the next blog.
Hope you enjoyed Concordia as much as we do.
Posted by Carol and Bill at 6:23 AM

Yes I did enjoy your Concordia pics and info. The ladies doing the wash sure get a lot more exercise than we do with all our modern equipment. I can't believe how they get the clothes so clean when all they have is manual labor. the few times I have been there I have been so impressed with how much they can accomplish with so little.

They have some pretty strong arms on them. I washed all clothes by hand for seven people for a couple of months long ago. It is not an easy job.

I really am enjoying your posts. Thank you.

The humidity is doing me in :(

??? Sunday at 7PM at the Plazuela Machado? Send me an email.

I HATE the humidity, thats another reason we moved to Vegas. Will let you know about PM.