A fun and busy Friday in Mazatlan

We ended up having a really busy day on Friday. So much so that I thought today was Sunday!
Fed the birds first thing, sat outside drinking our coffee watching them. At one time there were 17 of them in and around the tree. It was funny today. Some of them started to get really aggressive and running off others Even the dove went after a woodpecker over a piece of bread. Going to try and post a video of them later.
Then we went to Torres for breakfast. We sat in the warming sun and watched the waves on the ocean. We had a small fruit plate that we shared, I had oatmeal and Bill had orange French toast with a caramelized banana, both had coffee. US$13.00
As we were leaving the restaurant and heading back to the car we ran into Mike and Lorie, they were investigating the restaurant we rave so much about. We were on our way to the Gran Plaza Mall to buy more GBs for the Internet. So they came along with us. First we got the GBs – the important things. And then Bill went to the graphics lady and had a couple more of the signs on the back window of Willie redone. She remembered him from last week. 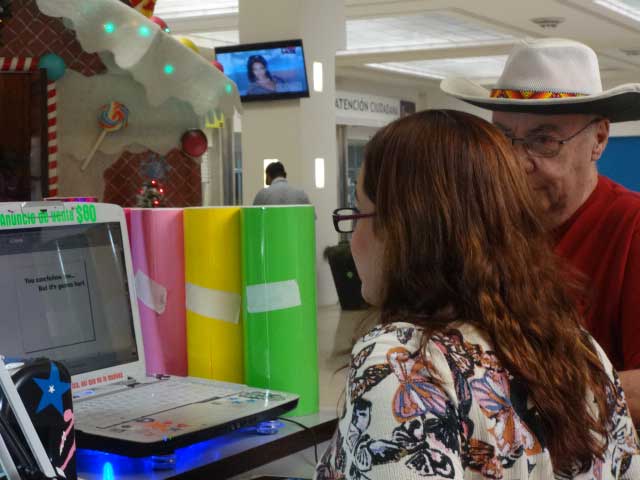 So many colors to choose from. 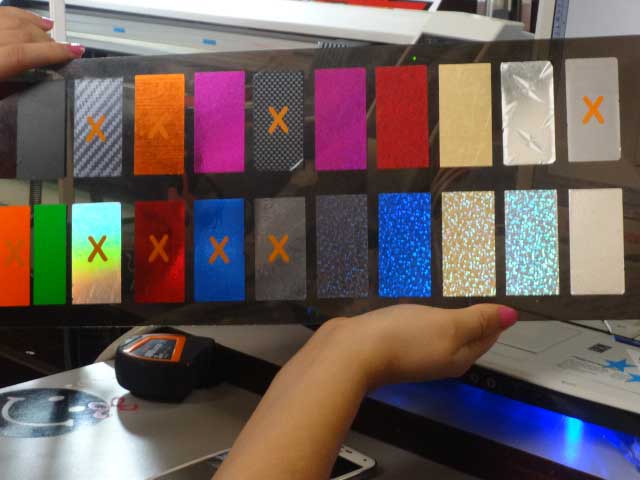 Walked around the mall checking out the Christmas decorations while waiting for him. 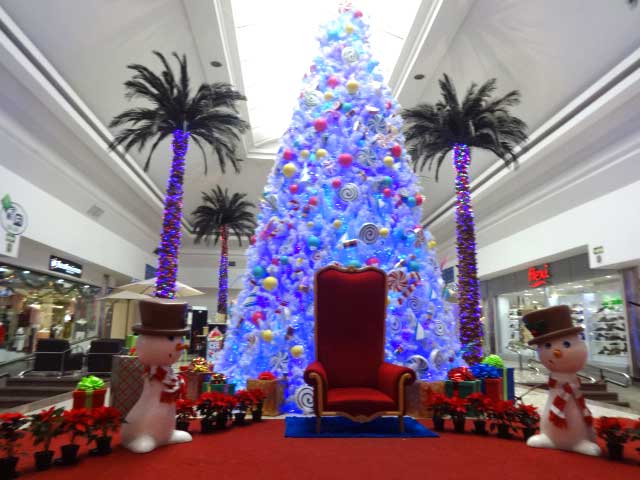 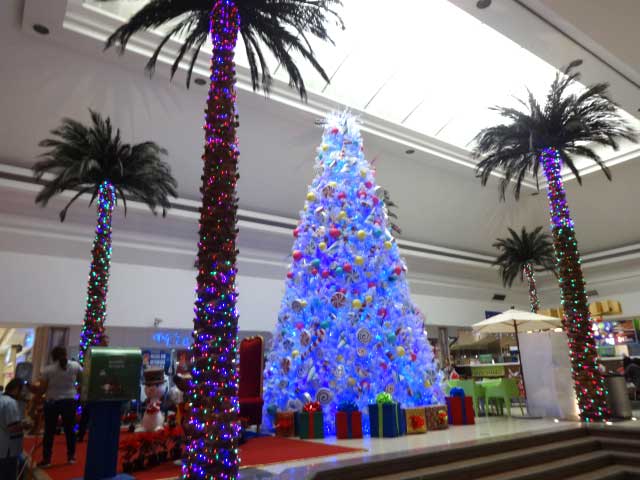 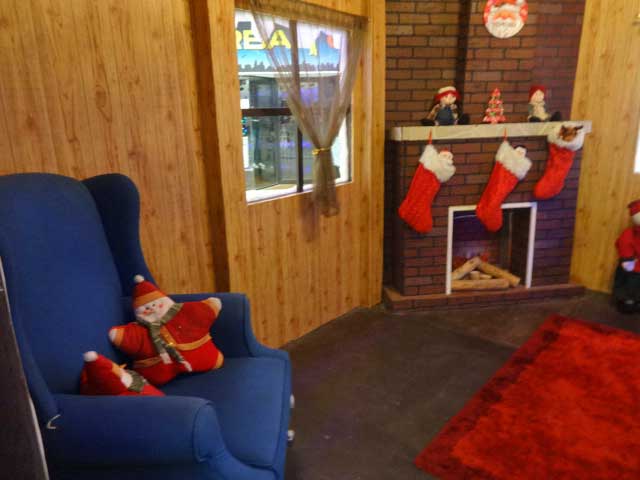 Then on home to wait for our recovered cushions. They were delivered when he said they would be. And love them. Took the upholster and Bill a while to figure out how the sofa bed went back together. Luckily I had taken pictures of it when they were taking it apart. The way the sofa used to look. 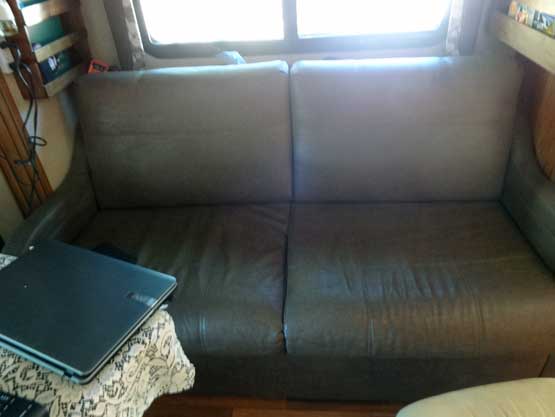 The sofa with the new bottom cushion. We've now decided that the bottom half of the back cushions also need to be done. 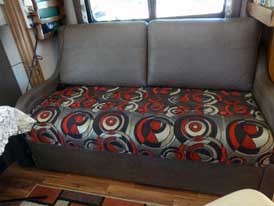 The way the dinette seats looked. 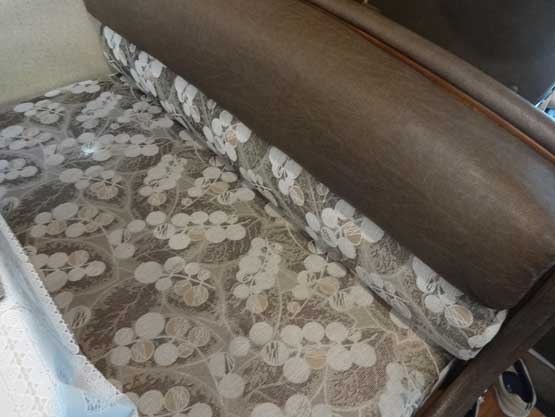 Dinette now - much nicer and richer fabric. Also all new hard thick foam. Didn't realize it was so blury. 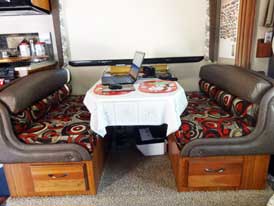 So now we have places to sit, a car to go places in and the Internet. What more could we ask for.

About 4:30 I looked out the window and suggested that there might be a nice sunset so we jumped into newly painted Willie and headed across town to the lookout point by the harbor.
Just as we got to the older section of town we heard BANG BANG, then saw red and blue flashing lights and heard sirens. What the? Turned out to be a parade of some kind. The police truck was leading it with lights and sirens going. And rockets were being shot off. Took some pictures as we and they were moving. This weekend is the celebration of the Virgin of Guadalupe. So maybe it had something to do with that. Or maybe the Carnaval queens - no idea.  We were moving and they were moving so a little fuzzy. 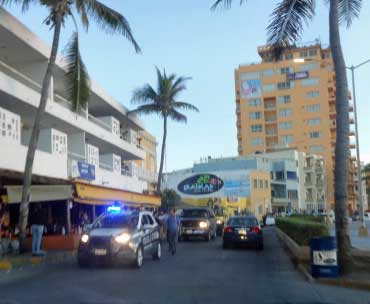 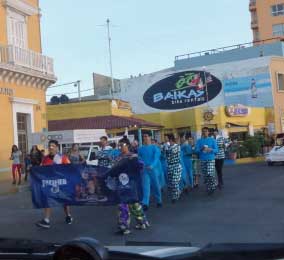 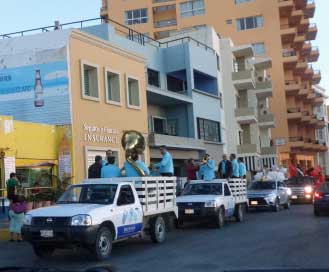 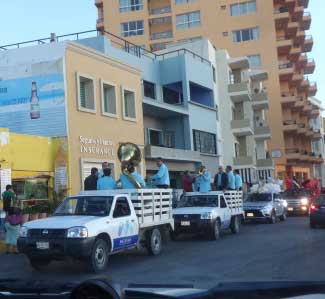 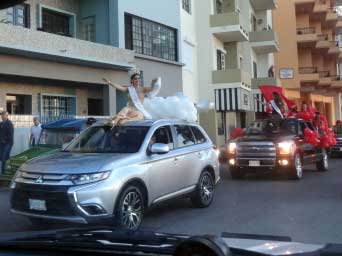 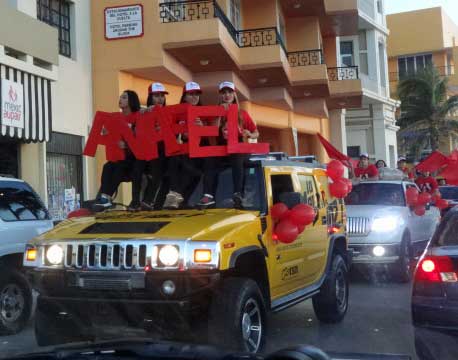 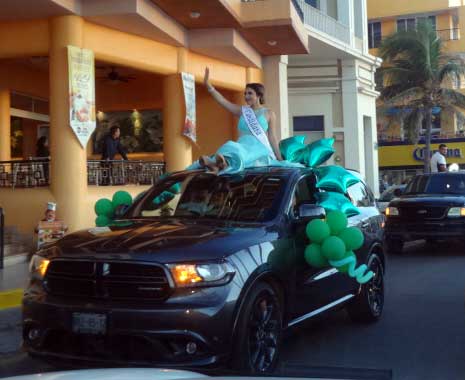 Fun to see even if we don't know what is going on. 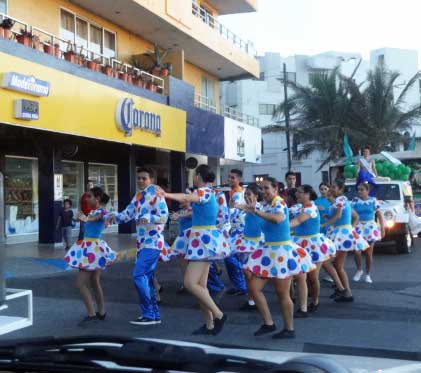 Made it in time to see the sunset, different but not spectacular. 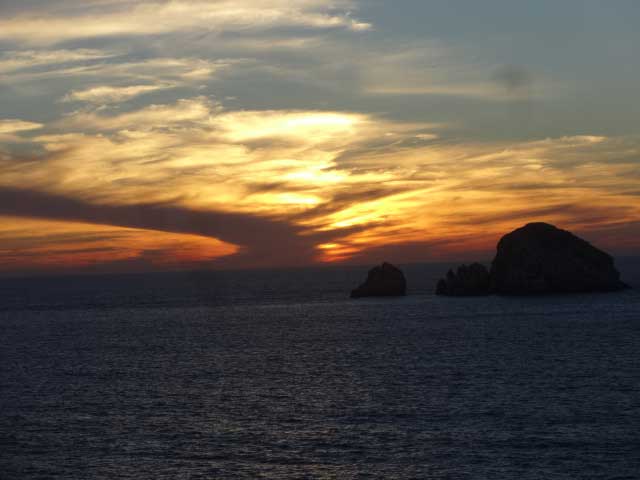 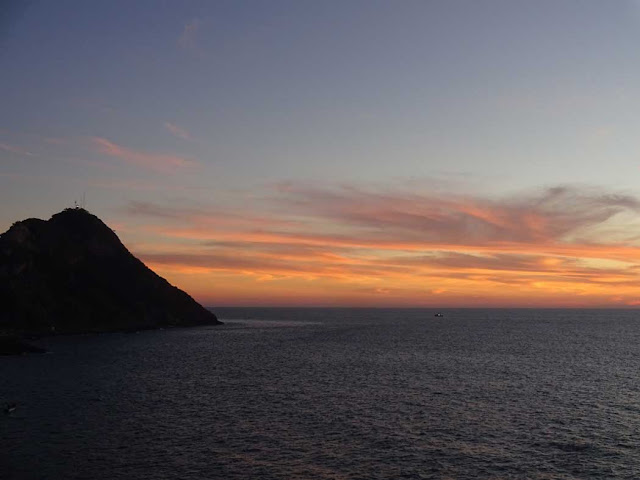 I had three cameras with me last night plus the phone and had problems with all but the phone. One ran out of batteries – didn’t have extra with me. One just refused to work after a couple of pictures and the other one kept telling me it couldn’t access the memory card! Finally changed the memory card to the only one still taking pictures and it worked. Today they are all recharged and correct memory cards in each one and they seem to be fine…
Then of course since we were in old town already why not go see what was going on in the Plazuela Machado. So we parked [lot where all the murals are – charged 30 Pesos for two hours – about a buck and a half -and walked over. All the Christmas decorations are up now. I think this year is the prettiest it has ever been. Lots and lots of lights. 15th Birthday pictures. 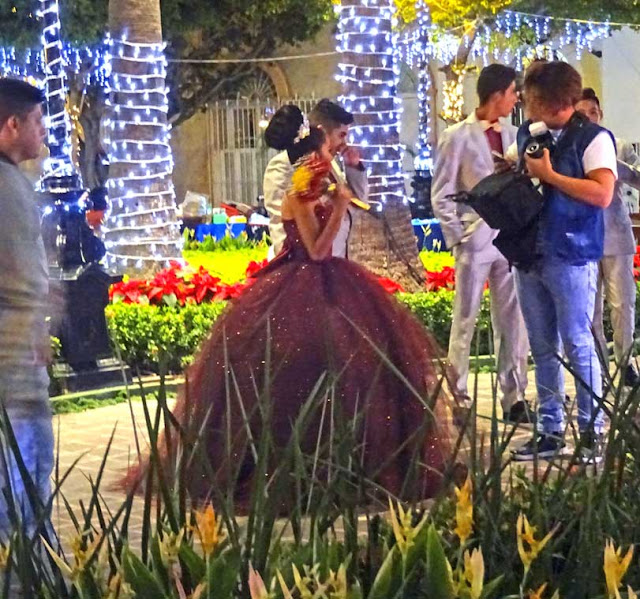 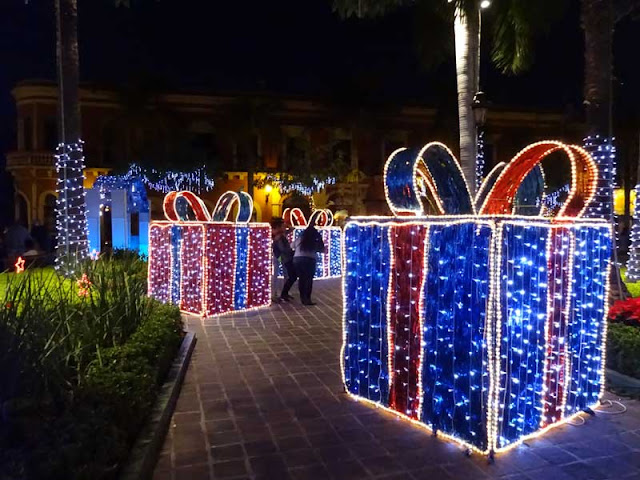 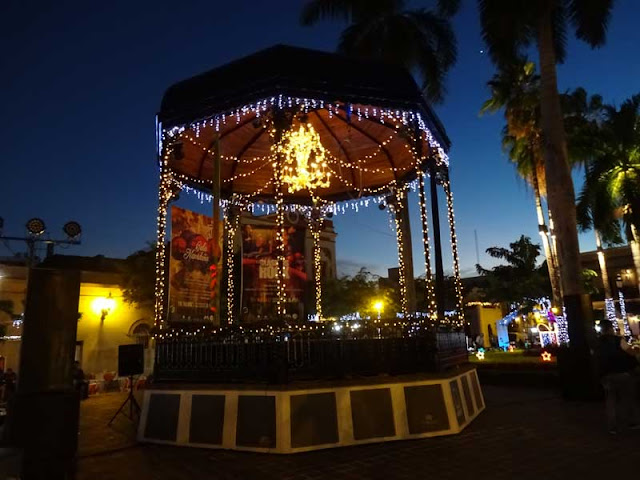 Looking up at the moon 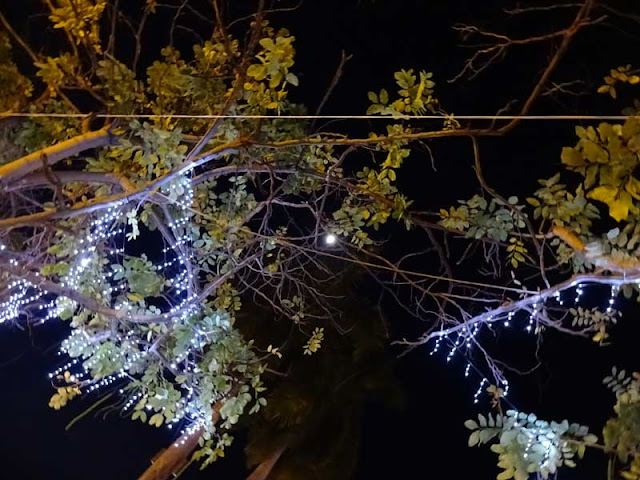 There is a new restaurant on the corner and more vendors than ever.
We ate dinner at Beach Burger. Bill had chicken fajitas and I had grilled fish. Both very good.


Lots of independent entertainment going on all over the plaza. Dancers, unicyclist, mimes, stilt walkers and music from every side. 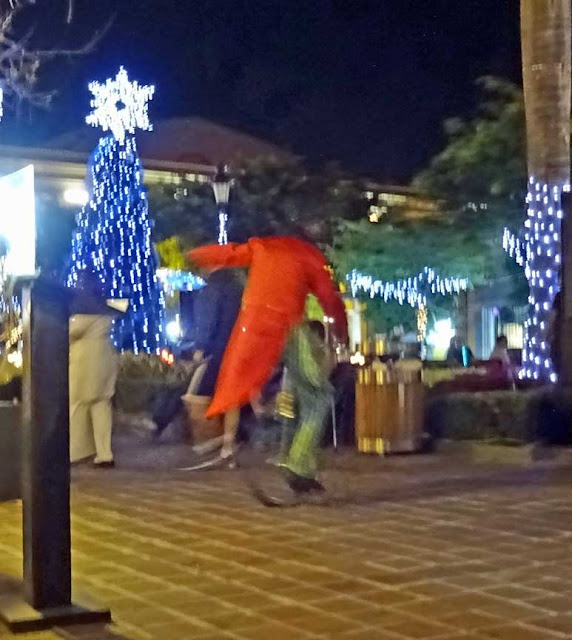 She set her hula hoop on fire and put on quite a show. 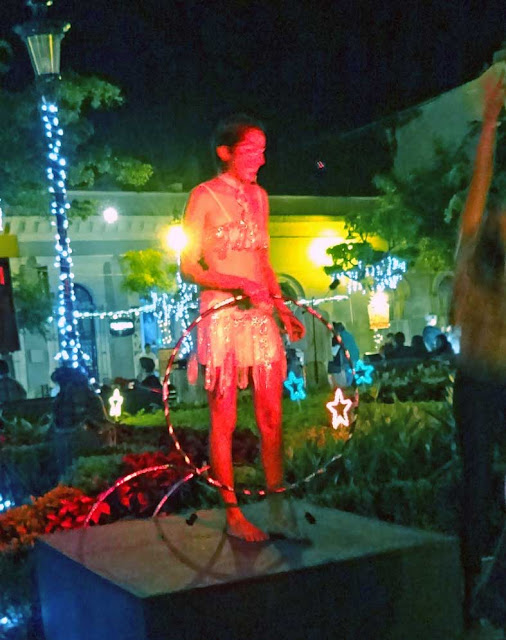 I've got a couple of videos but need to go to the office to post them. Will try to do that later.
Bill wants to go somewhere now - so bye till later.
Posted by Carol and Bill at 8:44 AM