Poor Planning on our Part

Been up for an hour already and it is only 5:21!!! Woke up first time a little after midnight. Then kept waking up every hour. Finally got too restless so got up at 4:23. Today is going to be a loooong day. Not even a speck of light outside yet. At least the Internet works really fast this time of day. The furnace has been running all night. Comes on runs a few minutes goes off for a few minutes then comes on again. Tonight if it is still cool we’re using just the little heater.
Yesterday we got a lot of things done – but all at once. Which was a bit of poor planning on our part. First the painter picked up the Jeep to take it to his shop to paint it. We should, maybe, hopefully get it back Wednesday.
Then the upholsterer came. We decided on a fabric. See photo. 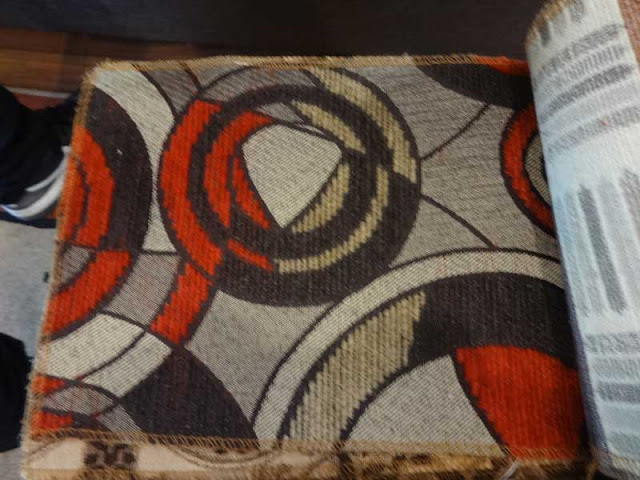 We are having the dinette seats redone. The foam in them is horrid, and the material worse - already showing wear. The dinette cushions. We’ll leave the fake leather on the top but put new good foam in it and change the material to the more durable and colorful material. 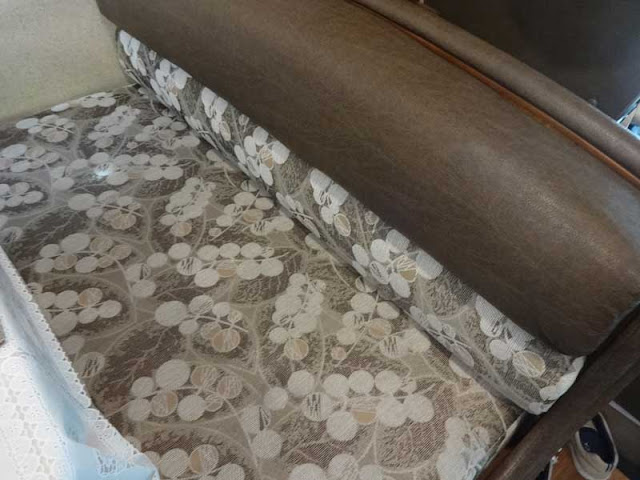 So he took both dinette seats and the seat cushion from the sofa. Which turned into a production. We, for some reason, thought there were two cushions on the seat of the couch. Nope. Took a while to get it out. 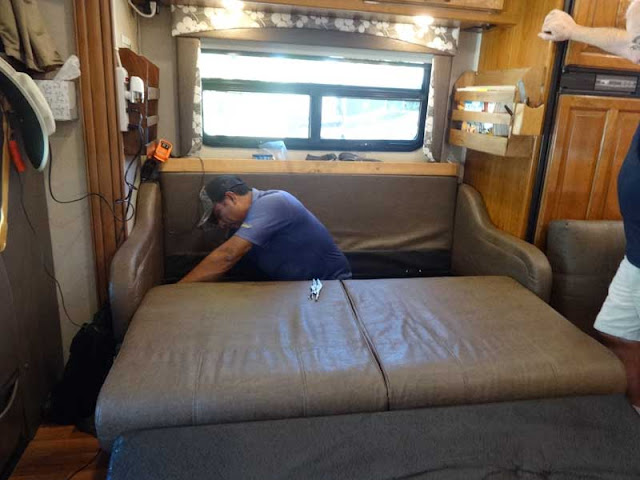 There is one long cushion with a seam in the middle and all of it was bolted to the bed frame. 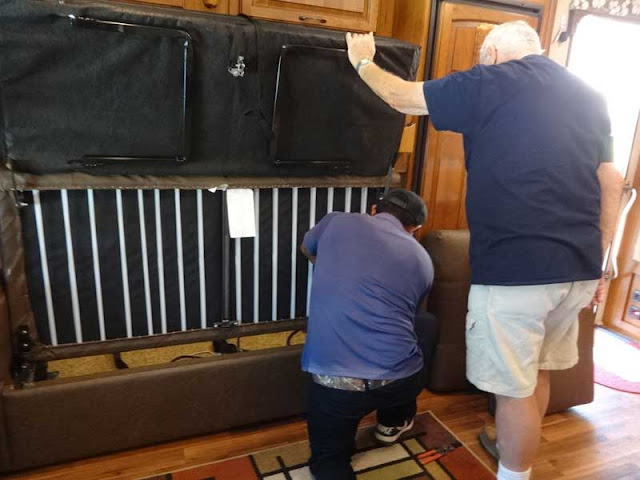 So the entire bottom part of the sofa is gone. Effectively leaving us with no place to sit. And no car to go someplace else in.
Everything in the upholsterer’s truck. 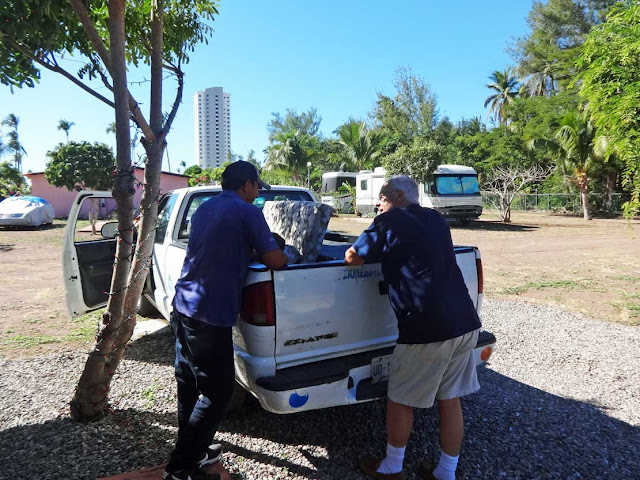 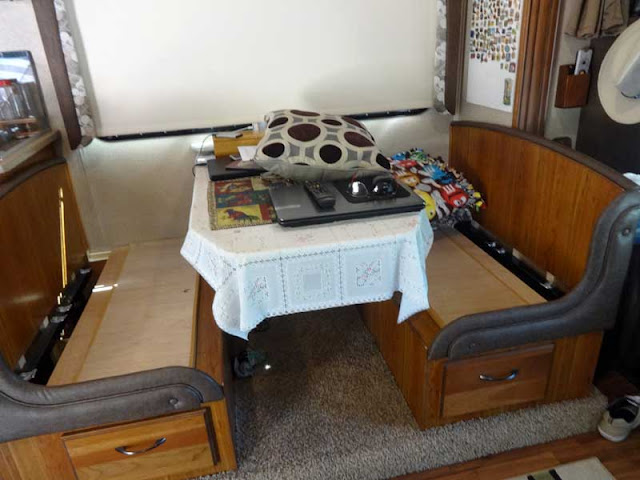 The sofa now. When we bought this originally we thought we’d take out the sofa and put in a recliner in that space. But we can’t do that unless we build a false floor as all the wiring comes up there. 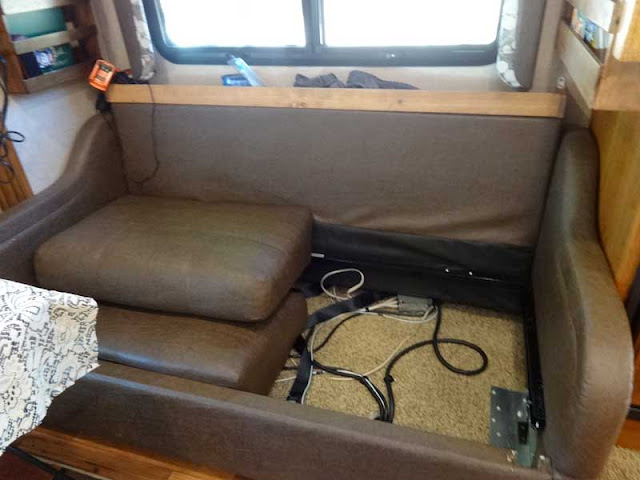 At least it was nice enough to sit outside in our lawn chairs. Though there was a chilly wind blowing. Then Bill appropriated the bed where he claimed he was reading. I went and visited neighbors.
Bill cooking steak for dinner. We’ve drug that BBQ back and forth with us for a couple of years. This is the first time it’s ever been used 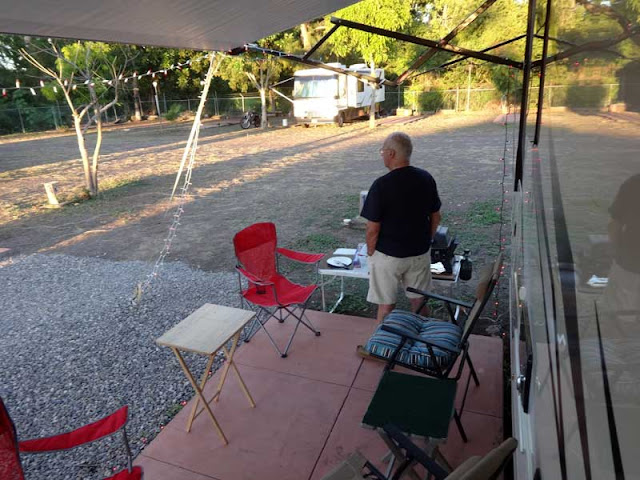 So how smart are we? Well this is the FIRST complete sit down dinner we’ve fixed this year. Sit down – get it? Good thing we have a lot of throw pillows. 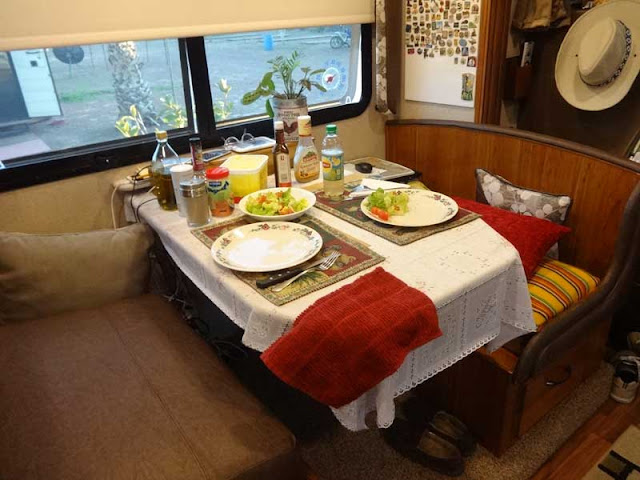 Using one of the back seat cushions on the dinette so I can use the laptop. Actually it is pretty comfortable. Bill is using the foot stool to sit on to use his computer.
I just finished the new Jack Reacher book by Lee Child, pretty good. Takes place when he was still in the army. Also been reading a bunch of free e-books. Some are good and some okay and some – they should pay me to read. But for free…can’t complain too much. Also found a couple of good series with the first book free.


Today we are thinking about taking a pulmonia into Centro walking around a little and having lunch in the plaza. A cruise ship is in and there is usually something going on around there. Maybe I'll get a few steps in, haven't been doing much walking lately. Now that it has cooled down I'm going to try to do more. Got to lose that extra weight I picked up over the summer. 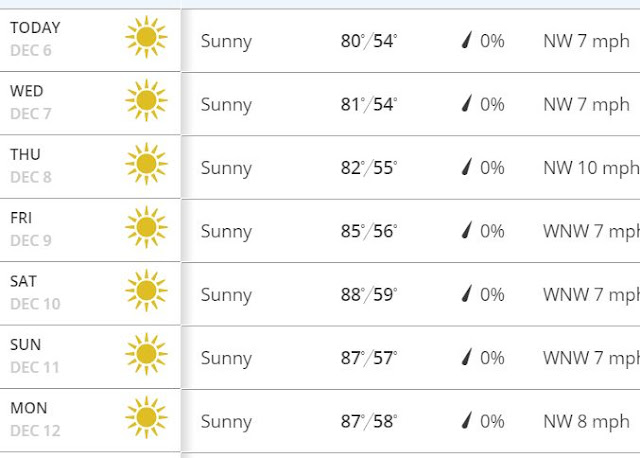 Pretty near perfect weather coming up. Except for Saturday on.
Posted by Carol and Bill at 4:50 AM

Hello. New follower. Wow. I really appreciate the time and effort you put in on this blog. Thank you. I love all your pictures. I read so many of your entries so that I kinda for to know you a bit. Thanks again for letting me follow your days. From Da Lat Viet nam.

Dinner setting is very nice with tablecloth and all; even with the cushions missing.

Improvements are never easy! How come the Improvement shows never broadcast "Real Life Experiences!" We are home, -19C, will get colder. Yuma starting to look better!

Thank you for following along with us on our adventures. I usually manage to take over 100 pictures a day. Sometimes it is hard to decide what ones to put on the blog.

The table cloth is always on the table. Bill's idea. I almost bought some Christmas oil cloth yesterday while in Centro. Maybe I still will. What the heck.

It is going to be hotter than heck in a couple of days. You send me some cool and I'll send you some heat!