Painting the Jeep - Oh my!

Friday morning, next to the last day this year. Seems like I’ve just learned to write 2016! Very overcast and wet this morning. Almost like rain without the drops.
This post will mostly be about Willie, the jeep, not us.
On Wednesday Bill developed a craving for pizza, so we gathered up our unsuspecting tourists and went to the Centro Historico to La Mona a pizza joint. 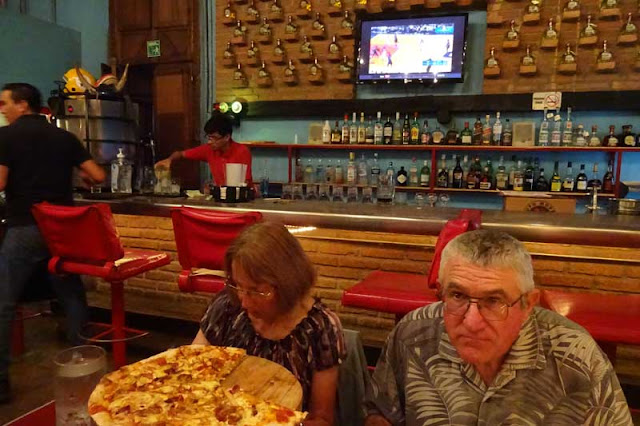 We have eaten there many times. I think I’ve posted pictures of their wood oven that is in the parking lot where we park evenings to go to the plaza. Always been good. Lorie and Mike ordered, I ordered lasagna and Bill ordered a calzone – what happened to the pizza he’d been talking about all day? Their pizza came, my lasagna came…no sign of the calzone. Finally Bill caught the waiter and asked. They brought it right out to him. EXCEPT the outer crust was burned and the inside was not cooked!!! And by then a table of gringos had been seated. They sounded like they’d had a few too many. Soon it was all “I love you brother” and “And I love you to bro.” at the top of their voices. It went downhill from there. The waiter turned the music up loud enough to drown out their conversation. Good Grief! Bill paid the check, they deducted his uneaten meal, and he went outside. We met him in the plaza after we’d finished 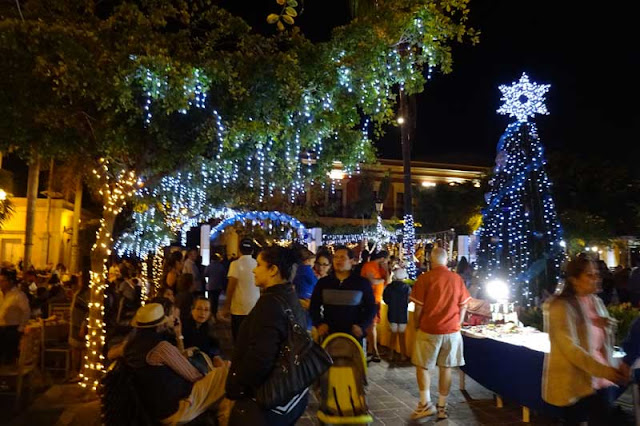 Before we went home he ordered a pizza to go from the Italian restaurant in the plaza. 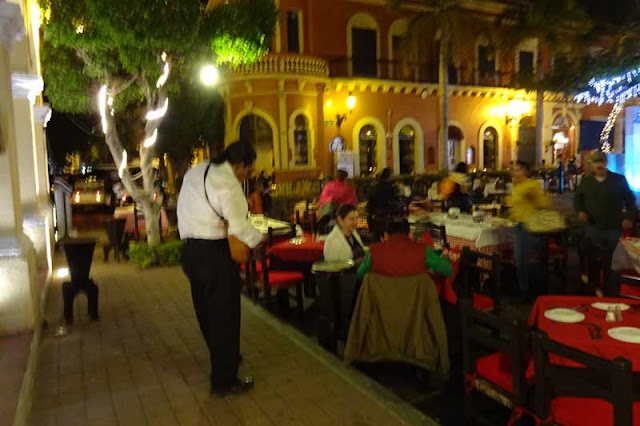 Ate it all when we got home.
Thursday we spent at home. The artist has come to paint Willie. It will be a couple of day project. Willie being checked out by Gilberto the artist. The bra is off. 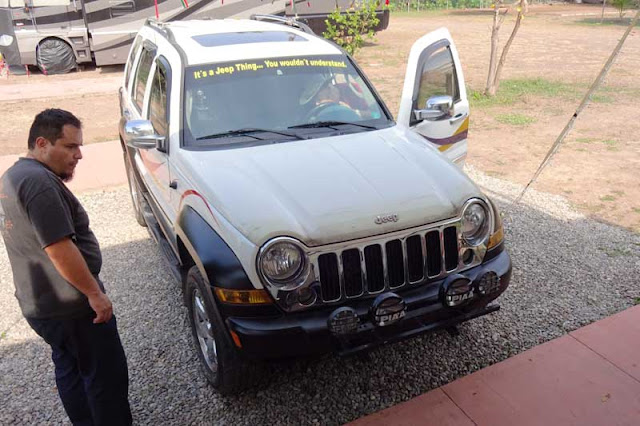 Taping what won’t get painted. 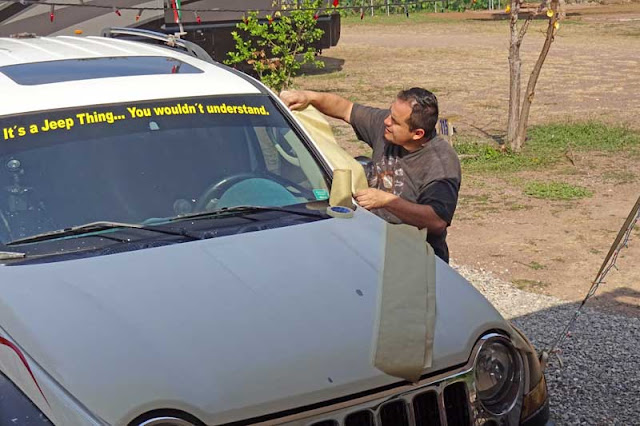 Gilbert’s tools. He brought everything in his back pack. 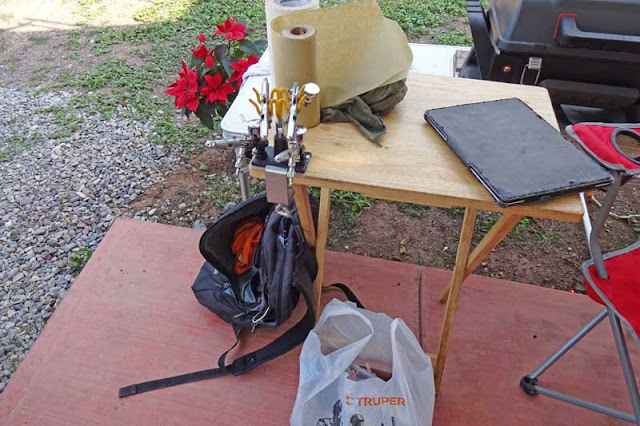 Except he is using our compressor.
Quick sketching the design. Willie’s hood is in the shade next to our patio. 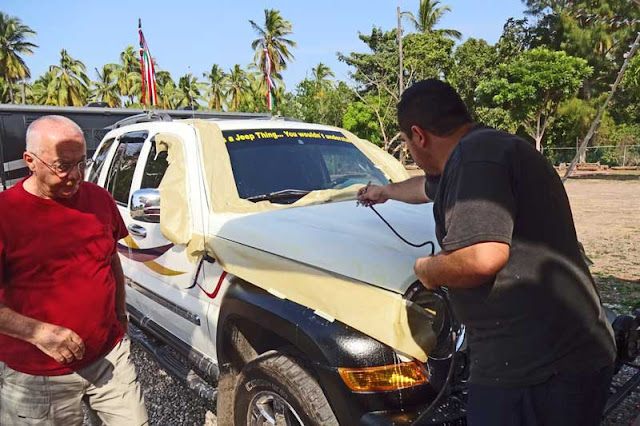 The beginning of the flames. All freehand. 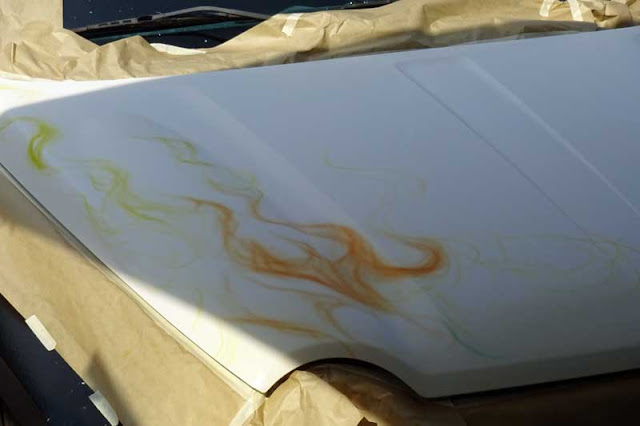 Working on the other side. 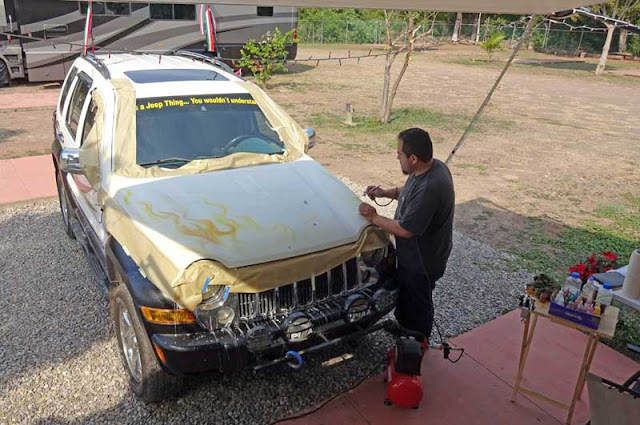 Sanded down with beginning of flames and outline of bird.

And how about that. Something is lurking under the flames. 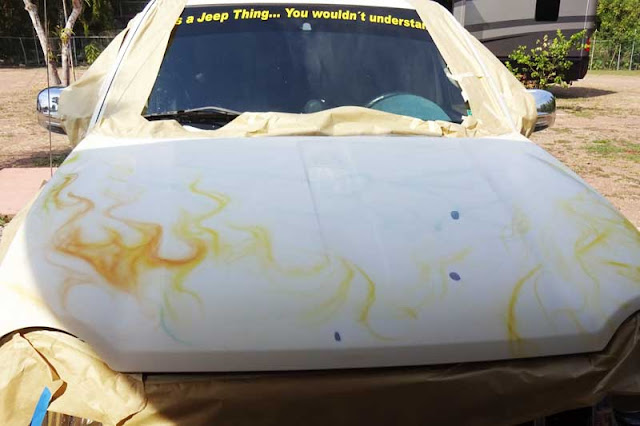 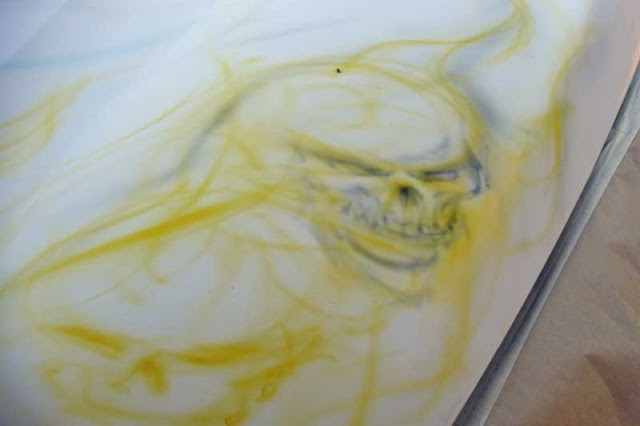 Checking out the design again on his tablet. 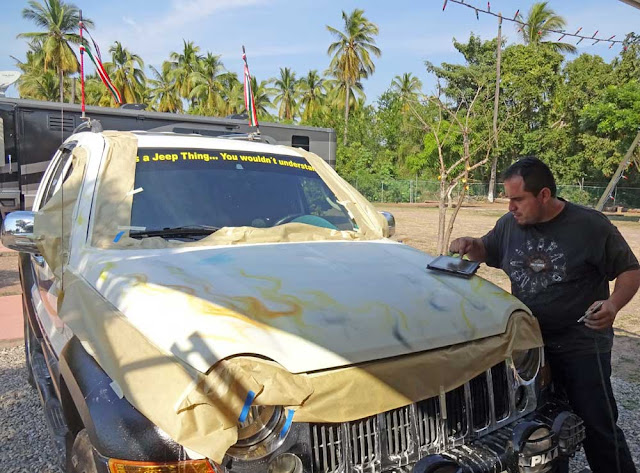 Cleaning his air brush. The vaguest beginning of the flag. 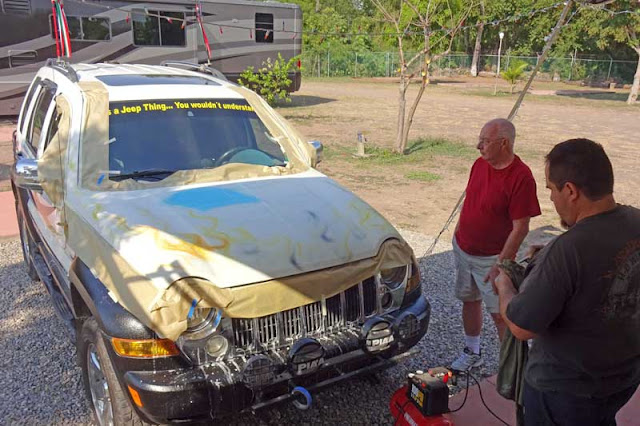 Starting to work on the stripes for the flag. 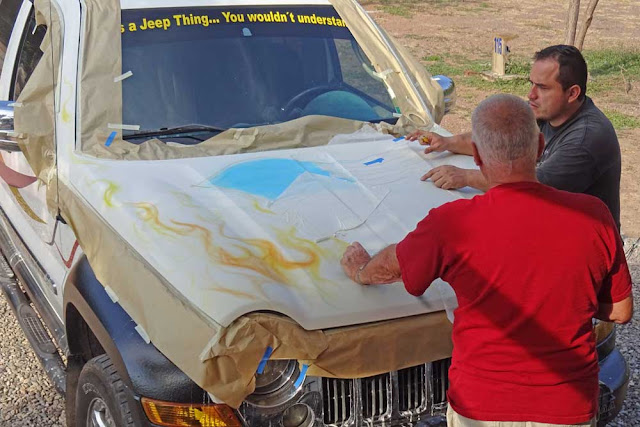 Tedious work. He is so exacting and careful. 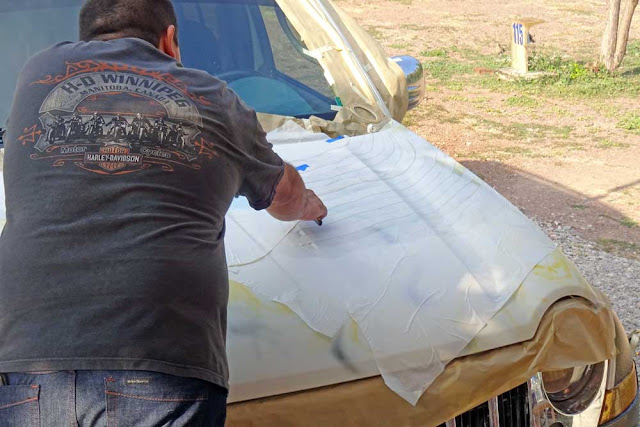 Making the pattern for the stars. 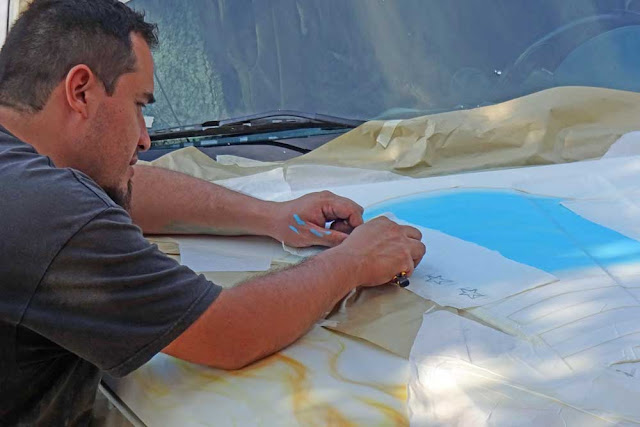 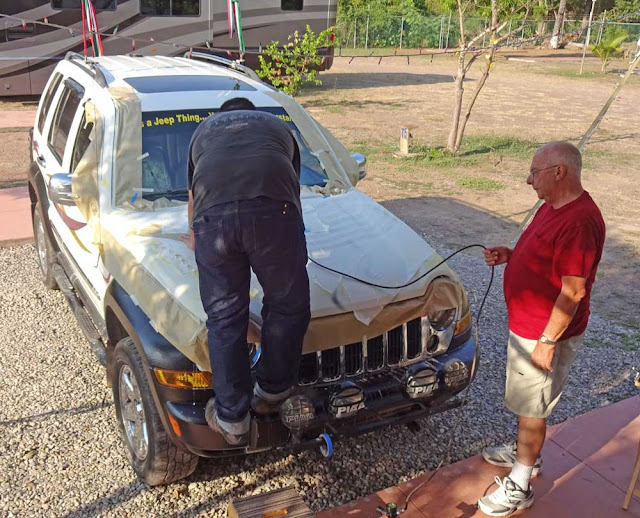 Almost done with the stars. 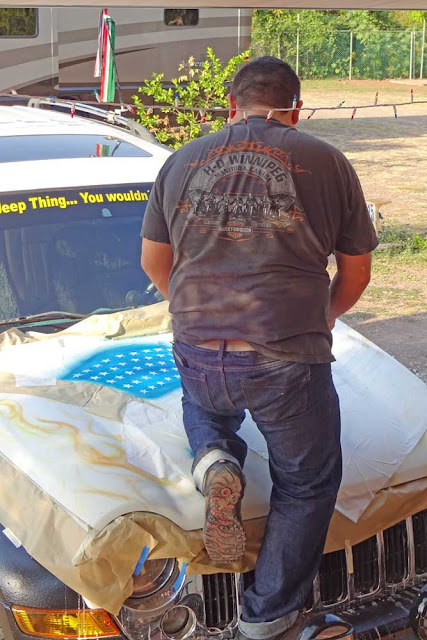 Putting some shading in on the flag. 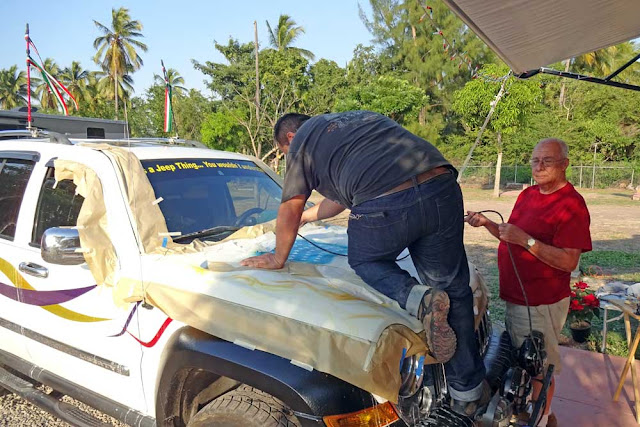 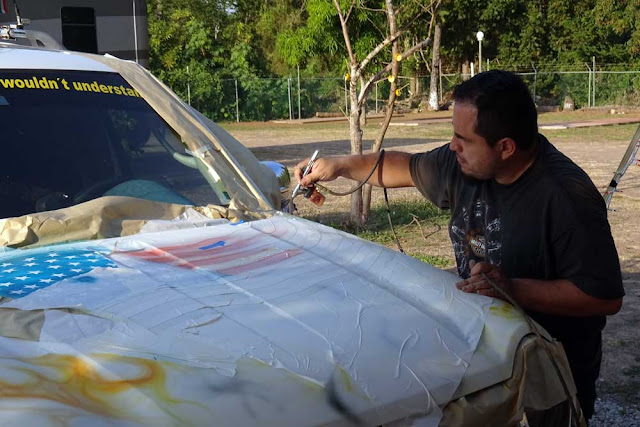 He is gaining an audience as he works. Amazing to watch. 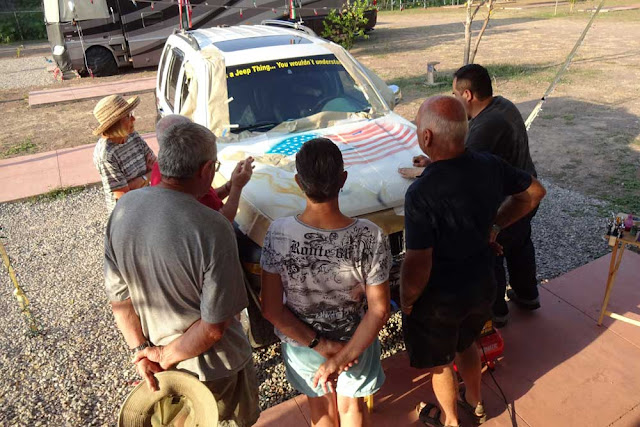 Peeling the tape off. Very carefully. 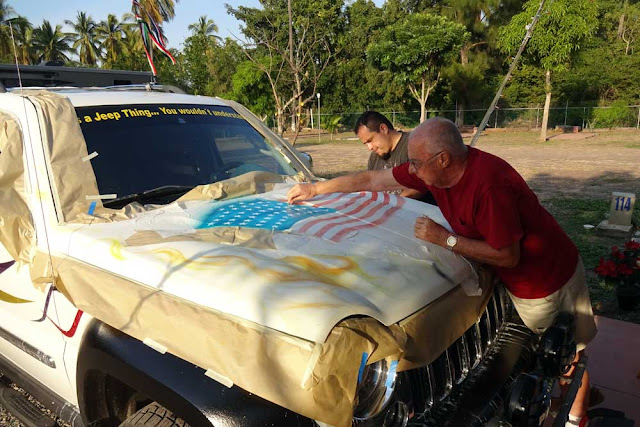 Starting to look like a real flag with the folds in it. 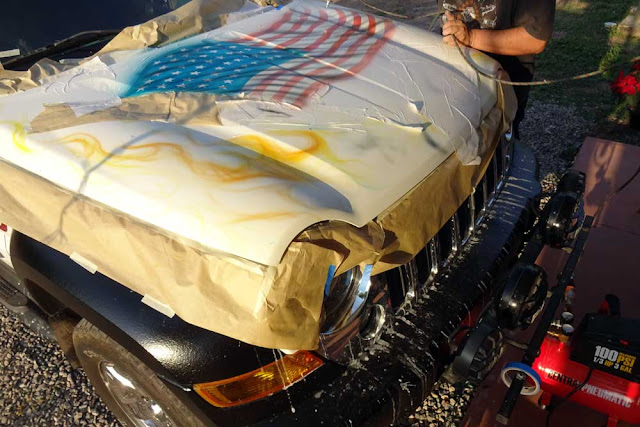 Adding a 3-dimensional look to it. It is just fascinating to watch him work. He is so quick. 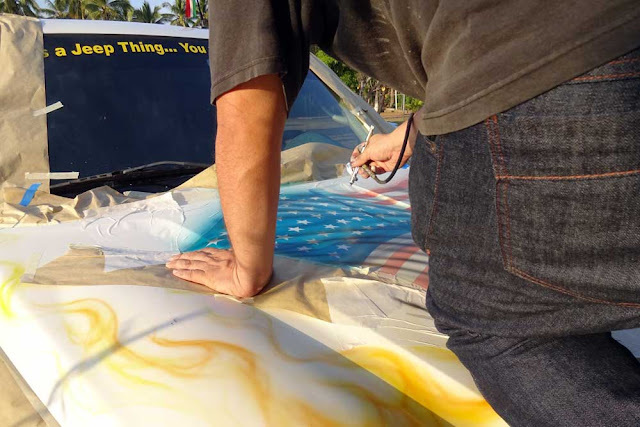 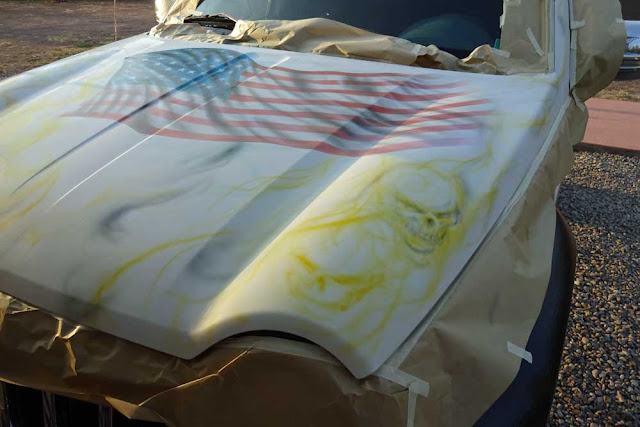 Bill covering the car for the night. Day 1 is over. 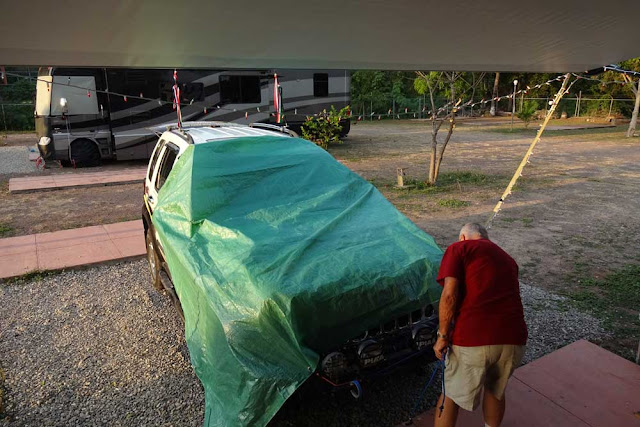 Gilberto arrived here this morning at 7:30 says he wants to finish it today so he can have fun over the weekend. More pictures tomorrow.
Posted by Carol and Bill at 12:40 PM

Hey, what happened to Guillermo, the airbrush artist, who wanted to paint my van/trailer??

He was watching and learning!