The waffle machine is broken!

It is really cloudy this morning, wish I’d been up to see the sunrise. Had a lousy night. Went to sleep at 10 and woke up wide awake at 12:45!!! Slept off and on until I finally got up. Hate that, I know better than to go to bed early.  But anyways…
Here is our site with the gravel. So much nicer, no more tracking dirt and weeds inside. A few more sites had gravel delivered – the manager is just jumping for joy. The park is being improved and it isn’t costing him anything. 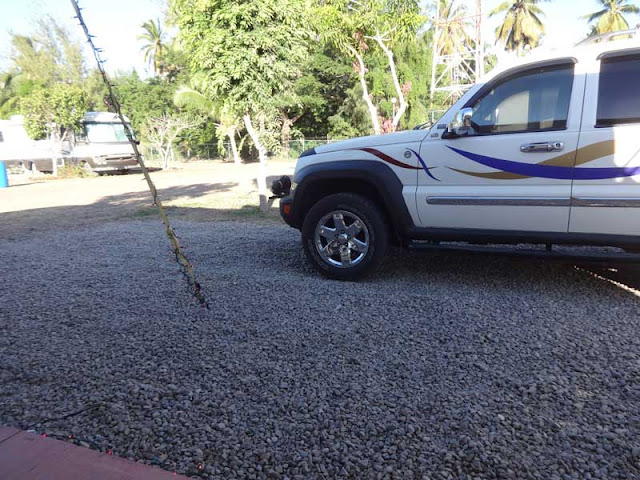 So one of my jobs yesterday morning was to vacuum the whole inside.
I loaded the bread fruit tree and sat outside enjoying the birds, coffee and beautiful scenery. 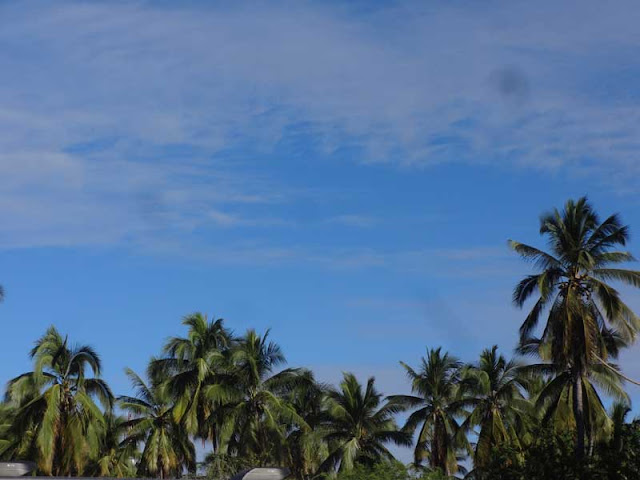 Then we went to breakfast at Torres and OH MY GOSH their waffle machine was broken – again, it broke last year too. They have the best waffles I’ve ever tasted. So had to have bacon and eggs and potatoes and toast instead. Bill had an omelet – US$16. Including coffee.
Leaving there we went to downtown, The Golden Zone, so called cause that is where the big tourist hotels and all the trinket shops are located. A new thing here in Mazatlan is covering the chain link fences with fake foliage. Sure looks nice than seeing all the construction mess going on behind them. 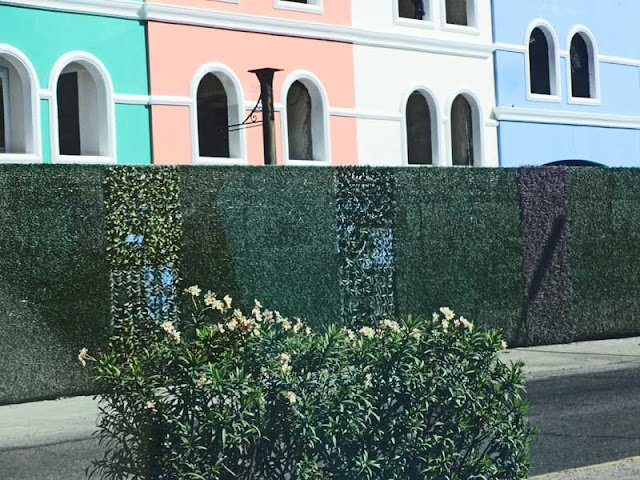 The only parking place we could find was in front of the Sea Shell Museum. So figured we had to at least go inside for a look around. We’ve been in there every year but always fun to see what might be new. I really like these hanging made entirely of tiny shells. All different designs. 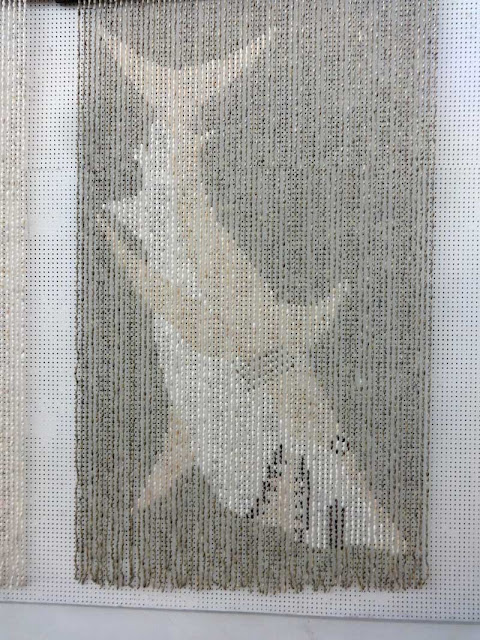 And of course the fountain on the second floor made of all kinds of shells. 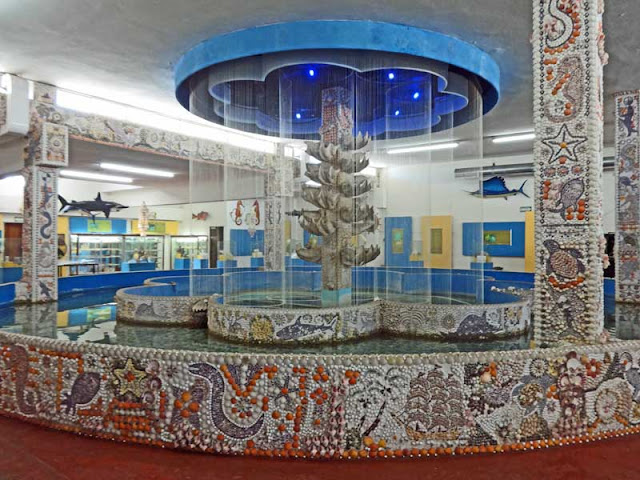 Then we went next door to one of the arcades with many tourist type shops in it. Stopped at the jewelers we found last year so Bill could talk to the guys workings there. Last year he gave them some hints on how to make their work easier. 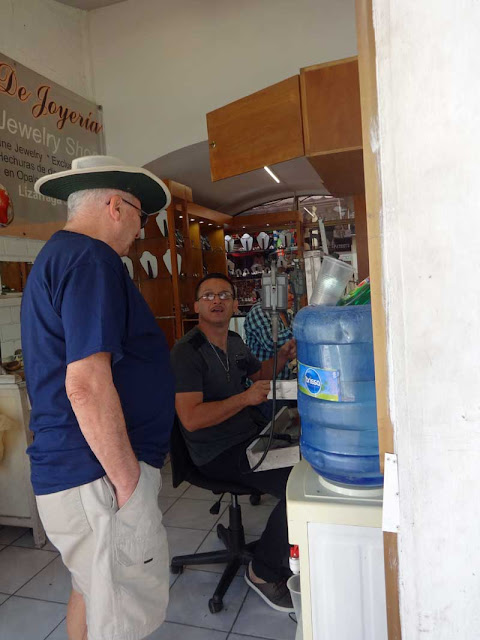 They were glad to see him and assure him they were doing what he had told them. [If you didn’t know Bill was a jeweler for his whole life – making one of a kind pieces. We also had a store in Beverly Hills, CA for a few years.] 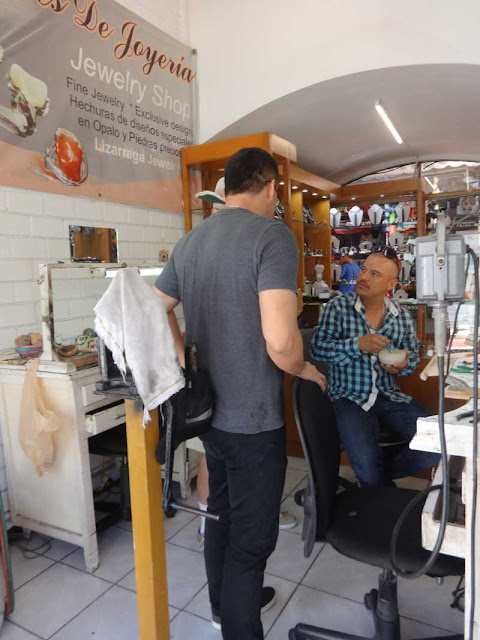 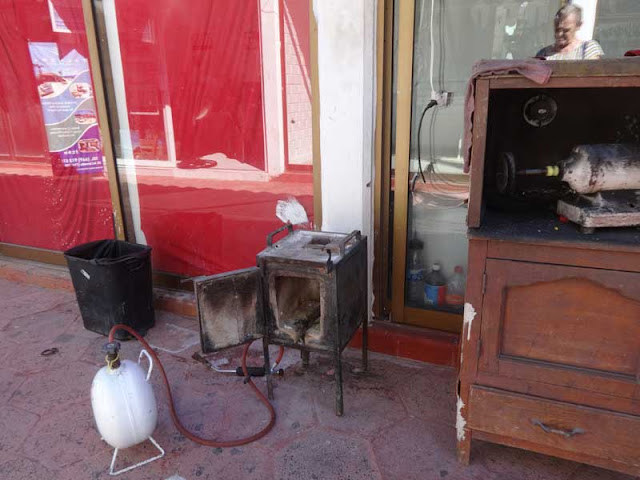 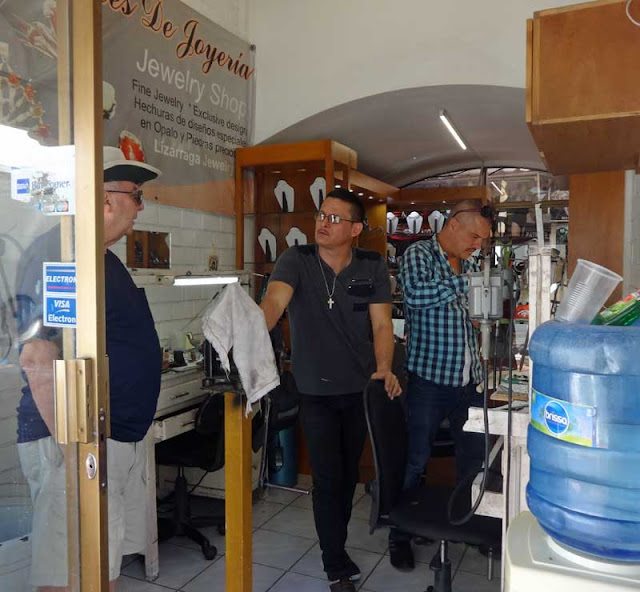 Then we walked up to the store where we bought all the tile for the window boxes Bill over the summer. We had promised to show the lady that took the time to gather them all up and pack them how the boxes turned out. She was surprised we’d remembered to bring her pictures. And happy to find out only one tile broke in transit.
Walking over to the beach we passed Lucky B’s restaurant. Never been in it but the owner has some fantastic vehicles. Great paint job on his motorcycle. 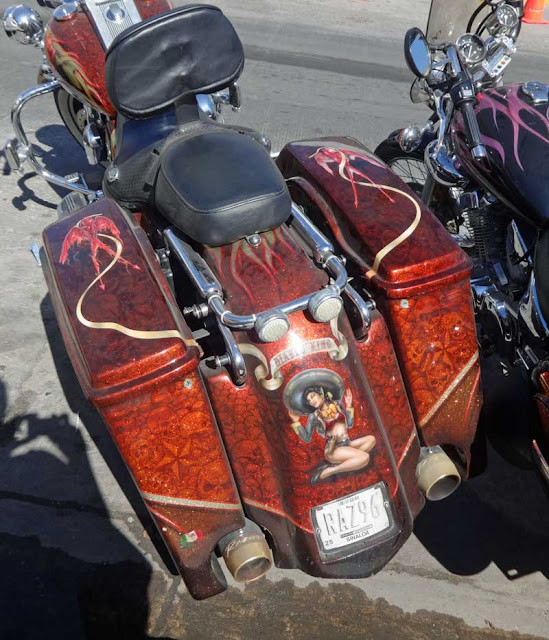 Then down the passage way to Pancho’s on the beach. I like all the water features and tile benches. Wasn’t crowded as there were no ships in. 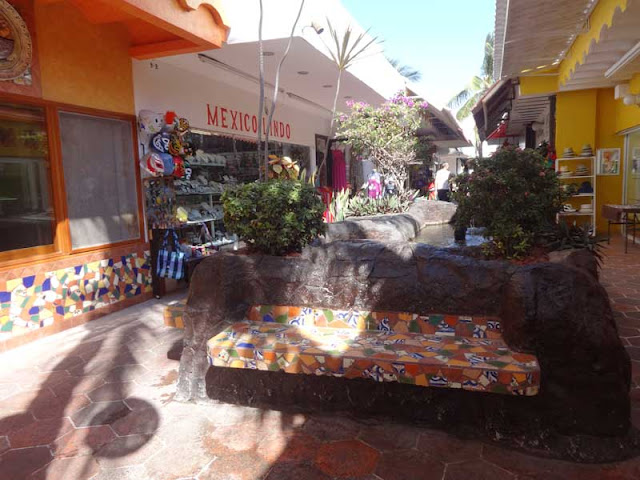 Then to the big Mall down town so we could get some of the sayings on the back window of the Jeep remade as they were getting brittle and cracking. Bill waiting for the girl to make them. 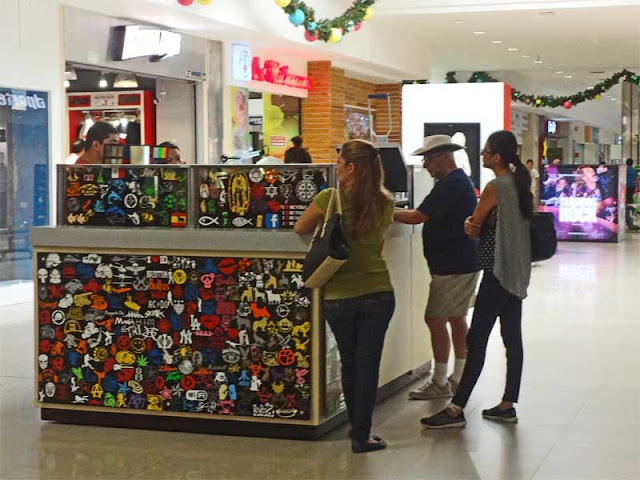 The roll me over sign and Willie are the new ones. While he waited I wandered around the mall. Getting ready for Christmas. Santa’s house. 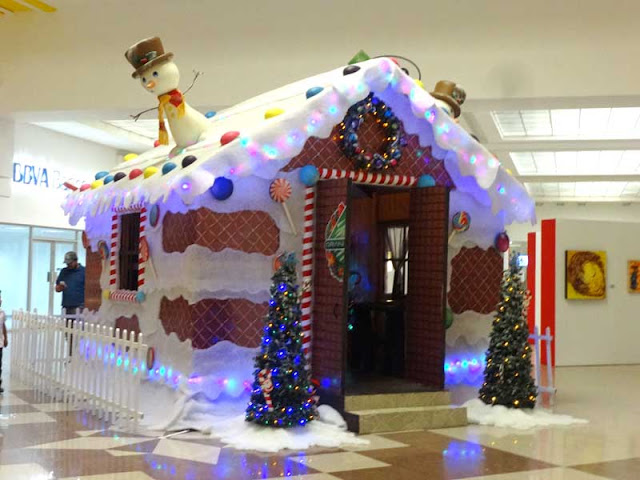 And how about this dress. It just might be a little scratchy. 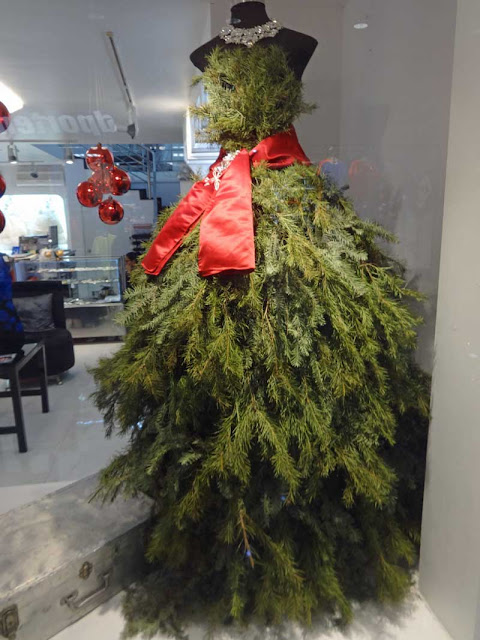 And I HAVE to have these shoes. The colored dots are reflections. 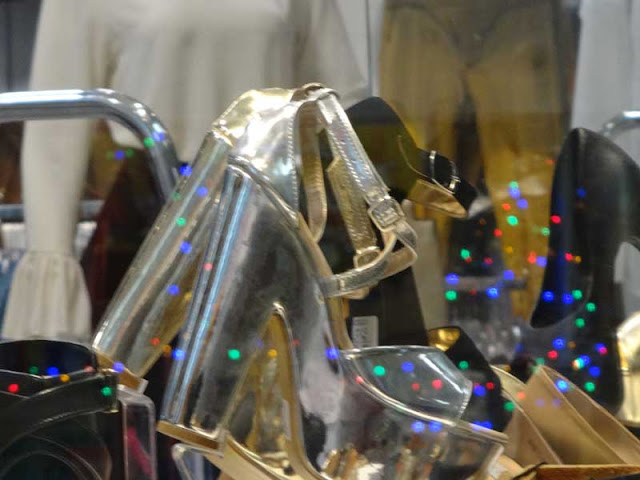 From there to Soriana supermarket where Bill asked his favorite baker to make him a couple of special little cakes. 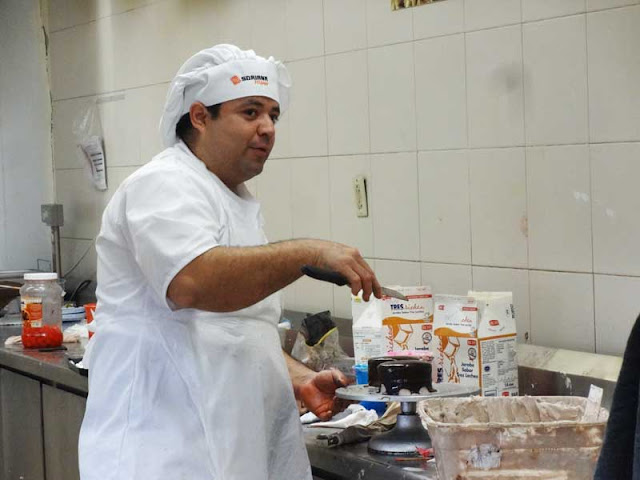 One white, one chocolate layer. About three inches across and frosted with dark chocolate. We gave one to the night watchman and Bill, who claims he doesn’t like sweets ate the other one. 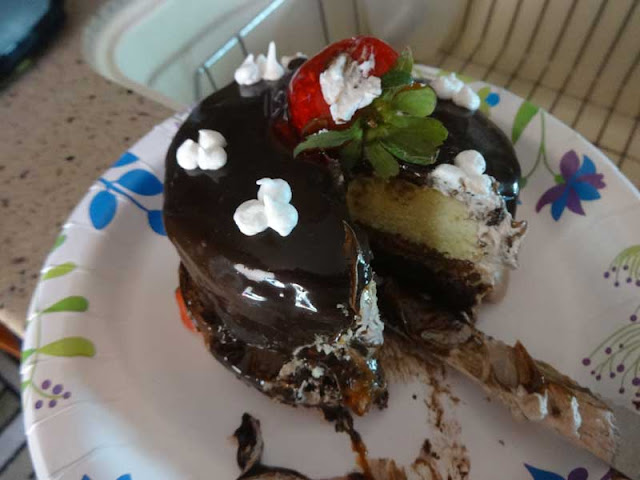 Eating breakfast that Bill just cooked. Watching birds in the tree. So far no plans for today.
Posted by Carol and Bill at 7:38 AM

You always find such interesting things to take pictures of and I enjoy seeing them all. Are you getting any company in the back? And yes, Carol, you "need" those shoes!

We are enjoying Rincon
.

We have lots of company back here this year. 1 5th wheel and 5 big motorhomes. We are all spread out. Hope a caravan doesn't come in!
I'd probably break my leg if I tried to walk in them.