Dancing the night away.

Sooo...today is Thursday and I'm up to writing about Sunday. Where has the week gone?
I got a request for a picture of Willie's back window with all the new decals on it. Everything is new except the palm tree decal. 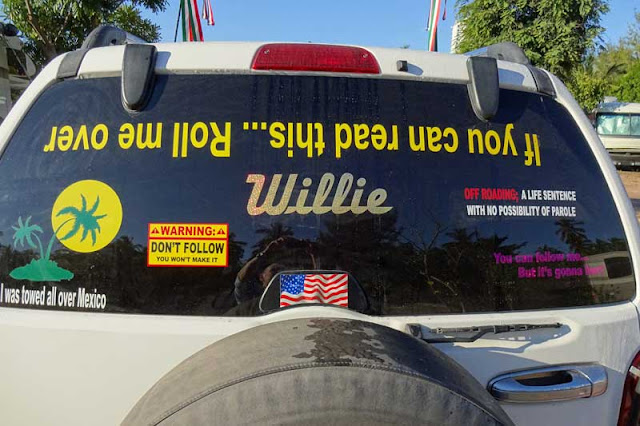 It is still quite warm and muggy here. But the nights aren't quite as cold as they were for a few nights. Haven't had to run the little heater, but still cool enough to sleep. During the day it is in the low 80s. But because of humidity feels warmer. We went inland yesterday and it was 93 there! Just 25 miles away. My poinsettia plant first thing in the morning with the dew on the leaves. 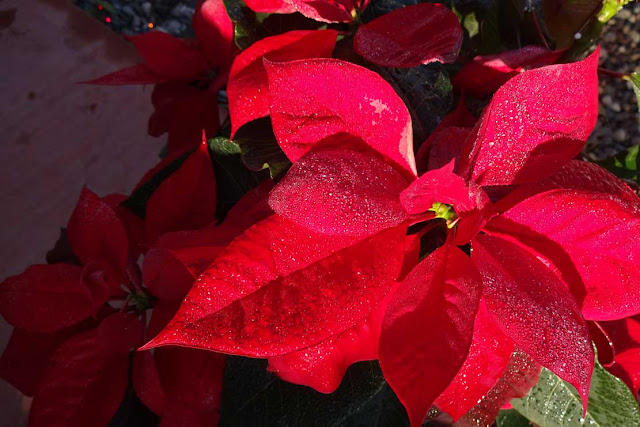 We've been visited by a couple of different birds this week. But they don't eat they just sit in the tree looking around. We've seen this one before he is hard to miss with his bright red coloring. 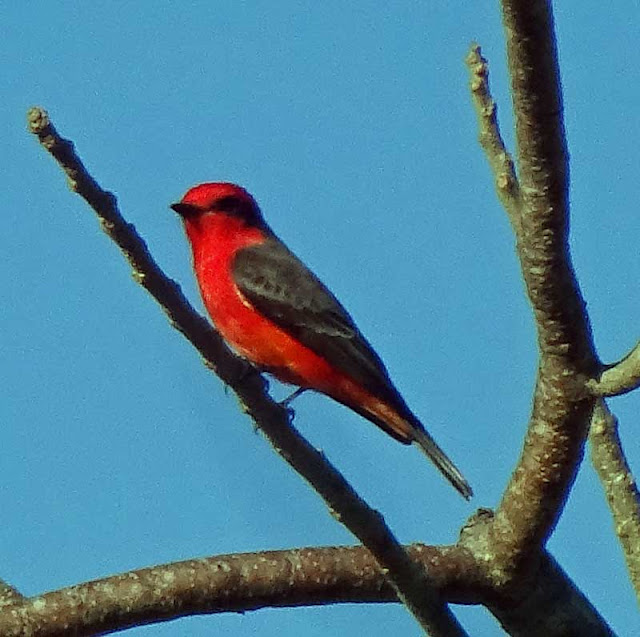 Never seen him before. There were two of them. Sure pretty. No idea what they are. 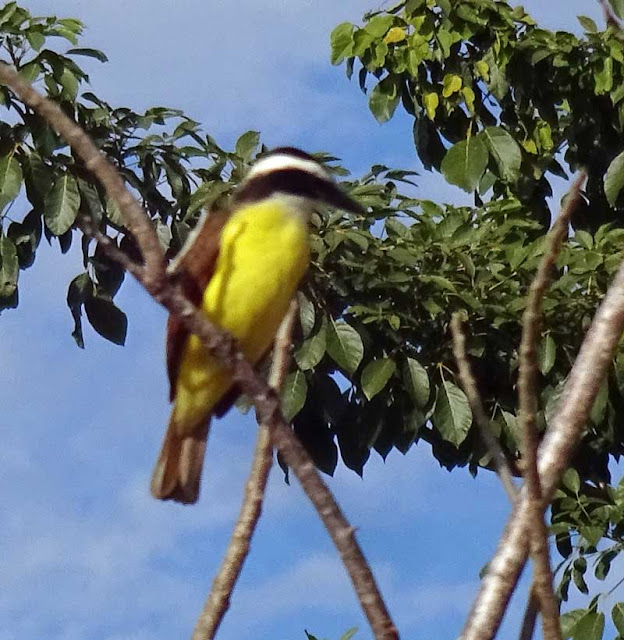 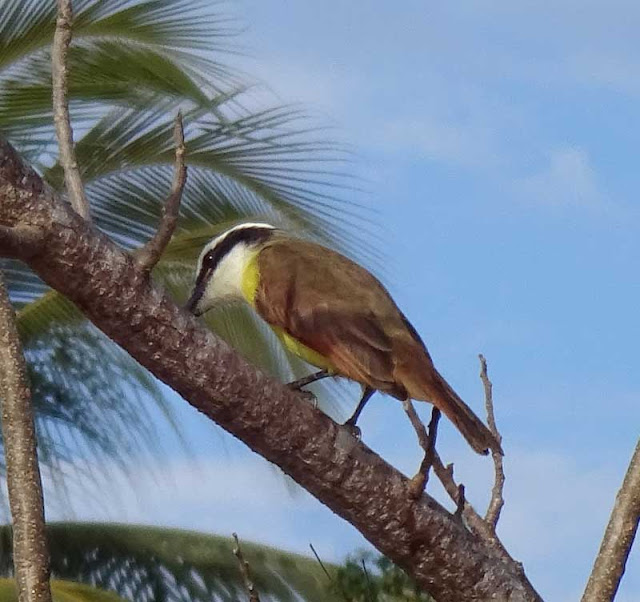 The big birds who usually hang out on the microwave/cell tower were sitting in a palm with their wings spread. They are BIG birds. Never come near our bread/fruit tree though. Meat eaters I guess. 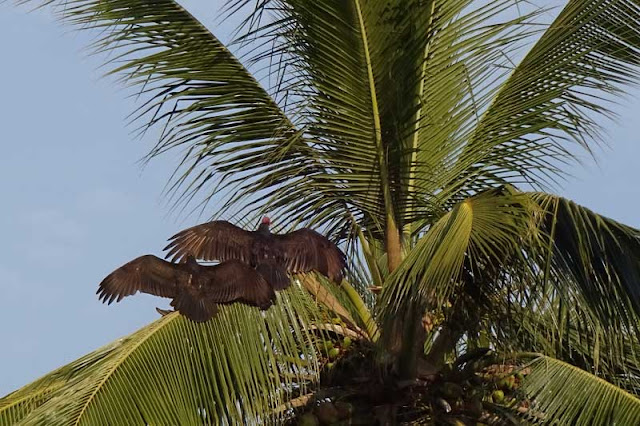 And again on Sunday night we went to the Plazuela Machado to listen to music and have dinner. Passed these girls dancing away in front of Senior Frogs store in the Golden Zone. Behind them is water running down the window wall. It is between two panes of glass a really neat effect. 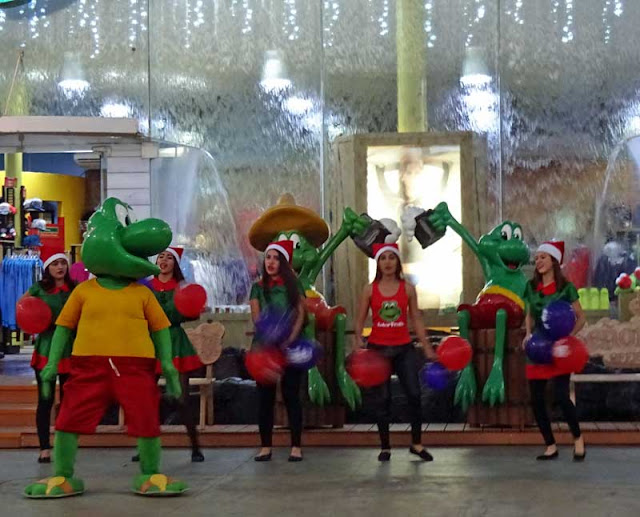 And yet another bride having photos taken in the plaza. Beautiful dress. 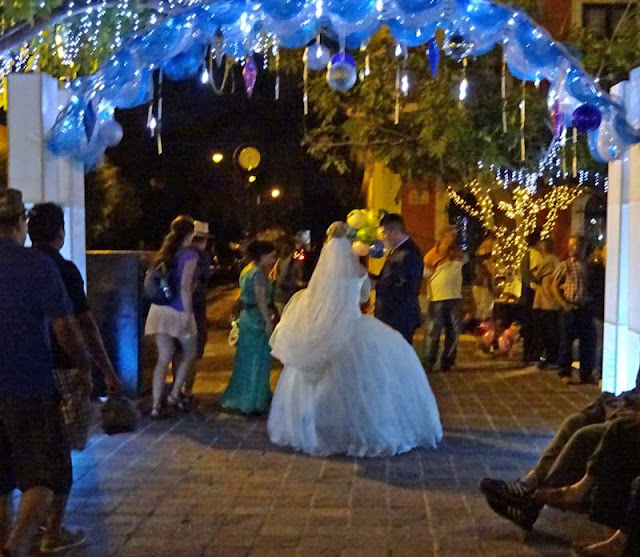 The picture looks funny because it is full of bubbles from the little guy's bubble machine. 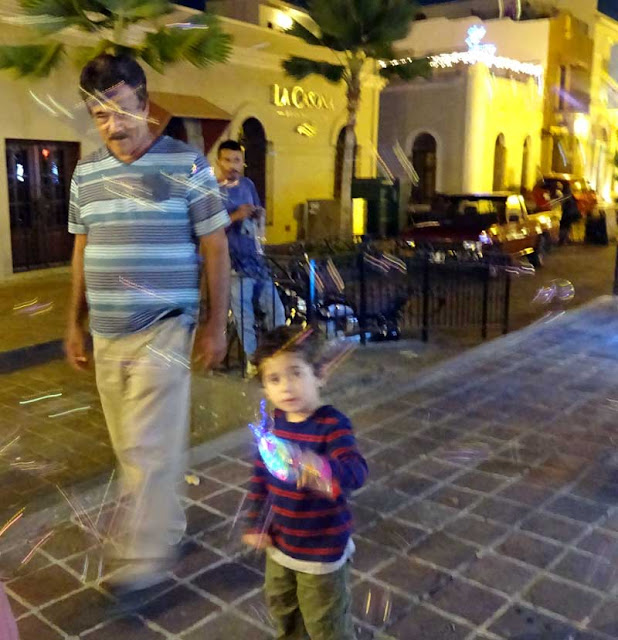 I guess Santa and Mrs. Clause will be around till they have to get back to the North Pole. 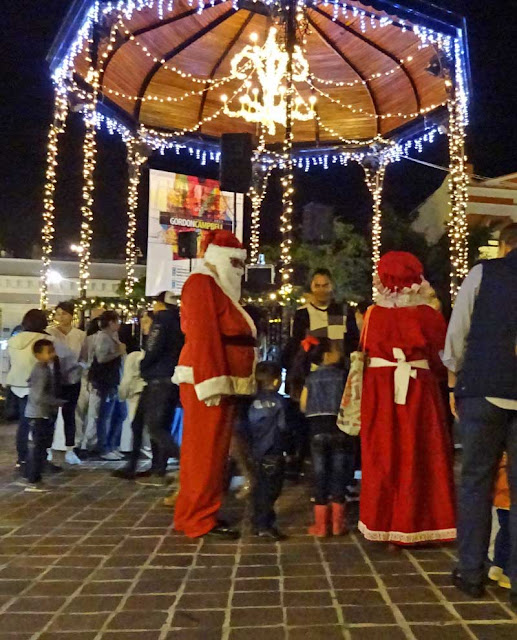 Contessa and Colin dancing. They were dancing too fast to get a good picture.  They are staying in their RV on Stone Island. She writes a blog 5C's Que Pasa. We met through our blogs. 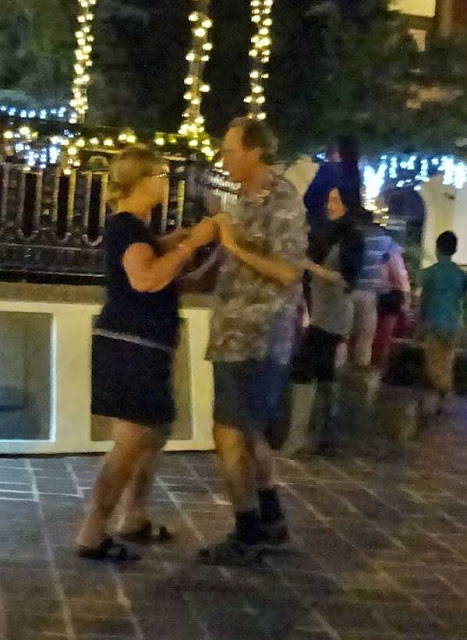 Our neighbors here at the RV park dancing too. 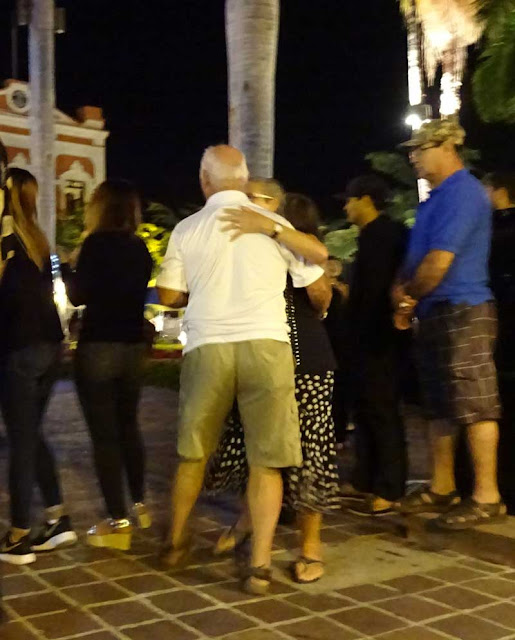 Well! look who else was dancing! 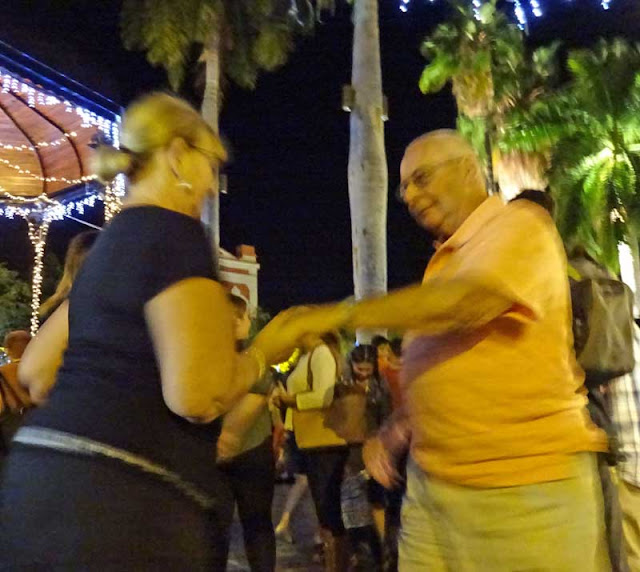 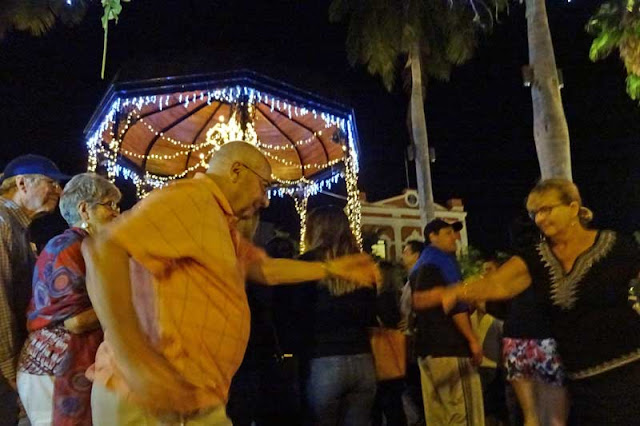 Everyone enjoyed the evening. Weather just right, music great and people watching fantastic.
Just as we were leaving Raphael played Achy Breaky Heart. Lots of people got up to line dance. 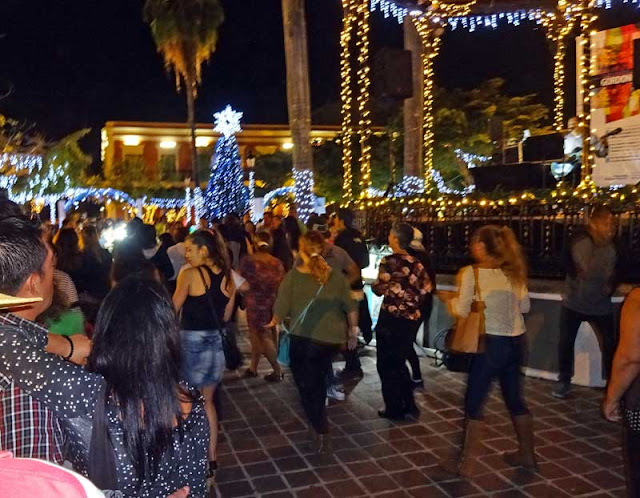 Monday late afternoon, while Bill was waiting for Gilberto the painter to come I walked across the street thinking there would be a pretty sunset. Not as nice as I thought it would be.  But a different looking sky. 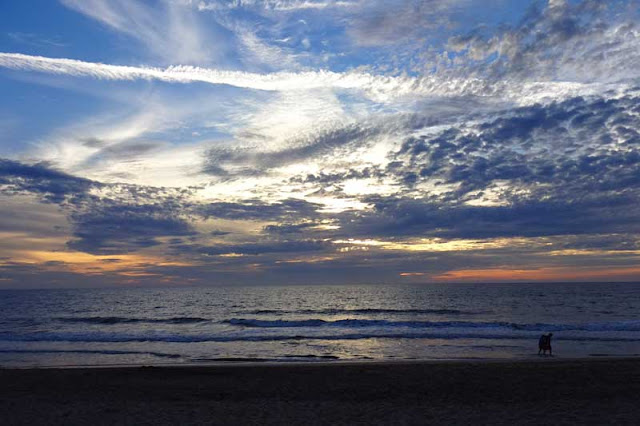 A couple celebrating with photos the upcoming birth of their baby. These are kind of stealth pictures, but with their okay. 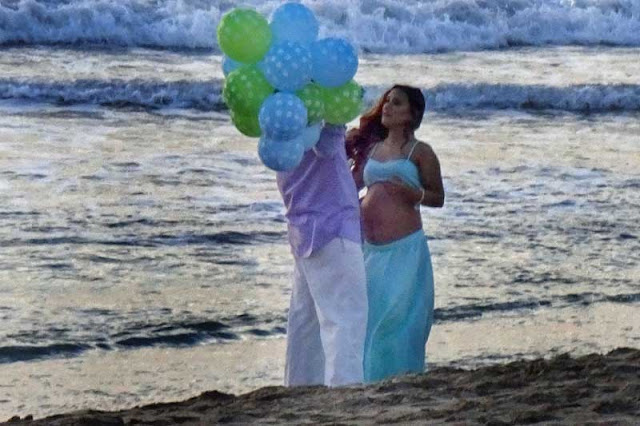 The balloons flew away and a young boy down the beach caught them and brought them back. 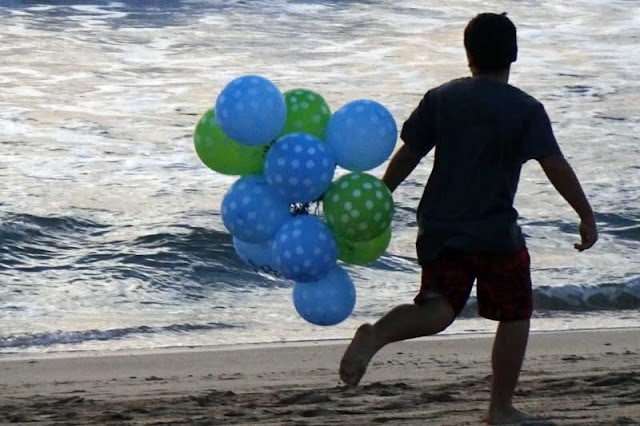 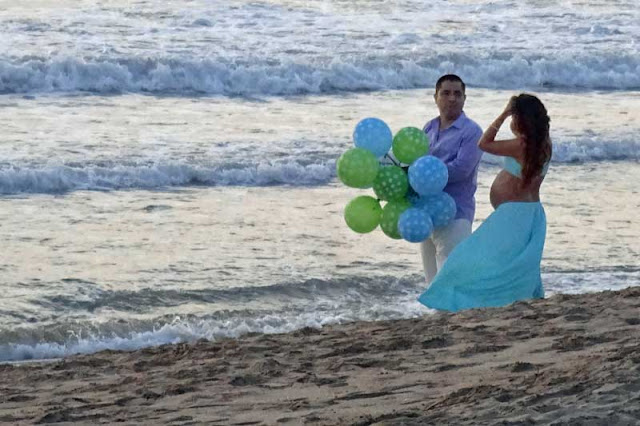 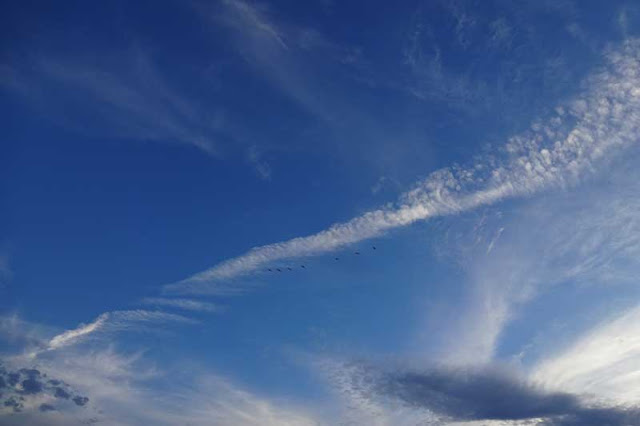 And that was about it for the sunset. Too many clouds on the horizon. 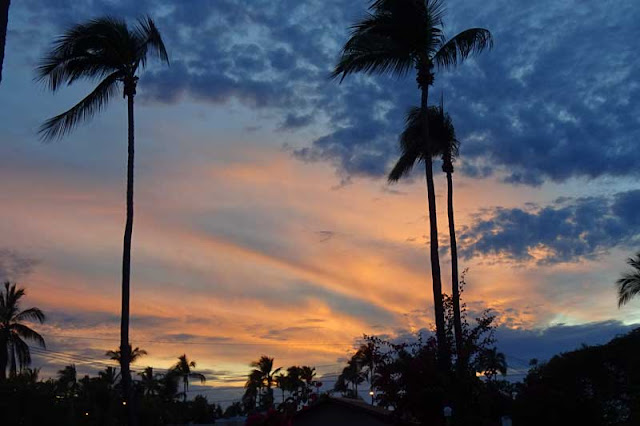 Got home and the painter didn't show up. He did get in touch with Bill and reset the meeting for this morning at 9:00.
On Tuesday I took a 3 mile walk that was only 2 3/4 miles. Cheated at the end of it. More about it later.

Wow!!! You must get a lot of comments about Willie. It seems like you always find fun things to do in Mazatlan.

A lot of people recognize the Jeep but don't really know us. So we get a lot of waves. However last week a friend we'd lost contact with saw Willie while he was driving down the street and pulled over to talk to us. That has happened more than once.