One of THOSE days.

What a surprise. It got COLD last night. Had another big rain storm and lots of wind. Bill was up in the middle of the night making sure the tie downs on the awning were holding. So cold this morning I put on long pants and shirt of fleece. Bill is up now and he turned the furnace on. Warming up fast now that the sun is up.
Yesterday was “one of those days” from beginning to end. Only part power in Arvi when we got up. Checked the breakers they were fine – finally remember about the button on the outlet in the bathroom. Pushed it and all was fine. Sorry Arvi I really didn’t mean all those things I said about you.
One of the biggest soccer games of the year was on yesterday morning and one of the Mazatlan TV channels was carrying it. Yes! Turned on the TV – nothing but static, weather interference. Could not see or hear a thing.
We had an errand to do in Centro so headed out. First thing we saw were north bound cars driving on our side of the divided street. What the heck? Soon discovered the north bound side was under water curb to curb. So can’t blame them.
Passed these guys working on building new curbing along one part of the road. Notice the up to date equipment they are using… 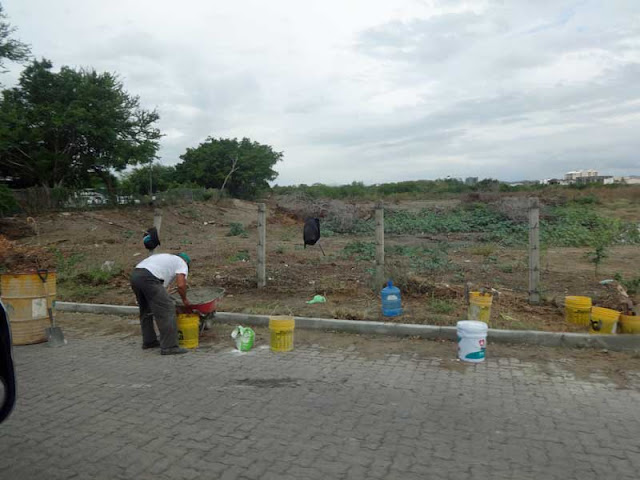 Into downtown, still lots of water on the streets. And not everyone slowed down going through the big puddles. 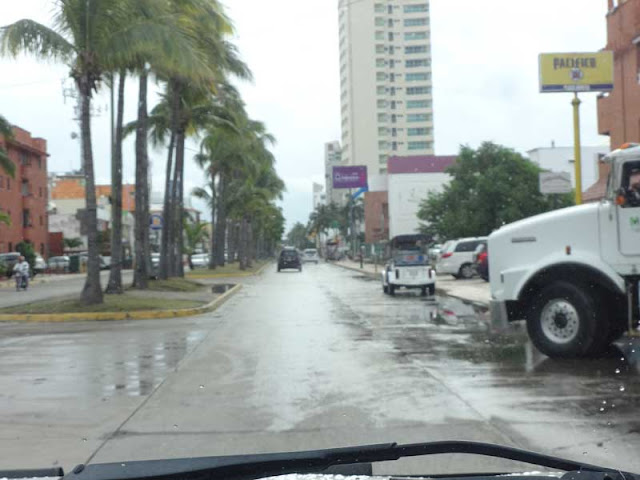 Everyone’s cars will need washing.
Out where the divers are we noticed the huge Mexican flag was up for the first time in a long time. There were also canopies out there…maybe for the big bicycle ride going on. 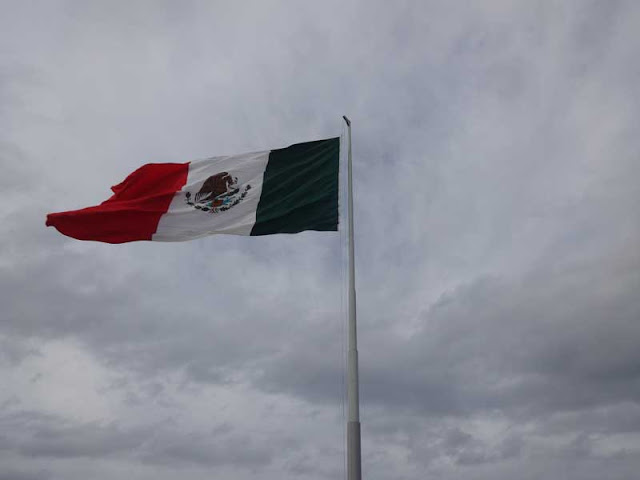 First time ever that we’ve passed that area and no food/souvenir stands were there. In fact several vendors were just arriving and setting up. Guess everyone believed the weather forecast and took everything down including the frames and awnings of the stands. This one selling cocos was just getting set up. 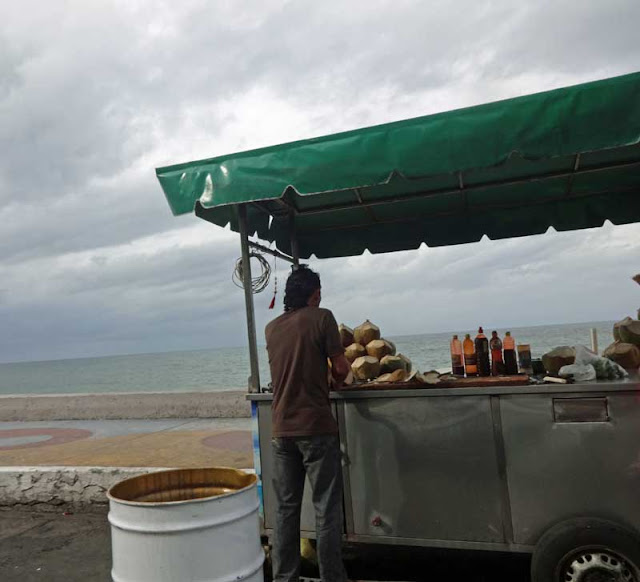 We got into Centro and went to our favorite parking lot. The gate was part way open but not open enough to drive in. So Bill blew his whistle horn. The man who manages the lot on weekends and nights came to the gate and came out. Then he closed and locked the gate??? He came over and told Bill he had just had an argument with the owner, his son-in-law, and he quit! He was going home. Okay. So we parked in the street. Walked to the optometrist to pick up Bills glasses. They were closed. So we then walked to the bank to use the ATM, there were long lines. Oh well, we waited nothing else to do. Bill went up to use the machine, he was there quite a while. Finally he left and told me, “It won’t give me any money.” Huh? So he went to the girl from the bank that answers questions and asked if they were working okay. She told him yes, he shouldn’t have any problems. So he went to another machine. Same thing, wouldn’t give him money. Crap. So we left and headed back to the optometrist. It was now open and his glasses were ready. He had left his old frames to have the new prescription lenses put in them. Cost US$20. So for less than US$100 he got eye exam, a pair of new glasses with clip on sunglasses and new lenses in his old frames.
Now he can see. So that went well.
As we were driving up the street he suddenly pulled over got out and checked the driver’s side tires. Got back in with a “look” on his face. When we started up I heard it too. Tack, tack, tack. Crap another foreign object in a different tire.
So home we went, didn’t pass any llanteras [tire fixers] on the way.
At the campground is a wonderful person who keeps up the campground, gives information and knows everyone. Raphael is his name. He is a marvel.   (He is saying Hi to you Doug and Nancy.) 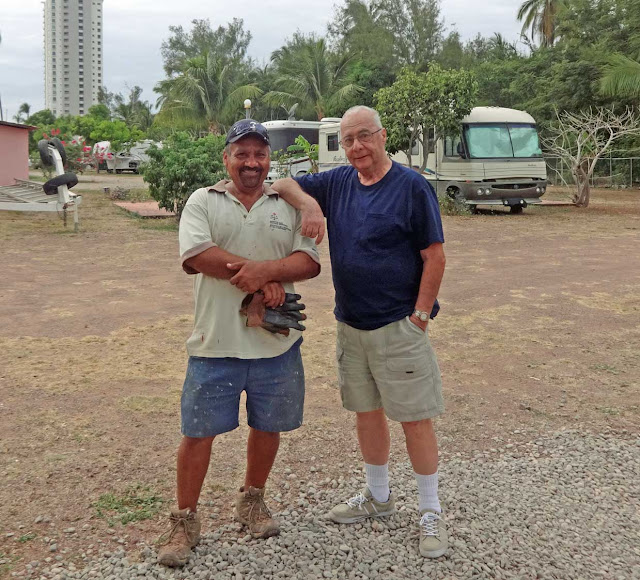 Bill told him about the tire and ½ hour later up pulled the Llantera in his truck. 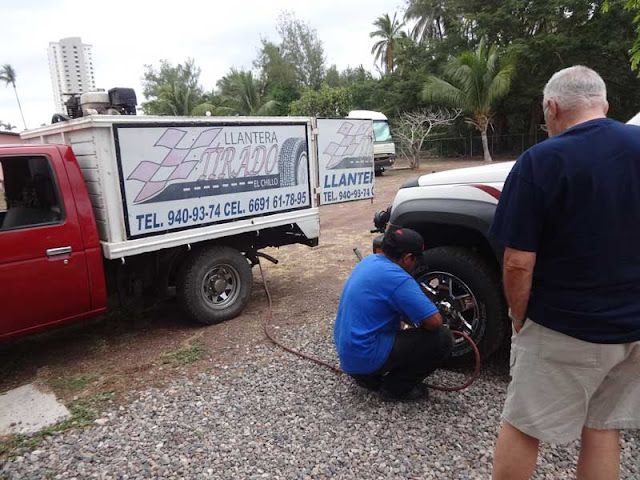 He pulled the tire off. There was no sign of a foreign object or hole! Then checked for leaks using a bucked of soapy water and a brush. No leak. Well better safe than sorry. Guess something small had just get stuck in the tread. 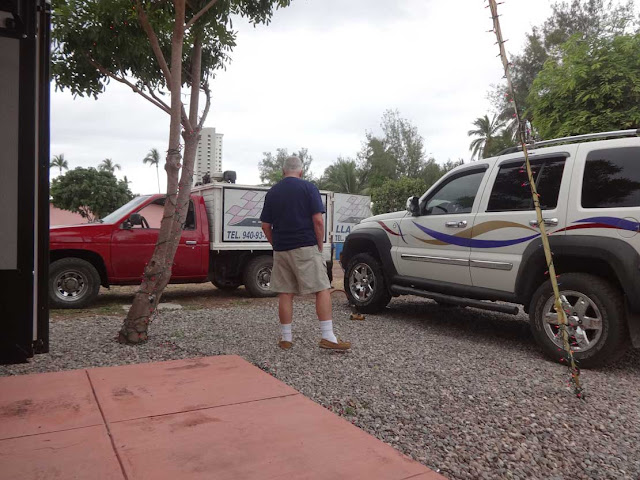 Service at home, take off, check and put on tire. US$14.
After he left we went to the Soriana market and used the ATM. No problems. Got an exchange rate of 20.50 Pesos to 1 US$. We also bought oranges and rolls for the bread fruit tree.
Loaded it up when we got home. Then the chacalacas came. 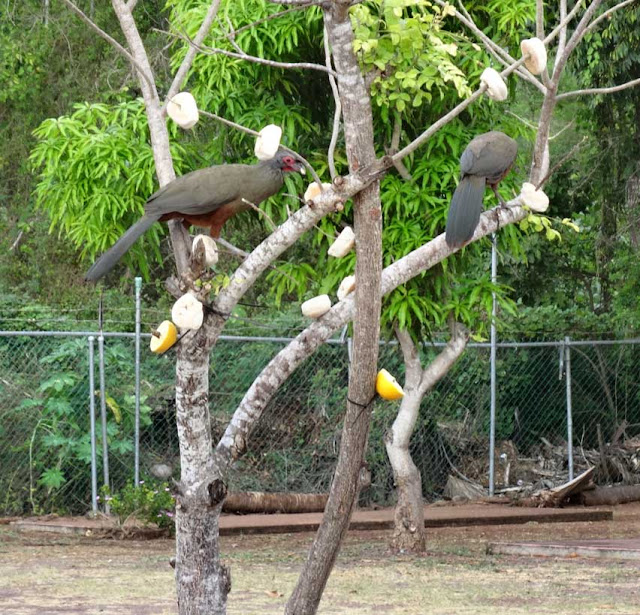 They are one ugly bird. And the tree was empty when they left. 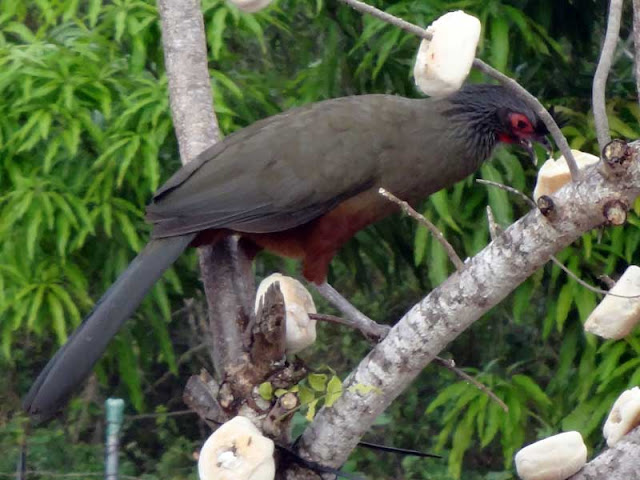 From the campground it looked like there might be a pretty sunset so we jumped in the car heading clear across town to the lookout point by the harbor. Going through town behind a couple of pulmonias. 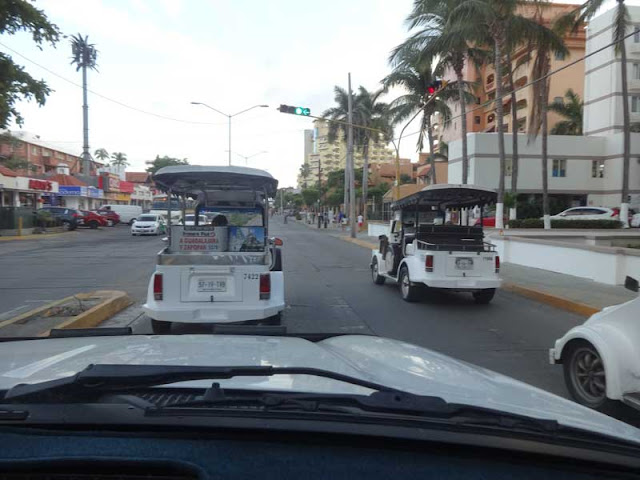 Then past one of the bicycle riders trucks all loaded up. 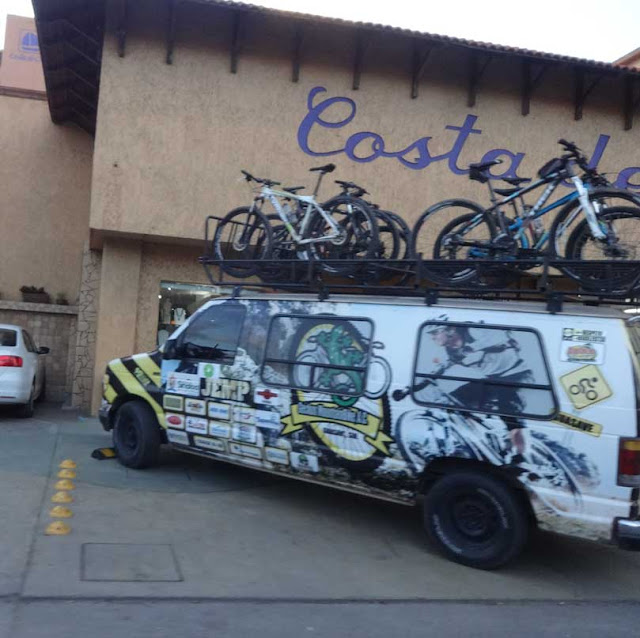 Going along the Malecon this is the best picture I got... 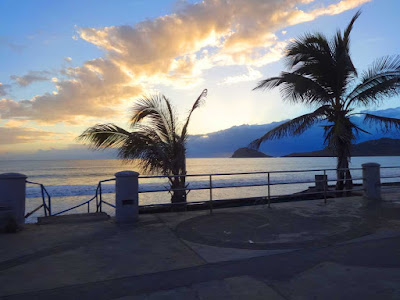 The problem was the huge fog bank, once the sun got below it good bye Charlie. 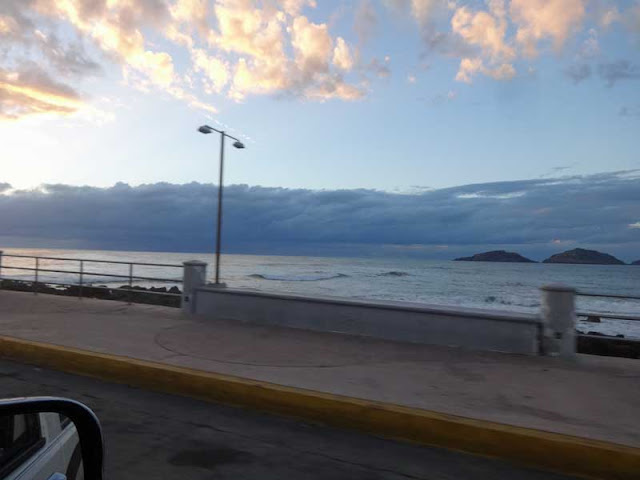 From the lookout point – just a tiny bit of color at the horizon. 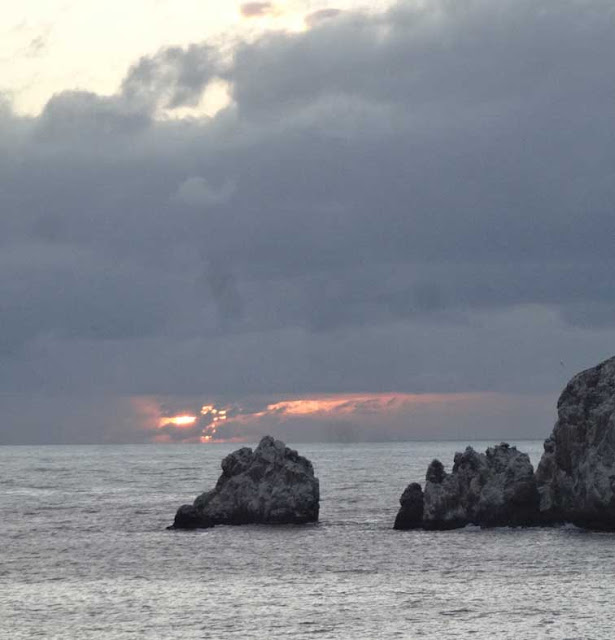 A closer look at the color. 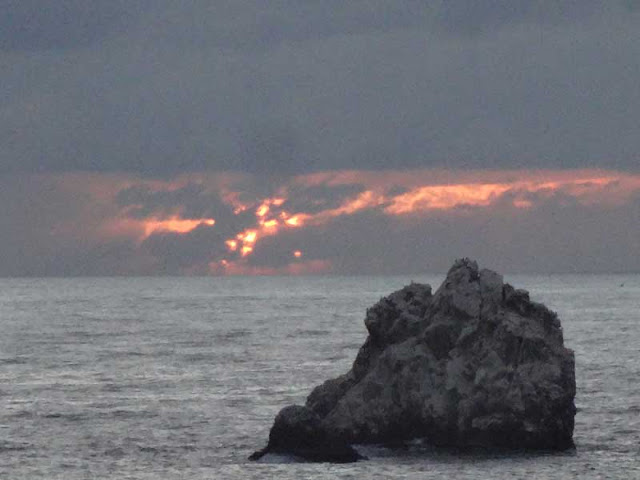 On the way home we stopped at Burger King, I know, in Mexico? Got our order and sat down just as a zillion kids showed up for a birthday party. Their voices sure echo. We ate fast.
On home – TV was still acting funky as there was still a heavy layer of clouds. But did find out the soccer game score 1 to 1 tie.
Almost forgot, Bill's Nook decided to not work, the pages wouldn't turn. We both fooled with it and got no where. So he turned it off and back on and it was fine. Perfect end to day.
Finally warming up in here. Tonight I know we are going to the Plazuela with and to meet friends there. Other than that, who knows?


Whoa, the birds are pecking at the windows and looking in the front window, guess one of us better take some food out there.
Posted by Carol and Bill at 7:17 AM

Sorry that you had to have one of those days, but that makes the good ones so much better. Don't you love the prices for glasses and tire repair. I can't understand how they do it so inexpensively, but I have sure appreciated it the times I have been there.

Ahhh.....Raphael!!!! A huge hug and hello to you from Canada! We are missing seeing you all this year! We will be counting the days until we get to retire AGAIN!!!

As bad days go it really wasn't bad, more annoying. Today it is maybe going to rain again, and it will be cold tonight. Might have to change our plans