Almost to the end of the year. Keeping busy as usual. 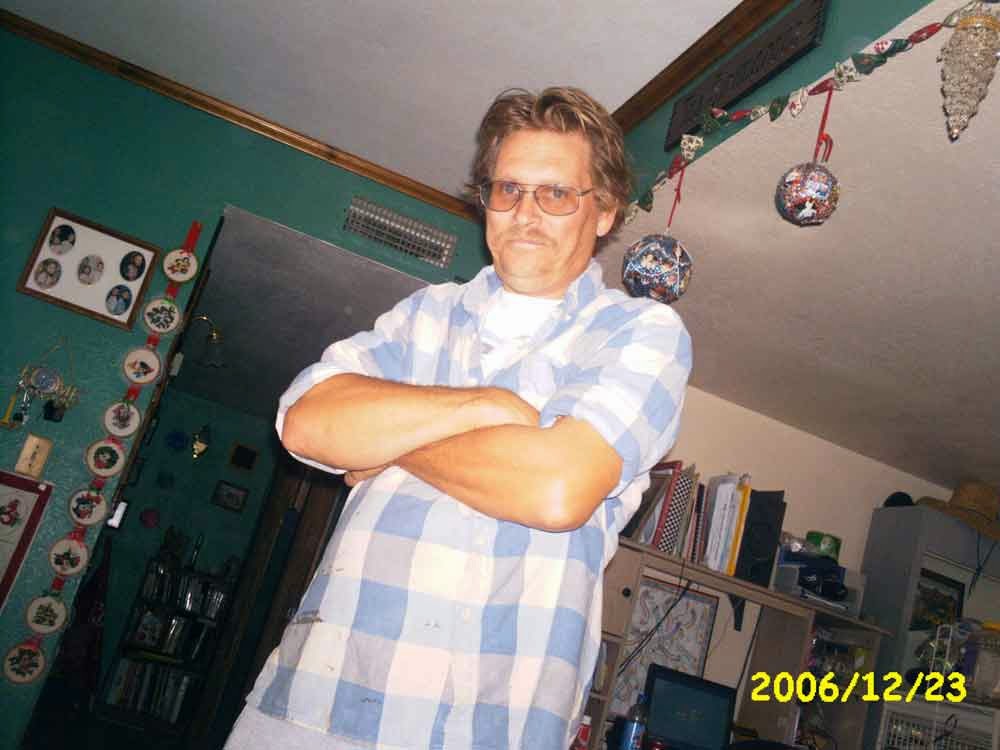 
And only God knows why.

So where were we? Oh yes Tuesday. We picked up Mike and Lorie and went out to lunch in the Golden Zone. It was packed there! Two cruise ships in and many, many tourists from all over Mexico. This is the entry way into an arcade with shops and a restaurant at the end right on the beach. There is a band playing there. We were going right across the alley, you can see the umbrella we ended up sitting at. 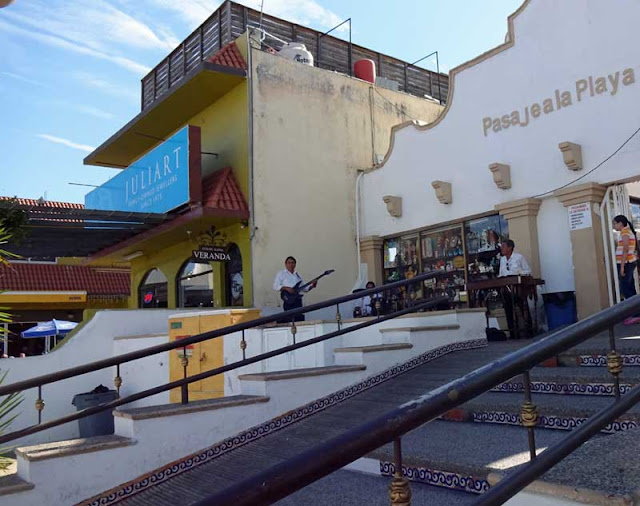 We went to Lucky B’s, which I discovered is short for – see picture. 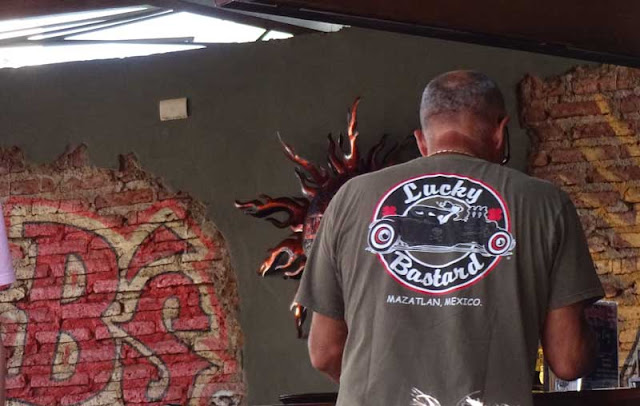 Amazing amount of traffic on the street. We were lucky to find the last parking spot in one of the parking lots.
Lots of vendors walking around. 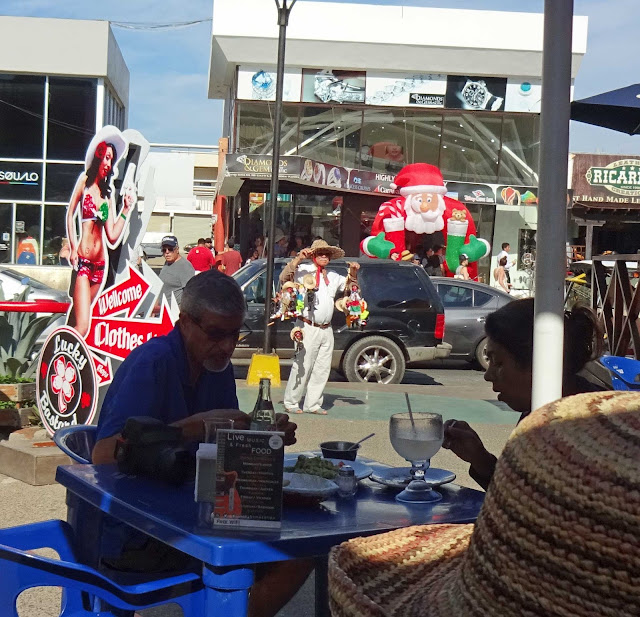 We had an excellent lunch and lot of fun watching the tourist buses unloading and loading. Bill and I both had fish and chips. Very, very good. This double decker was packed full. 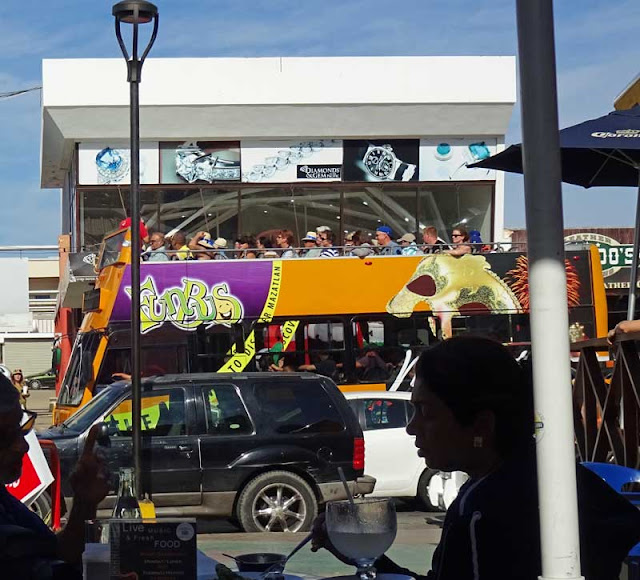 After lunch we went to the Michaels Gallery where we bought our tiles a couple of years ago. They have such interesting and colorful stuff. 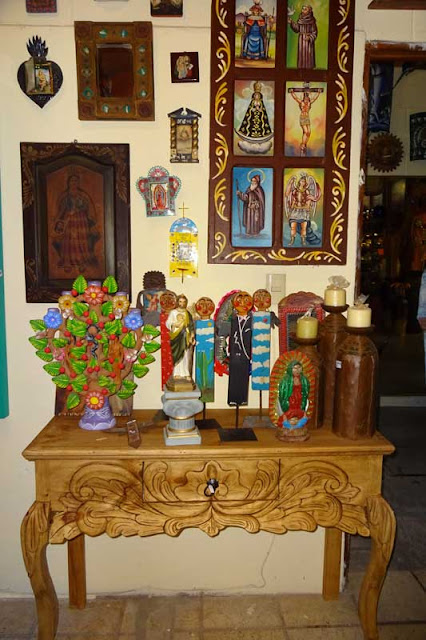 Some Day of the Dead stuff. 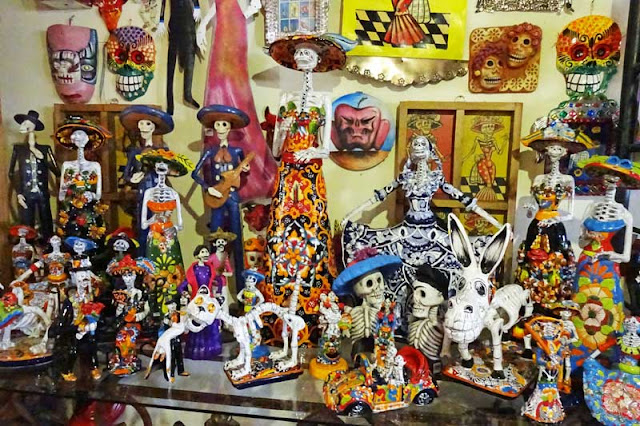 Walked out to the beach, wall to wall tourists and vendors. 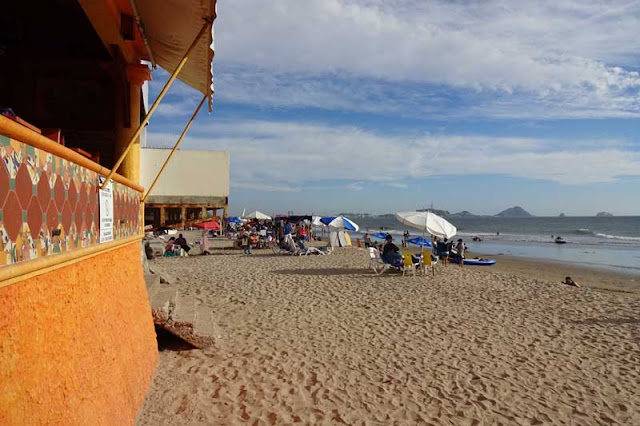 After picking up the car we drove out to the lookout point by the harbor. The new light posts have been installed, very pretty. Don’t know if they are working yet or not. 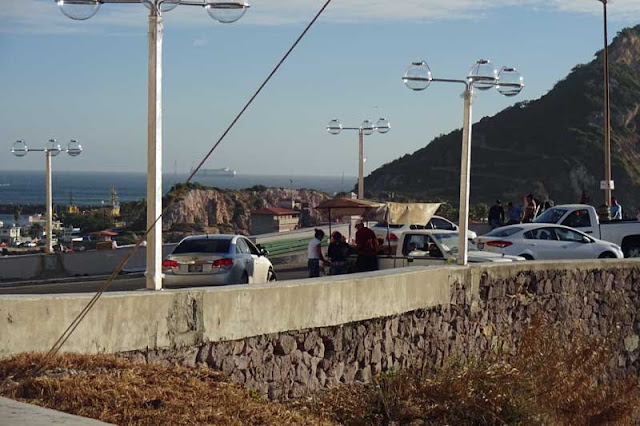 Also lights running all the way down the hill to the water. 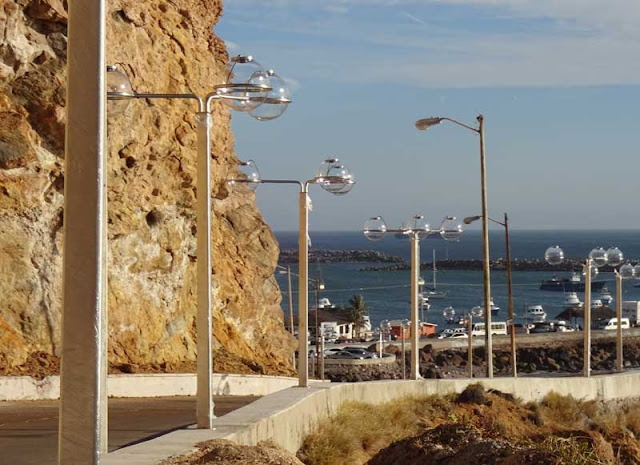 Of course we had to stop in the plaza and walk around a little. Our friend’s art gallery NidArt was open so we stopped in and watched his wife working with the leather. 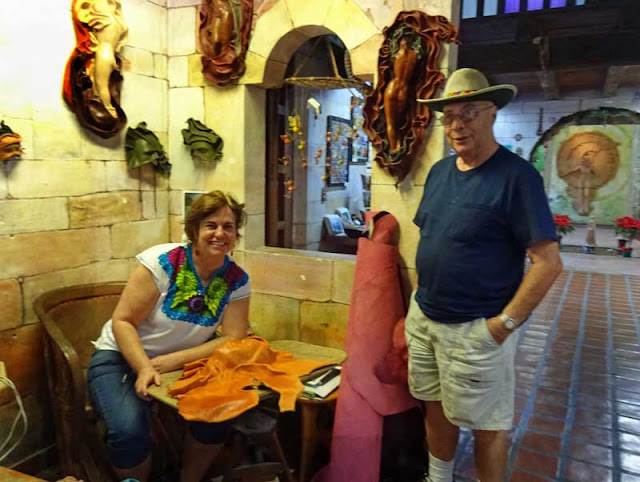 Wednesday morning we went to Torres for breakfast. I figured out it is cheaper to eat out than to cook. US$10 for the two of us! The breeze coming in the open windows was so cool we had to close the windows near us in the restaurant. But someone was out enjoying the windy day. 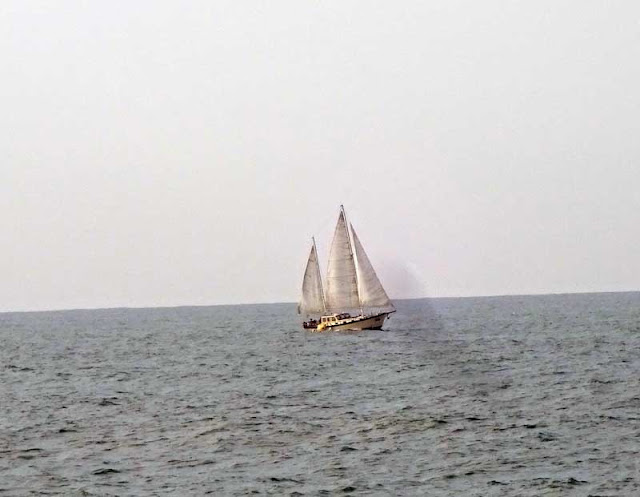 Yesterday we went out to the fishermen’s area in Cerritos and went shopping. This is my favorite shop there. 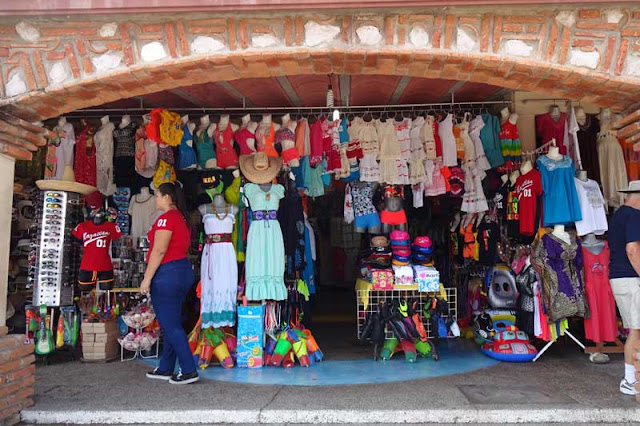 Lots of people enjoying the weather and the beach. 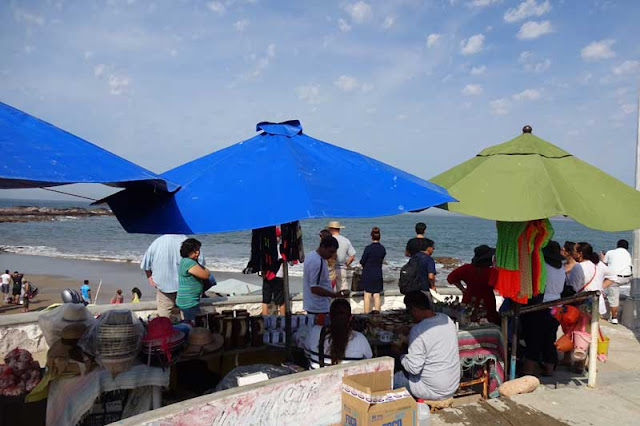 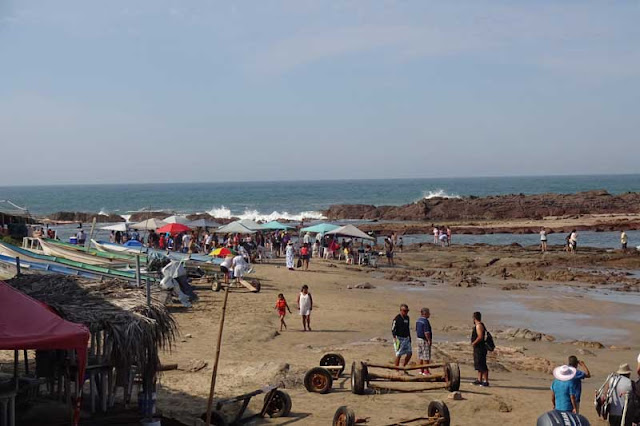 This fisherman was cutting stray threads off his net. 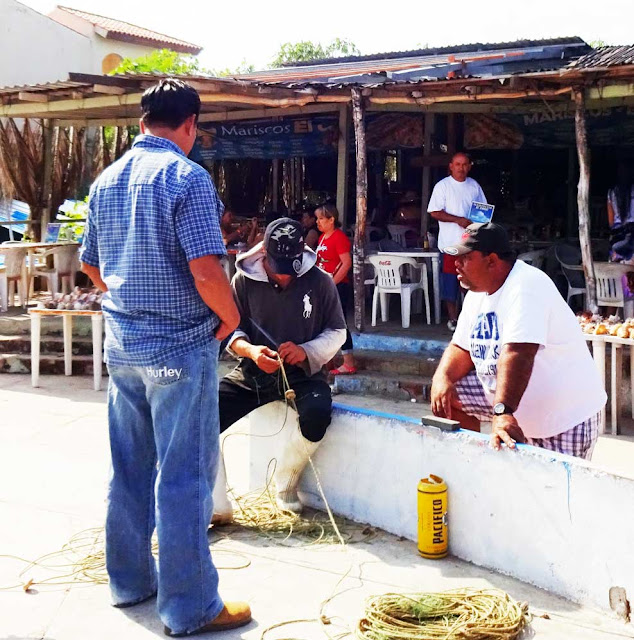 Walked into the RV park there to look around. Most of the RVs stay there year around. There is no way to get them out. They’ve  all built big palapas next too and over them and put in brick walls and whole outdoor kitchens. So guess what Bill wants to do now? Next year. 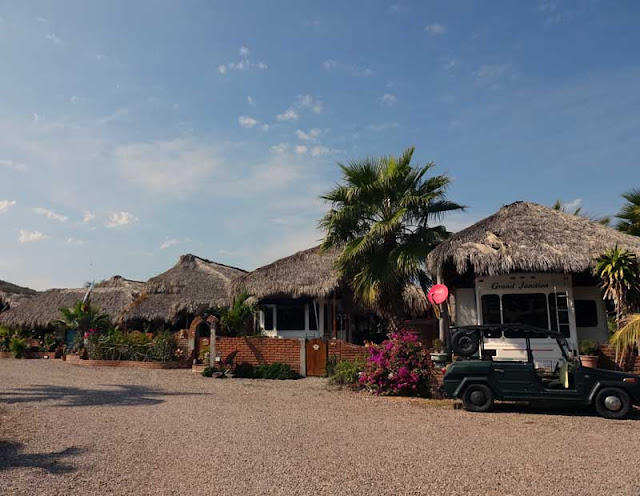 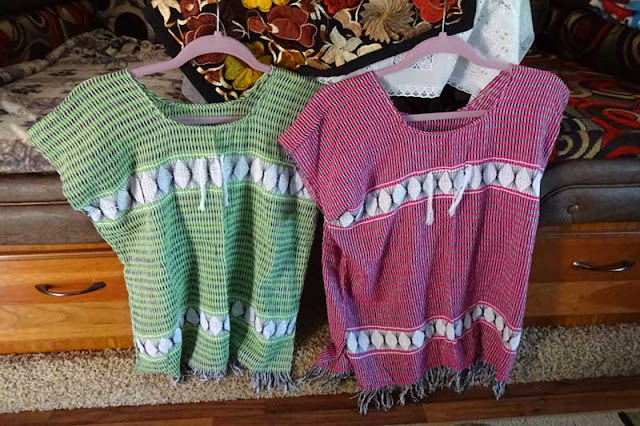 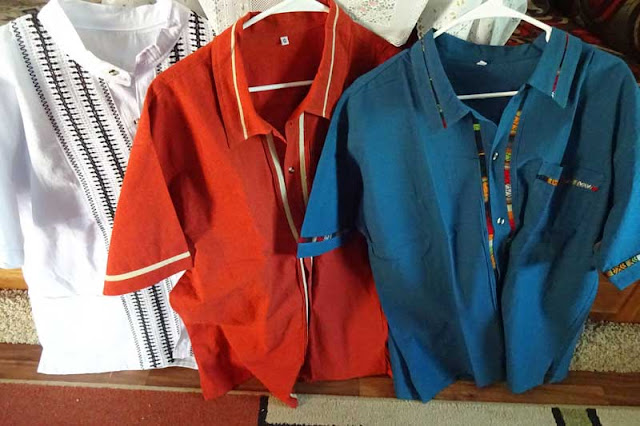 And we got a pretty pillow cover. Total US$58. 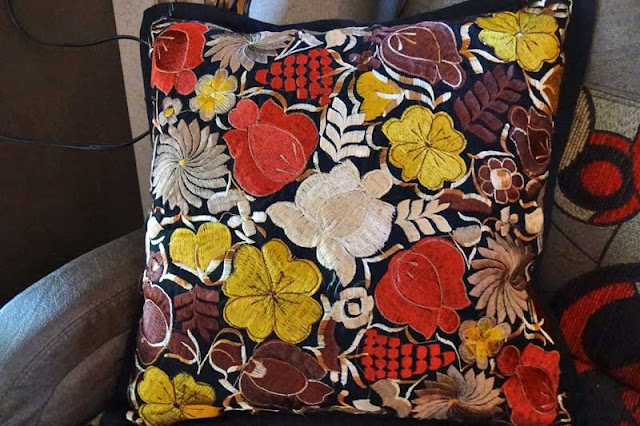 Yesterday afternoon there were some young men working near the top of the cell/microwave tower next to the park. It is a very tall tower. 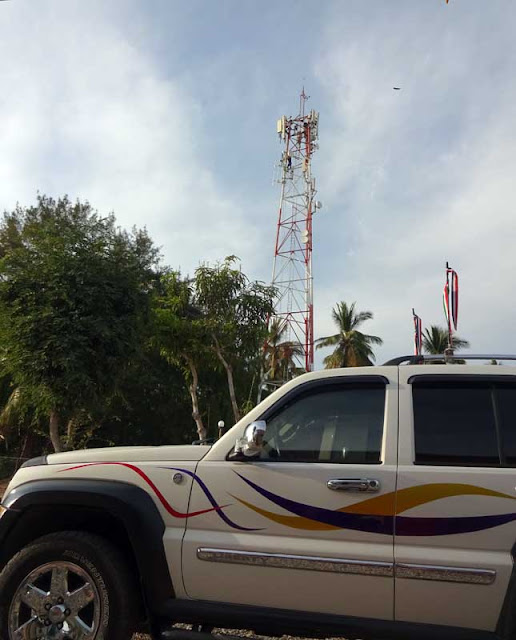 No safety belt – When he pulled the dish up it came through the trees so he is having to take the part of the tree it brought up with it off. 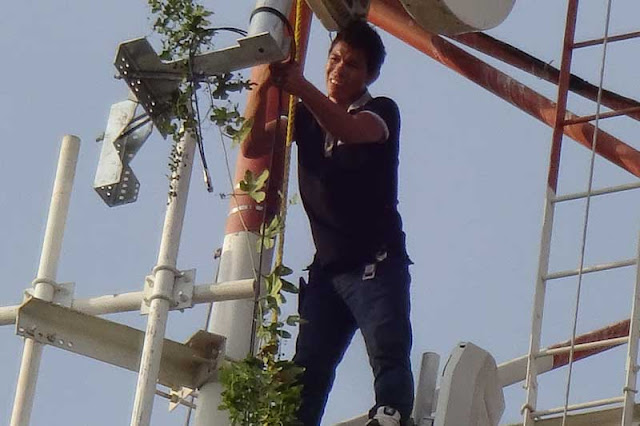 He was joined by two more guys. Guess they worked until after dark. 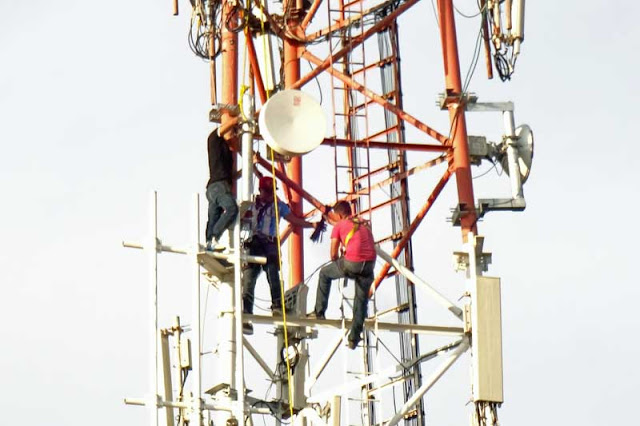 Just read that Nevada had several earth quakes the last couple of days. “Kent said it should serve as a reminder that Nevada is the third-most seismically active state behind California and Alaska.” Lovely.

So sorry about the loss of your son.

Losing your dear son is a sadness that will never go away. He is in your heart forever So sorry for your loss.
I like Bills idea about the permanent homes.