Got a lot done on Wednesday in Mazatlan

Wednesday turned out to be a productive day. Looking out the door. Willie is waiting for the mechanic, the Christmas lites on the table are waiting for Rafael, the assistant at the campground, to put in the tree and Willie is also waiting for the painter to come see about the graphics. Both painter and mechanic said they would be here about 9. While waiting I backed up my laptop. Try to remember to do the end of each month. 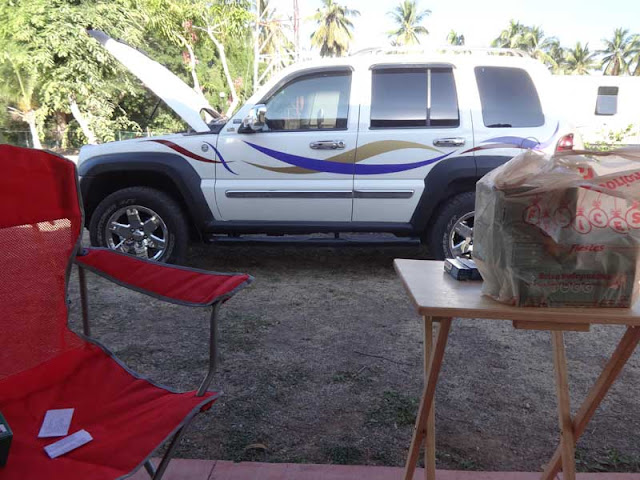 The mechanic came about 9:15. He brought a helper to install the new spark plugs. 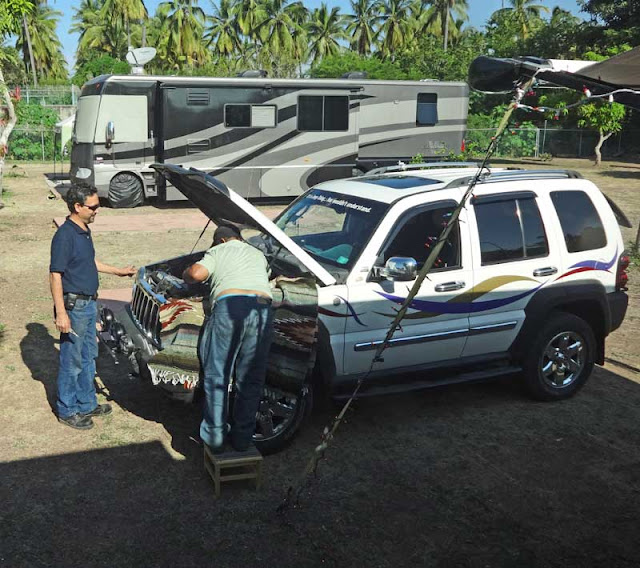 Of course Bill supervised the whole project. Willie will also be getting a new serpentine belt tomorrow. 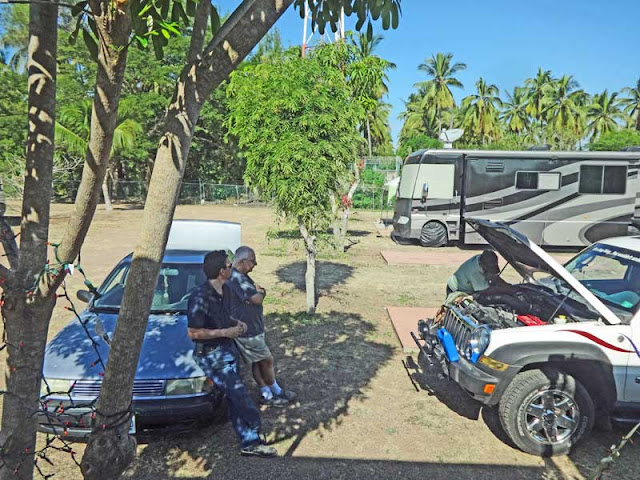 While the mechanic was here the vegetable truck came into the campground. Didn’t buy anything today but everything looked and smelled great. He comes 3 times a week. 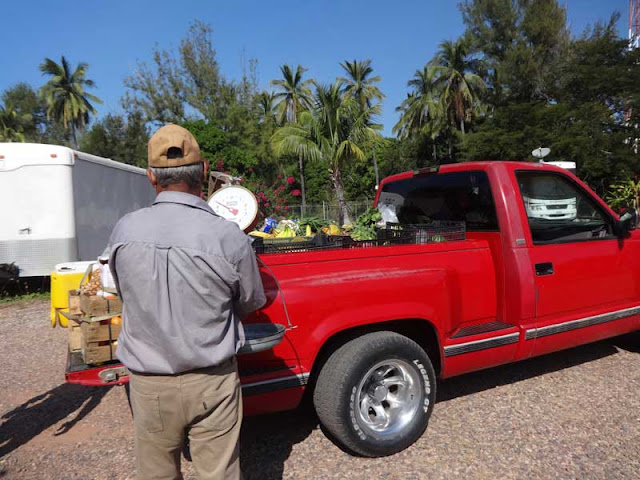 And here is the painter at 11:15…he looked and listened to what Bill wants done and will be back on Saturday to start. However it is supposed to rain Saturday so we’ll see. I’ll leave it as a surprise what will get done. It will be a surprise for me too. 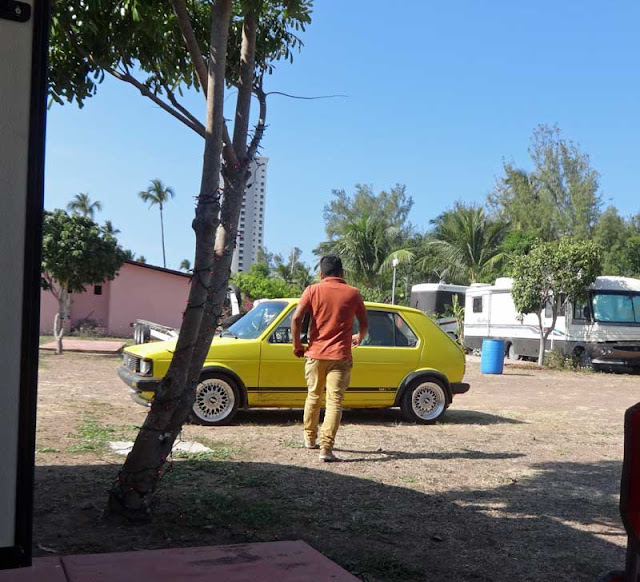 After the painter left we jumped into the Jeep to head to Centro to pick up Bill’s new glasses. The hospital he spent so much time in a couple of years ago looks like it got a new paint job. 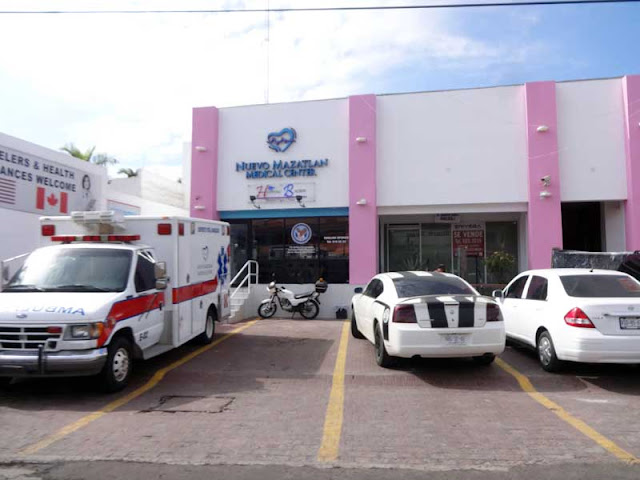 Lots of traffic in the narrow streets in Centro. Delivery trucks have to park where ever there is a tiny space. 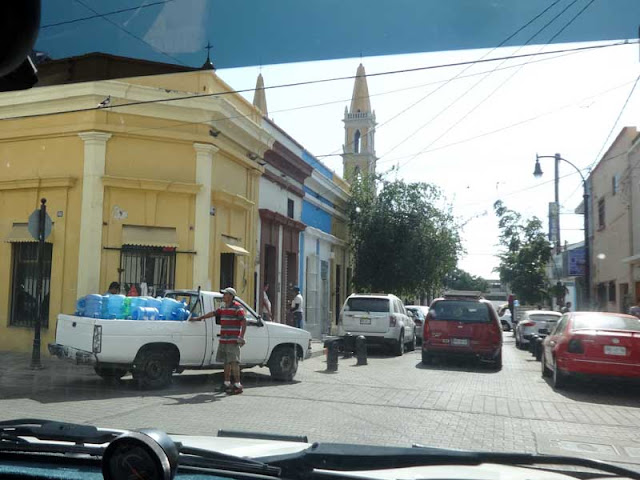 A delivery on the right and a car washer on the left. 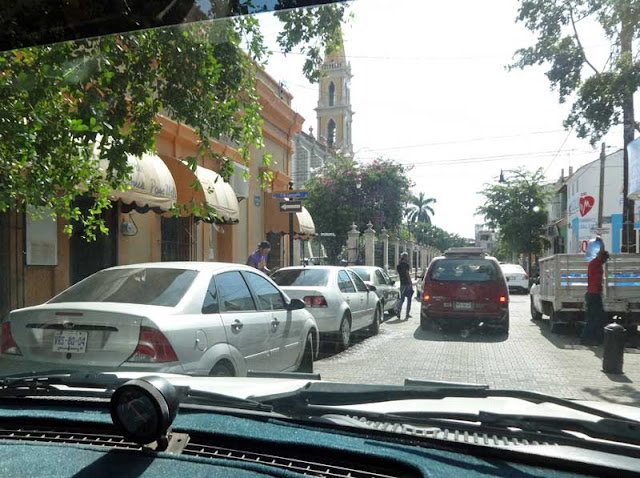 Into “our” parking lot. I see they now have bathrooms the public can use for 5 Pesos. 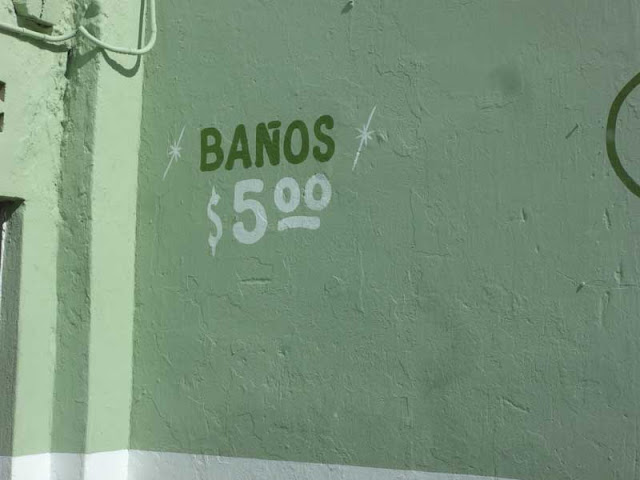 Walking to the optometrist we passed this intricate metal work over a window in an old but kind of restored building. 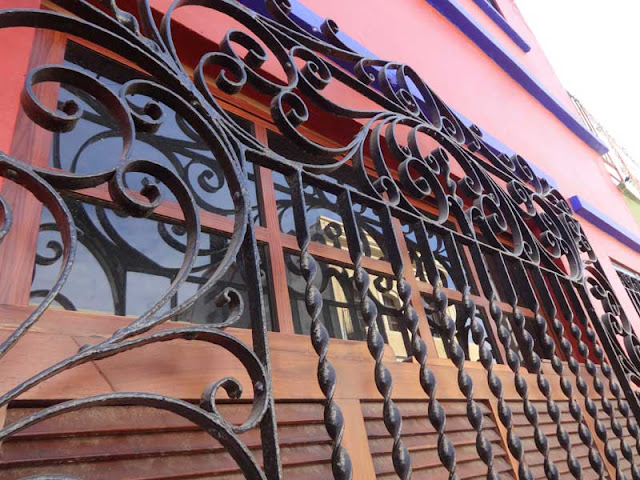 Bill with his new glasses on. They also have snap on sun glasses. He is amazed at what he can now see. Can even read small print at a distance. He left his old frames to have new lenses put in them too. When he mentions how much better he can see now - makes me wonder how much he couldn't see before ... especially when he is driving in this crazy traffic. 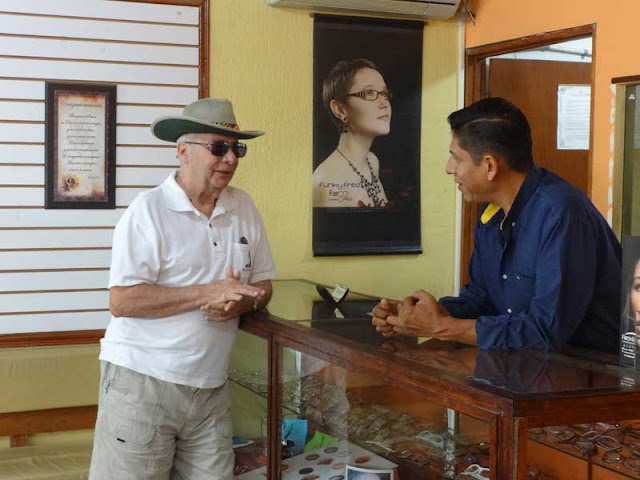 Saw this old car as we were walking along. Subtle flames on the front. The letters in the back say FORD, but it sure looks like a Chevy to me. 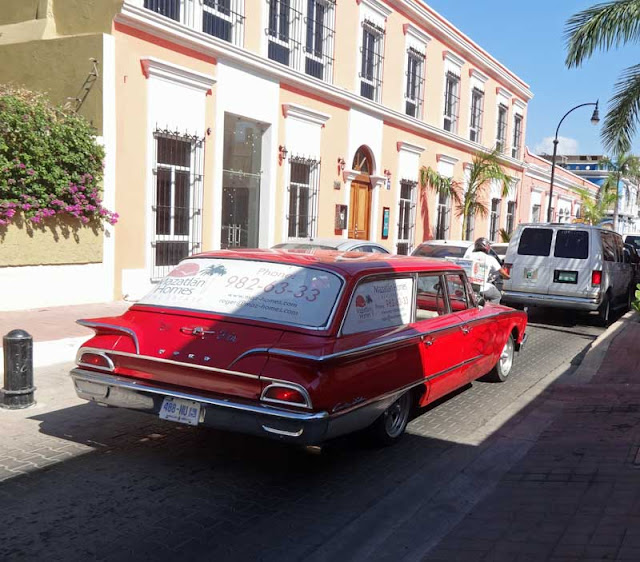 We were heading to the camera repair person, there's lint on both of my camera's lenses. But he was closed - so closed we're not sure he is still around. Will keep checking.
A street side car washer’s station. Several buckets of clean water just waiting for a car. 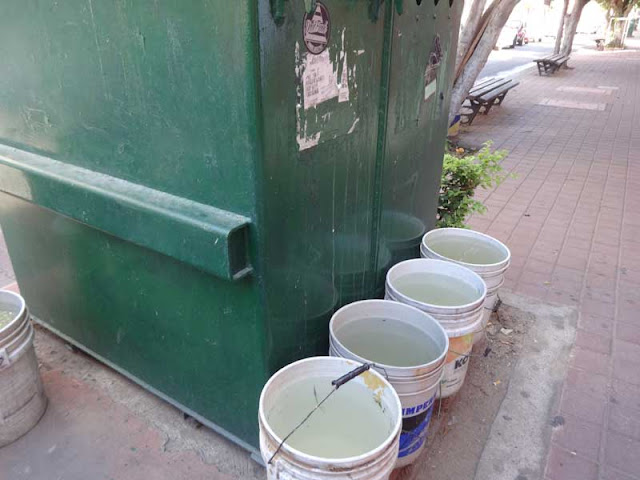 We decided to go to the Plazuela Machado to have some lunch. These guys were working with big piece of white lattice work. Stepping on it to bend it. What were they going to do with it? 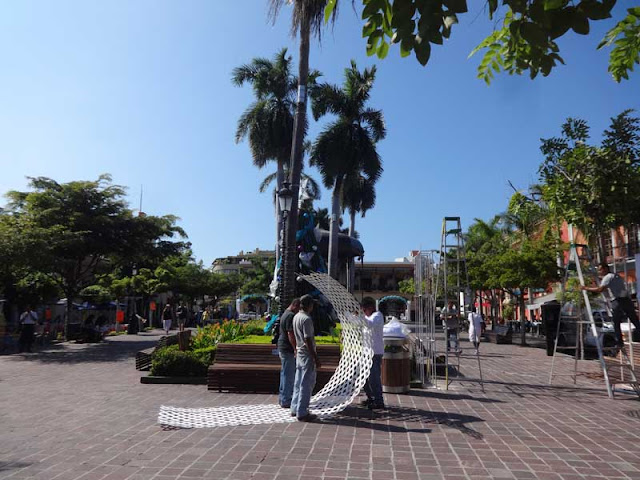 Walked around a little before eating. That is Beach Burger over there with the gray awning. 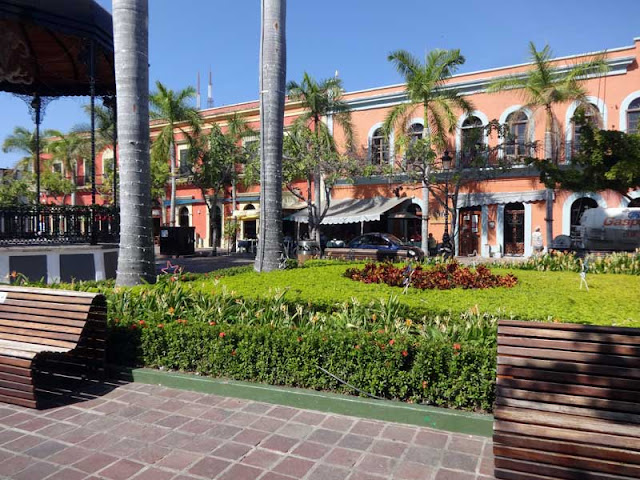 The plantings in the plaza are really pretty this year. Lush green with bright red poinsettias around the edges. I see an arch over the sidewalk… 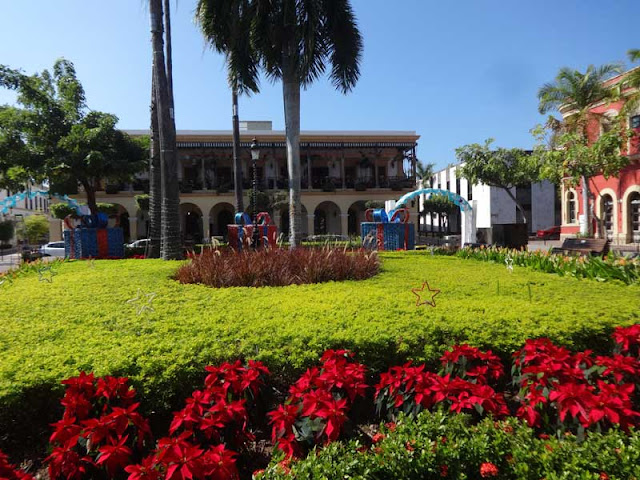 So that is what they will be doing with the white lattice work. Kind of cute. 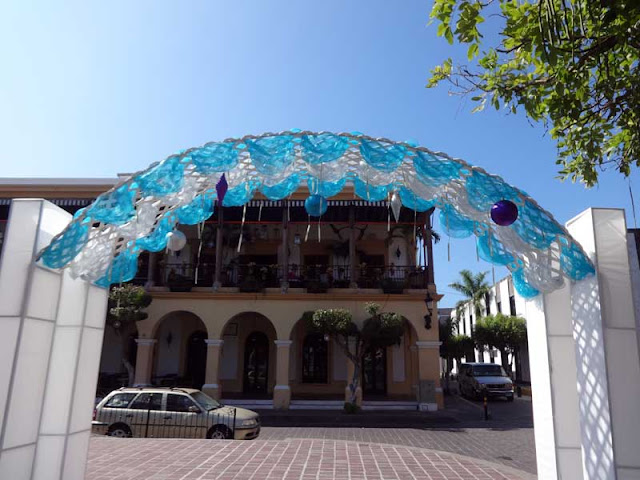 From the amount of spaghetti laying around it looks like there are going to be more lights and decorations put up. The two guys sitting there never got up or did anything the whole time we were eating lunch. Guess it was their lunch time too. 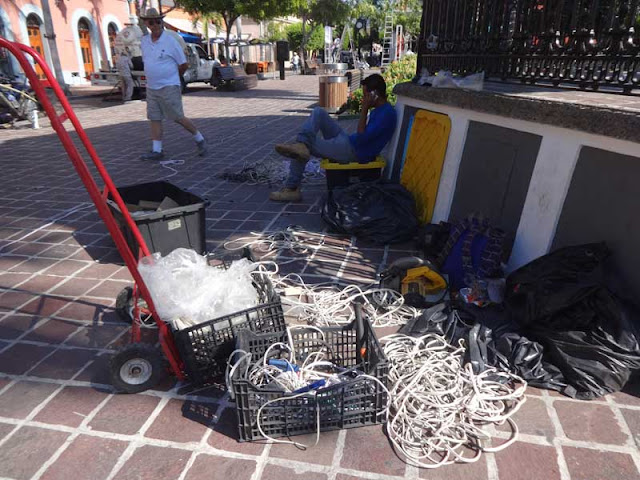 Some of the decorations there now. Great big colorful packages. 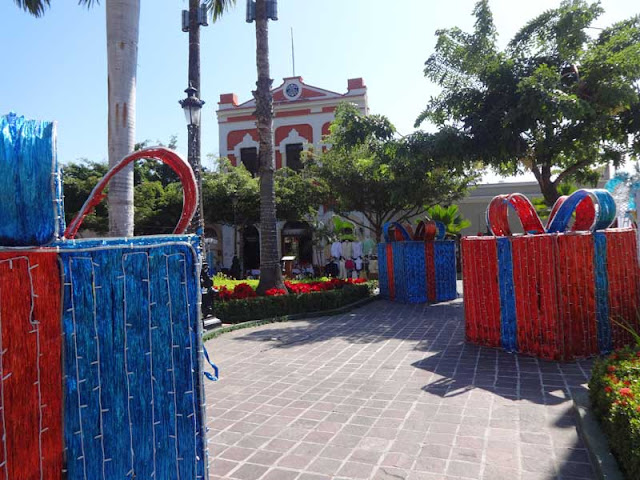 While we were sitting and eating we were watching the beginning of the new arch. There will be one on each corner. 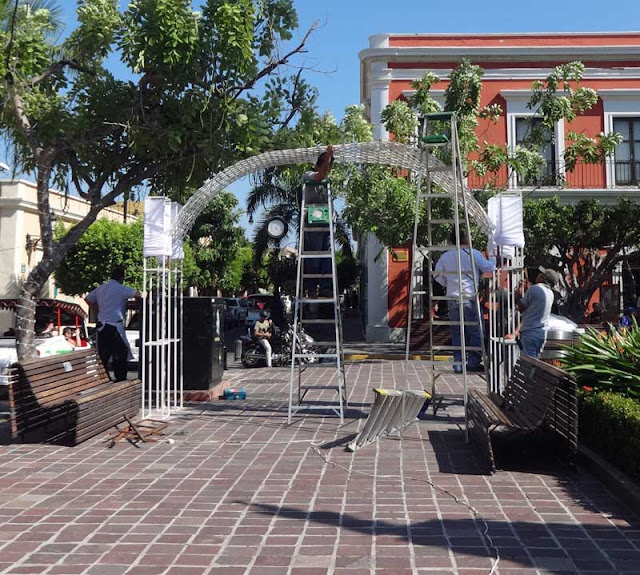 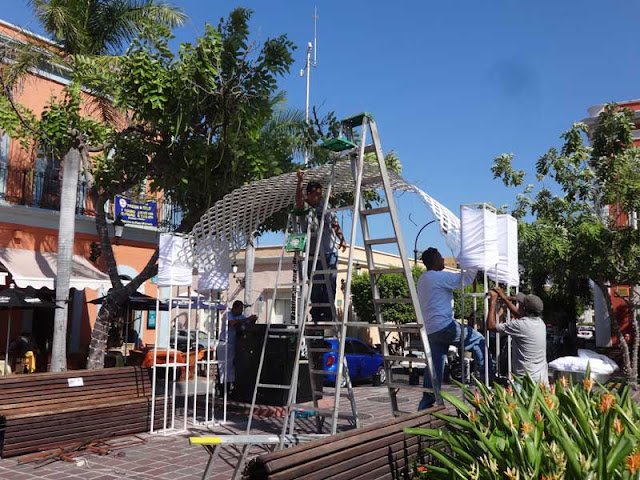 Had some entertainment while we were eating. She was really good. Finished with 5 hula hoops in the air. 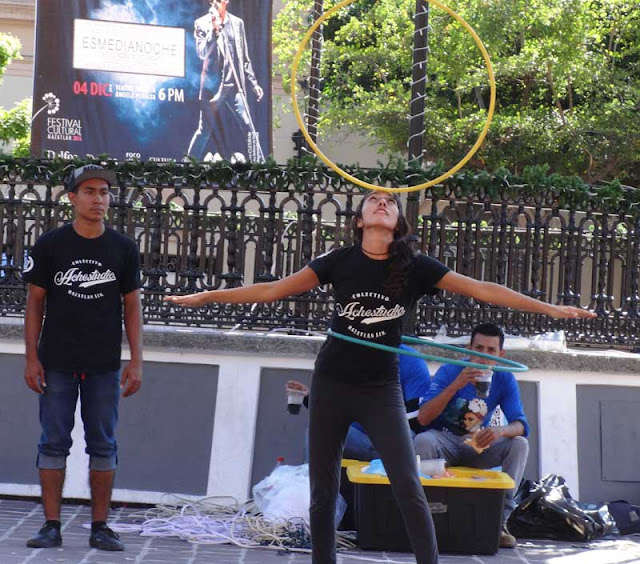 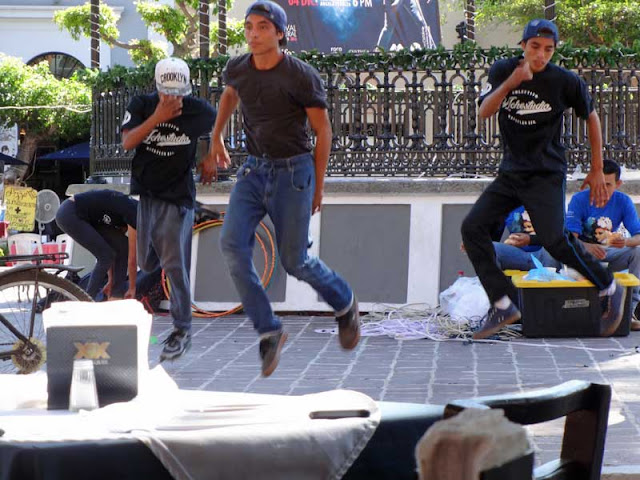 I took a video but will have to go up to the office to upload it. Using up my GBs too fast.

These kids were entertaining. I think they are the same group Tioga George got up and danced with last year.  Put a lot of thought into their routines.
Not long after we got home the dump truck showed up with two cubic meters of rocks to put down around our site. US$30. 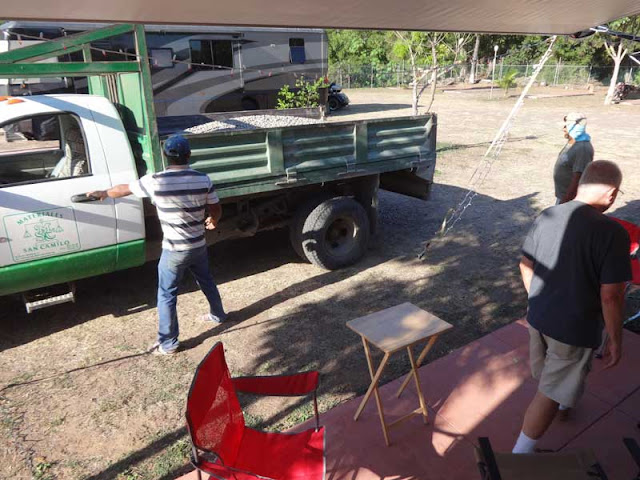 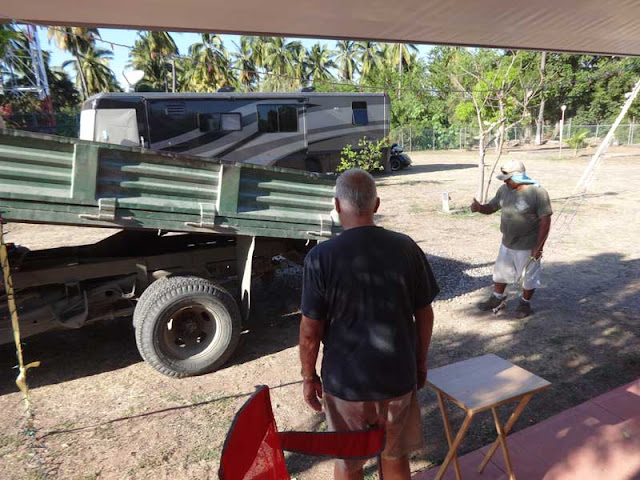 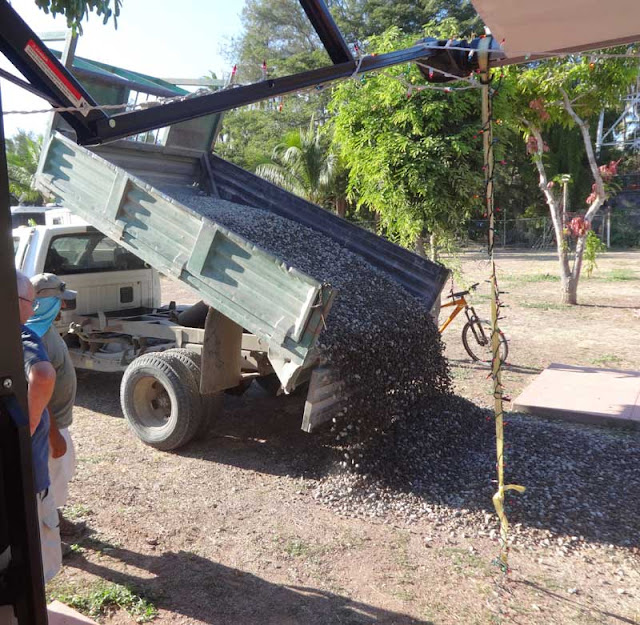 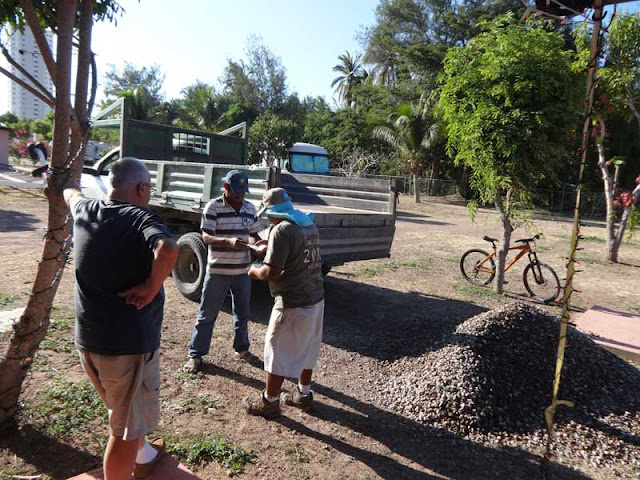 Raphael spread the rocks so now we won’t be tracking in so much dirt. I hope. Need to get the vacuum out and clean things up. And yes we paid for it. Several sites here now have nice rock instead of dirt.
Christmas lites up. 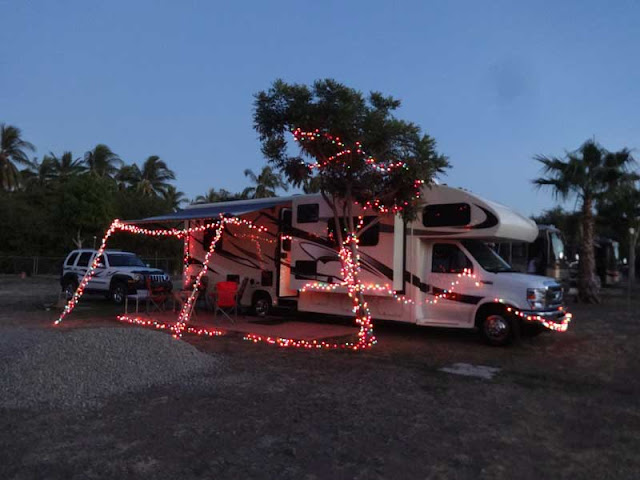 We took Raphael home, picked up his wife downtown then drove them to their house. He has to leave home at 4:00 a.m. to get to work by 7:00 taking the bus. It took us less than 15 minutes to get from there to the campground. Got to admire the people and their work ethic.


And I even cooked dinner last night. Easy dinner - chicken breast, mashed potatoes and canned corn.
Not sure what we will do today. But something will come up.
Posted by Carol and Bill at 6:37 AM

Oh my goodness!!!. You find so many things to see and do. Makes me want to move there even sooner. Bill speaks really good Spanish, right I know that would help me a lot if I could learn some basic Spanish. Again, I sure enjoy your posts.

Get a hold of the program Rosetta Stone and start learning. He says it is one of the best for learning a language. Probably can find it on line for a good price.