Christmas Eve Day. I woke up about 3:45 and tried going back to sleep. I did kind of but weird dreams and time spent laying there thinking – one should never get to thinking while lying in bed in the dark. It is best to just get up. Which I did a little after six. I got to thinking about our pathetic display of Christmas here in the RV. Two dish towels, two place mats and two plastic decorations in the window. At home I have a shed full of decorations that have been collected for years. I kind of miss them. Haven’t had them out in 10 years. I know decorations is not what Christmas is about but…
And then I looked out the window.That was a real mood changer. The prettiest sunrise since we’ve been here. 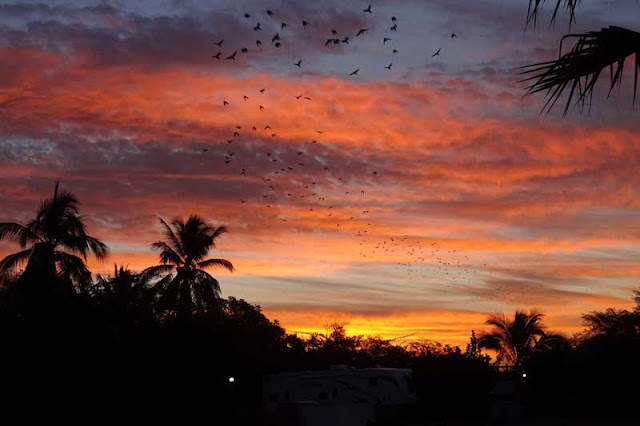 This was yesterday morning – couldn’t even see the building across the street so much humidity in the air. 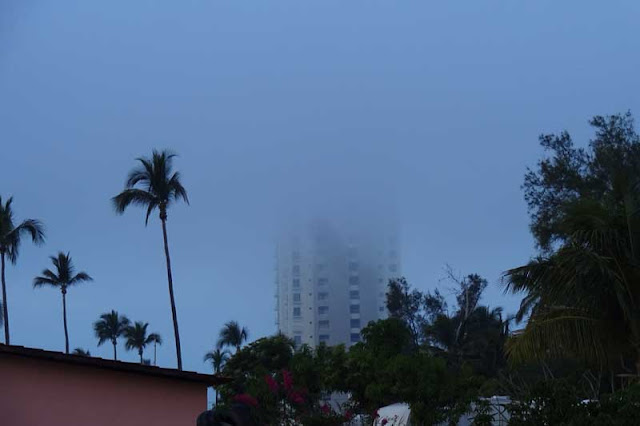 But to get on track with the blog.


Wednesday morning Roberto, his wife Gloria and their daughter America came over and we all went to the beautiful restaurant in El Quelite. Some of the sights on the way there. An arch with nothing behind it - the road under it leads to a little town some where out of sight. Also a road side shrine. 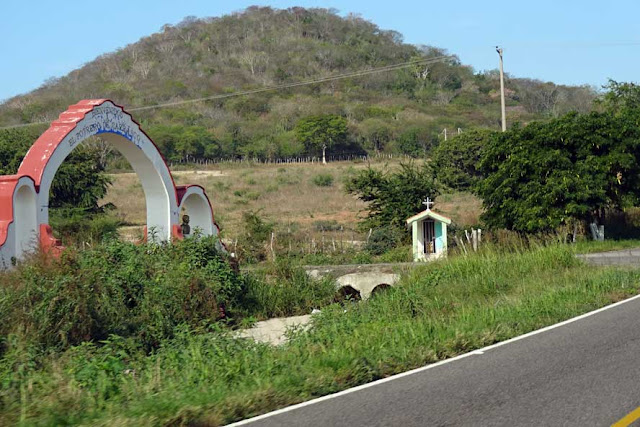 Riding along the road. 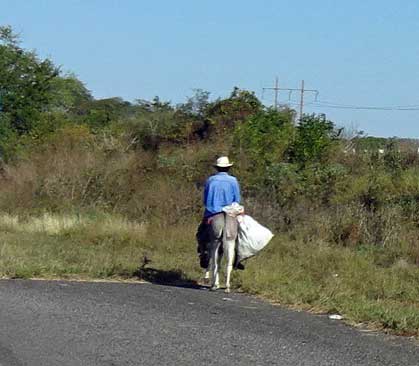 The bougainvilleas are really getting big and blooming. And watch out for the cows. 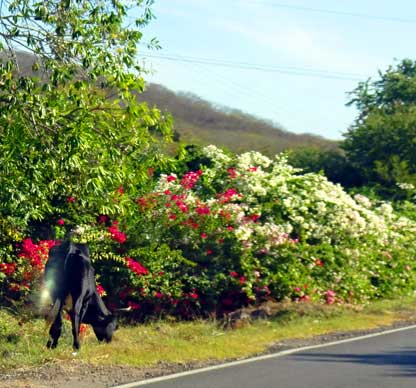 These planters at the beginning of town are new. Good stone street here too. 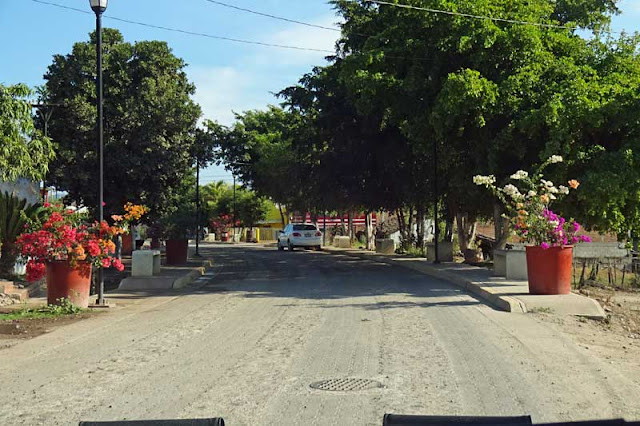 The oil in pan for the pig skin was boiling and steaming away. But no one around. He runs it using propane now instead of wood like he used to. Getting sophisticated. 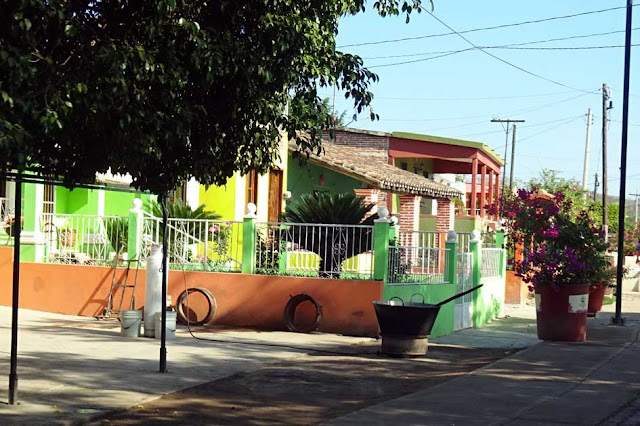 I'm trying to take pictures that I haven't already posted in past trips to El Quelite, but it is getting harder. Pretty colorful home with plants. 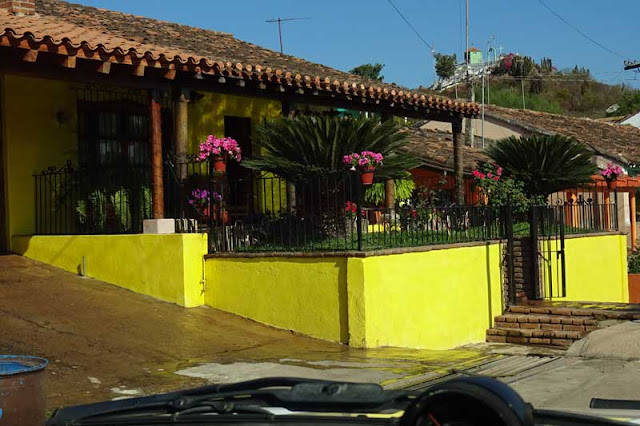 The road leading to the restaurant, just in front of the donkey. Roberto, Bill, Roberto's wife and daughter. 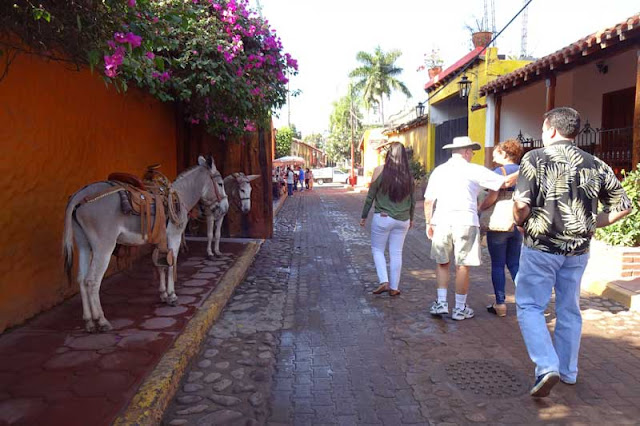 The table and we haven't received our breakfasts yet. Cheese made in town, gorditas, fresh orange juice, coffee, bowls of fresh fruit and chips and salsa. And a small dish of sweet cream like pudding. 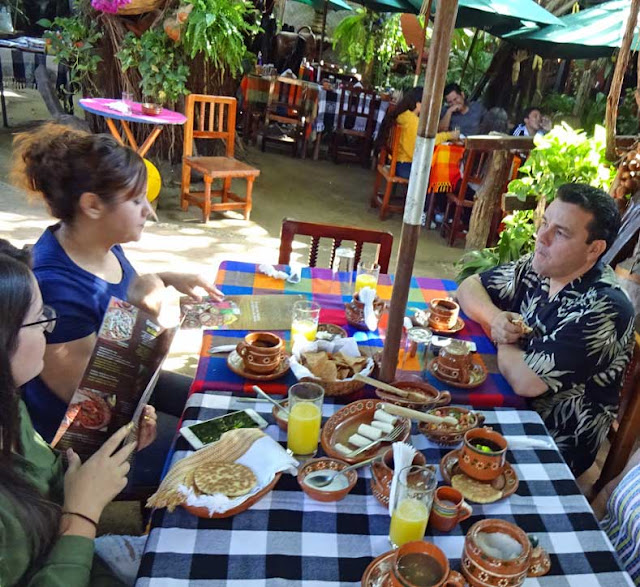 A horse looking into the restaurant. 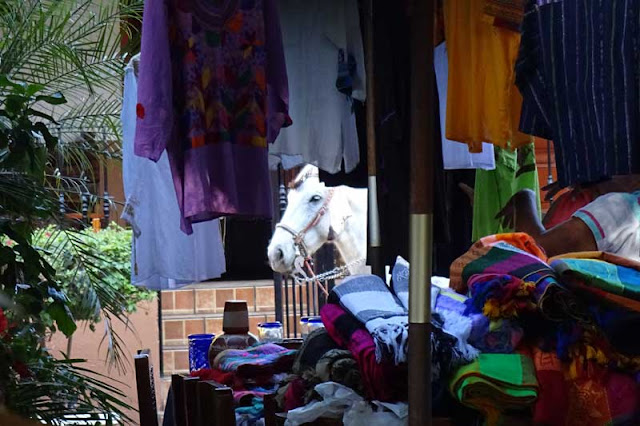 A chacalacka wandering around in the restaurant. We were told that many Mexicans catch and eat them. And they call them savage chickens. We have a lot of them in the RV park and they are very, very noisy. 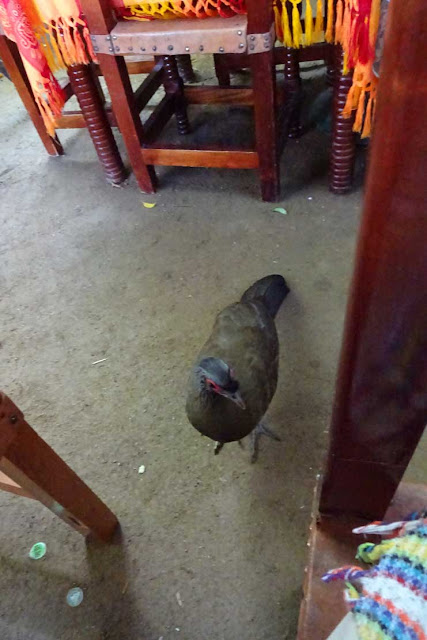 The peacock came out and rested on a ledge above our table. Didn't spread his tail though. 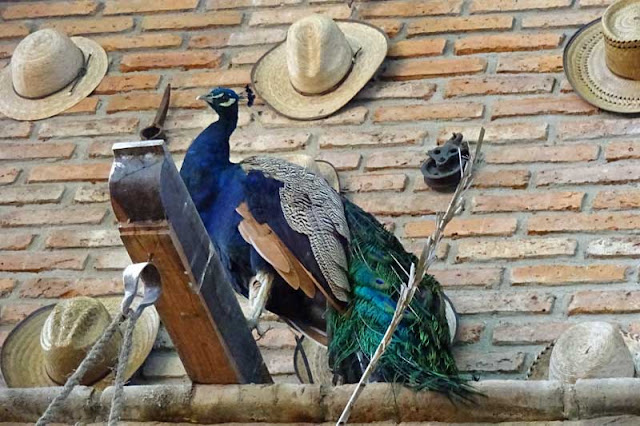 And then he was joined by another one. Notice how straight he is standing up. He was also making a kind of honking sound. Kind of expected feathers to fly. But nothing happened. 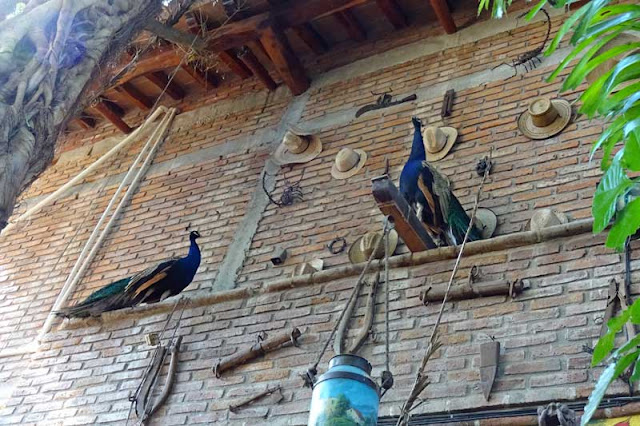 Just happened it was the day of their 20th wedding anniversary.Fun to celebrate it with them. Roberto is thinking about running for congress here in Mexico. 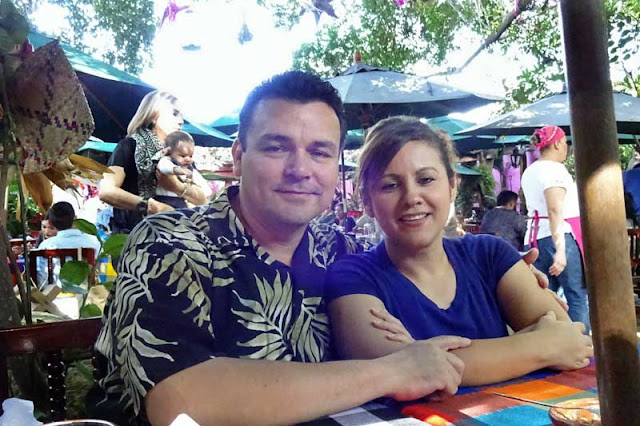 The porch at the front of the restaurant, looks inviting. 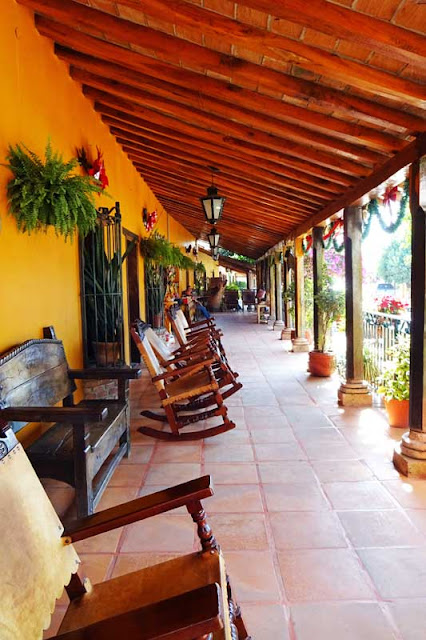 Bill talking to one of the women we know in town. She is always trying to get us to buy a home there. And she makes great candy. Always end up buying some from her. 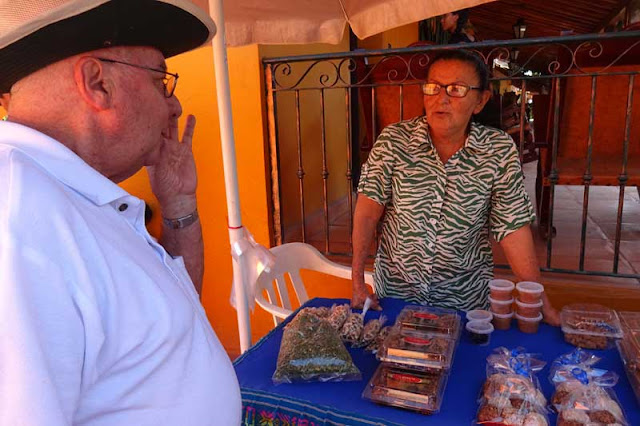 Just looking down the street. This being Christmas week there are a lot of tourists in town. Mostly from different parts of Mexico. We were the only gringos in the restaurant and it was full. 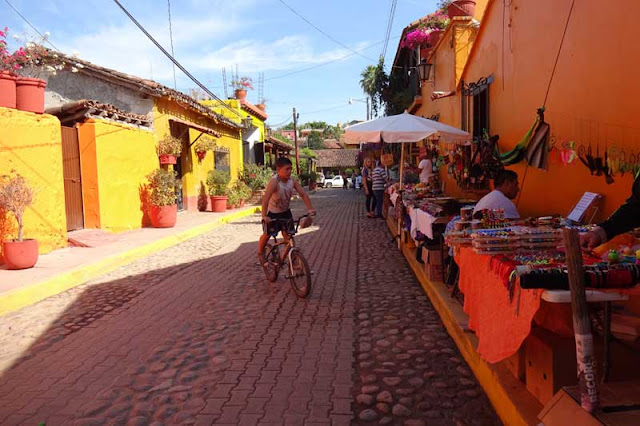 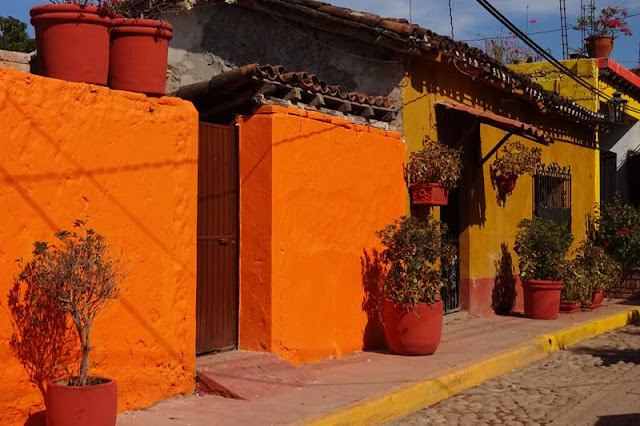 The eye glasses are drawn on his face with a black marker. 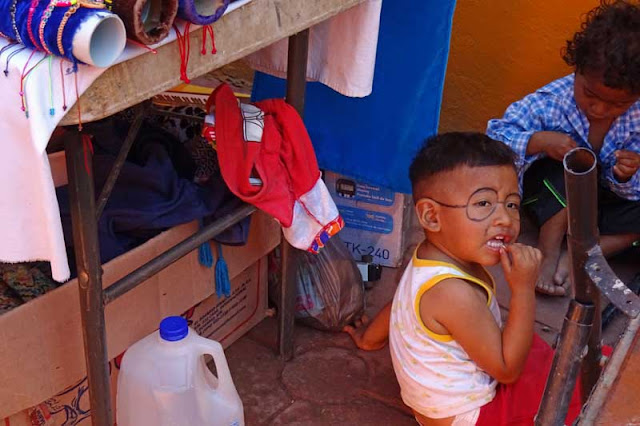 The horse that was looking in through the open door. 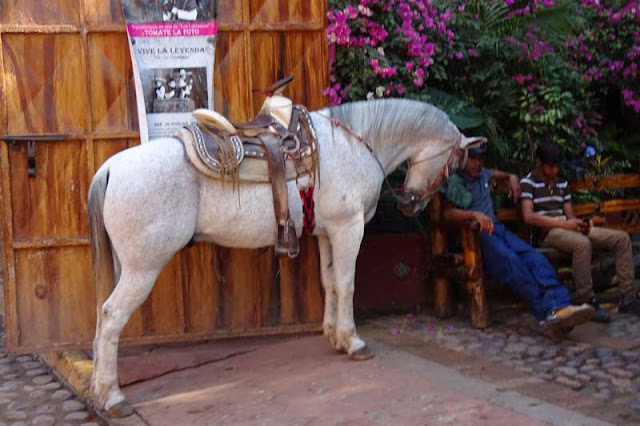 Trying to get out of town took a while. Lots of tourist cars parked on the main street. 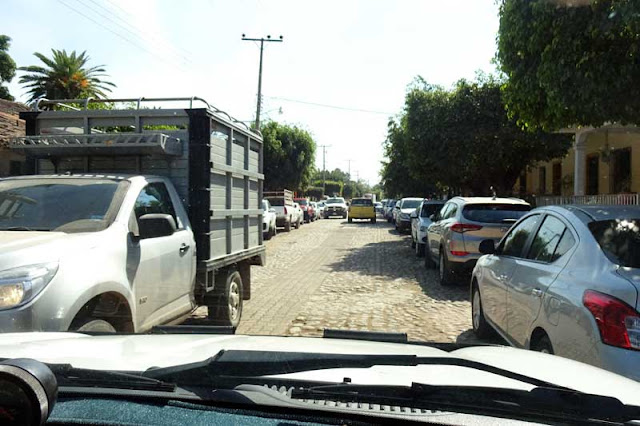 Going back out through the arch. As always a good time with good food and good friends there. 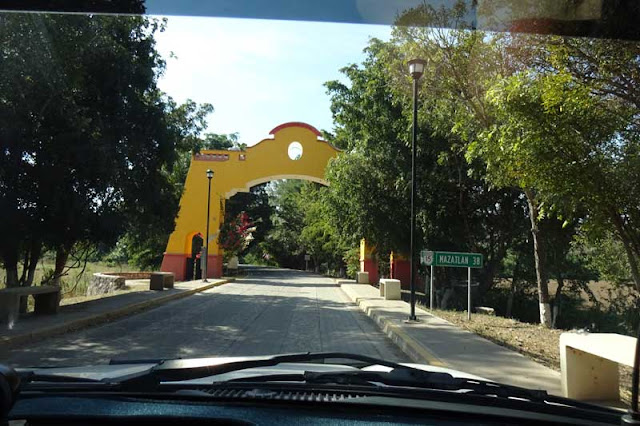 It is always much hotter inland. At the RV park it was only 80. 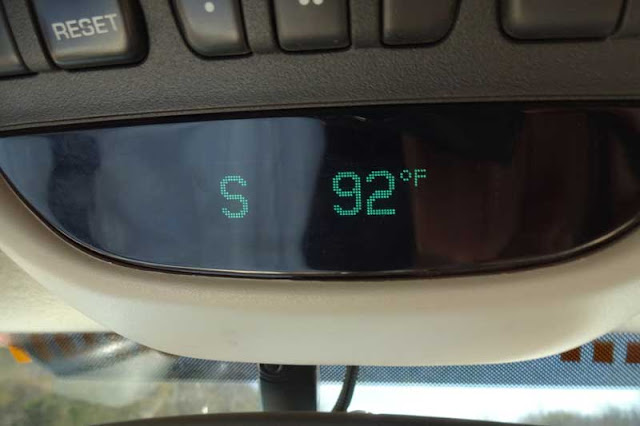 Thursday morning Bill had an appointment with Gilberto the artist - to talk about doing something on the Jeep. I have no idea what. At the present Bill is waiting for a sketch of Gilberto's idea. Here is Gilberto's face book page. Scroll down a ways to see some of his work. He also does body painting. 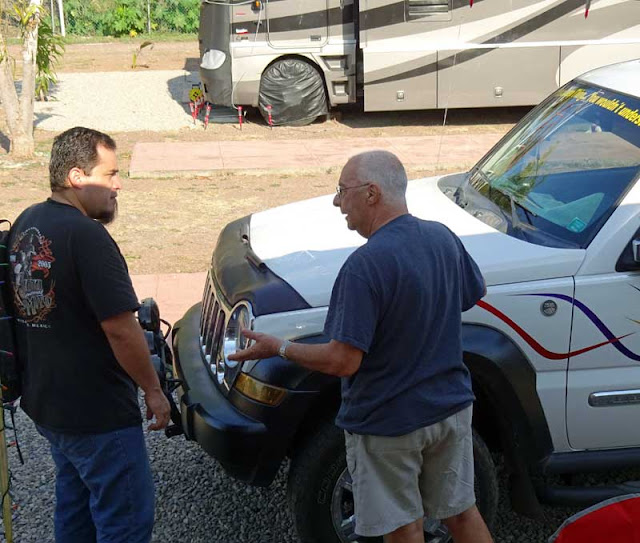 And Thursday early evening we went out to dinner at Fat Fish with even more friends from here. 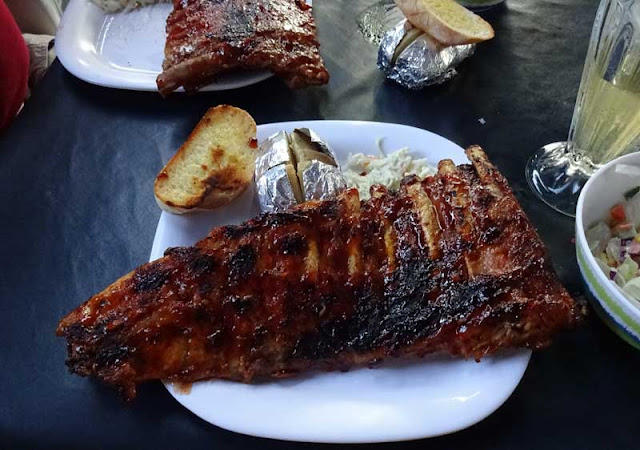 The griddle with the flames coming up. The big pan on the far right edge holds the spareribs. They boil them before grilling them. So tender and so good. 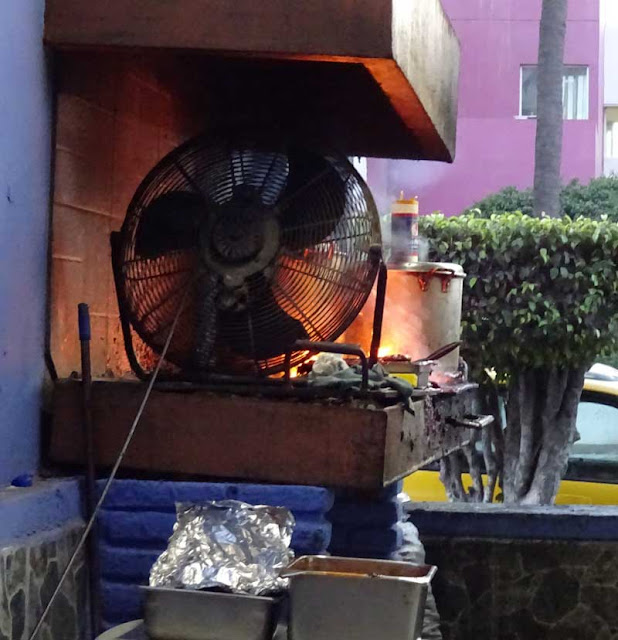 Paco, his wife, me and Bill. Another really nice meal and evening. I'm going to have to do a lot more walking if I keep eating so well. Friday, yesterday, morning Bill went out with Roberto to meet one of the men who will be running for president of Mexico next election. He said he had a good and very interesting time. I stayed home and cleaned.
In the afternoon we had to make a quick trip to TelCel to get more GBs. Took me a while to figure out we ran out so quick. One day last week I connected my cell phone to our wifi to check on something. Just a quick check and off. Well in that small amount of time somehow the phone went to "the cloud" or somewhere and downloaded every picture I've posted on the Internet since 2006! I don't even remember taking most of them. Don't know how or why it did it but it did. I very seldom use the phone to take pictures. But I sure have them now. Oh well. We are looking into getting cable Internet here - unlimited data and about the same price.
Posted by Carol and Bill at 11:52 AM

You two have a wonderful Christmas, and safe 2017
Mark

Great Pictures of a very colorful town. Merry Christmas to you and Bill.

Thank you Merry Christmas and a Happy New Year

Thank you and a Merry Christmas and Happy New Year to you and yours.

I am voting with Bill's idea. You should live in Mazatlan permanently You just find the best things to see and do. It is such a colorful, friendly place. I totally appeciate your pics. Seems like you have many fiends there. I would think it would be a lot more interesting than Las Vegas.